This is Day (looks at the calendar, does math, cries a little, asks for help) Seven of the Camp & Cult Blogathon! Because of the weekend and a little bit of distraction with some online shenanigans, I decided to hold off tweeting or posting any new submissions I’ve received this weekend until early Monday morning. They’ll get more publicity that way, at least I hope so.

If you have some ‘thon links that you don’t see on the master list by 9:00 AM Monday morning, please either comment here or drop me a note! Twitter has been wonky and I am almost certain I missed a couple submissions sent to me over there.

And now, today’s campy culty post: The Phantom Creeps. That may seem like a bit of a cheat, but really, if Creeps doesn’t count for the ‘thon then nothing does. NOTH. ING.

When we last left our heroes (for want of a better word), they had just wrecked their boat into a buoy because they were too busy punching each other and/or lying face-down in laps, while G-Man Bob once again decided to solve a problem by flying an airplane. And I know what you’re thinking: He’s going to crash that damn plane again. This is a man who has destroyed three cars, three airplanes and one train over the course of nine episodes, so he is due to create more unnecessary chaos.

That’s why when Bob starts spinning, twirling, flying sideways and trying to navigate by leaning over the edge of the plane and squinting a bit, it seems as though we are, if you will pardon the pun, right on course. 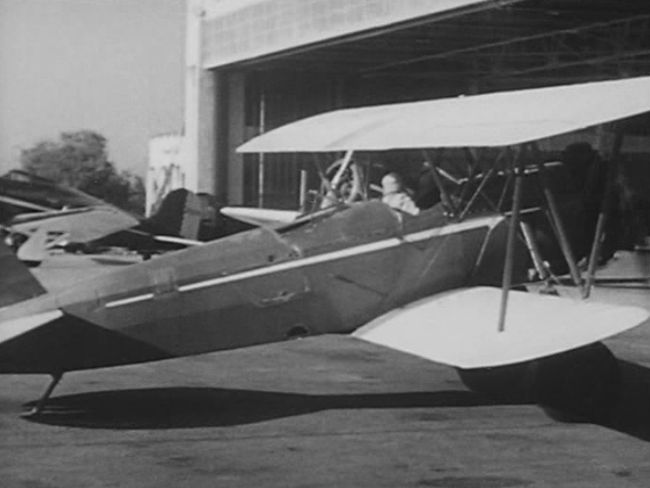 But then the guy lands the plane safely. What an asshole!

‘Course, he schmutzes it up by kind of wandering around a bit after landing, leisurely walking to the hangar to change and get a Coke and a few saltines, make a couple phone calls, then maybe browse through the latest GQ before finally sauntering out to the ocean to pick up his floating friends. 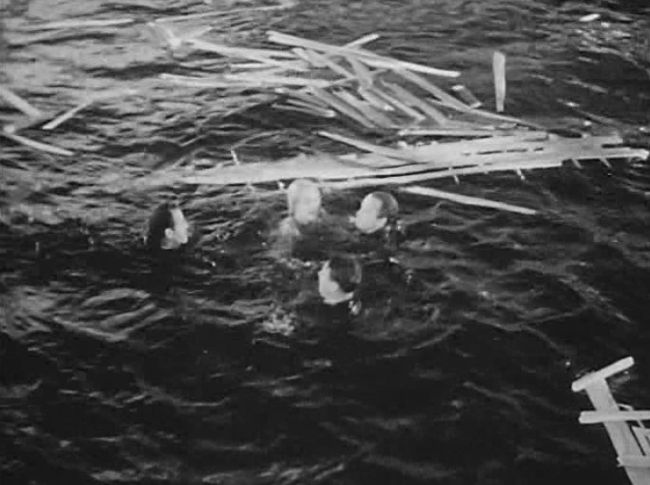 The Toomster is surprisingly conscious at this point, but he’s floating around in the chilly San Fransisco Bay amongst flotsam, jetsam, Plucky Girl Reporters and a slightly spazzy Eddie Acuff, so it’s not like he came out a winner.

Monk and Zorka, who you will remember were sitting in their boat tethered to the pier in plain view while everyone was politely pretending they were totally hidden, decide to get involved in these watery shenanigans. They approach the spies’ schooner to allow Monk to give them the meteor, still safely ensconced in the oldest still extant medical bag in the world — it’s inscribed “To Imhotep, you crazy bastard! Your friend, King Djoser” — but it’s all a pretext, just diversion to get InvisiZorka on the boat.

Now here’s where things get momentarily interesting: A moustachioed henchman tells Rankin, a.k.a. the henchman that looks like George Clooney, that he sees movement in the shadows when no one was there, but Rankin, who I thought better of until now, just says, “Aw, you’re drunk.”

And now, a very depressing moment: Here in Chapter 10, the spies figure out this whatsit they’ve been scrambling for possession of is a meteor. That’s right, they didn’t even know what they were going to all this trouble for until this very moment. Now! In Chapter 10! Only two episodes until the finale! I ask you, fine readers, does this make one fuck of sense?  And to make things worse, they bully Monk for a bit and have him take them to Zorka’s mansion, but it’s not really a Monk menacing, just a mild Monk manhandling. 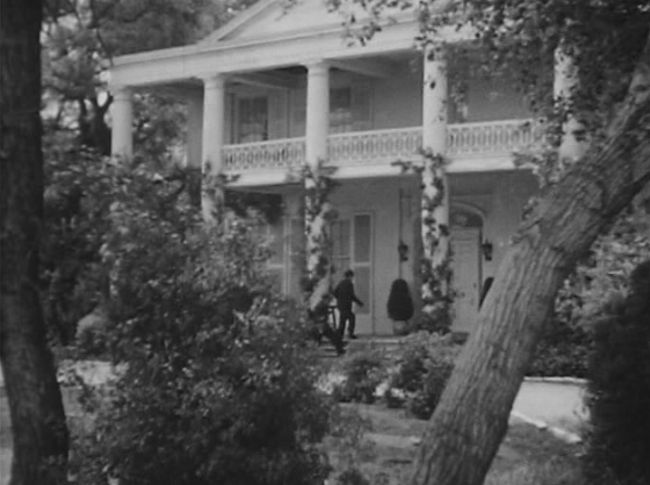 I’m not sure we’ve ever seen the mansion quite so clearly as in this shot. It’s so grown up around there that I wonder if this is on a backlot or if it’s a real home they just used the exteriors for. Some of the interiors were done on the MGM lot, as I mentioned way back in Chapter One, but otherwise I haven’t identified a single location. Sad, really.

Dr. Mallory just happened to be headed for the mansion himself, because in the state of California there are only like 32 people so it makes perfect sense for all these coincidental meetings to be happening. He races off to alert G-Man Bob who, I just realized, is maybe still fishing his friends out of the water? Or something?

Monk takes the spies into the first-floor laboratory while Zorka sneaks into the secret basement lair of secretness and implements some of his sinister inventions, all while spying on the spies, which is not only meta and ironic but poorly-planned because it involves him revealing a good 25% of his face through a huge door slit. 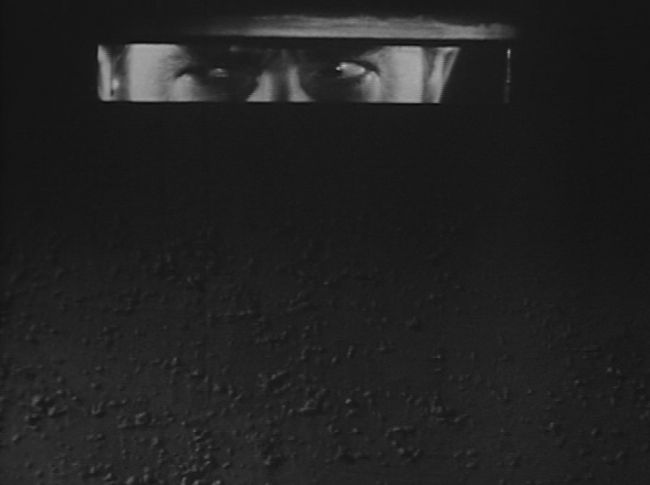 Caution: Momentary interestingness approaching! While chillin’ in Zorka’s manse, Rankin has a change of heart, and says he thinks Zorka might have the ability to go invisible. This garners him what I call “a Goulet” [1] from Mr. Henchman Von Moustache, plus Rankin also gets hollered at by the dignified spy leader. 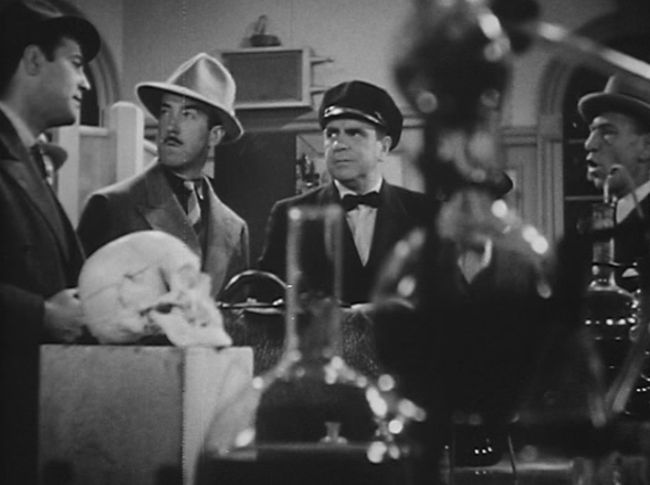 Okay, okay, I exaggerated for effect. Dr. Mallory’s assistant, G-Man Bob and Plucky Girl Reporter are all at Dr. Mallory’s, discussing really important things about the case, and obviously the San Fran Bay has some issue with pollution because PGR’s hair is longer and curlier than it was before she floated about for a few hours waiting on Bob to rescue her. Dr. Mallory calls in to his own lab to tell Bob that the spies are at Zorka’s mansion, so Bob runs off and tries to take PGR’s car without PGR, but she puts the kibosh on that idea, which gives Bob a serious case of bitchface. 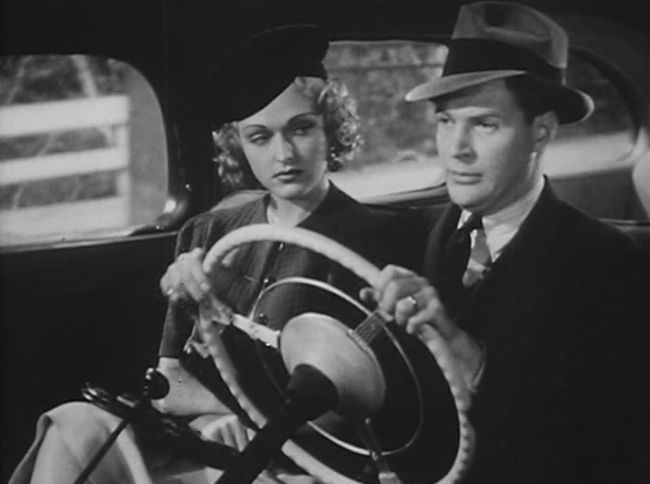 Back at the mansion, Zorka shines a flashlight through the slit onto Henchman Von Moustache, which disables him for a moment, as flashlights are wont to do. Then he deploys the Iron Man who picks Von Moustache up and tosses him aside, and finally, people care about this serial again. 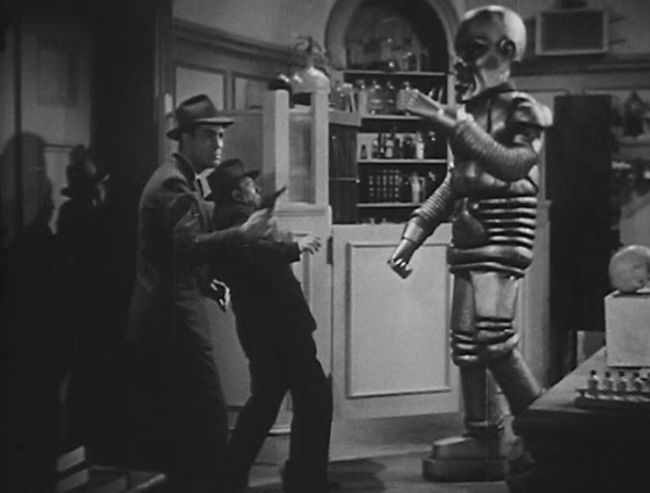 Remember this, kids, because there will be a quiz at the end of the serial: The spies shoot the Iron Man but mere bullets cannot stop him!

They can stop Monk, as Rankin discovers. Monk gets shot in the back again which is exactly what’s gonna happen when you’re running like a damn coward all the time. Rankin grabs the medical meteor bag and zips past Iron Man, who is an enormous menace but not the swiftest robot in the world. As the spies drive away they pass PGR and Bob — remember, only 32 people in California — who U-turn and give chase.

Now, at some point Henchman Von Moustache re-joined the spies, though I would swear that he was the dude tossed into a corner by the angry iron robot earlier. 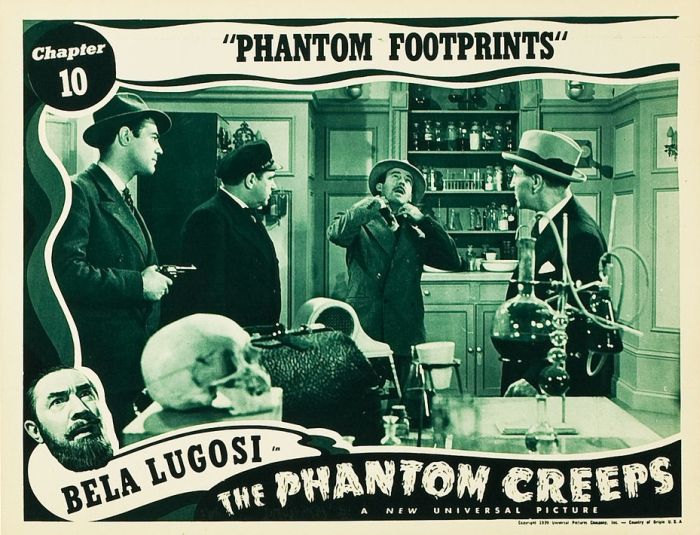 This is the lobby card pic of Von Moustache being subdued by a flashlight beam (hilarious). The guy that gets knocked out by the flashlight is the guy who goes flying after the Iron Man gets hold of him. He’s left behind while the rest of the henchmen run off, so if it was Von Moustache, there is no way to explain why he is now driving the getaway car. I have noticed, however, that during the scenes with multiple henchmen, extras seem to come and go. Whether this is because of shooting schedules or simply not putting all the henchmen in the frame, I do not know. It is confusing, however, because just as you think you know which henchman got knocked out, punched out, tossed out, or chewed out, you realize you had no idea at all.

Regardless, Von Moustache is driving at speed toward a train at night, and as you know, Phantom Creeps was filmed in Incredibly Dark-O-Vision so you can’t see much of anything except, er, dark: 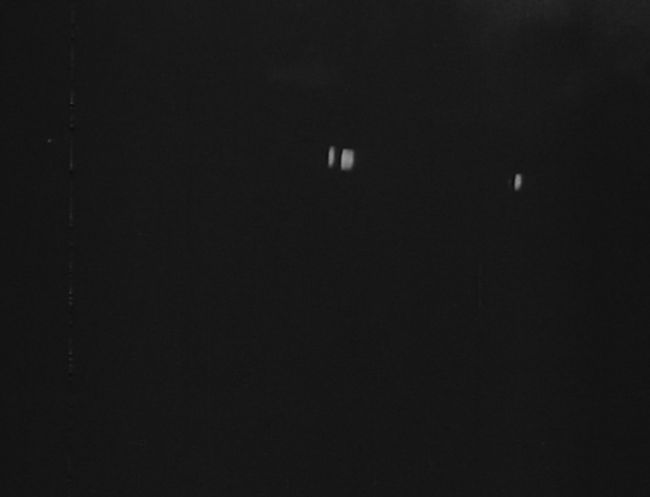 At the depot, Von Moustache boards the train with the magical meteor bag as Bob and PGR follow suit. The Zorkmeister doesn’t arrive until the train departs, so he heads to a control station in an attempt to stop the train by remote lever. Honestly, I don’t know what the whole lever thing is; there is a set of false levers sitting on a desk, attached to nothing, and if you pull one of them it derails a train somewhere down the line.

Things start to pick up again as the train speeds along with Bob and Von Moustache in a fist fight in a passenger car, while Bela’s stunt double pounds on another stunt double in a fedora at the control station a few miles away. 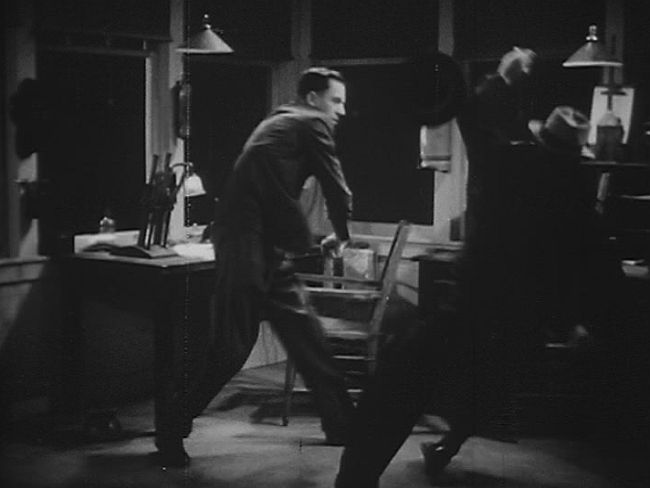 Seriously, the double is about 4-6 inches taller than Bela, 15 pounds thinner, different hair, with a suit that’s not exactly the same color… and they linger on his face without trying to disguise that he’s a double. However, the double’s nose gives him a very similar profile to Bela — more similar than Ed Wood’s chiropractor’s, at least — so it’s not entirely hopeless. Just, I dunno, roughly 97% hopeless.

Bela’s double gets knocked into the levers and the train is derailed, flying off a cliff and tumbling hundreds of yards into the dark of a fast-flowing river below. As the episode ends, there is no massive explosion, and as you will recall from previous episodes, if the meteor is mega-jostled it explodes. Either Von Moustache doesn’t have the meteor or the continuity is fucked again. Guess we’ll find out next episode. 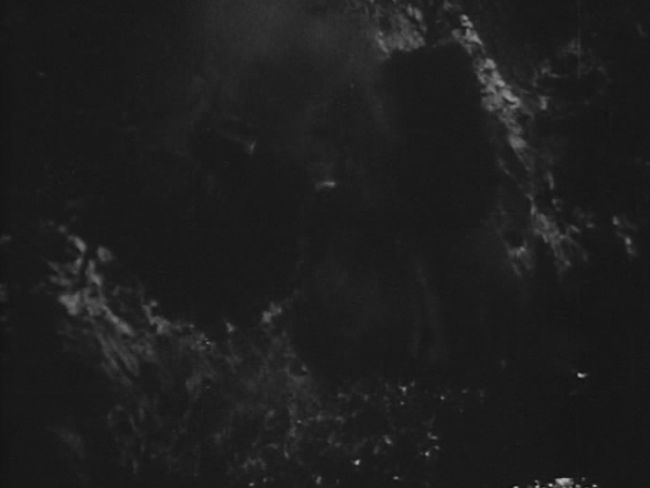 Mostly Dark Theater Presents: A train falling into a river.

So let’s tally the final score, shall we? Regis was fished out of the briny early on and given almost nothing to do for this episode (boo!), Bob managed to land a plane without losing a wing or two (yay!), but Rankin’s head henchman status is being usurped by Henchman Von Moustache (boo!) and we haven’t seen an ArachnoBlam in two episodes (boooooo!) We’re closing in on the exciting [2] finale and the serial is certainly upping the budget for HO scale model trains to toss off of tiny toy cliffs, but otherwise, I’m underwhelmed.

Still, I have seen this serial before, and I think I can promise with at least some certainty that the finale reaches a level of complete fuckery you probably are not expecting. I mean, like, the kind of fuckery that can cause international incidents.

[1] In Naked Gun 2 1/2: The Smell of Fear, Robert Goulet plays bad guy Quentin Hapsburg. Every time Drebin (Leslie Nielsen) says something stupid (often) Goulet gets the most hilarious confused look on his face: 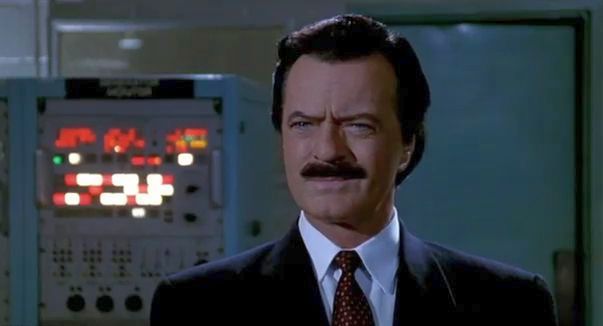 It is the quintessential squinty-eyed what-the-hell look, and I defy you to find someone who can do it any better. That is why, for two decades, I have called this look “a Goulet.”