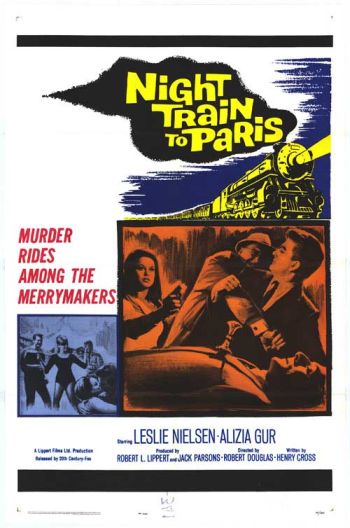 Are we dead? Did the Mayan spaceship blow us up on the winter solstice? No? Then sit your big butts back down on those couches and start watching movies like God and Greyhound intended!

Here are some films on Fox Movie Channel, Sundance and TCM for the month of January that you might be interested in. Remember, these movies may be edited, time compressed, in the wrong aspect ratio, have commercial interruptions, or contain subliminal messages compelling you to toss articulated bodies off cliffs as part of a series of elaborate insurance scams. You know how it goes.

Night Train to Paris (1964)
January 1, 4:50 AM (early morning)
Leslie Nielsen as a retired secret agent on one last mission in Paris. This gets horrible reviews, so beware!

Heaven With a Barbed Wire Fence (1939)
January 10, 4:50 AM (early morning the 11th)
A New Yorker’s adventure on the way to Arizona to settle on his newly-bought land. Directed by Ricardo Cortez and starring Glenn Ford in his first featured role, and Jean Rogers, Raymond Walburn, Marjorie Rambeau, Richard Conte, Eddie Collins, Ward Bond and Dalton Trumbo. (It’s also on YouTube here, for those of us who don’t get FMC.)

Mommie Dearest (1981)
January 1, 10:00 PM (again on the 2nd, twice on the 13th, twice on the 19th)
The first film in a two-way tie for this month’s What The Shit Is This? sweepstakes! If you haven’t seen Mommie Dearest, you are in for a treat, and by “treat” I mean “terrifying hour and a half of cinematic cheese.” Faye Dunaway plays mid- and late-career Joan Crawford in this flick based on the tell-all book by adopted daughter Christine. Now, I’ve read the book, and it didn’t read as campy as the film turned out, because the book elaborates some points that I’m reasonably sure the screenplay deliberately left unexplained. Vague is funnier, as you know. Dunaway is completely out of control in this performance, intentional emotional instability in an attempt to mimic how Crawford allegedly acted. Stars some great character actors, like Steve Forrest, brother of Dana Andrews and permanent fixture on TV from 1950 through 1999 inclusive. Contains hilarious lines and horrifying child abuse and is probably about as truthful as a version of the Titanic disaster where everyone is saved by an adorable, anthropomorphic super otter.

Amreeka (2009)
January 6, 6:00 AM (also twice the 14th)
The troubles of a Palestinian woman and her son who move to the U.S. to live with her sister and family in Illinois. Sundance shows this quite a bit, and I finally got to watch it last month, and I recommend it. Low-key but delightful and surprising.

Buena Vista Social Club (1999)
January 21, 11:00 PM and again at 4:00 AM
Documentary chronicling Ry Cooder’s assembling of older musicians from Cuba, to record an album and tour the world. Nominated for an Oscar. 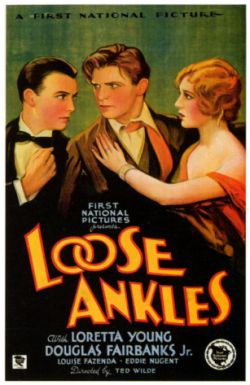 Forty Naughty Girls (1938)
January 3, 5:30 PM
The final Hildegard Withers mystery, with Withers played by ZaSu Pitts. Check out the review Leonard Maltin gave it: It received on of his infamous (and hilarious) bombs!

Tarantula (1955)
January 4, 9:30 PM
BBFF Ivan at Thrilling Days of Yesteryear wrote up a terrific article on Tarantula for the 50s Monster Mash Blogathon last year. This B-movie creature feature comes in the middle of a whole night of ’em on TCM, starting with Creature from the Black Lagoon (1954), then Tarantula, followed by The Incredible Shrinking Man (1957) and finally It Came From Outer Space (1953). I note Tarantula here only because of the hilarious TCM description: “A scientist’s experiments to cure hunger create a giant tarantula.” Well, yeah, you try to cure world hunger, that’s gonna happen. 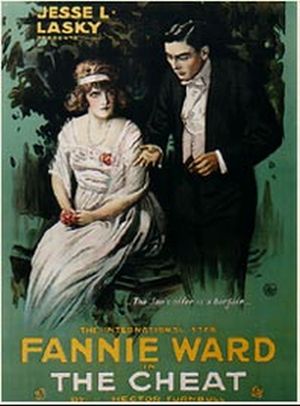 The Cheat (1915)
January 6, midnight
Cecil B. DeMille’s overwrought silent about a society woman who makes a deal with a sinister man to cover her debts. Starring Sessue Hayakawa. Remade in the 1920s with Pola Negri, and as an early talkie with Tallulah Bankhead.

The Dragon Painter (1919)
January 6, 1:00 AM (early morning the 7th)
The second flick in our Sessue Hayakawa double feature about an artist who believes a beautiful woman has been turned into a dragon.

The Spirit of the Beehive (1973)
January 7, 10:30 PM
Two girls see Frankenstein, then decide to search for the monster, believing it to be real; similar to a significant plot point in Heavenly Creatures. 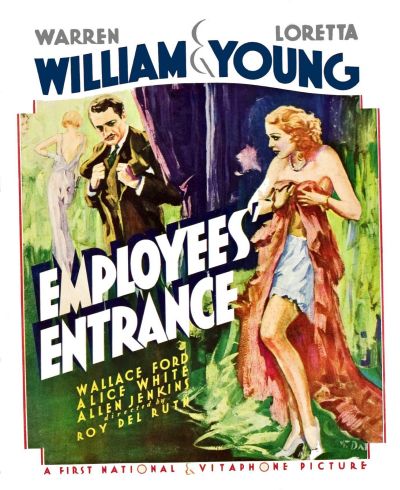 January 9 and 10: More Loretta Young
There are several pre-codes tonight that you do not want to miss!

8:00 PM Employees’ Entrance (1933) – Very similar to Skyscraper Souls, but still very much its own movie. If you like pre-codes, you will want to see this.

12:15 AM Midnight Mary (1933) – Features one of the most pre-code pre-code scenes ever. You’ll know it when you see it. Whew. The rest of the Loretta Young pre-codes are:

Old Acquaintance (1943)
January 10, midnight
Bette Davis and Miriam Hopkins loathe each other for 110 minutes, and it is a delight.

Each Dawn I Die (1939)
January 11, 7:15 AM
My favorite Cagney movie in one of the best acting performances ever captured on film, and I will argue this point strenuously if I have to. Cagney is a hard-hitting investigative journalist who turns bitter when framed and sent up the river. Co-stars a terrific George Raft. Turns into violent melodrama toward the finale, but not many movies in 1939 didn’t. The first of several films with George Raft this morning; in order: They Drive by Night (1940), Manpower (1941), Background To Danger (1943), Johnny Angel (1946), Nocturne (1946), Race Street (1948), and A Dangerous Profession (1950).

Les Miserables (1935)
January 13, 10:00 AM
TCM has shown this version of Les Miz several times over the last year, but if you haven’t had a chance to catch it yet, definitely try to. It’s a bit thinned down, as one would expect given the shortish length and year it was made, but March is terrific and Charles Laughton is sublime. 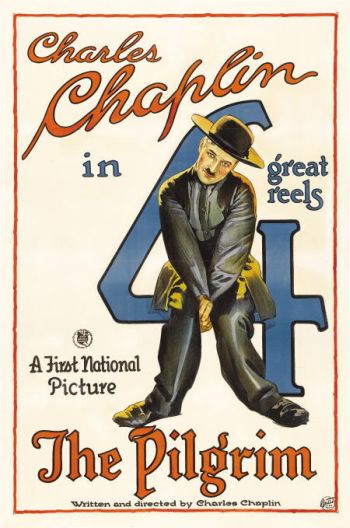 The Flight of the Phoenix (1965)
January 24, 2:45 PM
Melodramatic in that alluring The High and the Mighty way, this is a ridiculously entertaining yarn about the survivors of a plane crash racing against time to get their plane repaired. Contains tons of great actors, lots of Lawrence of Arabia-esque music and one hell of a plot twist — no one spoil it in the comments! It’s also co-starring Ian Bannen, an actor I’m just now realizing had a pretty huge career, though one rarely hears about him nowadays.

Under the Yum Yum Tree (1963)
January 24 (early morning the 2th), 4:45 AM
This month’s co-winner for the coveted What The Shit Is This? award. Misogyny was a big fad in the 1960s, and no one personified the ugly, sexist, proto-rapist bachelor more than Jack Lemmon, who managed to helm a champion trifecta of revolting films in the mid 1960s: Under the Yum Yum Tree (1963), Good Neighbor Sam (1964) and How to Murder Your Wife (1965). Yum Yum Tree is probably the worst, though it’s a toss up, really. People often say “it was a different time” when it comes to the sociopolitical context of films like these, and to that I say, “Bullshit, my good chum.” Men who acted similarly to Lemmon’s characters in pre-codes — Ricardo Cortez, anyone? Warren William? — were portrayed as vile and often died at the end of the film. Just because that sort of behavior became more accepted in the 1960s doesn’t mean it was no longer vile. It was, but the social context changed, and there was a brief period of time where men thought The Pill meant liberation for them rather than for women, and by “liberation” I mean “it’s safe to get women drunk and take advantage of them when they can’t consent because now they can’t get pregnant, yay.” So anyway, long story short, Under the Yum Yum Tree is on TCM this month. Even Jack Lemmon didn’t like the film. Enjoy. 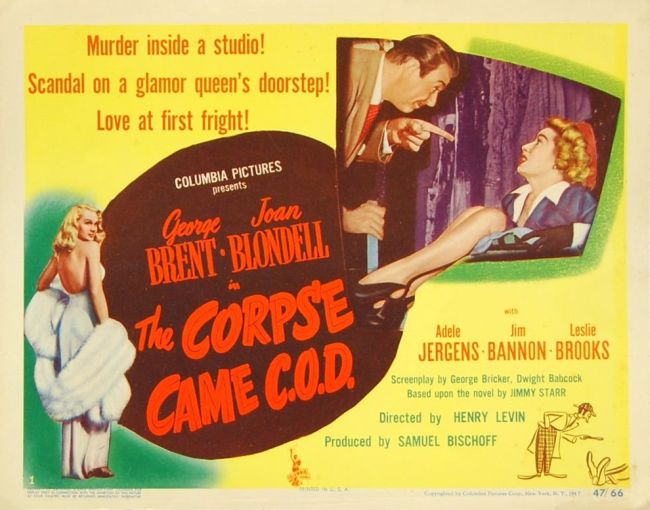 The Penalty (1920)
January 27 (early morning the 28th), 12:45 AM
Lon Chaney silent about a criminal mastermind wanting revenge against a doctor who amputated both his legs. Even though I’m in the middle of a two-year-long Chaney burnout, I urge you to see this flick if you haven’t yet. It’s the same-ol’ same-ol’ from Lon and his ugly-on-the-inside-equals-disabled-on-the-outside shtick, but it’s still a good film. 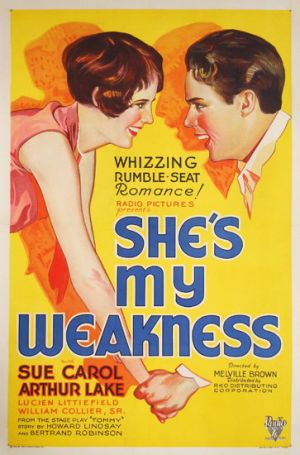 Point Blank (1967)
January 31 (early morning the 1st), 2:45 AM
Terrific John Boorman flick about a criminal bent on revenge after being left for dead in the abandoned Alcatraz.

If there are any films coming up in January — any genre, any channel — that you want to mention, please feel free to do so in the comments!