The Phantom Creeps was filmed more than three decades before I was born, yet I feel somehow responsible for the frank, unabashed boredom in the slower episodes of the serial. There’s some guilt for subjecting you fine people to these terrible things, is what I’m saying, yet not enough guilt to make me stop. I will not stop. I can not stop. It is a disease, a virus with no known cure, a fever that must run its delirious course. But we are at last in the final stages, my friends, and for that we can all be thankful.

When we last left our heroes and villains, they were languishing in some stock footage of a burning building, at once spectacular in scope as well as hilarious due to being so dated and overused. In re-watching this episode I discovered that the spies’ security guard locked in a closet by G-Man Bob and Toomey in the last episode was never let out, so apparently he dies a horrible death, thanks to our heroes. Nice work, guys. Just look at this, wouldya? The blocking here is completely unacceptable. Everyone is in a single-file conga line while watching the action off screen, which is the exact thing we were told not to do in high school theater class, where I set the acting world aflame as Viney, the maid in “The Miracle Worker.” My dipshit Kansas high school teacher with a mental illness and predilection for banging her students knew this simple blocking rule, which means at least one person on the set of The Phantom Creeps must have known it, too. C’mon, guys, you’re not even trying.

The most observant of the three spies is not only very obviously blasted on whatever hooch the crew was stashing behind the props, he has seen Zorka sneaking off with the wooden crate containing the magical mysterious meteorite of mystery and magic. The trio jump into their 4-ton 1939 Cadillac Series 90 (with that delicious hood ornament still intact) and give chase.

Speaking of, I got a little obsessed with the cars in this chapter because this is one damnably boring episode. The spies have that lovely Caddy: And Plucky Girl Reporter is driving what I think is a sporty 1939 Plymouth De Luxe: This is Zorka’s car, which the IMCDb says is a 1929 Cadillac: Well, that’s enough fun, gotta get back to the Creeps, where we find someone on set apparently was paying attention, at least to the editing.  After eight episodes that began with a solid block of three to five minutes of recaps, they do a little something different this week and split the recap into smaller, more easily-digestible chunks and puree it in with new footage. That’s why, after Zorka and the three dimwits speed off, we go back to the burning building stock footage.  G-Man Bob is valiantly trying to toss an unconscious Regis Toomey out of a window, which is, of course, your basic standard procedure on how to handle an unconscious Toomster. This is less amazing than it sounds, or perhaps more amazing depending on your point of view, because the stock footage has progressed to the point that the burning warehouse is completely consumed and the outer walls are collapsing into the bay. This once proud pillar collapses dejectedly into the bay. Moments later, his wife reassures him that it happens to everyone on occasion, it’s no big deal, they can just snuggle.

It’s difficult to suspend the proverbial disbelief in this scene, something apparently even the directors knew, so they attempted to mitigate the issue — and this is the less and/or more amazing part — by preventing Bob and Toomie from escaping until the walls collapse, as though an enormous, flaming, four-storey building collapsing on top of you merely provides a hole through which you may gently exit. Thus, the building collapsed, and Bob and Toomie were tossed into the bay along with a couple of hastily mocked-together window frames. They are rescued and Reeg, in a rather disturbing development, shows signs of serious injury. He’s carried off by a bevy of strong lads, presumably to a doctor, but I think maybe they need to check for Kryptonite because no conk on the head and brief swim in the sea is going to take out Regis Toomey like this. I will not have such shenanigans, movie serial.

Back at the car chase, we’re treated to a hilarious bit where the spies apparently shoot Zorka from behind. He keels over and the car careens off the road to what looks like the carpark of a delightful picnic area. As he veers off the road, we see that somehow the spies were able to shoot him in the front passenger side wheel well despite being 20 yards back and to the left, so clearly a magic bullet was involved. Since the shot-up wheel well we’re shown belongs to an entirely different car, it looks like some magic stock footage was involved as well.

But it gets better: Zorka was only pretending to be injured, so he busts away from them again, invisiblates, conks someone on the head then takes their gun. As he re-invisiblates… Zorka disappears, but the gun he is holding does not. Truly remarkable. How does the Invisiblator know to make his clothes invisible but not the handgun? By science, that’s how!

Two of the spies run off and are seen by Plucky Girl Reporter who is quite literally sitting in her car across the middle of the road for no reason. A third spy, the drunkest of the lot and rapidly becoming my favorite character, is captured by Zorka, who for some reason ArachnoBlams him even though he’s only two feet away and could quite easily be shot, pistol whipped, elbowed in the ribs, tipped over, covered in a blanket, or any number of other, less wasteful things. Meanwhile, Dr. Mallory has got the smugs because he’s not the one who lost the meteorite this time.

After a brief Monk menacing that is really more of a Monk mild scolding, the spies end up back at the pier, or maybe a different pier, who knows, it’s some place next to the water and ships are sailing. PGR sees the spies take the meteor to another yacht and alerts everyone, who meet up with her at the pier. When Toomey arrives, PGR is obviously concerned for his health, and truth be told, he is walking like a man who has been hit on the head many times per week for the last, oh, let’s say eight weeks or so. Yet I cannot be made to believe Regis Toomey is seriously injured, not after everything we’ve been through together.

Because I am distracted by things other than the plot this week, here’s another tangent: PGR’s dress looks very similar to one I had when I was in high school. There was a bit of an Old Hollywood deco/moderne theme in fashions and decor in the 1980s, and one of my favorite dresses was nearly identical to PGR’s here. It was covered in polka dots and made out of a space-age polymer, but otherwise matched PGR’s, even down to the boutonniere: 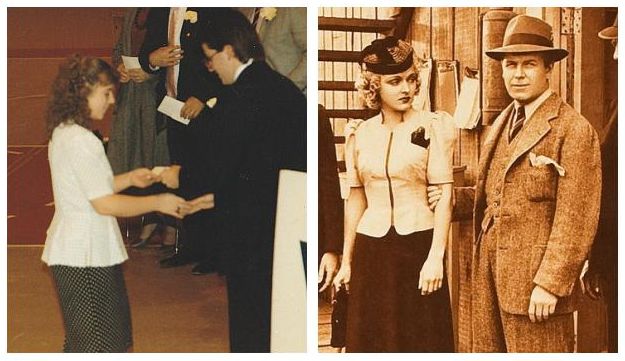 Please ignore my spiral perm and the teacher’s spiky ‘do. Sure, it was 1989 and we were stupid, but you probably were too. Note PGR’s concerned look at a wounded Regis in the lobby card detail on the right.

Back at the show, G-Man Bob gets into another plane. Oy with the planes already! Who would give this man a plane at this late date? Psychos? Idiots? Insurance scammers? Wait, do insurance scammers own lots of planes? The must own lots of planes because nothing else makes sense at this point. Just… just whatever. Just fly your plane, Bob, and leave me the hell out of it. Hand to God, Bob, I am done with this.

Toomie, PGR, Eddie Acuff and other assorted people I don’t care about get into a boat to approach the spies’ yacht, because that plan worked so well last time. Monk and Zorka arrive, too, and sit in a boat that I don’t think ever launches away from the pier. The spies see Bob’s posse floating around but no one sees Monk and Zorka, even though it’s a clear and lovely day and they are not even trying to hide. It’s all very silly and now you know why I was staring at the cars and the dresses for these 18 long minutes.

G-Man Bob’s cunning plan is to drop a note onto the yacht threatening to blow it up if they don’t turn over the meteor. Now, despite being nowhere near the yacht, the good mad doctor Zorka somehow guesses at the contents of the note. He laughs at Bob’s ultimatum and declares it a bluff — bombing the yacht means bombing the meteor, which would result in a massive explosion that would flatten the entire coastal city.

But Dr. Zorka, like dozens before him, has underestimated Bob’s stupidity. Bob does indeed bomb the yacht, nearly hitting it a few times before the spies send out a dummy bag pretending it has the meteor in it. Bob looks really fucking smug in this sequence, which is completely unjustified because, if you will recall, the G-Men have no neometer anymore since the completely useless Dr. Mallory lost it. No neometer means no idea the spies have sent over an empty bag; the neometer was their only chance at detecting this, because every last one of these agents slept through Things The Enemy Will Do To Trick You class in G-Man School.

As the transfer is made, the spies attack the G-Men and PGR and conk The Toomster on the head. An unconscious Toomie falls face first into PGR’s lap and knocks the throttle forward, and she is unable to move the lever because Reeg’s body is in the way. Pardon the poor quality of the screen capture, but I simply had to share this moment with you. I will not lie to you good folks: Regis Toomey face down in Dorothy Arnold’s crotch got my attention, and fast.

Lots of fast-motion fighting occurs as the boat speeds toward things and barely misses them, PGR having difficulty steering with Reeg down there doing whatever it is he’s doing, and I shall not speculate because I am a lady, and ladies don’t fucking talk about shit like that.  After what passes for excitement in this serial — the random henchmen falling off the boat as it dodged floating whatnots was pretty funny, I have to admit — PGR’s meager sailing skills betray her and the boat finally crashes into a buoy.

We already had two B-level character actors floating about in the water this episode, and it looks like we’re gonna revisit that delightful theme next time in episode ten. This is an episode which promises more InvisiZorka, more henchmen that look like George Clooney, and — just possibly, I say in a teasing fashion — the return of the Iron Man. So please, join me next time for another edition of Why The Hell Am I Doing This Theatre.