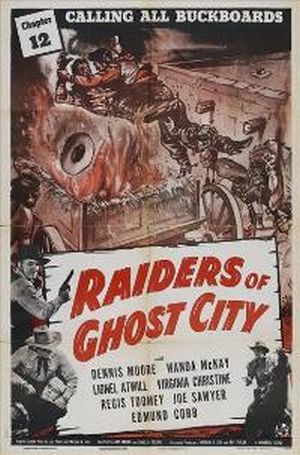 Last week on Raiders of Ghost City! Steve grabs some papers off the dead Rawhide and discovers Alex is the leader of the nogoodnik Prussians. Meanwhile President Lincoln has the poor taste to get himself assassinated, which leaves the U.S. Army in the lurch, as he was scheduled to speak with the Modoc tribe to try to keep the peace. Between Lincoln’s untimely death and a Prussian provocateur in the Modoc’s midst, tensions are high, which is why Idaho Jones, with neither the ability to speak Modoc nor any experience as a diplomat, rides right into their village to do… something. The provocateur, named Burke because of course his name starts with a “B,” has Idaho’s legs attached to some bendy branches which will ostensibly rend him in twain once they are released. But Cathy sees the peril he is in — it’s a lot of peril — and rides for help.

Body count so far: Jeff-Jim, Capt. Clay Randolf (noooo), Count Manfried von Rinkton, Rackerby, Bill, Hank, and Rawhide. And how many of them have had their stuff rifled through by Steve after their deaths? All of them, except Clay, but only because he just handed his shit over to Steve’s friends before he died to save them the trouble of digging through his pockets. Let’s see how many more people we lose in this episode, shall we?

Follow along here on YouTube, if you dare. But you probably won’t, because we’re almost done with this serial already, I mean really.

This chapter is titled “Calling All Buckboards,” and for those of you mired in the 21st century, a buckboard is a type of wagon. You can see one here in a screen grab from Chapter 1. It’s behind all the dust, so if that’s not a clear enough pic, try this terrific picture from the Kirchgraber family website. 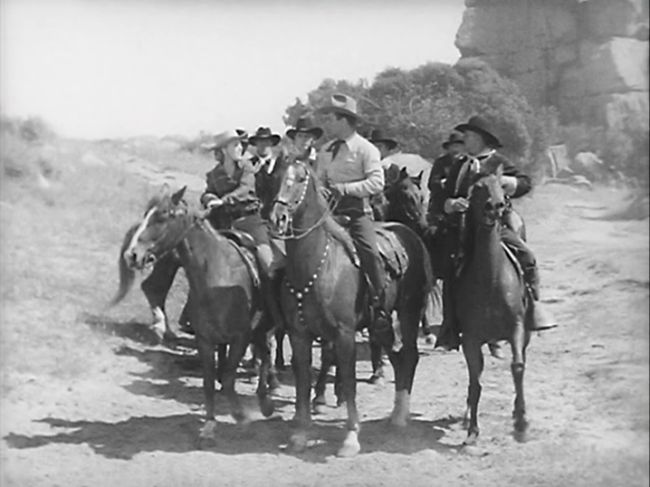 Cathy meets Steve and the soldiers on their way to the Modoc village and tells them Idaho is in danger. They arrive just in time to save him, though it’s a bit of a cheat since we saw the lashes cut loose in the last chapter, while in this chapter, the Modoc were shot before they could cut through the ropes and unleash the fury of a wee little sapling. 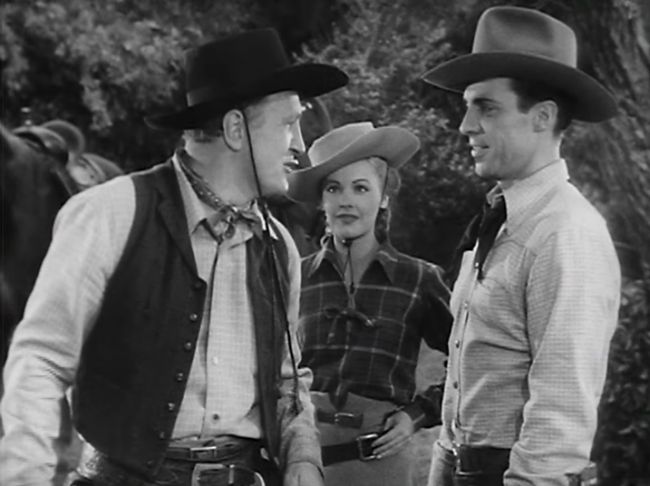 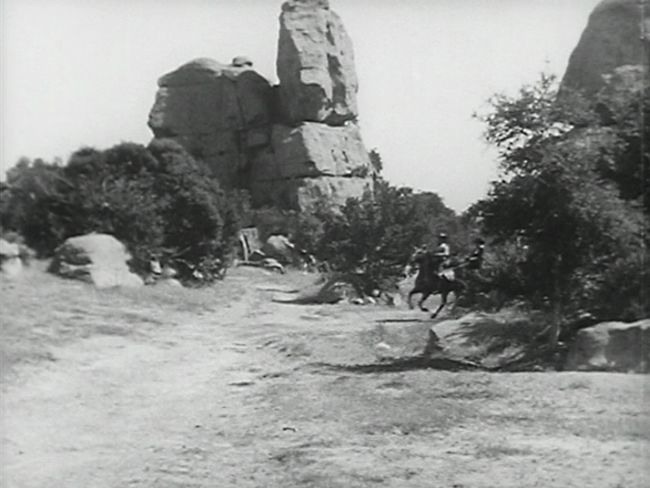 Early on we see two classic Iverson Movie Ranch rocks, which you may recognize from the scenes set in Apache Wells in Stagecoach (1939). They both go by numerous names, but are best known as Tower Rock on the left and The Sphinx on the right, in an area dubbed “Garden of the Gods.” 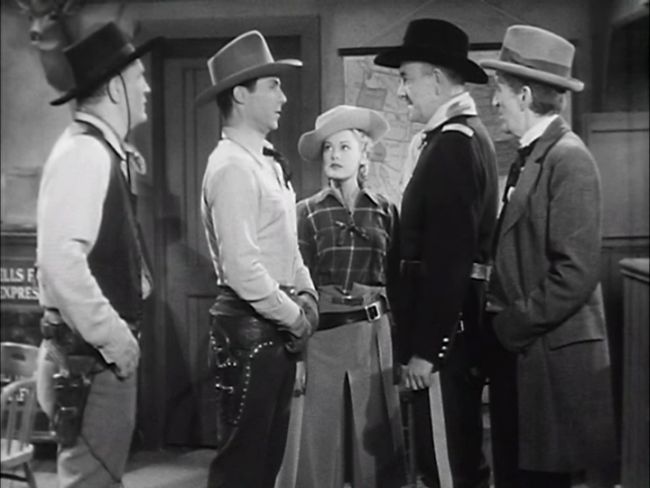 After everyone returns to the Wells Fargo, Steve hatches a plan to use miners, apparently guys who used to work the mines underneath Ghost City, to help them chase down the bad guys. It’s possible these miners were individual prospectors; it’s not made clear who they are or what interest they have in this situation. Whoever they are, this is not a half bad idea, since the mines have been taken over by the Prussians and the miners would be the best people to navigate the area. The thing is, they hash out their plan… 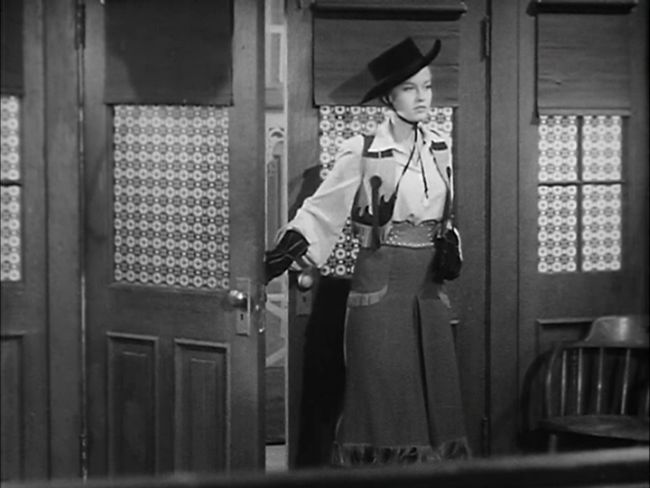 while Trina is right there, and at least two of them can clearly see her. But she’s not that smart, because after hearing their plan, she asks them if there will be a stage out of town any time soon, which makes them all suspicious.

I neglected to mention this in the last episode, but now that we’ve reached the Prussians’ end game, Trina has changed into this kicky little number. It’s not period appropriate in the least, but it’s a nice change from her plaid and her hoop skirts. 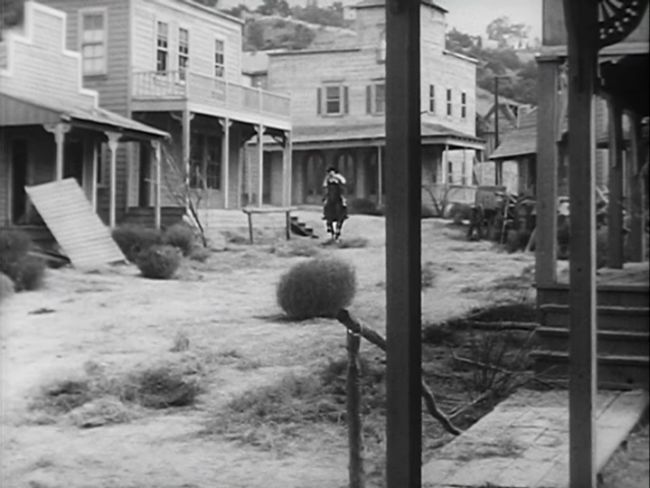 Hey, we get to see Ghost City again! It’s more of a ghost hamlet than a city, really, but the set is nice and I like to check in on it every once in a while. This is Trina, riding into the abandoned town to check on the mines, where Alex and some of the henchmen are faffing about. I wish I remembered what specifically Alex is doing down there, but I don’t, and I’m not entirely sure we were ever told. Trina warns them that the mining hoards are headed their way. 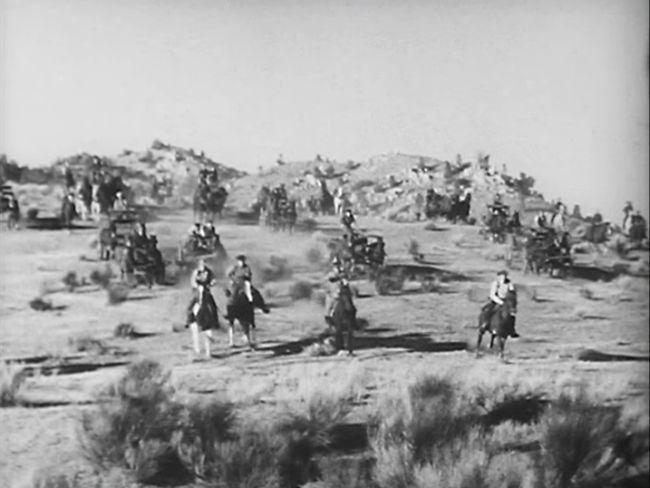 The miners, as represented by footage from another film, are heading out to the Ghost City mines. You can see several people in this footage looking behind them as though they were being chased, which I’m sure is what was happening in the original film this was taken from, and one man even wipes out on his buckboard in the rush. In real life, no one would put themselves in harm’s way on Steve’s say-so, but I am of course stating the obvious.

The editing of this footage is done well. We cut away from the larger group to a scene where one horseback rider and one wagon are just going off frame, giving the impression that they are part of the larger group, and our heroes are bringing up the rear. It means Universal only needed a few actors and stuntpersons for their own footage and could just let the pilfered scenes do all the heavy lifting, and unlike, oh, say, The Phantom Creeps, they aren’t pulling any bizarre flipped-footage shenanigans to try to make it work.

As the miners attack the henchmen in Ghost City, Burke the provocateur tries to convince Chief Tahuna to go into the ghost town and help the Prussians out, saying the miners had stolen gold that belonged to the Modoc. And the chief agrees, saying he attacks all enemies… 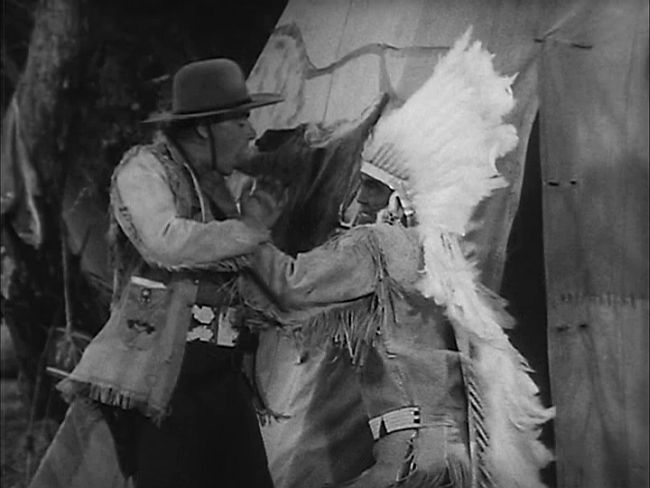 at which point he grabs Burke, throws him down on the ground and starts chopping the shit out of him with his tomahawk. Gross. Add one to the kill list, folks.

More stock footage is deployed, this time of a Native American tribe on the warpath at night, in an area near Devil’s Tower. They’re attacking a town with torches and guns as the White settlers hide behind barricades and try to defend their town. To integrate this into Ghost City footage, about 5-6 miner extras are seen barricaded in the street with Steve, Idaho and Doc in a separate barricade, plus several henchmen extras in the stables just above the mines. Every so often, 2-3 horsemen ride in front of the Rondavoo building and a few frames is inserted into the stock footage, plus the scenes from another film are used in a blue screen with the cast from Raiders in front. Again, it’s all done to make it look like the hundreds of extras in the borrowed footage are actually part of the Raiders cast. It works pretty well, though the editors reuse some footage out of desperation or sloppiness, or because they’re in a rush to get to the commissary and have a tuna melt with Regis Toomey. 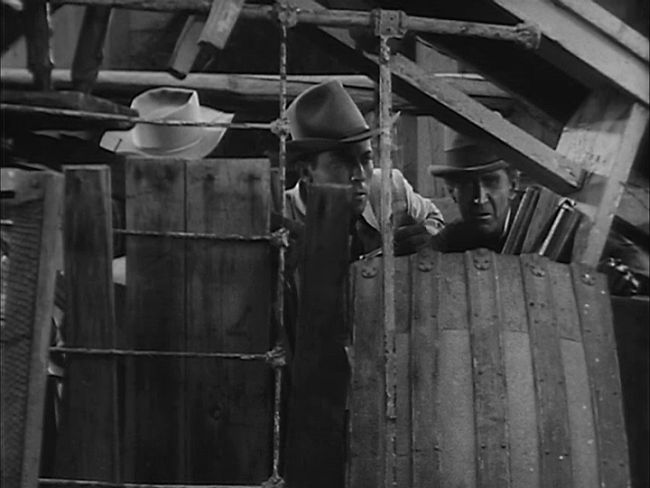 Steve: “Let everybody know that we’re about to get it both ways!” Mmm hmm. And why is Doc there with you? The guy can’t even not look at the camera, you think he can shoot? Also note the white hat to the left. That’s supposed to be Idaho Jones, but he has a black hat. Who is that guy?

Budd Buster as one of the unnamed henchmen is sent out to do something-or-other on the roof of the stable the Prussians are holed up in, but the minute the door is opened, he’s shot in a way that’s not supposed to be hilarious but is. It definitely, definitely is. Even better, they toss him aside without a second thought and send Braddock right out the same way, but this time he makes it to the roof, where he takes his place right next to Steve and, without looking at each other, the two start chatting it up. 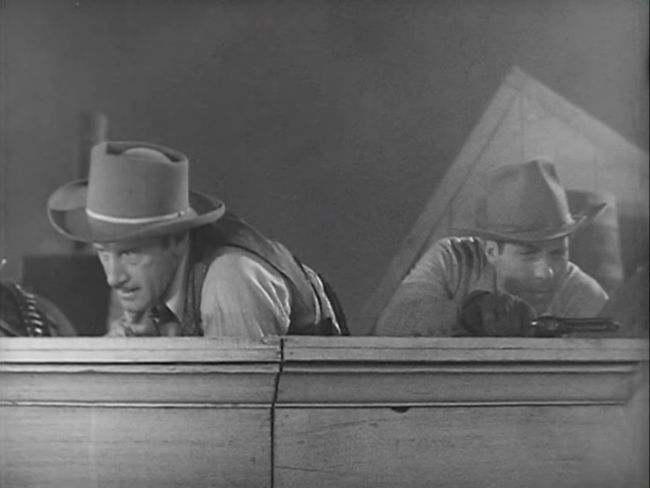 “So, have you seen any renegades with those Modocs?” 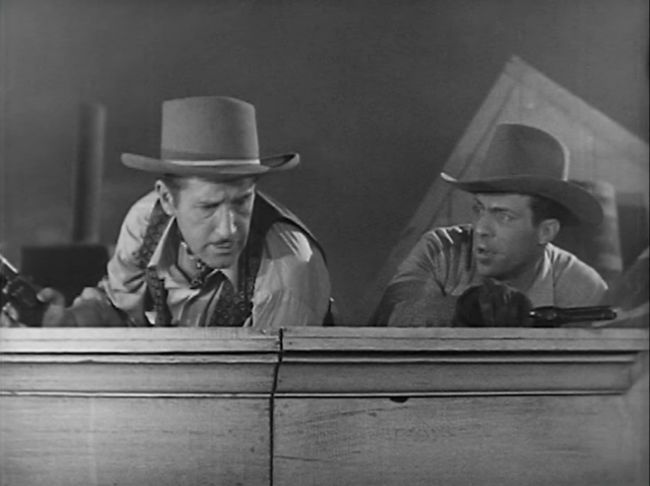 “No, and I’ve been looking for one, too… BRADDOCK!”

They proceed to get into a fistfight, which makes just all kinds of sense, since they are both armed and there are other men on the roof, also with guns. Speaking of guns, a Modoc down below shoots Braddock in the back. 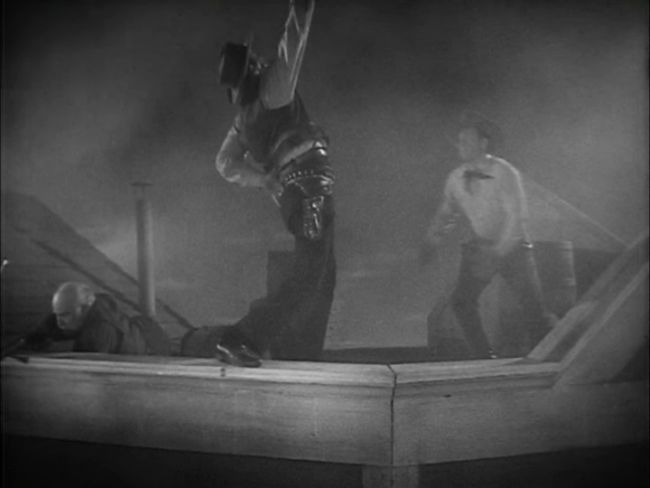 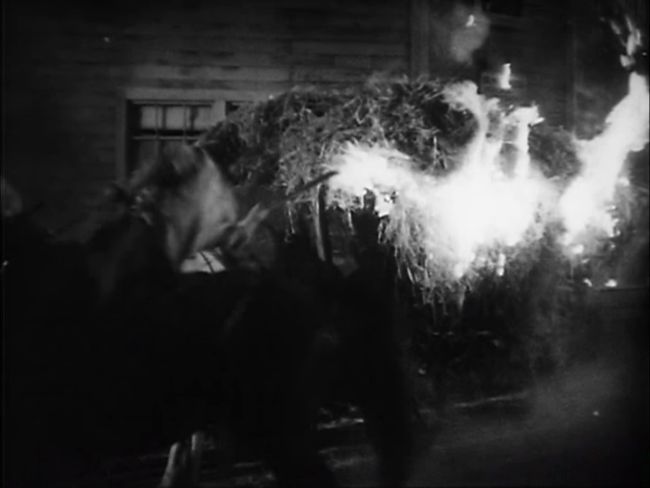 which was probably not a good idea when hundreds of people who have torches and want to kill you are milling about. But it gets better! 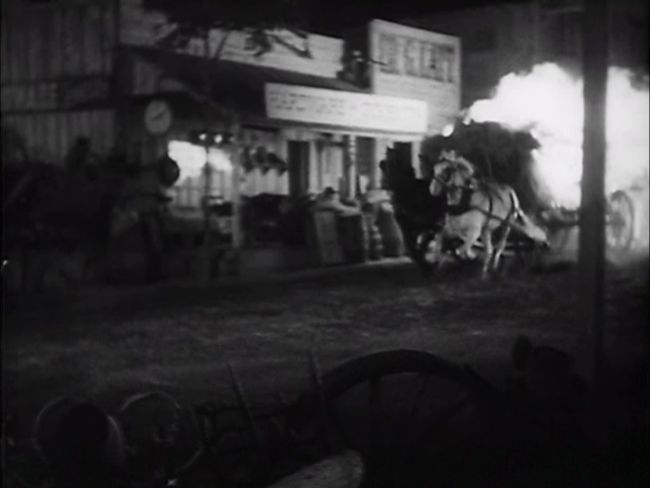 The flaming hay wagon goes tearing through the street, then crashes into a restaurant! Ha!

Find out next week if the final chapter of this godforsaken serial is only five minutes long and consists entirely of footage of Steve’s funeral, his ashes gathered into a tiny little pile and placed gently on the pillow of a deluxe, satin-lined coffin. And it’ll be a nice funeral, too, or at least until a bereft Idaho sneezes into the casket.

Or maybe that won’t happen. Tune in next week to find out. 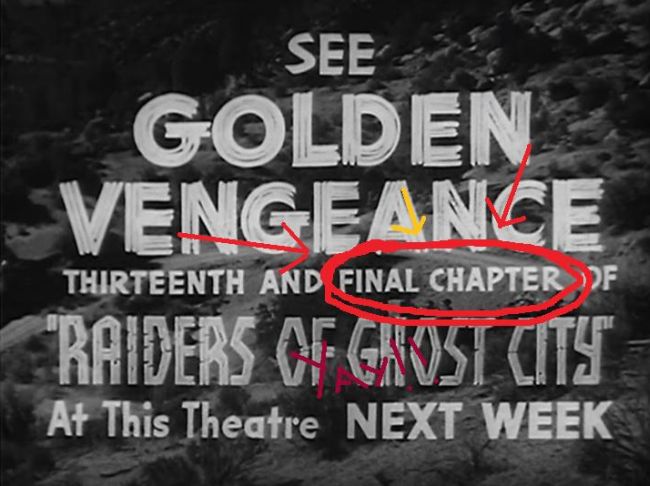