It’s our final recap of the 1945 non-classic Universal serial Raiders of Ghost City, and if my lack of enthusiasm and your lack of clicks are any indication, we were so done with this about five chapters ago. But it’s the glorious final chapter, which picks up just as the last chapter ends. Steve enlists the help of miners to the good guys’ cause, while Alex and Trina gather their henchmen together to get the stolen gold out of town, thanks to the distraction of the nearby Modoc tribe raiding Oro Grande in anger over being tricked — or so they think — when they are unable to speak to President Lincoln as promised.

Actually, confession time: I have no idea if the Modoc are raiding Oro Grande or the abandoned Ghost City. I believe this is supposed to be Ghost City, though the shots are all stolen from another film so the buildings don’t match up. We even see homes which are clearly occupied, while Ghost City is a completely empty gold rush town. Also, during this final chapter we see Alex, Buck and a henchman behind the Golden Eagle, which is in Oro Grande of course, so I believe this is supposed to be Oro Grande. On the other hand, the Ghost City mines are clearly very close by, but it doesn’t make much sense to try to prevent the Modoc from burning down an abandoned town. Why waste the resources? Basically, it’s clear the serial has just conflated Oro Grande with Ghost City, hoping no one will notice. So… we’ll call it Ghost City and stop thinking too hard about this. Sound good? Sure, sounds swell.

As the chapter ends, Steve grabs Braddock’s bleeding corpse and jumps off a building with it into a wagon full of hay which a Modoc warrior immediately lights on fire, causing the horses to panic and ultimately crash the flaming wreckage into a restaurant. In other words, once they port in some footage from another film, things is fin’ly gettin’ good. If any of that had been going on in the previous 11 chapters, perhaps we wouldn’t be in this near comatose state we find ourselves in now.

Steve is thrown from the flaming wagon, where his butt briefly catches fire. 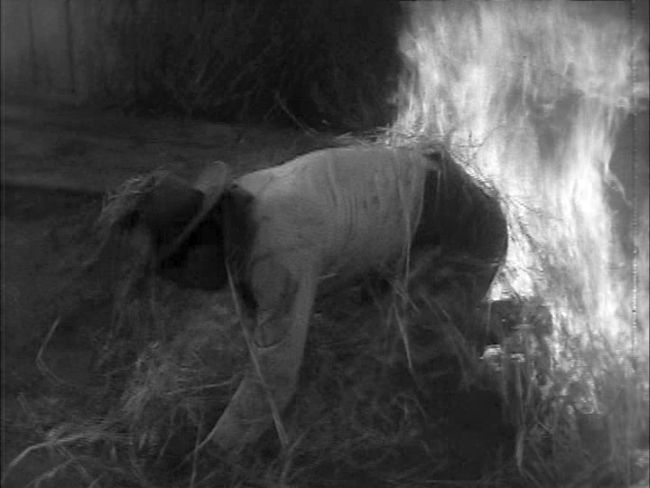 That is actually Dennis Moore, who looks none too pleased to be put in this kind of peril just because Universal was too damn cheap to hire a stuntman. But when did Dennis Moore ever look pleased?

Steve and Idaho plan to hunt for the gold raiders, and they leave Doc in charge of the miners who are still fighting off the Modoc. Sure, makes sense. Nothing says “leader” like an elderly, mescaline-addled mushmouth. 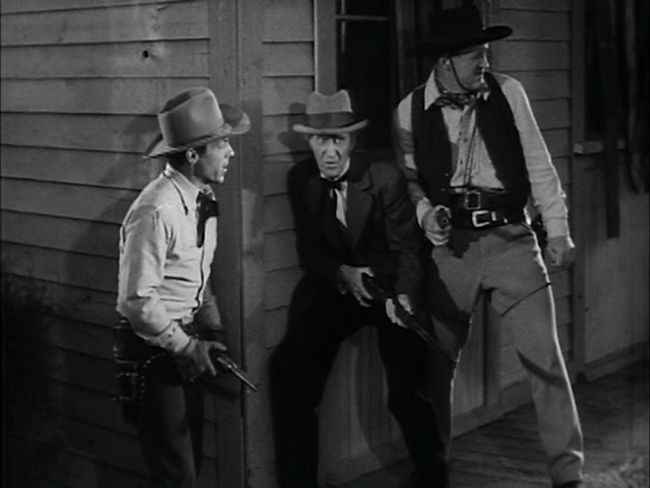 Who wouldn’t trust their lives in the hands of this man?

There’s a lot of pretty exciting stuff going on here courtesy the footage from another film. Buildings are burning while all the settlers, even women and children, fight off the rampaging Native Americans. Sure do wish I knew what movie that was from so I could watch it instead of Raiders. Meanwhile, Idaho and Steve sneak into the raiders’ lair and down into the mines, where a dying henchman gives up everything he knows about Morel before kicking it. 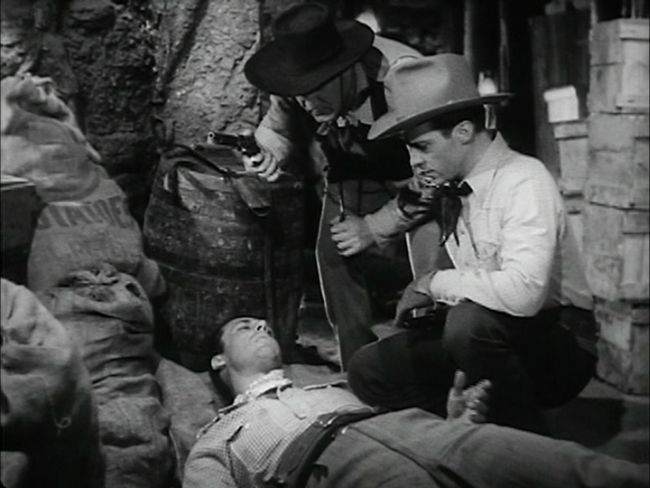 Above ground, the U.S. Cavalry arrives and saves the day. Cathy had apparently been with the Cavalry and arrives just as the smoke starts to clear. That’s not surprising. What is surprising is Idaho was underground with Steve talking with the dying raider… 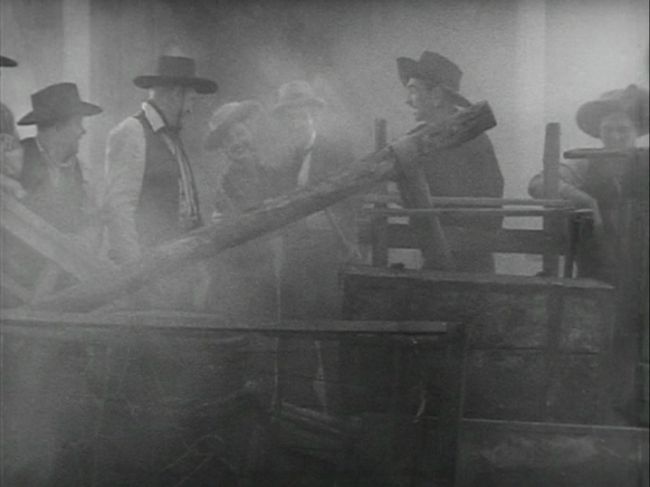 while at the same time above ground fighting to protect Ghost City. That’s him just to the left of Cathy. And now that I see Cathy’s cowboy hat, I’m starting to think the mystery white hat in last episode was her all along. Boy, the continuity guy really just phoned it in on this finale, didn’t he?

So Idaho, Cathy and Doc go into the mines where the raider has finally kicked it, and Steve decides to embark on one last corpse-robbin’ spree. You know, for old times. 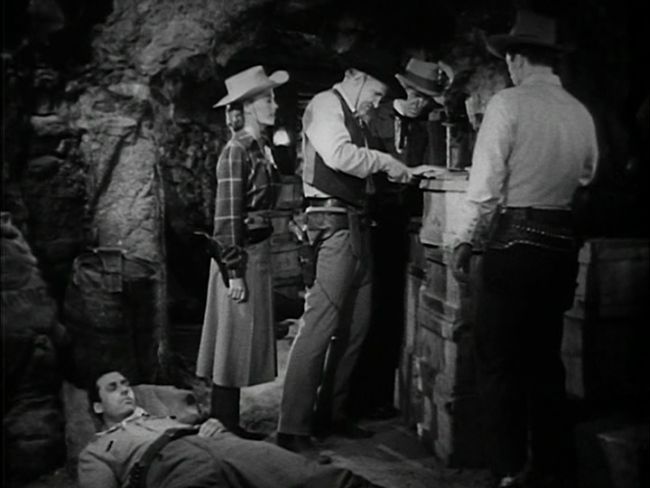 The raider had been guarding these boxes of gold, which turn out to be (DUN Dun dun) fool’s gold. I know, right? Totally clever. I mean, sure, it doesn’t make any sense, because where would they have gotten five tons of flax pyrite (in space? at this hour?) and had the time to box it up all nice and neat? And why would they bother when anyone in California during the gold rush years would know pyrite the moment they saw it? Hell, even Idaho, the dumbest sidekick west of the Rockies, knew it was pyrite immediately. But totally clever, sure. 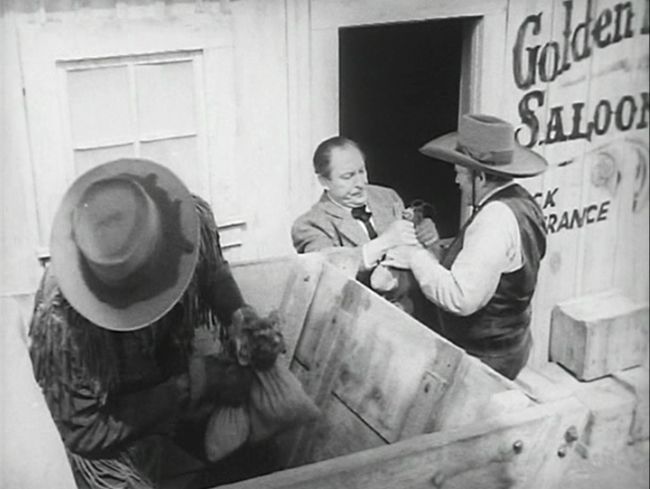 Back at Oro Grande (or wherever), Alex and Buck and one remaining henchman load one ton of gold onto a buckboard wagon themselves, because that makes as much sense as anything else in this serial. Also, it should be noted that a ton of gold is approximately $1 million in 1895 dollars, which is supposed to be enough for a down payment for Alaska, but since it was purchased for $7.2M, I don’t think so. 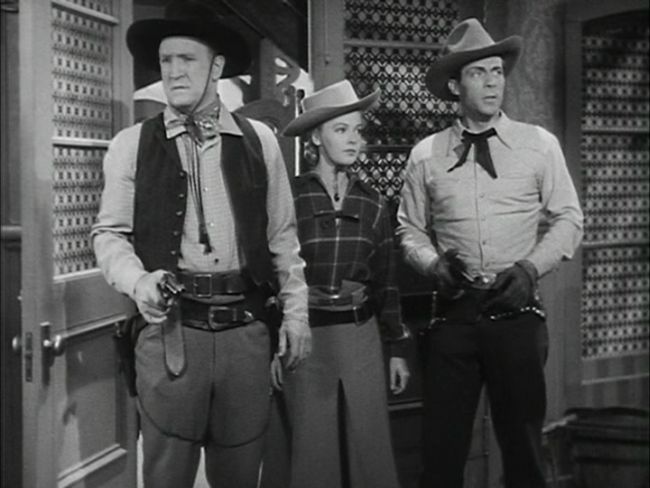 Steve, Cathy and Idaho arrive a moment too late — the baddies have already gone. Steve tells Cathy to go do some busywork, basically, and Cathy flashes the nastiest look I’ve seen her give through this whole serial.

As the guys rifle through the abandoned Golden Eagle, it turns out it’s not actually abandoned. 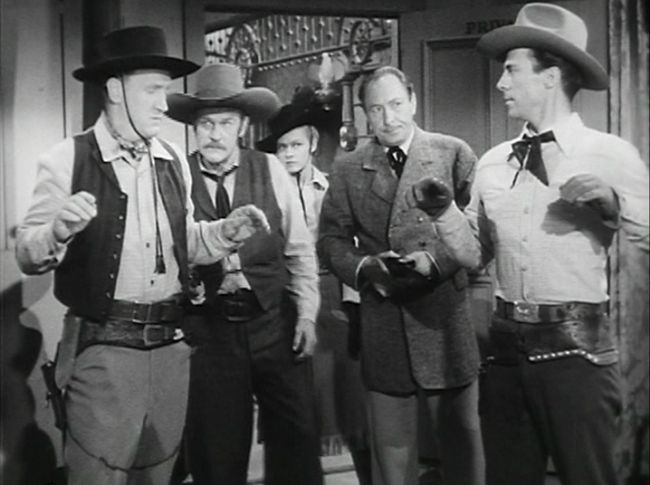 It looks like I caught Joe Sawyer blinking, but I swear he goes through this whole scene with his eyes closed. Nothing this character does makes sense. It’s infuriating.

So Buck, Alex and Trina shove the idiot good guys in the cellar next to a bomb, but not after Trina tells them their entire plan, because she’s auditioning for the role of Ernst Stavro Blofeld in the next Bond flick.

They all get downstairs, and the following happens: 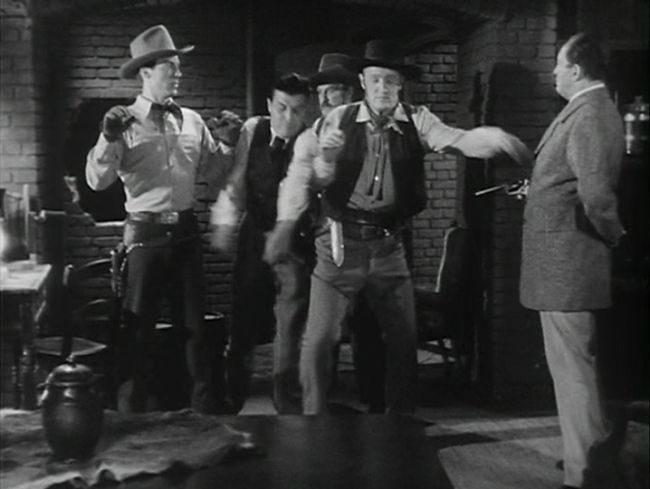 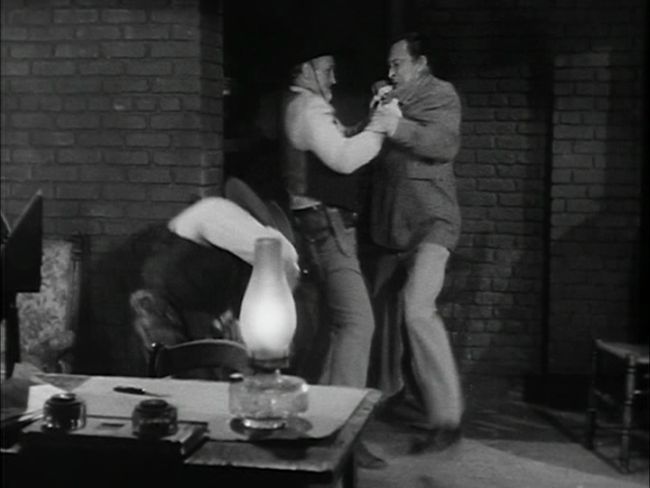 Then he punches Alex, who accidentally shoots and kills Buck, because the writers had to get rid of the last named henchman somehow. Idaho continues to rattle Alex around as Buck slowly falls to the ground, just like he was taught in the silents. 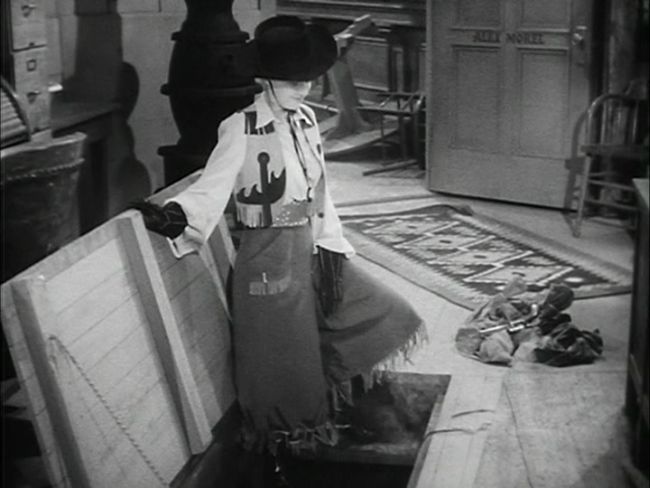 As the remaining living guys in the basement scuffle about, Trina lights the fuse and leaves everyone, including her pals Alex and the evil telegraphy guy, to die a quick, explodey death. The wagon driver peels outta there with the gold as Trina hides in the back, and because she is an icky gurl, Cathy comes riding after her, because it has to be girl vs. girl when it’s time for the showdown. Nearly a century of Hollywood has taught us that.

Back in the Basement of Almost Exploding, Steve uses the evil telegraphy guy’s hand to shoot Alex Morel! 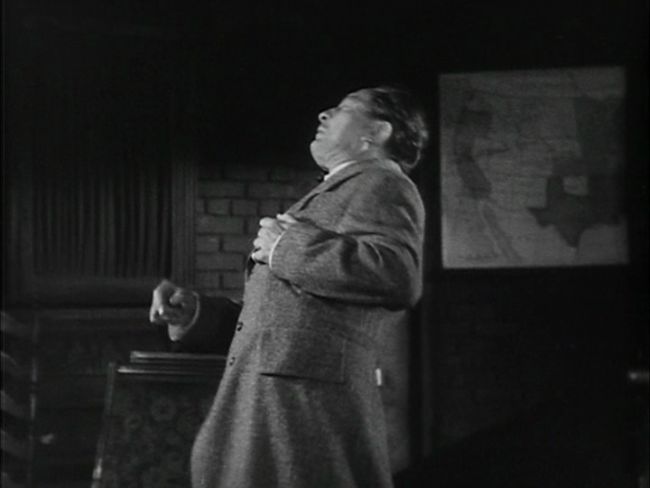 The two ostensible heroes of the show leave evil telegraphy guy unconscious in the basement, then run like hell before the bomb goes off, while Cathy chases after the gold wagon so hard the driver panics and goes off a shallow cliff, killing both of them instantly. 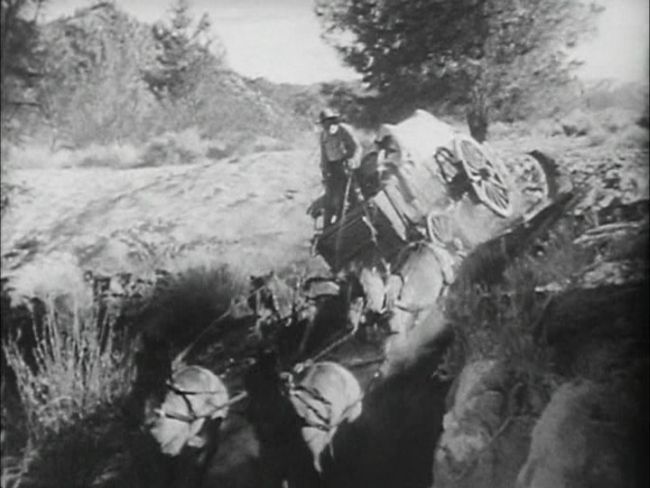 More excitement from another movie. Pretend like you don’t see a second man behind the wagon driver there. Suspend your disbelief. Go ahead. I dare you.

Folks, that’s it. That was the exciting conclusion of our 13-part story. Oh sure, there’s a congratulatory chinbeard moment, featuring President/Fesserman, who is now called Fessenden by both Doc and the auxiliary chinbeard. Anyway, the government cannot officially acknowledge their heroic deeds because of secrets and such, but the trio are heroes etc. etc. 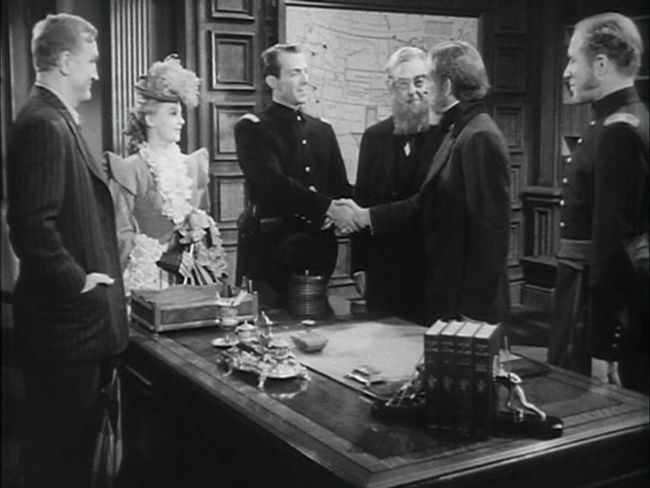 And what the hell kind of get-up is Cathy in, anyway? 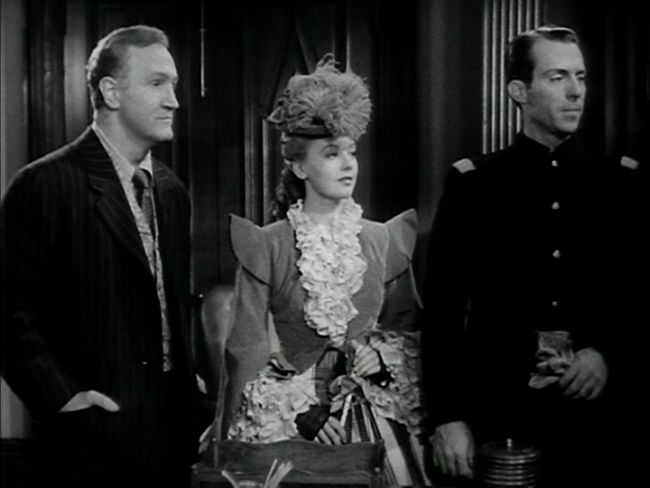 Is she a whorehouse madam? Was there a more interesting serial here that we were denied the opportunity to enjoy?

You might be interested to know that Cathy’s hat… used to be Trina’s. Looks like corpse robbing is alive and well and living in Oro Grande.

It’s the end of the serial and Dennis Morgan is pissed, Wanda McKay is mentally calculating the years she’d serve in jail for killing the wardrobe guy, and Joe Sawyer is having trouble keeping his eyes open again. So glad this serial ended at this exact moment. You know, to save it for posterity. 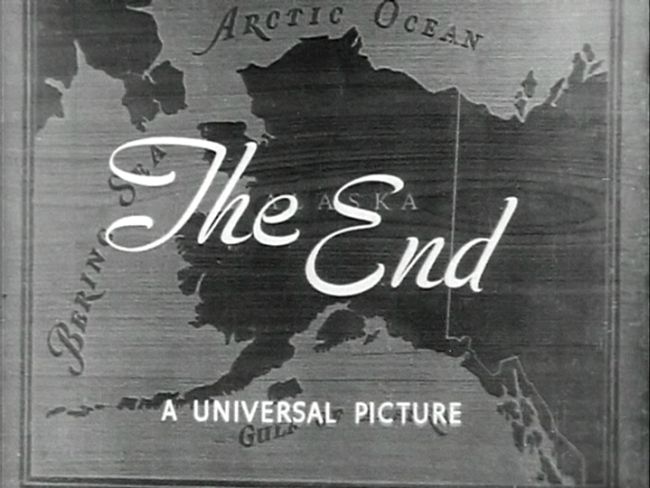 Alaska is saved from being purchased by the Prussians, allowing the U.S. to buy it for $7.2 million just under three years later, so… yay?

I mean, great ending for an educational computer game designed for Social Studies courses grades four through six, not so great for an exciting cinematic serial.

If it seems like I rushed through the last few chapters of this, that’s because I straight up did.  I’m not going to lie to you good people: I could not get through this fast enough. Though the first three or four episodes were promising, the whole thing ran out of steam quickly. It was neither crazy nor ridiculous enough to really get into, but not good, either.

Thank you all for putting up with Raiders of Ghost City! Big thanks (and possible revenge) to my BBFF Ivan, Scott C. for being consistently funnier than me in the comments, and Electric Dylan Lad at Iverson Movie Ranch for his great blog and even better info. Also a big shout out to James Vance for regularly commenting and keeping me from being lonely. So lonely.

Give me a couple weeks and I’ll start something new, though I haven’t decided what to do yet. No movie serials for a while — and when I do go back to a serial, there is going to be a damn robot in it, mark my words.  The world is mine, I can do what I want.