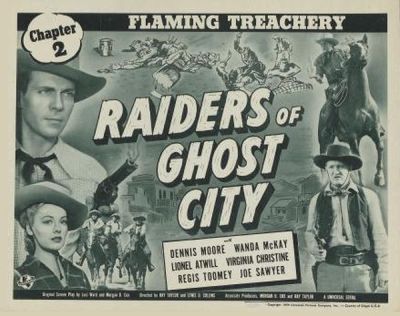 The moment I started this chapter I knew I would love it, because its title is “Flaming Treachery.” As in treachery, an intangible yet powerful thing, which somehow caught the fuck on fire. Delicious.

Raiders of Ghost City was produced by Universal in 1944, and is one of the last movie serials they ever did. Serials were falling out of favor, and the more popular television became, the less necessary (or wanted) weekly “shows” in the form of serials were. William Cline’s book In the Nick of Time lists Raiders as the last of the Desperado-type Western serials released by Universal, though Columbia, who had popularized them as far back as the 1930s, continued well into the 1950s. This was Dennis Moore’s first serial, however, and Cline notes that Moore was popular in serials and programmer Westerns precisely because of his bland demeanor; it was an asset, not a hindrance.

For those of you playing the Raiders of Ghost City home game, the serial can be found on YouTube in an iffy (but free) print here. The VCI set is actually quite nice, restored and with the 13 chapters on two DVDs, so if you’re interested in owning this serial I can highly recommend the quality. I cannot necessarily recommend the quality of the acting, writing or fake beards, though this is better than Phantom Creeps thus far, and yes, that is both damning and faint praise.

Last week on Raiders of Ghost City! Captain Steve “Bland” Clark (Dennis Moore) of the Union forces is sent by two government-appointed chinbeards to Oro Grande, California, where they fear Confederate Captain Clay Randolph (Regis! Toomey!) has holed up in nearby Ghost City. Reeg and his gang have been stealing Union gold and also murdering all the Union soldiers sent to investigate, which is why it makes perfect sense for the geniuses in D.C. to send the soldiers in one at a time over the course of months. It’s Capt. Clark’s turn to go get his fool ass killed, so after being informed that the bad guys carry European coins dating to 1752 for some reason, he sets off, traveling via railway. Unbeknownst to him, two fellow passengers, Trina Dessard (cleverly pronounced “De Sade,” played by Virginia Christine) and Alex Morel (Lionel Atwill) are the real culprits behind the gold thefts. 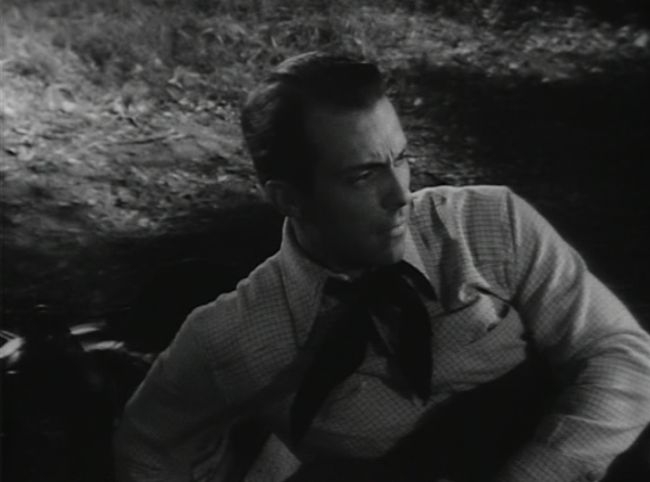 If Dennis Moore doesn’t start stealing from the rich and giving to the poor soon, heads are gonna roll.

Meanwhile, in Oro Grande, Cathy Haines (Wanda McKay) runs the local Wells Fargo office, where Union soldiers are stationed. But there’s a mole who feeds telegrams and codes to Reeg’s bad guys, allowing them to intercept and rob the most recent Union gold shipment. Cathy’s maybe-friend maybe-more Jeff turns out to be part of the gang, injured during the robbery and caught by the Union Army.

Back at the train: After being lured onto the last car of the train by henchmen clearly smarter than he is, Capt. Bland wards off a fistfight just as Alex Morel sneaks over and unhooks the car from the train. 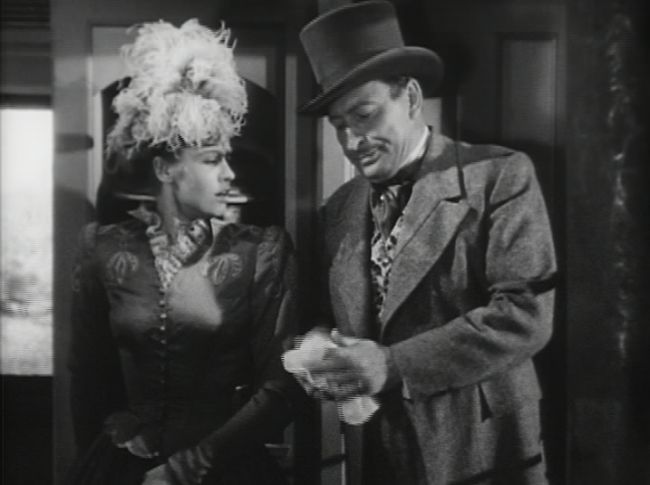 There is a brief but cute bit in the recap, which actually contains a little new footage, where Alex tells Trina what he’s just done. She stares at him cleaning his hands after doing such a dirty deed and gasps. Apparently, no one told Trina that he was a bad guy until just this moment! 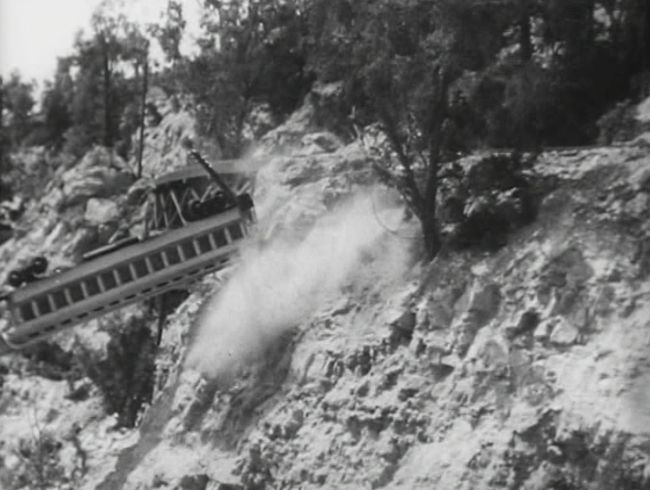 As they continue on, the Captain and the henchmen plunge backwards down the track, then derail off a bridge into the sagebrush! How will they ever survive?! 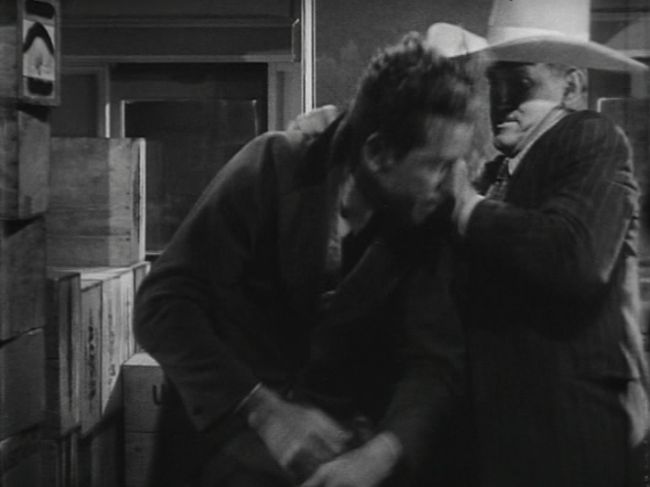 By being saved by a guy in a novelty cowboy hat! 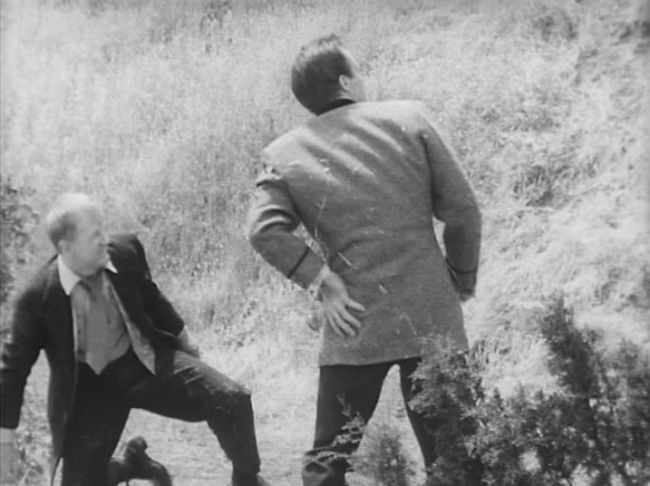 Idaho Jones picks up bad guys, punches them, knocks them down, then picks them up again. When he realizes the car is no longer attached to the train, he grabs Steve and they both jump from the car, Idaho coming out of the tumble fine but Steve apparently injuring his left buttock.

The train backs up and picks them both up. No one sticks around to investigate, no recovery crews are called in, no one goes to look for the others on the train car, nothing. In fact, no one on the train itself seems to care that this horrendous accident has just occurred. Folks, put your seat backs in the upright and locked position, because I think we have our first accidental running gag: Shrugging at death. 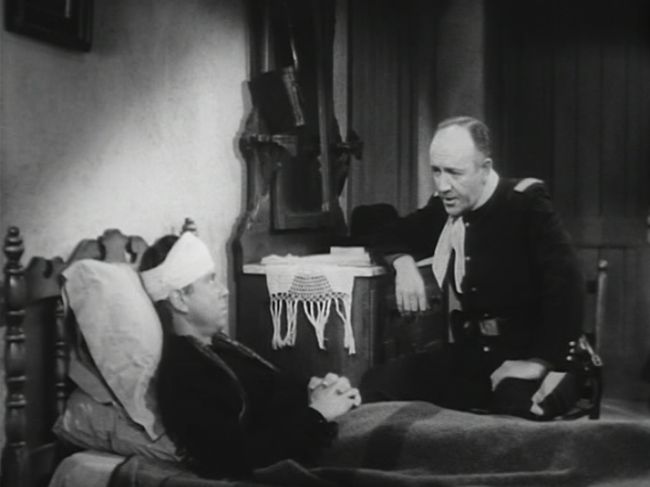 Jeff is being interrogated by a Union officer, who starts out questioning by saying, and I quote, “No matter what you say, you will be hanged.” You sure do know how to interrogate, Mr. Union Officer Guy.

But this is a goofy Universal serial, so Jeff talks, but he has good reason to: He claims to be a secret agent who has infiltrated Reeg’s raiders, and he’s also Steve’s long-lost brother, thought dead for months, and he wants to be kept un-hanged until Steve finally arrives so he can vouch for him. Now, I very much wanted the officer to say, “Okay, thanks for the info, now let’s get you hung, boy,” but alas, this does not happen.

Speaking of secret identities, Idaho is secretly a Wells Fargo detective, which is kind of awesome. But sadly, Idaho is no proto-Continental Op, though I have a feeling he is the competent sidekick that everyone will come to love more than the ostensible lead of the film; that is, to compare this serial to Phantom, he’s in the Regis Toomey role in Raiders, while Regis Toomey is in… the Monk role. Oh god.

Idaho was sent by Wells Fargo because their agents have also been disappearing in the Oro Grande region, which makes one wonder just how many in a town of about 72 people can go missing or be murdered before someone figures out something fishy is going on. 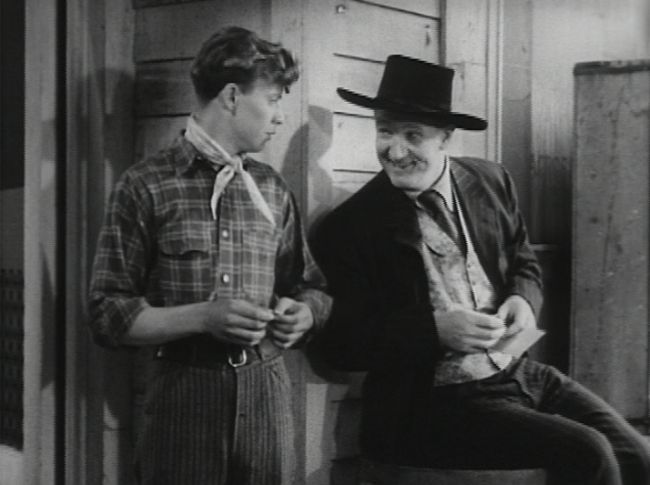 While in a brief stop in Omaha, our man Idaho sits outside the Wells Fargo office and intercepts a telegram for Steve that some hipster kid was trying to deliver. The telegram identifies Steve as Steve — guess he was going by a secret identity while on the train, but it’s not like anyone on the train didn’t know exactly who he was. It also says Steve should get to Oro Grande immediately to confirm if Jeff is his brother or not. Now, Idaho, being as brilliant as everyone else in this serial, doesn’t tell Steve who he is even though they are on the same side. Instead, he waits until Cap’n Bland jumps him in the brush at night when they’ve stopped to rest. 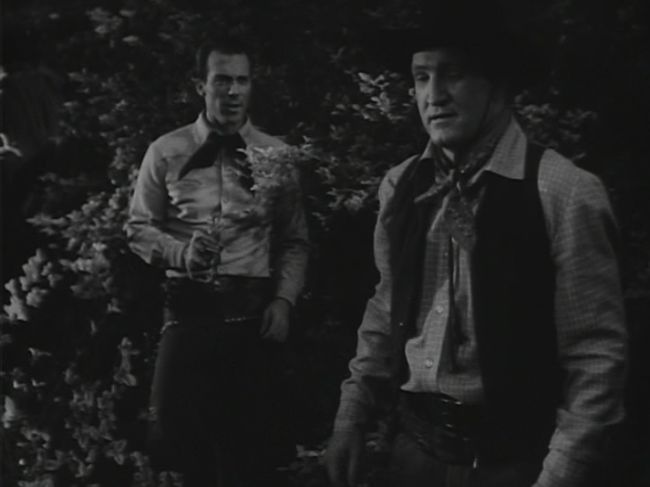 It’s a man’s life taking your gun out at night and showing it to people. 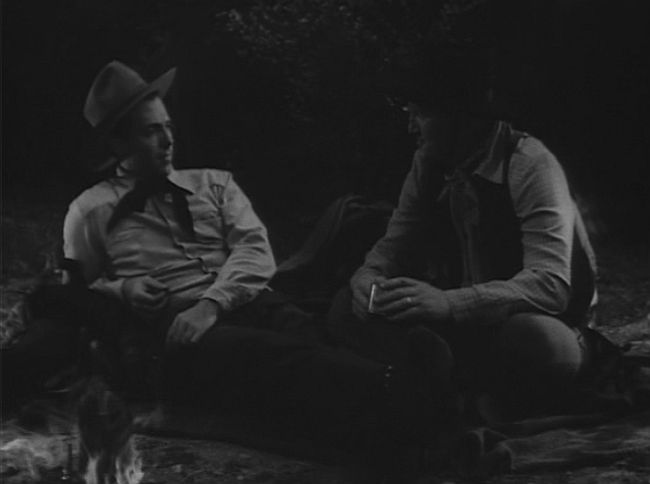 They sit by the fire and discuss the situation, learn they are allies, and decide to team up. Steve smiles: “You got a mortgage on my gratitude, Idaho!”

Can you imagine how upset the Ghost City raiders would be if they knew Jeff was a secret agent the whole time? Pretty darn upset, and I can say that with certainty because when an intercepted telegram informed them of Jeff’s true identity, they decided to go kill the hell outta that guy. 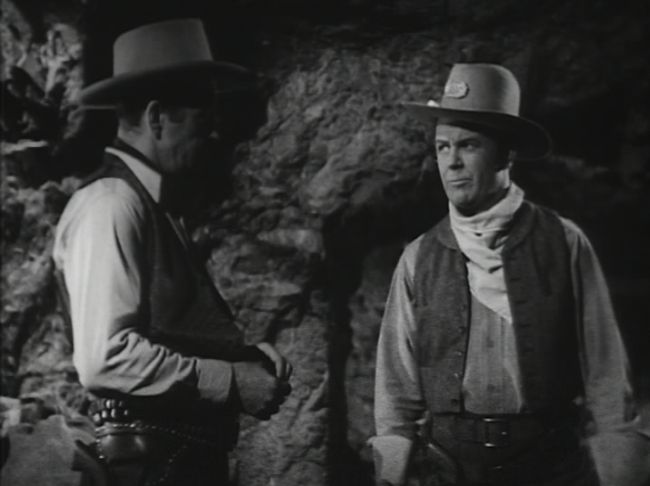 Reeg hiding out in a cave underneath that Ghost City stable the raiders are so fond of. This brief scene is pretty much all we see of the Toomster this week.

Steve arrives at Oro Grande with Idaho, and they’re told that Reeg’s crew are trying to get to Jeff. Capt. Bland very sensibly asks the Union captain how to get to his brother, and the captain tells him to just ride “due West; you’ll hear the shots.”

See, we’re 16 minutes into a dull, dull chapter where very little has happened and few of the ostensible leads have even been seen, and suddenly we find out that Jeff has been taken out of town to an undisclosed location and is being attacked at that moment by the bad guys… and this all took place off camera. Screw you, serial, seriously.

Steve and Idaho arrive at a cabin where Jeff is holed up along with a couple of Union soldiers, and they manage to make it in without incident despite about a dozen raiders shooting at the cabin. Jeff and Bland shake hands and are all, “‘Sup?” because they haven’t seen each other for years, what with Jeff having faked his death and stuff. 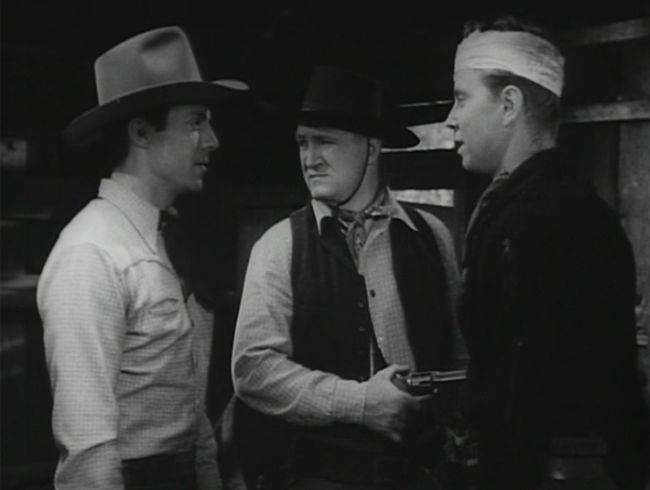 You can tell Steve and Jeff are related, just look at how their arms hang. Meanwhile, Idaho is stealing the scene like the whale in The Life Aquatic.

Soon the fellows come up with a plan to get out of the cabin without being killed by Regis’ gang, when immediately someone from Regis’ gang sneaks up to the cabin and shoots Jeff because no one bothered to watch the windows. 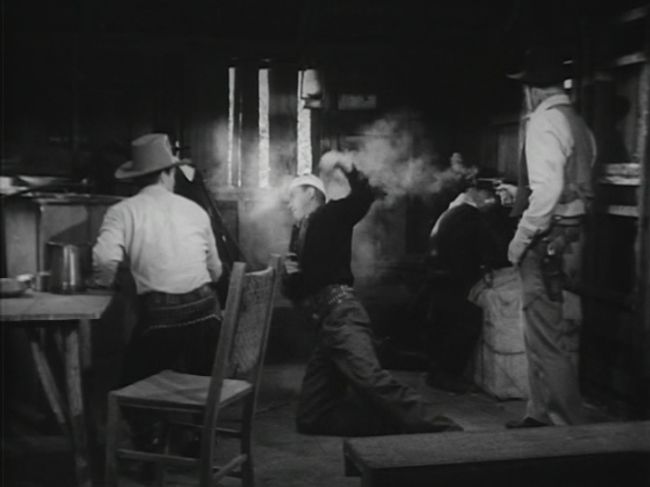 And this is exactly the kind of thing that happens when you entrust key elements of a complex plan to a young kid with a head wound. Hope you learned your lesson, guys. 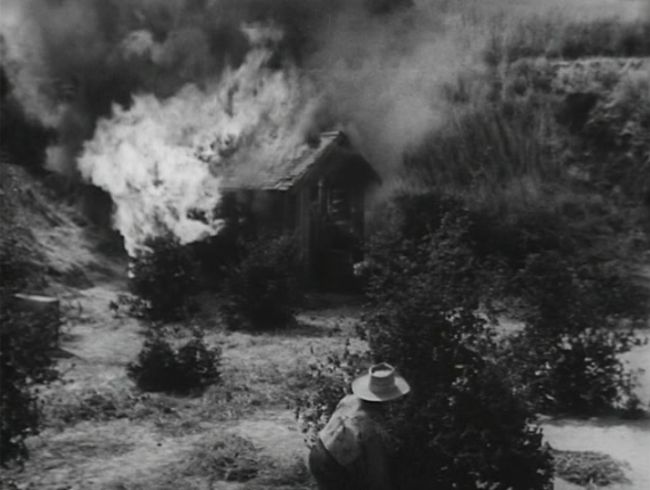 Cliffhanger! The raiders roll some TNT down a hill, shoot it and set the cabin on fire, then start to shoot the shit outta everyone, while Steve and his wounded-again brother head for the basement. Next week, let’s see if the tactic works as well as it did for James Caan 40 years later!