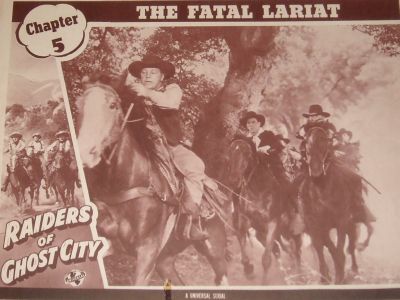 Last week on Raiders of Ghost City! Steve’s brother Jeff-Jim, wounded after the raiders shot him so he couldn’t spill the beans on their nefarious plans, dies on the way to Sacramento for medical care, thanks to Idaho Jones and his big, beefy manbutt landing right on top of him. Meanwhile, Confederate Capt. Clay Randolph finds himself in a predicament: Alex and Trina don’t like him but need him to give their gold theft ring the appearance of being a Confederate plot. He’s not to keen on them, either, suspecting that the stolen gold isn’t going to help the Confederates at all. Complications arise when Steve sees Clay go into the Golden Eagle saloon and recognizes him from their old West Point days. Clay leads Steve to Ghost City and into a trap, where Steve finds himself in a dark room with men poking their guns through holes in the walls, ready to go off at any second.

Steve gets out of the suggestive situation by dropping to the floor and shooting once through each door with a good two seconds in between shots, as though every raider wouldn’t have just started shooting the shit out of Steve once he got in their sites… and probably shooting each other when bullets passed through opposite walls, now that I think about it. 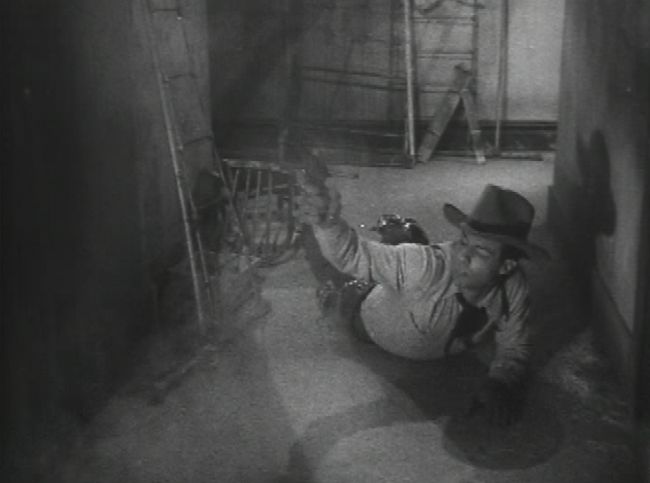 Steve closes his eyes when he shoots his gun. 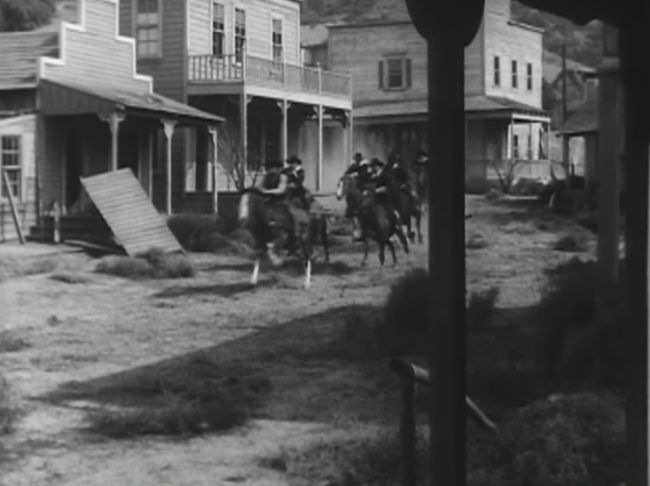 The U.S. Cavalry shows up too late. Again.

Previously, I mentioned that Raiders always gives us a little update on how the Civil War is going at the beginning of each chapter. What I didn’t mention is that they often add new footage to a previous scene used to remind the audience of last week’s episode. It’s just a few seconds of new material, but it’s enough to keep the recaps from being boring. Don’t get me wrong, this is still a Universal serial and as such is going to suck on some significant and hilarious levels, but I want to give a little credit when ’tis due.

The raiders, having failed to kill Steve despite being handed that cowboy’s ass on a silver platter, have a new plan: Make sure no one realizes that the abandoned stable in Ghost City is their hideout. 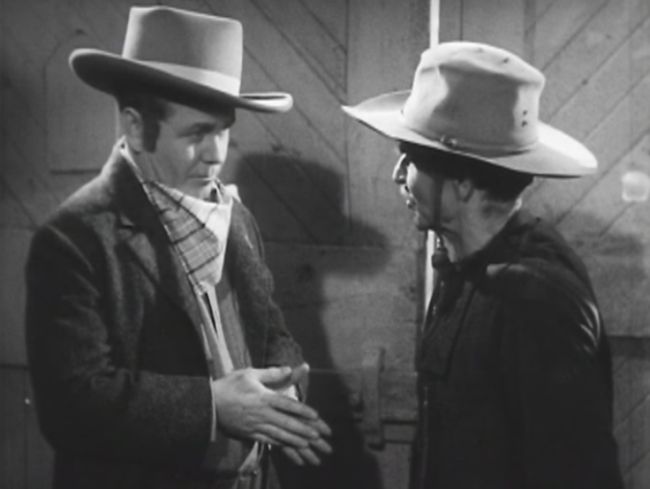 Reeg discusses this with his minions while trying not to laugh. Perhaps his glue-on sideburns are tickling him. Truth be told, the Toomster is really bringing it in this chapter. He has lines and things to do and is totally classin’ up the joint.

Still, this new plan of his makes little sense, as Steve, having just been ambushed in Ghost City, surely suspects that the villains have a hideout nearby. The raiders have everything cleared out and hidden when Steve returns with Idaho; there is no trace left behind, and this works, because hurrr and also durrr. 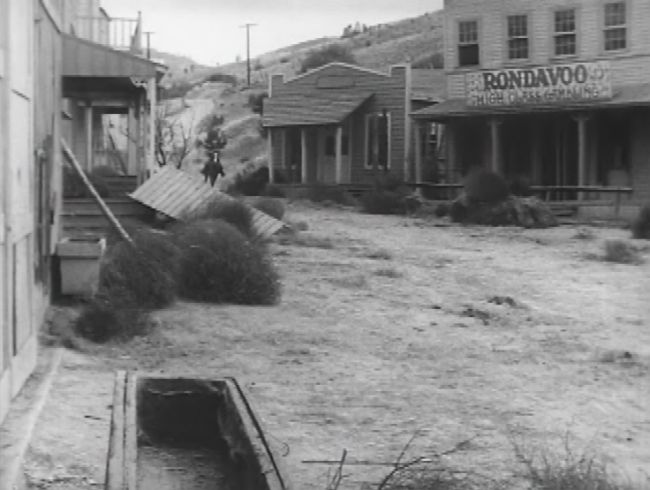 Cathy arrives in Ghost City just as the two dinks decide nothing is going down there after specifically being involved in shit going down there. She has important news: The Civil War is over! 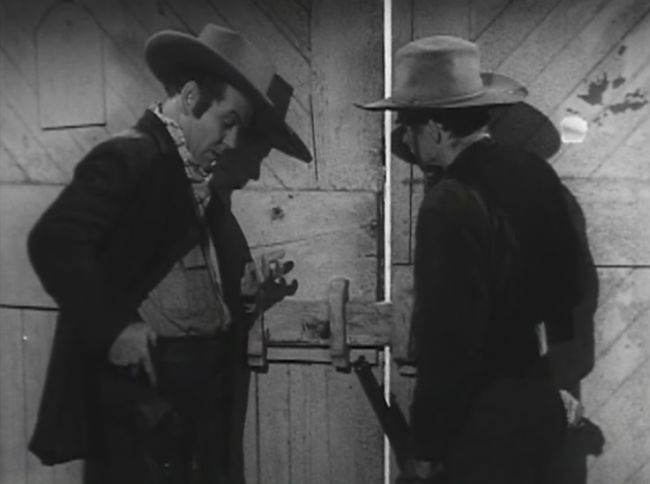 Reeg is pretty upset about this whole losing the Civil War thing. I’m starting to get a bad feeling about this.

The Toomster’s plan is to surrender like all other Confederate officers and let henchman Braddock take over. He leaves to surrender to the local authorities, while another henchman from the South decides he wants to do the same. Braddock lets Clay go, but moments later has the other henchman who was about to leave shot dead. That is some straight up James Bond shit right there. I’ve got a bad feeling about this. 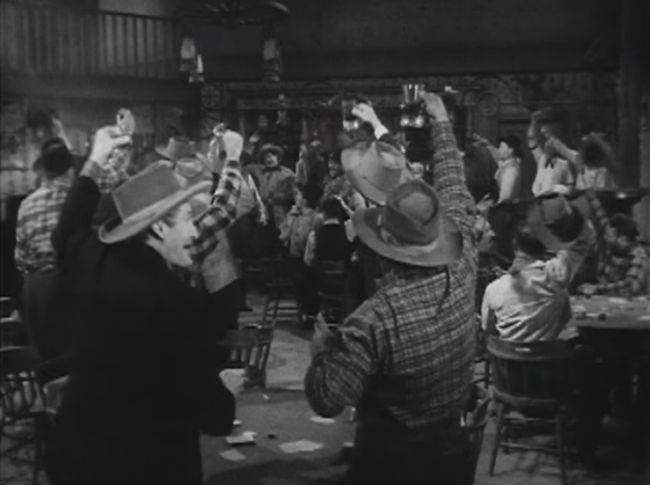 A saloon full of Tex Ma’ams give three cheers for ol’ Abe. 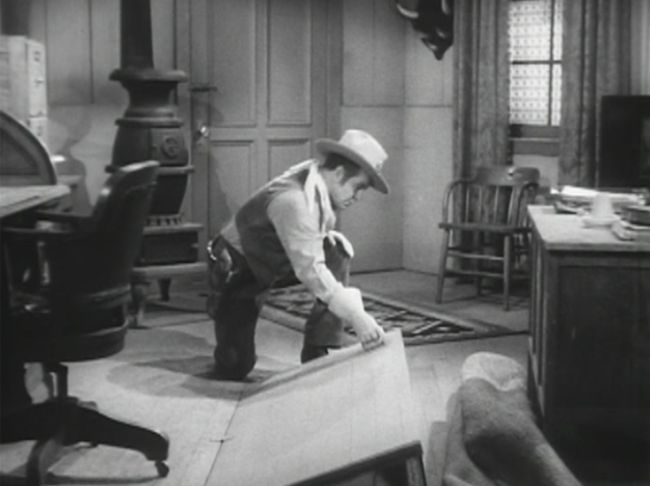 Meanwhile, Reeg stumbles across the trapdoor down to the secret code-breaking lair of sexy supervillains Trina and Alex. I’m really getting a bad feeling about this.

As he confronts the codebreaker and Alex, they all suddenly start speaking German. Secret identities! Reeg is very sympathetic by this point, exclaiming that we’re all one United States now and by God we’re not going to let a bunch of Prussians screw us over! He plans to take the codebreaker and Alex in, when Trina arrives, forcing him to surrender while the other Prussians get their smug on. 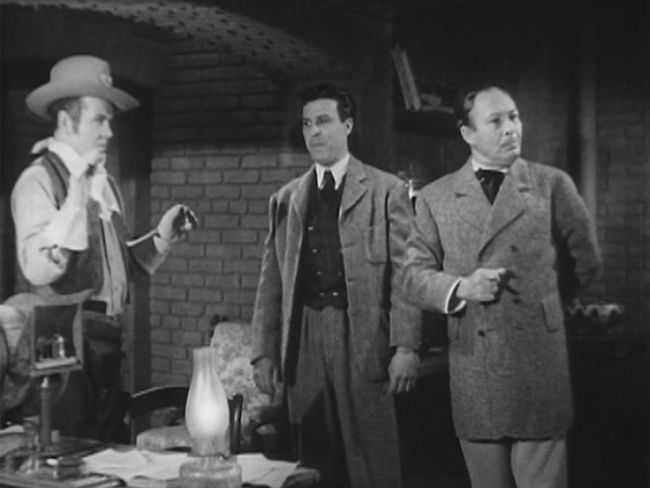 Trina reveals she is Countess Elsa von Merck, an evil Prussian countess what helps Prussians take what they want, when they want it. Reeg escapes by knocking over a lantern and climbing out the underground lair in the dark, locking these evil Prussians in. When they manage to get out of the basement, Trina very helpfully informs the people she was locked in the basement with, “He escaped after he knocked over the lantern and locked us in!” Who are you telling that to, Trina? You were all there.

Now that the serial has successfully plastered WWII propaganda on top of a solid foundation of U.S. Civil War stereotypes — something I definitely to not have a good feeling about — Clay decides to do the right thing and tell Steve all the secrets about the gold thefts and the Prussians, who he now knows are the real evildoers. 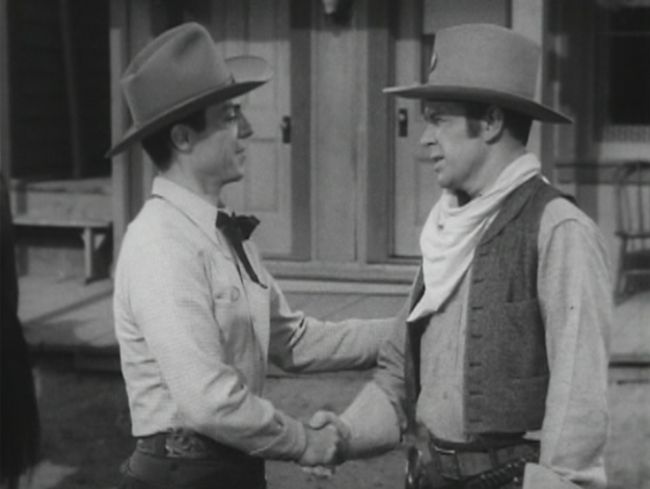 Nooooo! Regis, don’t do it! Don’t do the right thing and make friends with the hero, just run, bitch, they’re after you! Braddock’s riding up behind you! 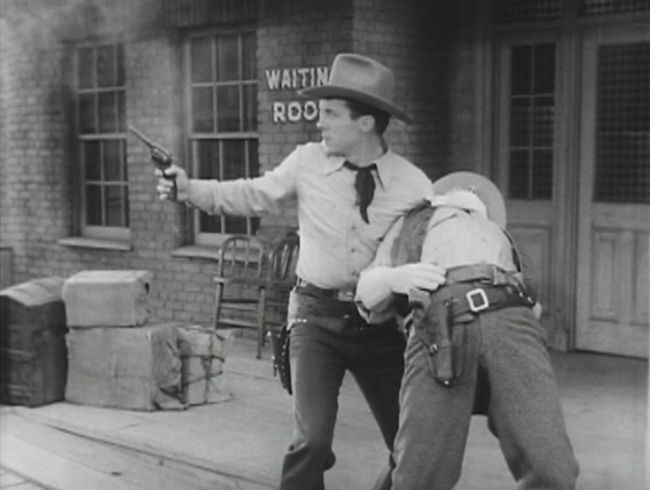 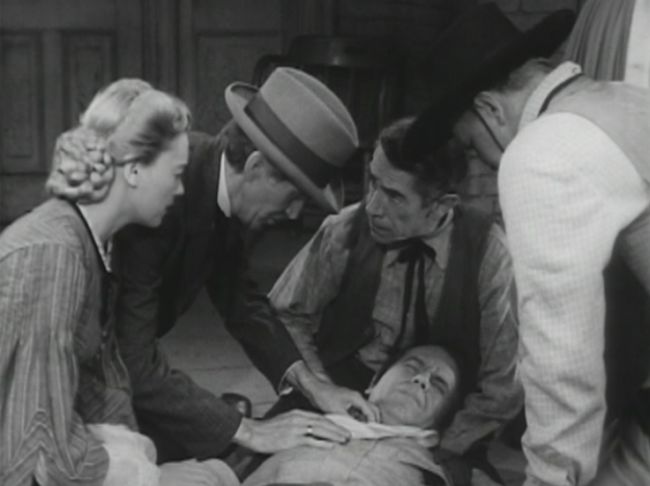 The entire cast gathers around a wounded Reeg! Noooooooo! 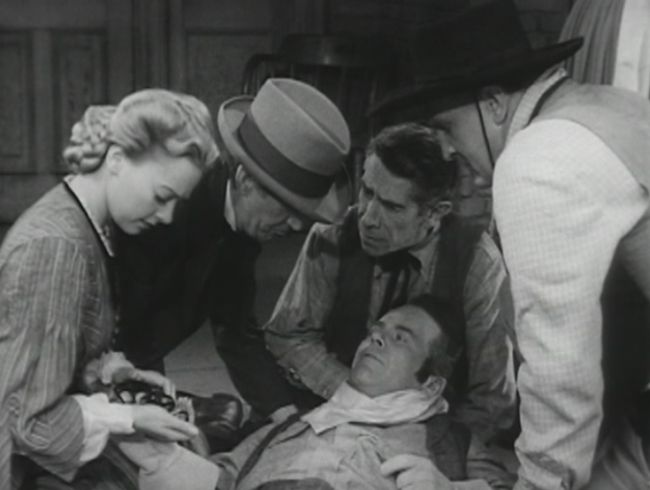 He hands Cathy an old coin just like the others found on people killed by the raiders, then… 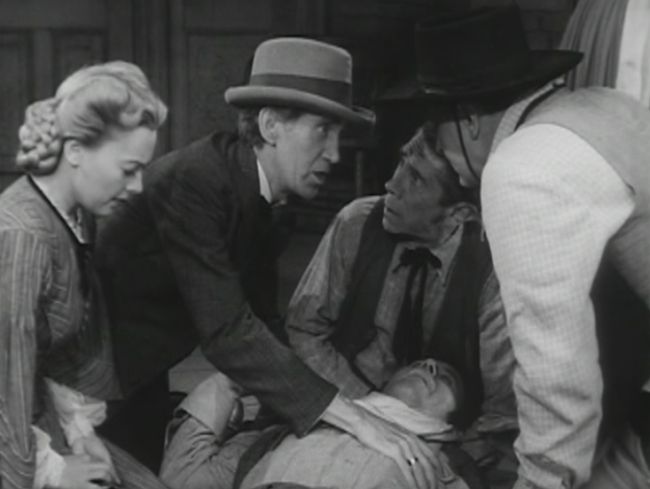 So… he’s going to be back, right? Maybe as a ghost? Because it’s Ghost City, right, so it needs a ghost, and Regis will be, you know? The ghost? Right?

While we’re waiting for the ghost of Regis Toomey to return to us and make us whole again, we spend a brief moment watching the raiders chase after Steve, who went riding off to get the guy who shot Capt. Clay. The raiders, better pranksters than they are marksmen, hang a rope from a tree and lasso Steve right offa his horse, causing him to dangle in a very silly way, flailing about and trying to get that rope out of his armpits. 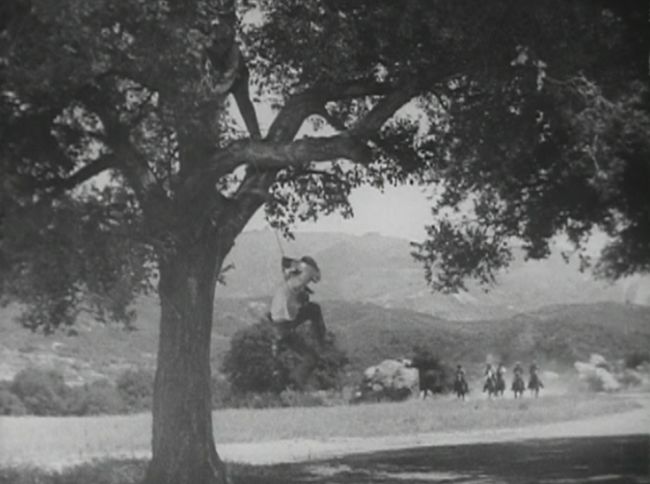 So, uh. Stay tuned for next week, when things happen to people nobody cares about any more. But, you know, maybe Regis had a twin brother who fought for the North. Things could improve.