A sincere apology to my faithful Raiders of Ghost City followers for putting this series on the back burner for three whole weeks. I had several concurrent deadlines at Spectrum Culture and another place which I hope I can finally reveal soon, plus an unexpected article for Press Play, thus the blog had to wait.

Last week on Raiders of Ghost City! The real masterminds behind the gold robberies, Alex and Trina, arrive in Oro Grande and take up their roles as saloon owner and chanteuse, respectively. Meanwhile, Confederate Capt. Clay Randolph starts to clash with some of his henchmen as well as Alex and Trina. Steve’s little brother Jeff-Jim has been wounded in a shootout with the gold robbers who are looking to finish the job to keep Jeff-Jim from talking, so Steve distracts the bad guys while Idaho Jones puts his wounded brother into a wagon and speeds to a nearby town for medical care. In a confrontation with the robbers, the wagon falls off a cliff! Suspense!

Raiders does a lot wrong, but the serial has a nice conceit of postponing the reveal of last week’s cliffhanger by a few minutes, which I think helps the whole thing flow better than serials that try to pick up where everything left off. When Raiders opens each chapter, we see a brief scene or two of war footage from another film with a blurb telling us where on the Civil War timeline this episode takes place. 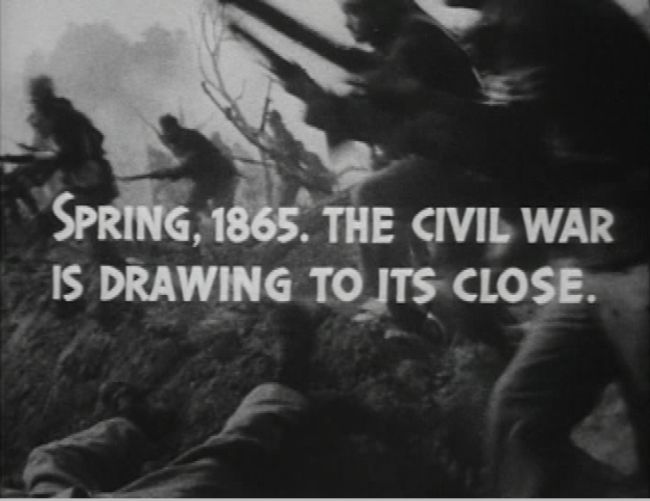 In the serial itself, there is no real mention of the Civil War, just a few vague comments, but fortunately these openings, cheap as they are, tie the premise together.

Good news: It’s the return of the chinbeards! 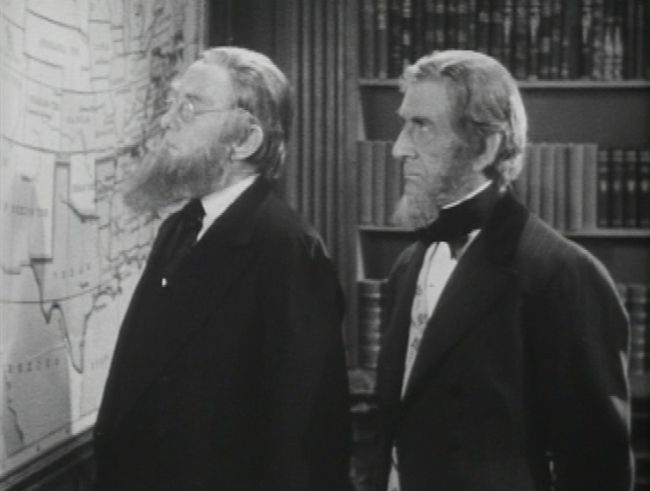 Steve hasn’t checked in with the chinbeards and they are concerned, as is common with chinbeards, who are notorious worrywarts. They contemplate sending in more troops to stop the gold robberies in Oro Grande, though they realize that would only mask the problem. What they really need is someone to infiltrate the gang of thieves run by this secret Confederate organization, which is why they sent Steve in the first place. In fact, they pronounce Steve the only person alive who can accomplish this goal, which leads us to ask why they sent so many people — including Steve’s own brother — before sending Steve himself.

Meanwhile, back at Steve, the bad guys chase him off a cliff. 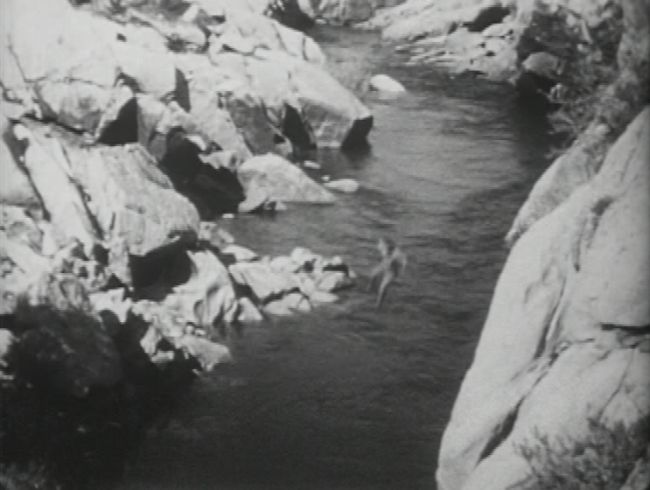 Because the bad guys are stupid, they think he’s dead, but what they don’t realize is that the guy who fell off the cliff was a stuntman! See, if they’d been watching closely, they would have seen the guy that took a header was in a different colored shirt. Also, just off camera, if you listen closely you can barely make out the wardrobe continuity guy saying, “Meh.” 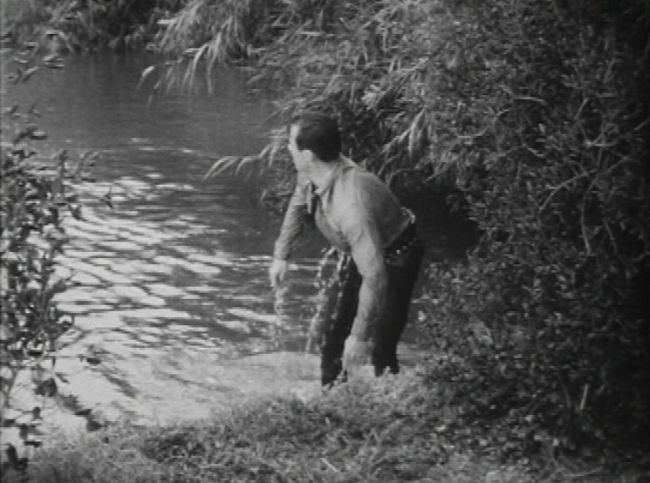 The Dennis from the Black Lagoon.

Back at the saga of the wounded Jeff-Jim, Cathy and Doc head to the big city where Idaho Jones is taking Steve’s wounded brother. 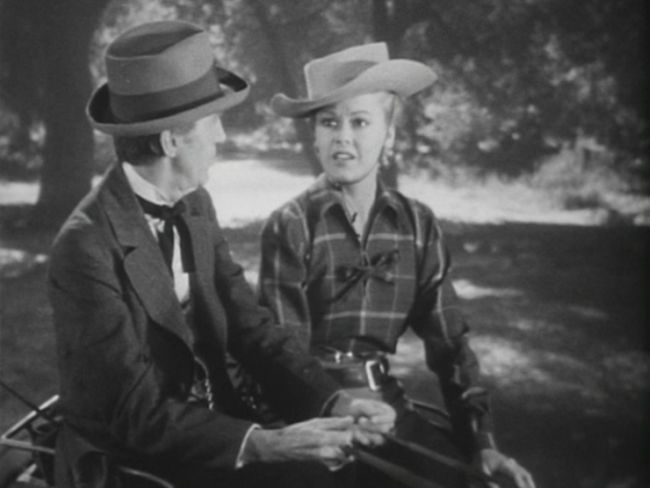 Sadly, Wanda McKay’s acting has already gone from decent to completely unacceptable. I generally avoid posting unflattering screen grabs just to laugh at someone’s briefly goofy expression, but in this case, I have a reason for breaking my rule: McKay spends the first several seconds of this scene talking to the doctor next to her while looking off about 30 degrees over his shoulder, reciting her lines by rote with a bare minimum of inflection. After a moment she gets this expression, a brief second of wide-eyed realization that she had been sleep acting and needed to engage with the film on at least some level. She overcompensates for a bit, then thankfully, the scene ends. The scene begins here and only runs for a few seconds if you’re curious. It’s astonishingly bad, the kind of thing that one assumes is the result of a quickie production using only single takes, though I wonder if that’s being charitable in this case. 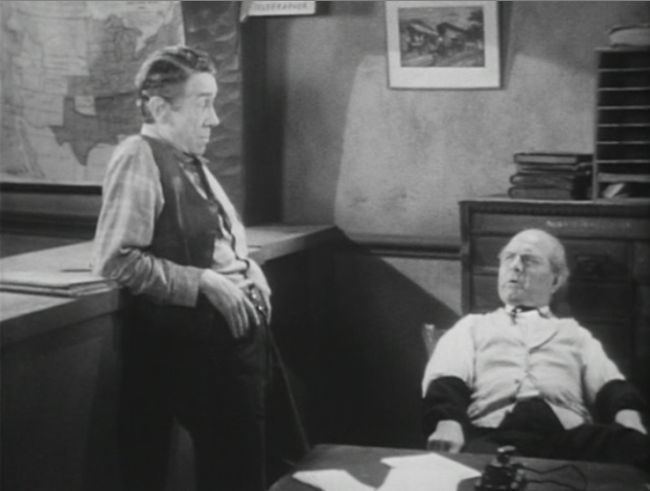 These two gossipy geese have something to do with everything that is going on, but hell if I know what. They work at the Wells Fargo that Cathy now runs, though she is never there anymore, and I suspect there is a retcon coming up shortly. Anyway, these two overhear a lot of what’s going on, and I think, but cannot confirm, that they are reporting what the Union Army is doing back to the gold robbers.

And now, the resolution to last episode’s very literal cliffhanger! Idaho, seeing the wagon driver has been killed and the horses are running out of control toward a cliff, realizes he and Jeff-Jim have to jump. So Idaho sticks his butt right into the wagon window, mooning us all. 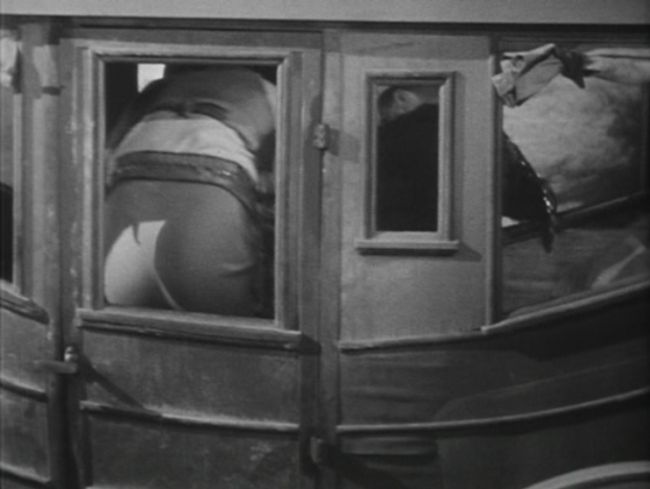 It’s too bad there wasn’t any glass in that window, he could have given us the “pressed ham.”

Idaho and the wounded Jeff-Jim leap to safety… 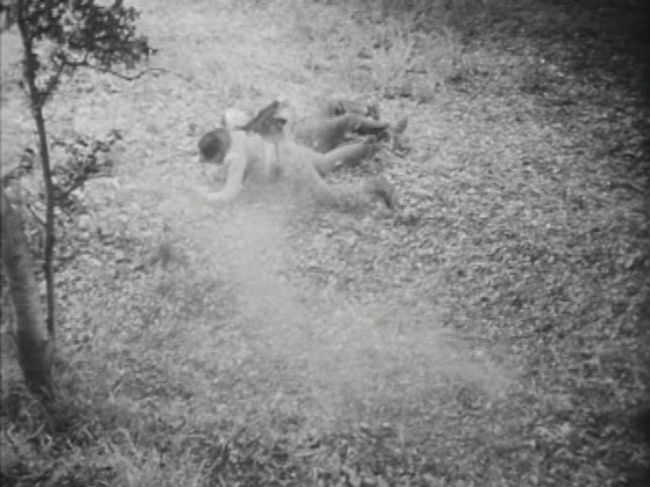 but Jeff-Jim doesn’t make it. 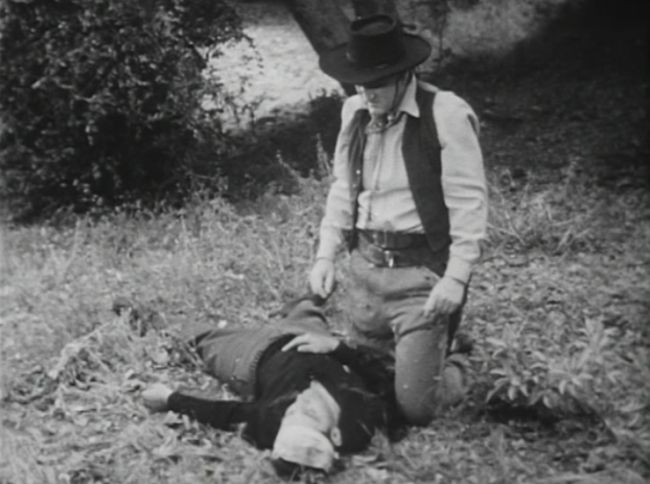 Perhaps that’s because Idaho’s big hambutt landed right on top of him when they jumped out of the coach, but I am not a doctor. I can only guess. 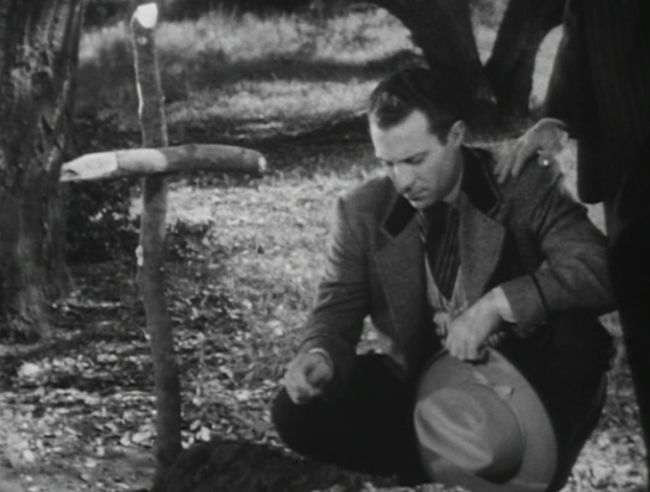 Deciding to step up their game now that they got Jeff-Jim killed, Idaho and Steve stand outside the Golden Eagle saloon, thought at this point I don’t know how they realize it’s where suspicious stuff is goin’ down. We in the audience know it, but Steve and Idaho probably don’t. While staking the place out, they see henchmen going in, though again I can’t tell you why that is inherently suspicious. Wouldn’t pretty much every man in town hang out at the bar? But then Capt. Randolph (Reeeeeeg!) arrives… 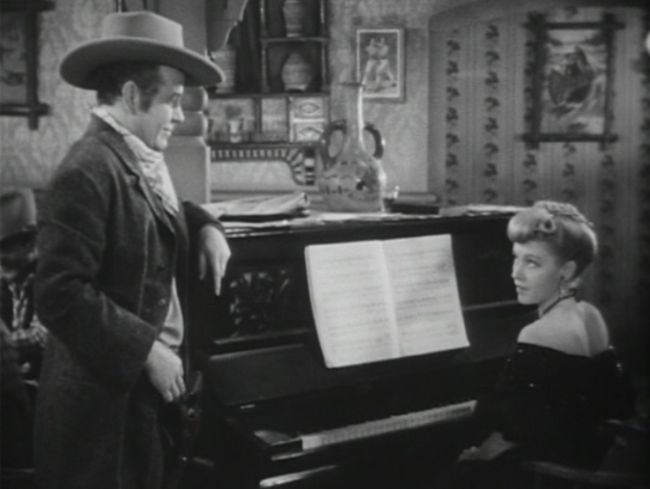 …and immediately starts mackin’ on a hot babe.

The gold robbing gang is upset that Clay would risk being seen in the Golden Eagle, and with good reason: Because he was seen going into the Golden Eagle. Steve watches him walk in and tells Cathy, who is hanging around on a balcony outside the Golden Eagle for no reason, that he and Clay attended West Point together. Curious as to Clay’s presence in Oro Grande, Steve joins him in the saloon. 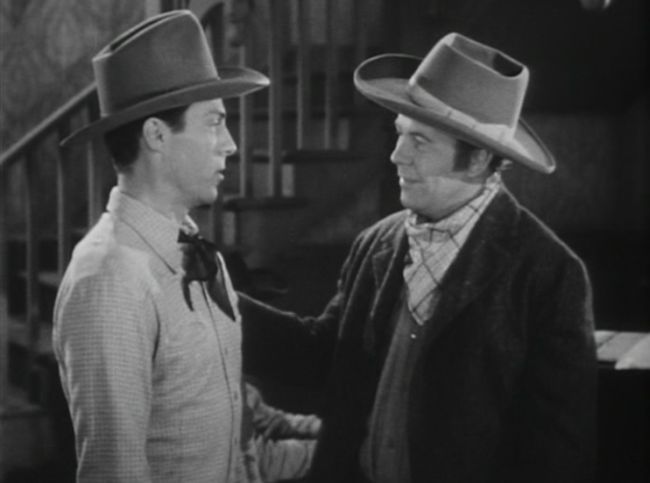 Dennis “Straight-Arms” Moore strikes again. Steve and Clay are nauseatingly polite to each other, but you know they just want to rip each others’ jugulars out and feast on them for dinner.

Trina and Alex are super, super upset that Clay and Steve went to school together, but Clay is also pretty pissed off himself, angry that Alex didn’t realize it would be better to keep Jeff-Jim alive to question him instead of chasing him until he got CRUSHED LIEK BUGG underneath Idaho Jones. Reeg has got a point here, but Alex is unimpressed, and when henchman Braddock later expresses his dislike of Capt. Clay, it becomes clear that no one in the gold theft ring is interested in keeping their token Confederate around anymore, even though they use him as their front to fool the Union Army. 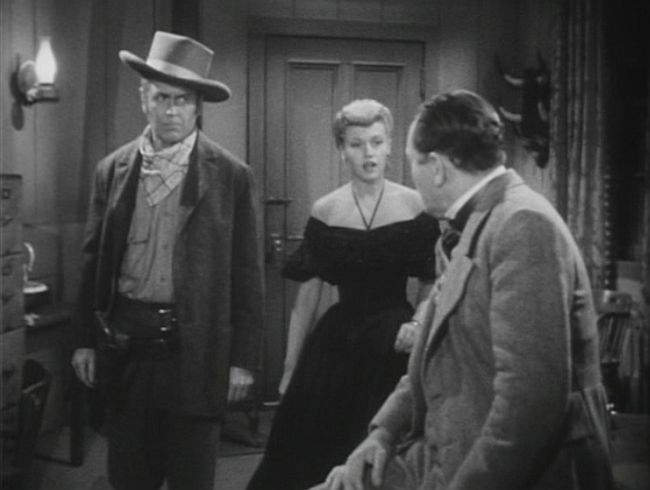 So Regis is hated by both the good guys and the bad guys right now, and I’m starting to really worry for his safety. I know he’s the bad guy. I do not care that he is the bad guy, he is not allowed to die or get kicked off the serial in any way. These are my orders and I will not compromise. 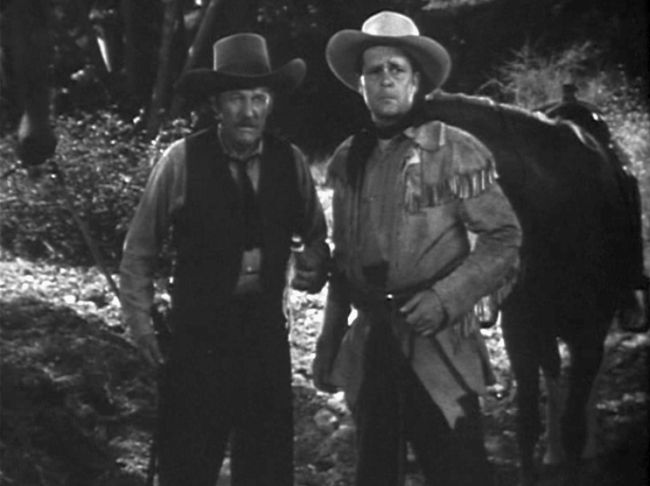 For my benefit as much as yours: These are the two main henchmen, Braddock (Jack Ingram) on the left, and Rawhide (Edmund Cobb) on the right. They’re following Steve, who is following Clay, who is heading out to Ghost City, but Clay knows he’s being followed… and Steve knows he’s gonna get followed, too, so he’s leaving some sticks with rags on them as a breadcrumb trail for the Cavalry to follow him. Confused? So’s the Cavalry! They haven’t done much of anything in this serial except show up after all the action has happened and stand around. Braddock and Rawhide, being a clever pair, move those markers Steve put down so the Cavalry starts riding the wrong way, not one soldier taking any other other trails or going to check out Ghost City, the well-known epicenter of villainy, because reasons. For being the good guys, the Union Army sure is full of dimwits. Steve gets to Ghost City and sneaks through town, following Clay, who is leading him straight to one of the abandoned buildings. 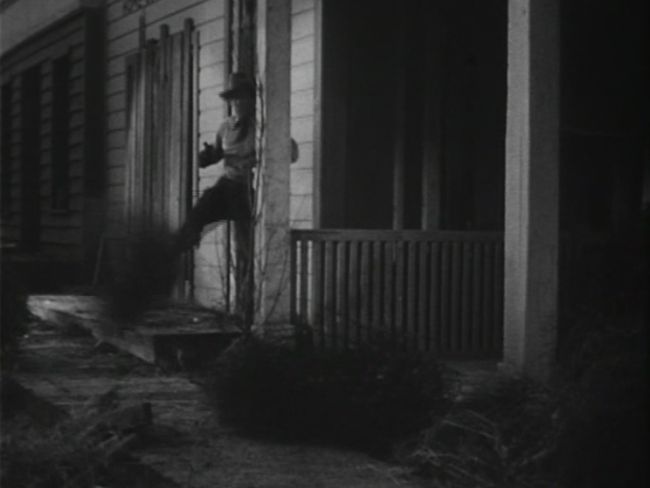 While sneaking about, Steve starts randomly kicking a bunch of tumbleweeds. 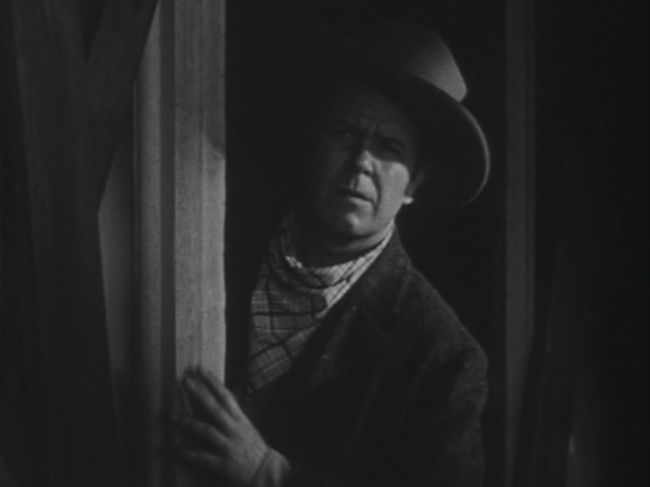 Even Regis has no fucking clue what this Dennis Moore guy is doing with the tumbleweeds.

So, as you have all undoubtedly figured out by now, Clay was luring Steve into a trap, and Steve is nothing if not consistent when it comes to traps, so he walks right into one of Ghost City’s abandoned buildings, only to be met with this: 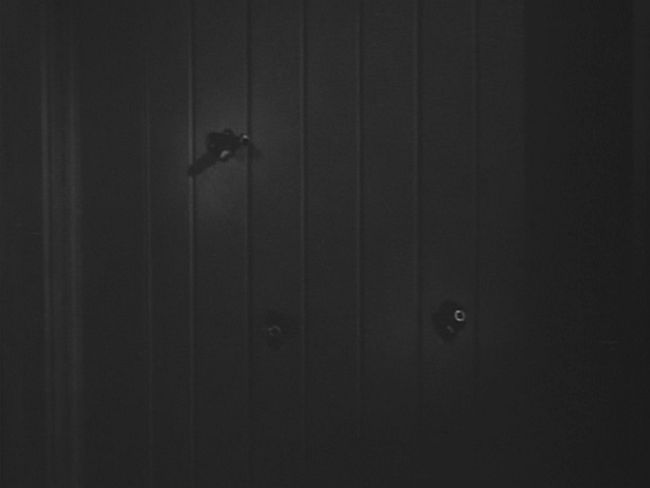 The bad guys hiding behind walls, poking their guns through holes, straight at Steve. Suddenly, all the bad guys go off at once and Steve is about to get it from all sides! What will happen? Can Steve escape the fury of their red hot guns? Tune in next week for more homoerotic entendres!