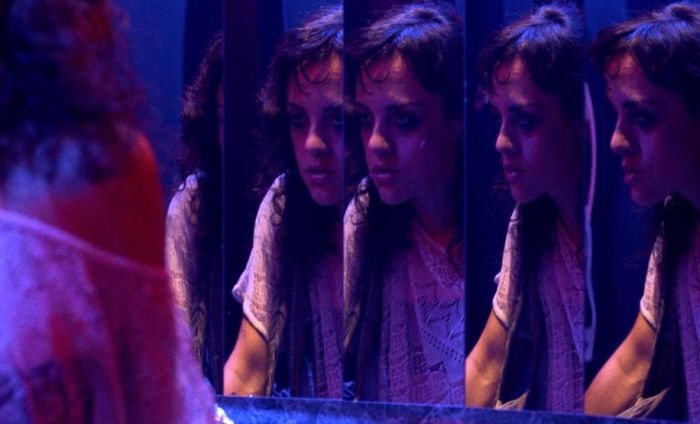 Gili (Sivan Levy) is a pretty, dark-haired teen who has just transferred to a new high school, and is already showing a healthy interest in the popular and handsome Tomer (Roy Nik). Just a quick text and selfie later, she finds herself on a hill overlooking the mall, giving Tomer an inexpert but ultimately effective hand job. He has no real interest in Gili, however, and quickly passes her on to his smarmy friend Omri (Eviatar Mor). That Gili goes along with this seems, at first, merely unfortunate, but her expected revelation that she’s being used never arrives. She brags to a group of popular girls that she is the one exploiting the boys, not the other way around, and for a while, it seems that she might be telling the truth. Then Shabat (Niv Zilberberg) enters the picture, a chubby teenage boy existing on the outskirts of the cool, upper class world of Omri and Tomer, and the full extent of Gili’s exploitation becomes clear.

S#x Acts, the debut outing from Israeli director Jonathan Gurfinkel, is brutal and fragmented, a meditation on modern day teen culture and the too-common casual disregard of basic boundaries and respect. The teens in this film are almost all affluent, living in palatial homes, owning their own large SUVs and nightclubs, and notably have no adults in their lives save a few early 20-somethings in the same socioeconomic class.

Levy gives a stunning performance as Gili, a believable and compelling character, made so by Levy’s occasional, well-placed moments that make it clear that the girl herself may never know why she has such self-destructive tendencies. Unfortunately, the screenplay has no intention of informing the audience, either. Gili believes the only thing she has to offer anyone is her body, and the film fails to acknowledge that such an assumption is troubling in and of itself.

In turn, much of what S#x Acts promotes as an exploration of teen mores in a culture obsessed with social media instead comes across as moralizing. The film has the feel of a cautionary tale that informs teen girls to stay on their side of the metaphorical railroad tracks, especially as the popular, well-off girls sleep with the same boys Gili dallies with yet suffer no consequences. Whether this is due to ingrained cultural double standards or the necessities of plot is unclear. All we know is that each sexual encounter Gili participates in becomes more harrowing, and without a clear explanation, these scenes seem far more concerned with shock value and titillation than sociocultural examination. If character study, tragedy or social concern were the goal, S#x Acts misses the mark by a mile, heading straight for exploitation so blatant that the film is at times reminiscent of the Dwain Esper flicks of the 1930s.

That’s why it’s impossible to reconcile the film’s publicity, which touts Gili’s sexual encounters with her classmates as “flirting with the grey zone of sexual abuse,” with scenes where Gili repeatedly tells a boy no as he penetrates her anyway. This is a film which carefully chose the most sympathetic of the teen boys as the one who commits the most egregious disregard for consent, perhaps in an attempt to turn audience expectation on its ear. But the parade of escalating atrocities committed on an obviously troubled girl is nothing new, neither in reality nor on the big screen, and S#x Acts fails to tell this age-old story in a particularly compelling way. S#x Acts merely holds up a flat mirror to the world, with no more insight or energy to its message than a page of statistics, and the only thing it manages to prove is that a lot of people have a very fuzzy definition of the word “no.”