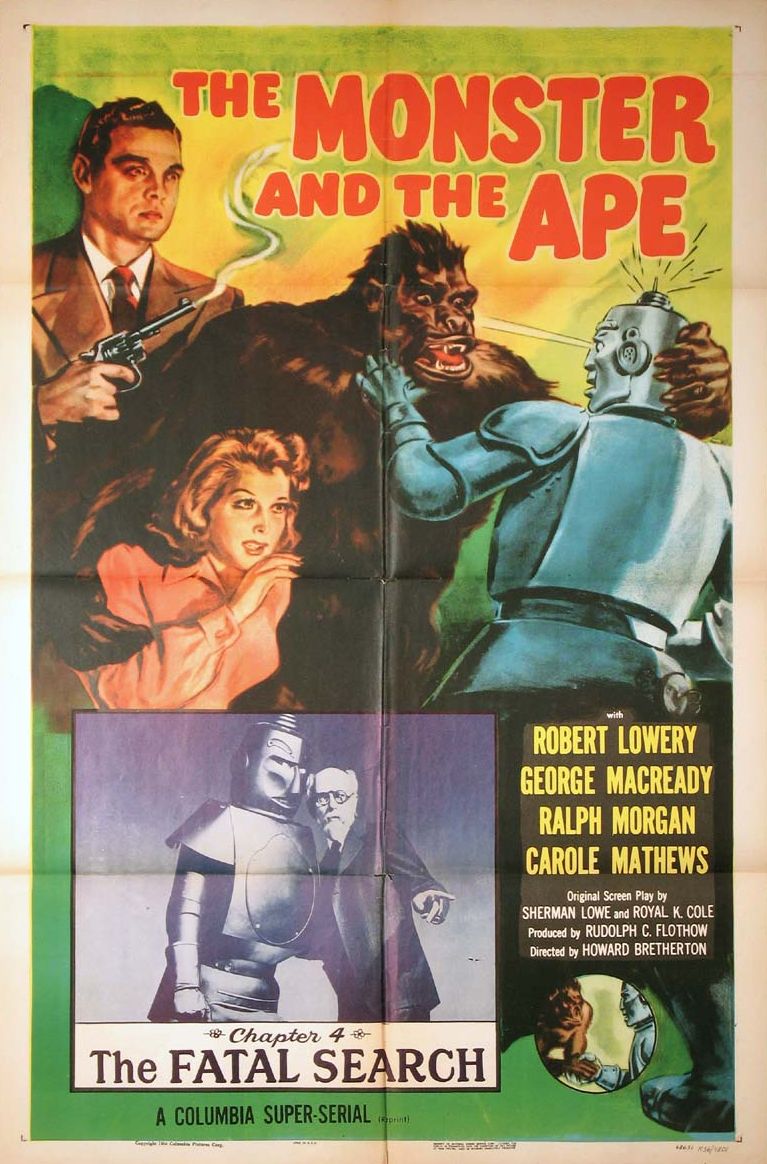 The Monster and the Ape #4
The Fatal Search

For those of you playing The Monster and the Ape Home Game, the episode should start at approximately 1 hour 10 minutes in the OV Guide video. 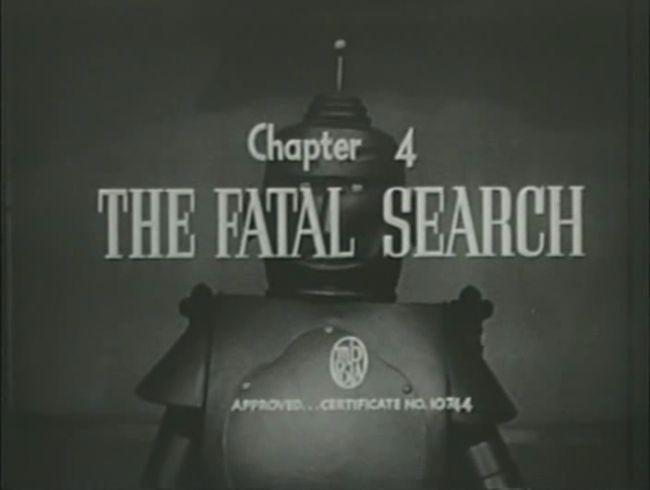 This chapter begins with our narrator, an obvious espresso fiend and probably the star of Dwain Esper’s Caffeine Madness!, telling us pretty much nothing of substance in this recap except the showcase action of last chapter — a fistfight — and we get to see the fight all over again, because there is no excuse The Monster and the Ape will not take to show a few punches being thrown: 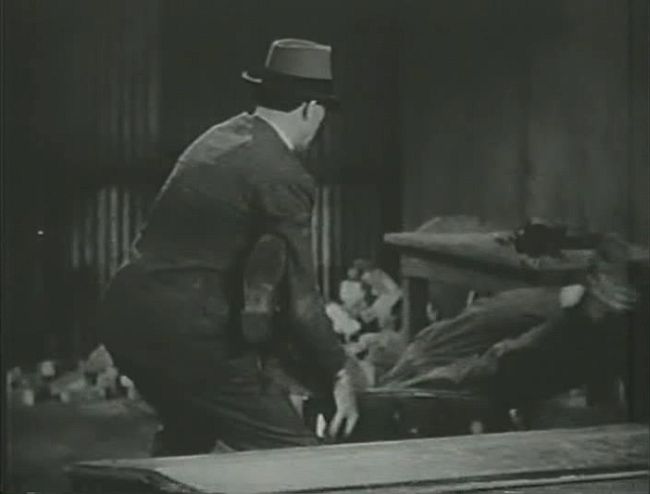 That’s Ken’s feet splayed proudly for our viewing enjoyment, one almost off the right side of the frame, the other planted snugly inside a henchman’s armpit. Soon after, he is knocked out on the conveyor belt, where he can be seen both unconscious and carefully adjusting his feet and shoulders, so he can easily slide into the furnace. Such a polite young man.

When we last left what this pathetic serial calls our hero, Ken was gliding gently into the world’s largest Easy-Bake Oven, the doors closing behind him. A refresher screencap: 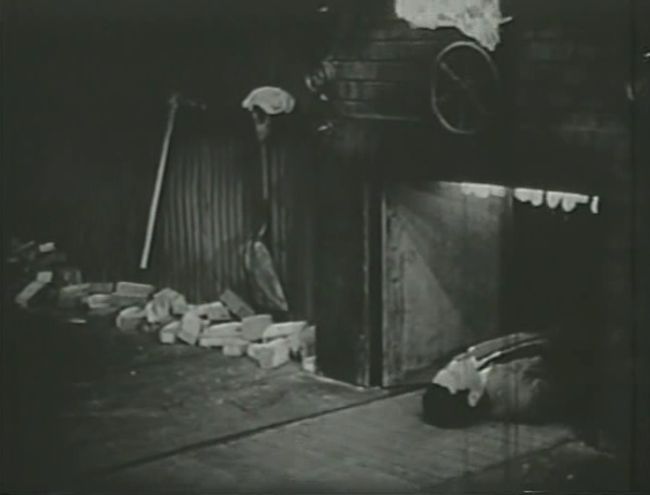 We think we’re going to see him get sent into the furnace again, but no! The serial cheats! He jumps off the belt before he gets anywhere near those doors! Those bastards just cut the film about five seconds earlier than they did in the last chapter. Oooh, serial, I am disappoint.

So Ken is spared roasting and my hopes for discovering that Monster and the Ape was a proto-The Cook, The Thief, His Wife and Her Lover are dashed. Ken jostles the henchmen about and everyone runs into poor elderly tied-up Ralph Morgan at least twice, because the stunt punchers have all the coordination of a drunken doberman. Then a henchman gets shot in the shoulder, but it doesn’t stop him for even a moment, and they still all run off because Ken sucks at subduing the baddies. He manages to untie a couple of knots holding Babs and Professor Arnold to their chairs, though, and also busts out of the locked building, which is handy, I guess, if you’re into that whole ineffectual thing. They all climb out of the shattered door to find themselves in the middle of nowhere without transportation, so our intrepid trio begin their long walk to town.

Meanwhile, Prof. Ernst has the Metalogen, and is driving back to town with it stowed in a coffee can inside a satchel which, as we learned in The Phantom Creeps, is the safest place to store your radioactive isotopes. 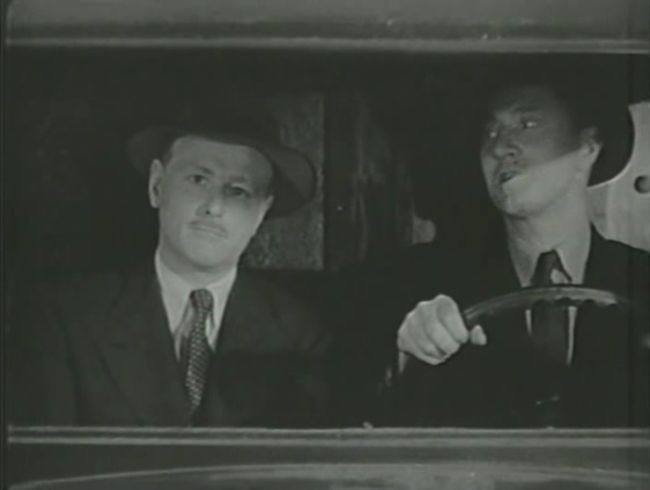 George has looked directly into the camera in every episode. Why won’t anyone stop him?

Evil Doctor Professor Ernst and Not Nordik — character name Blake, acting guy Eddie Parker, best known for about 300 “Man Doing Something” roles — are heading back to the zoo, where we find Dick Nordik shoveling meat into cages. 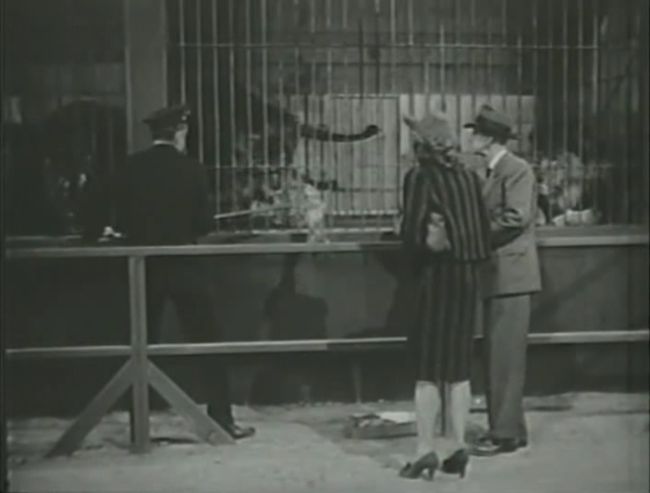 Those repulsed extras watching the raw meat shoving are the best actors in this serial so far. That’s not a joke, it’s the truth.

Ernst — in broad daylight, with patrons milling about — tells Dick Nordik that he has the Metalogen (“It’s in this sack”) and it needs to go back to his lab. While this is going on, Crash Corrigan in a monkey suit, standing in his cage behind Nordik, is screwing with actor Jack Ingram again, hitting him in the head repeatedly as they film this scene. 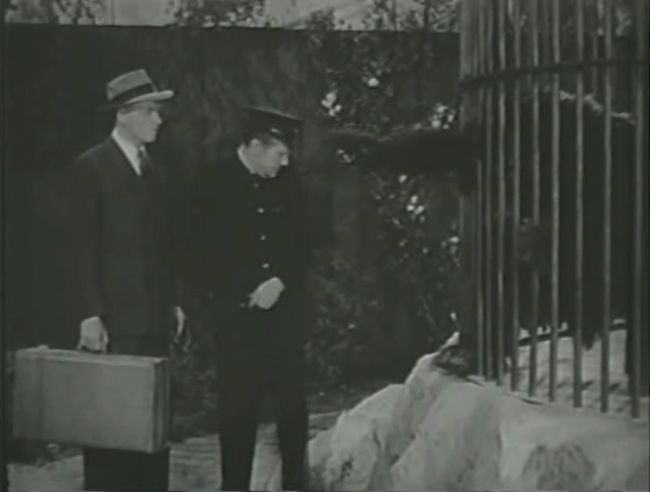 By the time Nordik and Ernst have finished talking, Crash is shoving his monkey foot out through the bars, desperate to get into the frame. Neither MacReady nor Ingram are amused.

And now it’s time for more cave walkin’ action, as Nordik takes the suitcase through three minutes of secret passageways and into Ernst’s home. While he does this, I realize that it’s the same set used for one of the quickly killed-off professors from the first episode, the one who looked to the right, then just as he looked to the left, Crash jumped on him and rassled him to death.

We go through all of Nordik’s sneaking around only to have Ernst show up and walk right in just as Nordik arrives, proving that there was never any damn need for these cave-walkin’ shenanigans, because Ernst could have just kept the Metalogen and walked in the front door with it. No one on earth would suspect a professor walking into his own home with a suitcase. It’s filler! This whole episode is filler! Filler, like the parking lot walking in Hot Rods to Hell, or any scene with Ashley in Gone With the Wind.

Back at Prof. Arnold’s lab, he tries some other metal in the robot, maybe some ground up zinc lozenges, who knows, to get M-Bot activated again. And it works! 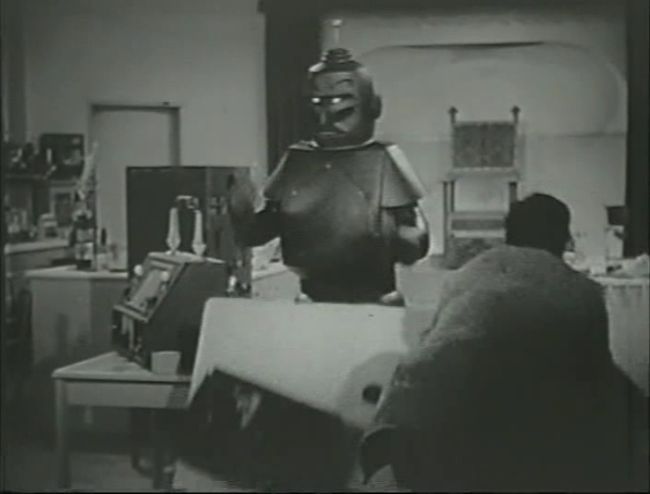 Sort of. But at least we know there is a robot in this serial. It was hard to tell for a while there, and I’ve taken to calling this serial “The Monkey and the Ape” because of the robot drought.

M-Bot, powered by whatever the other metal was, started trashing the place like an early-70s arena rock band, which Arnold takes as being a sign that his substitution Metalogen measure is not working. The truth of the matter is that Ernst can see into the lab and was controlling the robot by remote control. 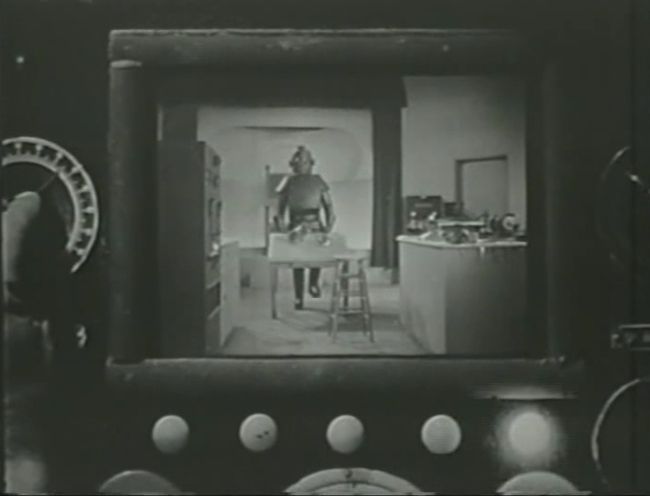 But here’s the thing, or actually three things, and I’m gonna list them so you can see how ridiculous this serial has gotten already, even with nine full chapters left to go:

(1) The radio monitoring equipment was discovered back in chapter two, and removed;
(2) It was this removal that required Nordik to eavesdrop outside the lab’s window and report back to Ernst so he knows what’s going on, something which Nordik is still doing as this scene plays out;
(3) Once M-Bot is discovered to be a renegade table-flipping machine out to destroy the world, he’s turned off and the substitute Metalogen removed. Ernst’s monitoring equipment stops at that point, leading us to think that the substitute Metalogen must have been sabotaged by Ernst, with new radio monitoring installed in it. Sadly, even that doesn’t make sense. After M-Bot is subdued, Arnold immediately goes over to his cupboard to bring out… a radio wave detector machine, which somehow doesn’t detect a thing even though we see, right there, we freakin’ see Ernst peering into the lab via some kind of remote radio device. If the substitute Metalogen had been sabotaged, Arnold’s detector would have shown it.

Oh, and I have no idea if the other metal Prof. Arnold used worked, in that it allowed the robot to be turned on, or if the robot has always worked but Arnold doesn’t know it since it’s controlled by Ernst from afar. My guess is the screenwriters themselves couldn’t answer that question. 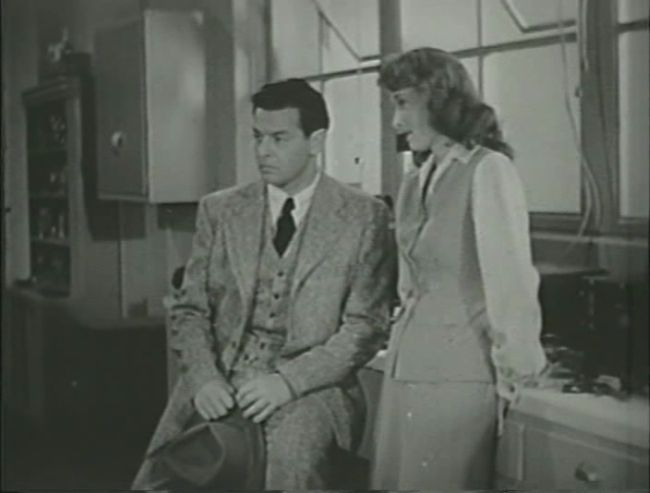 Ken attempts thinking about his hat and his tweedy three-piece suit at the same time. A migraine ensues. Babs laughs at him.

Meanwhile, Flash is scared of the robot, which all the white folks snicker at because racism, though I would like to point out that Flash is the only sensible dude in this scenario, since M-Bot is being controlled by an evil scientist who wants all these chuckleheaded honkies as dead as possible. Fear is logical; smug is not.

Prof. Arnold and Ken hop in the car with that radio wave detector machine, which coincidentally also detects Metalogen because that just makes scads of sense, and they drive randomly around looking for signals. The needle that detects the metal, by the way? A compass. 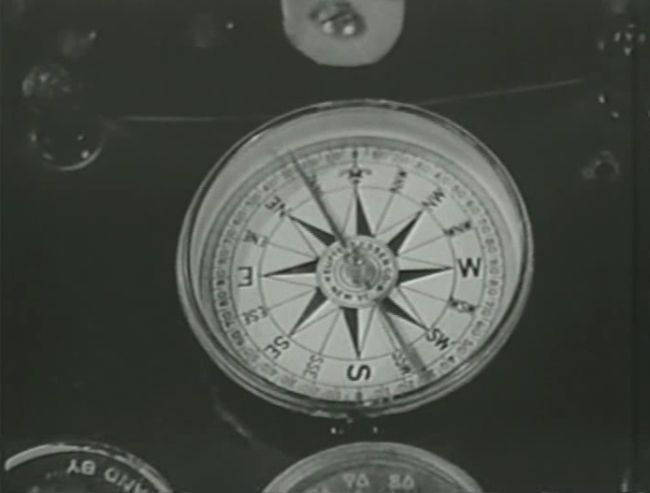 Outside of town (how long were they driving, anyway?) they find an old shed where Nordik and Not Nordik have taken the Metalogen, but when Ken and Arnold arrive, the henchmen hide. Ken goes running in and sees the satchel under a cot. As he’s about to make off with it, Nordik jumps on his back, and another fistfight breaks out. 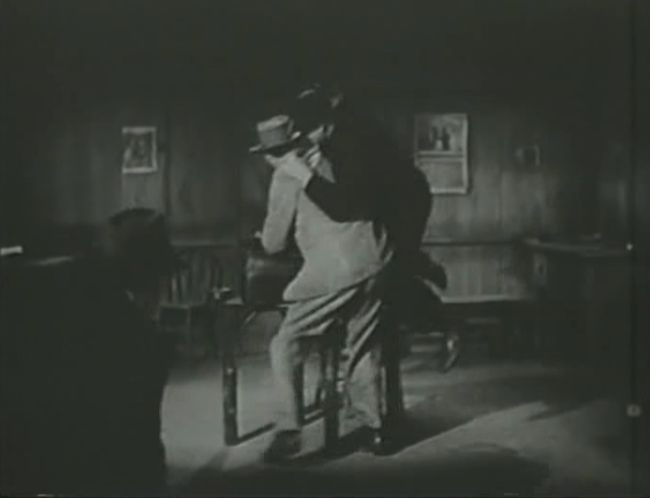 The picture on the left wall is M-Bot and Babs in happier days, while the calendar on the middle wall was a subscription premium from Fistfights Monthly Magazine.

In the melee, a cigarette falls to the floor, then a poorly-aimed shot leads to gasoline pouring out all over the place… 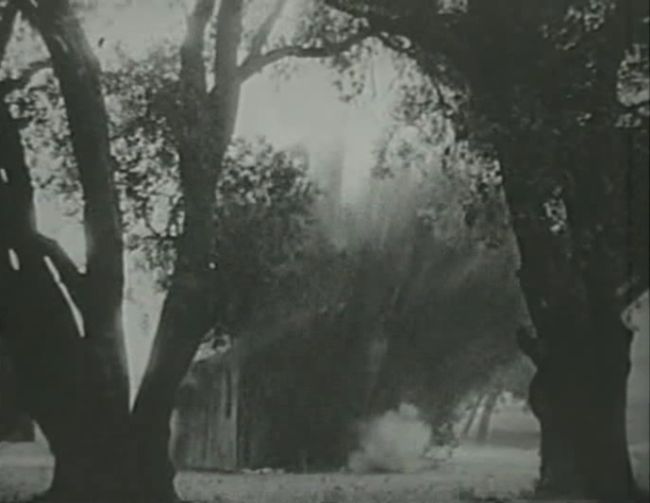 And kaboom. Ken’s in there, by the way, but by next episode he will have left three hours before the explosion.

Moderately interesting thing: A new character is being introduced next week! You can see him in the poster used above; no, I don’t know why a character who doesn’t even appear until Chapter 5 shows up in the promos for Chapter 4. Also, don’t look too closely or you’ll figure things out you shouldn’t yet know! 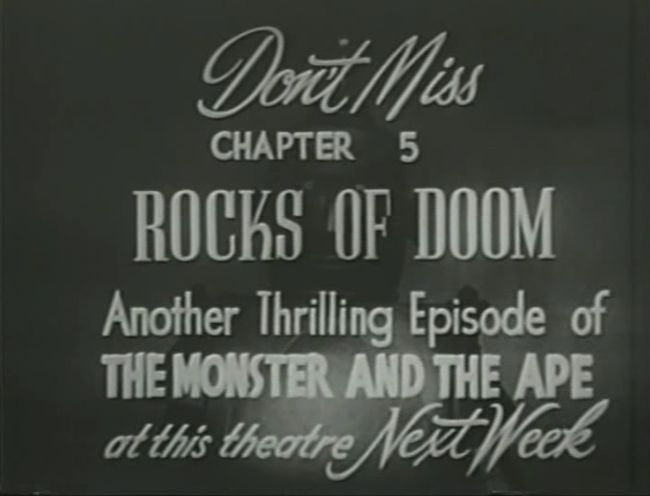