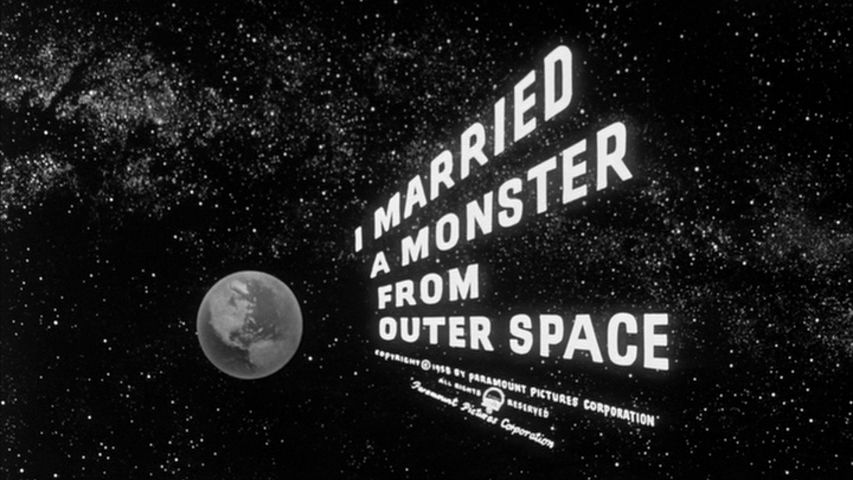 I Married a Monster from Outer Space one of the quintessential 1950s scifi B-movies, a fun and suspenseful story with a lot of potential readings to be had, everything from Communist paranoia to feminism to repressed hetero- and homosexuality. Though it came late in the 1950s scifi cycle, it was popular enough to be influential; much of the overall aesthetic was stolen by Teenagers from Outer Space, for example. 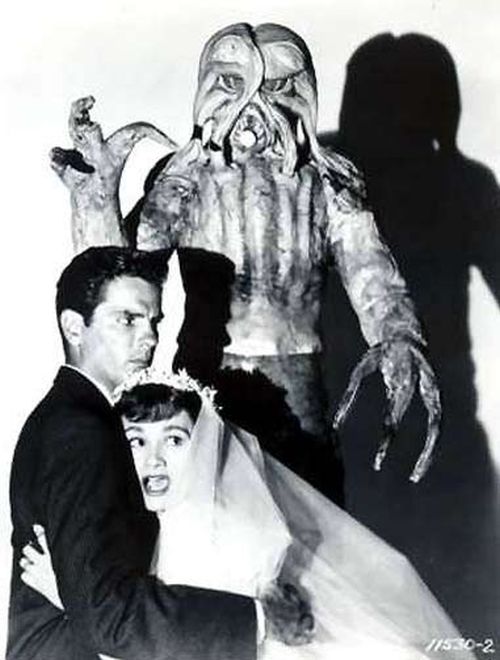 But it never took itself too seriously, which is one of the reasons I Married a Monster remains so much fun even today. The promotional material alone shows the production was attempting deliberate camp, but rather than go full-on She-Creature with “the mammary monster” and sweaters three sizes too small, I Married a Monster more closely resembles the original Invasion of the Body Snatchers. It’s quiet, subtle, scary, and even touching at times. 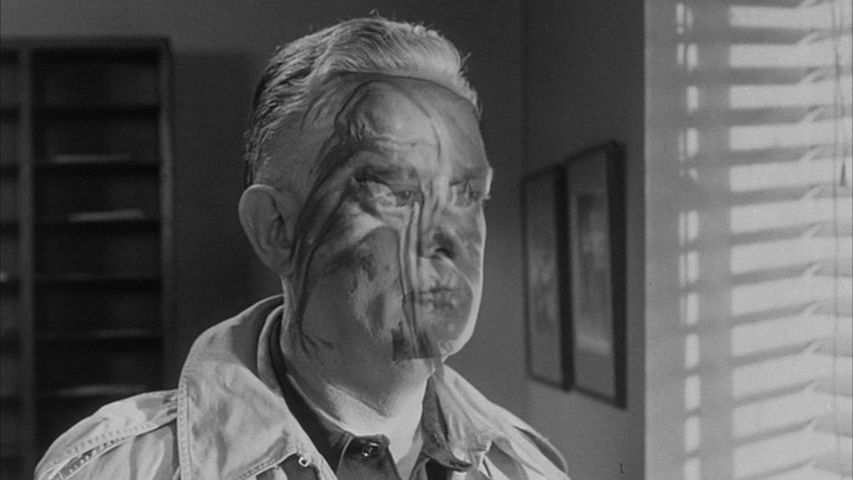 IMaMfOS was featured on SBBN a few years ago here, an article that goes more deeply into the film, but there are spoilers, so be warned. That was a post written after viewing copy grabbed off of TCM, but the screen grabs in this post are from the Warner Archives DVD, and you can see they’re much better quality. Thus far, all of the Warner Archive MOD DVDs have been nice prints. There are no special features, but this disc has subtitles in English.

My friends, if you really enjoy soap opera kitsch, The Carpetbaggers is for you. Brazenly combining Giant with a Jacqueline Susanne novel, The Carpetbaggers tells the story of a big jerk (George Peppard) and his myriad mental illnesses, the worst of which is psychopathy. All of this goes down during the 1920s through 1940s, and characters seem startlingly prescient about what trends of the day will become major technological advancements, amidst so many really skeevy double entendres that this film would have been given at least ten SBBN Official What The Shit Is This Awards had I ever seen it scheduled to play on TCM.

Angry and spoiled Jonas Cord (George Peppard) inherits the family business after he pesters his father to death, and immediately begins running roughshod over the family lawyer (Lou Ayers), his long-time pal Nevada Smith (Alan Ladd), and his father’s pretty young wife Rina (Carroll Baker). He turns the business into one of those ridiculously successful affairs, where any competing business can be purchased at any time, and his major decisions are never wrong. He can fly a plane, direct a movie and service two women at the same time, all while being the most irritating person in the world. A whole bunch of unbelievable things happen as we wonder about his mental health, but the film is too scared to go all the way and take the most entertaining route to resolution, so even that is disappointing.

The Carpetbaggers recently made a brief appearance on SBBN in my Italian Horror Blogathon post on Carroll Baker’s Orgasmo (1969). Baker signed with Carpetbaggers producer Joe Levine after this film became a smash hit, but he immediately cast her in another role that was so similar to the character of Rina that it hurt her career. She tried to get out of the agreement but Levine went on a quest to ruin her in Hollywood, which was sadly successful.

Martin Balsam is wonderful in The Carpetbaggers, though, and Robert Cummings gives a really fun performance. Alan Ladd is quite good as well; he would sadly die before the film premiered. Lew Ayers has a cathartic final scene that will leave you cheering, and look for Audrey Totter in a small but featured role. The Warner Archive MOD DVD is a good print but not fully restored, so a little faded and brown from age. The disc has no special features but does include English subtitles. 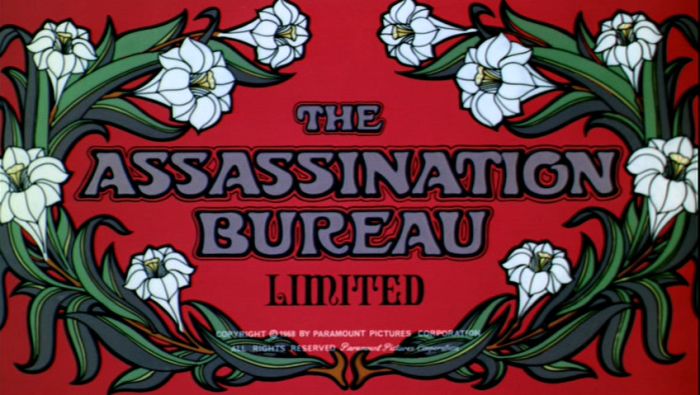 Sonya Winter (Diana Rigg), a turn-of-the-last-century feminist intent on becoming an investigative journalist, discovers a series of mysterious personal ads are placed just days before political assassinations are carried out. Promising to get to the bottom of this mystery, she gets herself hired on at the newspaper owned by Lord Bostwick (Telly Savalas) to dig out the story. Soon she manages an appointment with Ivan Dragomiloff (Oliver Reed), the head of what is known as The Assassination Bureau, Ltd. Consisting of a team of assassins hired to wipe out evil — for a hefty sum, of course — Ivan has no moral qualms with his job. But Sonya does, so she finagles a promise out of him to kill someone for her: Ivan himself. Deciding this is amusing as well as an opportunity to take out the assassins he feels are only in it for the money, he announces to the Bureau that they must kill him for the £20,000 payout, or he’ll kill them first.

In the tradition of The Wrong Box (1966), The Assassination Bureau is a campy historical satire that both pokes fun at Victorian era stuffiness while remaining somewhat nostalgic for these bygone days. There is a bit of a limit to the laughs in Assassination Bureau, however, which are almost entirely had at the expense of Sonya Winter, seen as silly and ridiculous for being a feminist. Her character arc is meant to turn her into a real woman, which is a big problem for a lot of films of this type; they’re almost instructional manuals for modern girls, explicitly stating that wanting a career or having certain values is disapproved of by everyone, and you need to put out for anyone to like you. See also: Grease.

That stickin’-it-to-the-feminists tendency really undermines what is an otherwise fun film, because it means some jokes are forced to fit the sociopolitical agenda, and some lines uttered by Ivan sound a hell of a lot more like Oliver Reed than they do the character he is supposed to play. Rigg also disappears for most of the finale, resulting in a weak ending to the film.

Still, this is a funny movie. 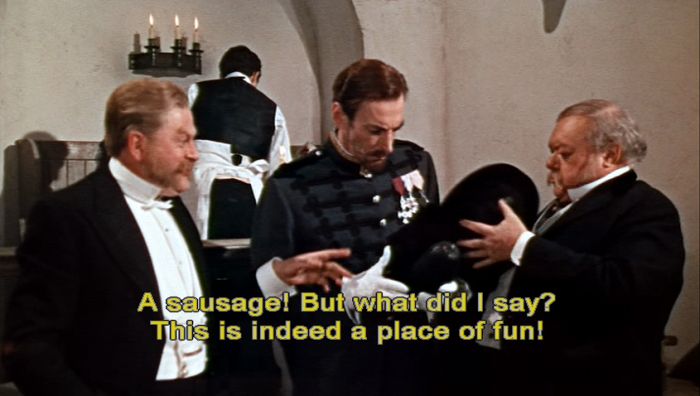 Oliver Reed plays straight during much of the wacky chaos, and does so well at it that you somewhat wish this story, based on an unfinished book by Jack London, had been presented as an actual adventure rather than a satire. Reed’s ability to go all in on lesser roles completely makes this film, and has elevated more than one movie; Burnt Offerings (1976) is one of the best examples, but Assassination Bureau is another fine performance in the midst of a very silly movie. Telly Savalas doesn’t stretch much in his role, but he’s reliable and solid and always entertaining.

The sets are great, the costumes lovely, and the cast of characters is unparalleled. Supporting parts by actors such as Clive Revill and Curd Jurgens, who is terrific, really make this film. You won’t be able to get past the many resemblances to The Wrong Box, and Assassination Bureau compares slightly unfavorably to the 1966 film, but it’s still a fun romp. Also, zeppelins. The Warner Archive MOD DVD comes with subtitles and scene selections. 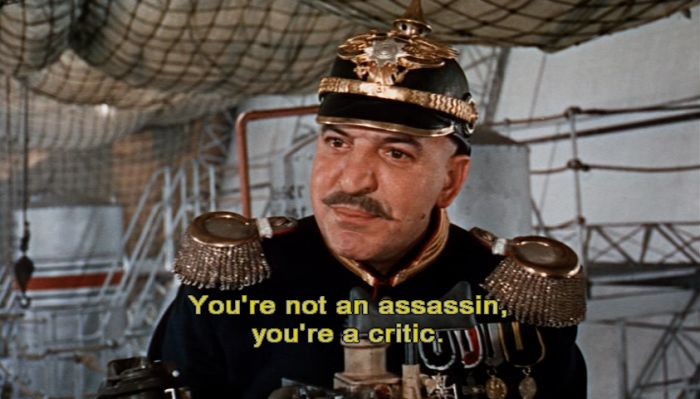 And did I mention this movie is funny?