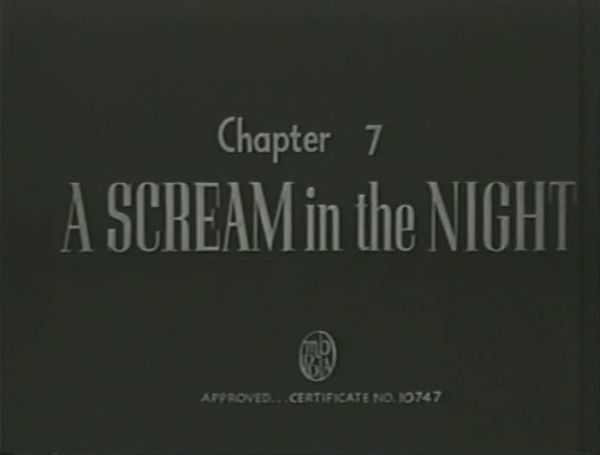 The Monster and the Ape #7:
A Scream in the Night

For those playing The Monster and the Ape home game, this episode should begin at about 2:06:30 in the OV Guide version. And again, my apologies for missing last week and being late this week; anyone who has been watching along has every right to be irritated with me, because who watches these things unless there’s some kind of benefit from it? Especially this episode… but I get ahead of myself. 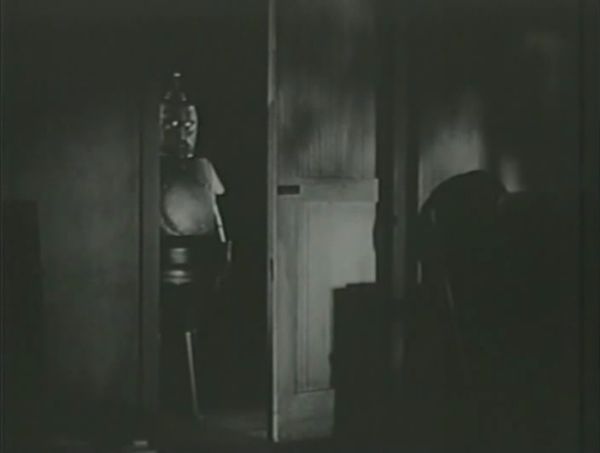 We don’t get to see “the monster” all that much, but when we do, he is kinda creepy. It’s those lightbulb eyes, I think. Remember how, after The Amityville Horror, those dark sunglasses with single small LED red lights in the middle of them were so popular? So any punk with $1.99 to spare could grab a pair and walk around at night scaring the shit out of people? That’s what M-Bot’s beady little eyes remind me of.

Over footage of another delicious Monster And Ape Brand Fistfight ™ located in what is apparently an abandoned paint factory, our excitable recap narrator informs us that this factory is closed because of the ongoing war. Handy to know, but it raises more questions, primarily, “Why does a paint factory that is closed for the duration still have an enormous stone pit full of mystery flammable fluids, which have neither been drained out during the hiatus, nor have evaporated, nor have caused the building to be uninhabitable due to fumes?” 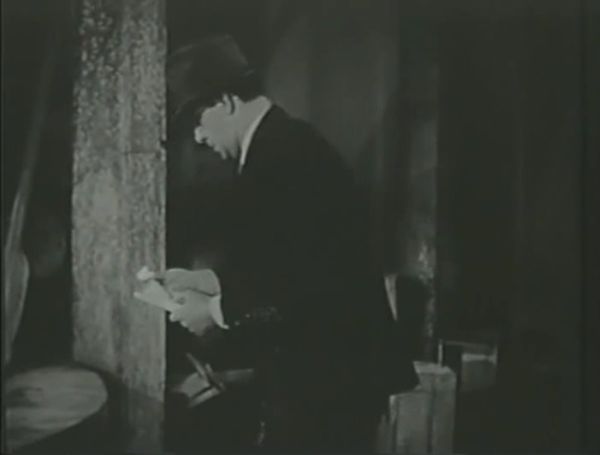 Yet this recap manages something that none of the previous six chapters have: To inform. Unlike in the last chapter, we see Ernst, still in his Fake Draper costume, controlling the robot. We also see one of the henchmen at the factory deliberately lighting the mystery fluid pit. Clarity!

The henchmen skedaddle and Flash, previously knocked unconscious, wakes up just in time to join Ken in being menaced by the Metalogen Man who is threatening them with an enormous chunk of styrofoam that he pretends is really super heavy. 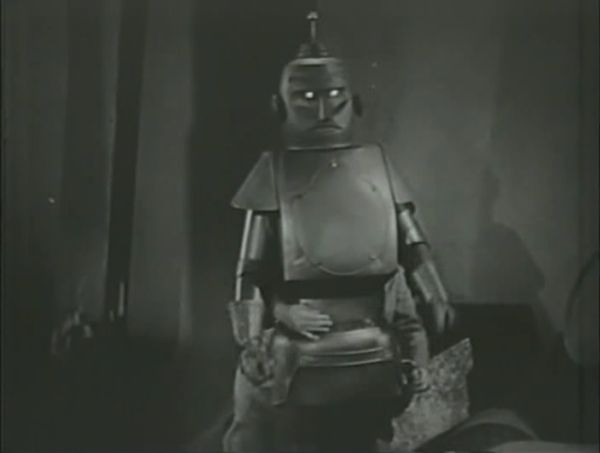 Ken disables the monstrous M-Bot by touching him inappropriately.

Ernst, angry at his failure to smash Ken to bits, stomps around petulantly, then yells at his henchmen as they arrive back at his lair. The henchmen, by the way, are both named Joe, I assume due to a quick casting need when they realized while filming the serial that Dick Nordik would have to be seen working at the zoo and couldn’t always be part of Ernst’s necessary pair of henchmen. Anthony Warde is henchman Joe Flint — Warde’s last film was The Carpetbaggers, recently blurbed here on SBBN — and Ted Mapes is Joe Butler, and he is a terrible actor.

As Ernst raves, a henchman bitches right back at him: “It’s not us, you’re the one who bungled everything!” And then Ernst apologizes! 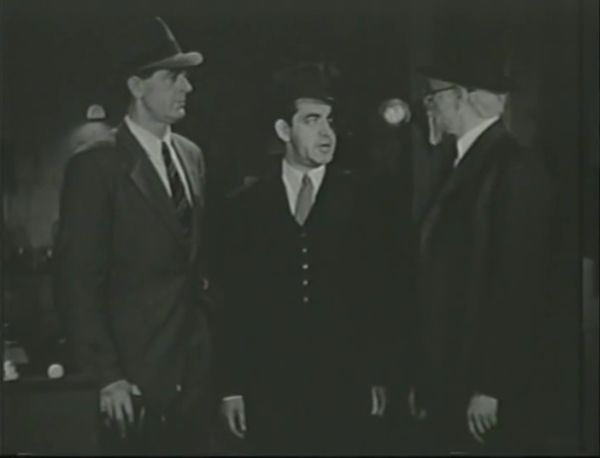 A henchman sasses his boss and gets an apology? I… I don’t know what is happening anymore.

Back at the lab, our trio of dinks, none of whom are complete idiots, yet all of whom clearly fall somewhere on the Scale of Idiocy, are starting to think that maybe Fake Draper is responsible for some of these thefts and fistfights and other unsavory things that have been going on as of late. 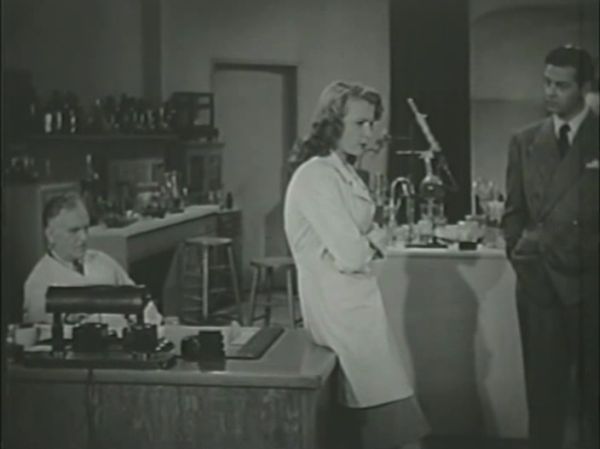 Just then, Fake Draper arrives at the lab and suggests they go driving around for metalogen again, so Ken, who of course still thinks this is the real Draper, shows him the detector, which was busted all to hell in that paint factory fistfight. Ken, who did not have his Wheaties this morning, then heavily implies he thinks Fake Draper is a cad and a scoundrel. 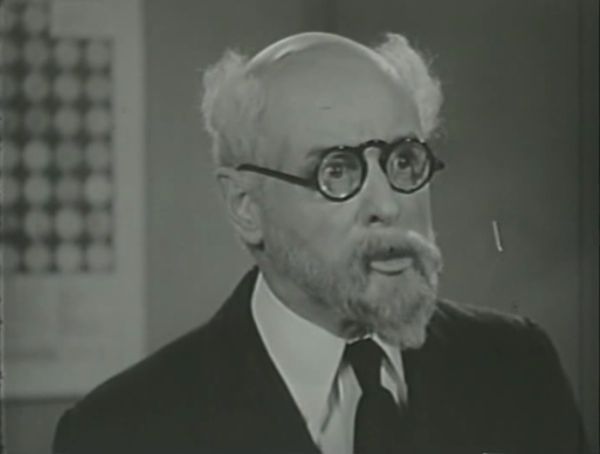 Ernst as Fake Draper completely loses his cookies because his detector is broken, though he had always secretly planned on using its likely destruction as a reason to tear up the contract he had with Arnold. He rips the contract in half and starts chewing Ken out. This is the angriest he’s ever been! He storms off, telling them to just keep the broken detector, and he’ll see them in court.

Prof. Arnold mildly scolds Ken for being so rude to a scientist, and feels it would be best that they fix the detector, find some metalogen and keep Draper in on the deal, as a way of making up to him the fact that Ken is a terrific dinkerplatz. Meanwhile, Ken pitches his own little fit. “I’ll never stop being a smart-ass to scientists! Never!” he vows as he stomps his feet and storms off.

Time passes, and it becomes clear that rubber cement and pipe cleaners and little pairs of googly eyes aren’t enough to fix the detector, so Ken sets out to find Dr. Draper. What he discovers at Draper’s lab is that Draper had been found with a fractured skull and has been in the hospital for several days, and couldn’t possibly have been at Prof. Arnold’s lab the prior week. Ken goes to the hospital, where Draper manages to tell him about the film that was being recorded as he was attacked. 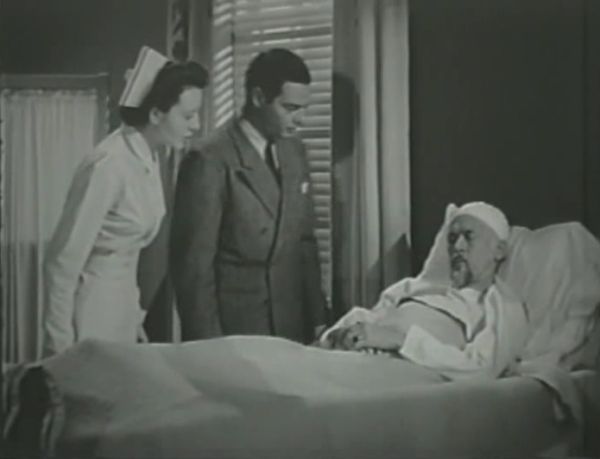 Ken gets the film and takes it back to Prof. Arnold’s lab, where he smugly announces that he was right all along: Draper was Ernst, a total nogoodnik! Ugh, Ken is so repulsive when he’s smug. 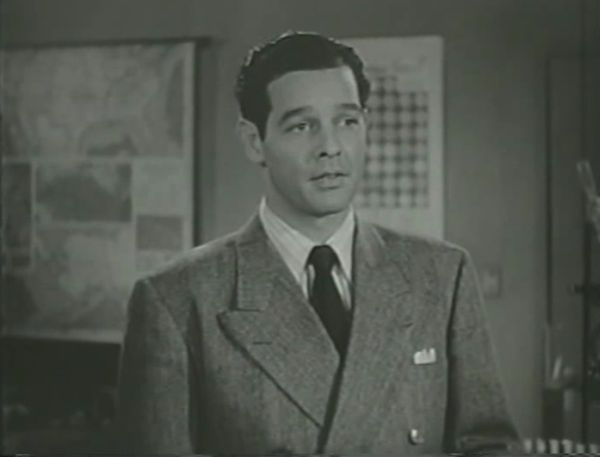 And is Ken sporting a conk?

They all watch the film and this entire sequence is just stupidity on parade: They clearly see within the first few seconds that it’s Ernst who has attacked the real Dr. Draper, but keep watching intently like they haven’t figured out what’s going on. The film from the video tape has edits and cuts and angle changes, too, which is impossible of course, but apparently no one involved in the making of this serial realized that. Aaaand nobody says anything! No gasps when Draper is almost killed, no concern when Ernst shoves his lifeless body into a closet, no “holy shit it was Ernst the whole time,” nothing. They just watch it and then say they must do something about Ernst. 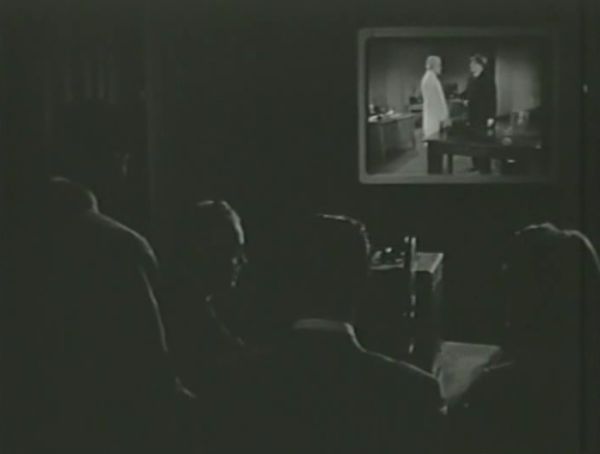 Which the men head out to do, while Carol stays behind and does paperwork in the lab. Unfortunately, Ernst has decided to get his monkey out of storage, thus the poor, beleaguered Dick Nordik is once again forced away from a good paying job at the zoo — with benefits! — to drag an uncooperative stuntman in a gorilla suit around the set. 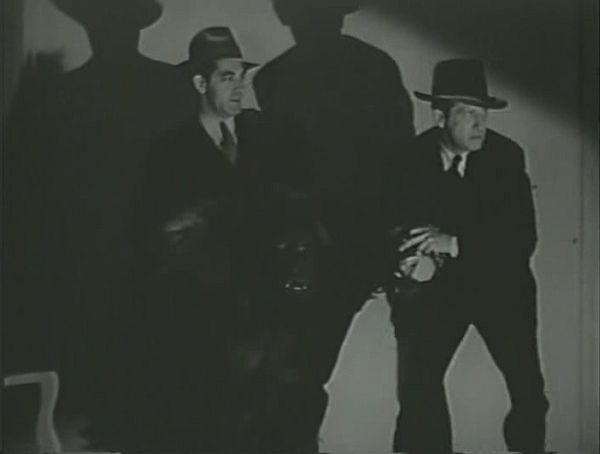 They take Thor the gorilla directly to the laboratory. Carol must have some earbuds in because she doesn’t hear this 9,000 pound monkey opening the door just two feet behind her or sneaking up on her until it’s too late. She’s grabbed and tossed around for an entirely inappropriate amount of time. 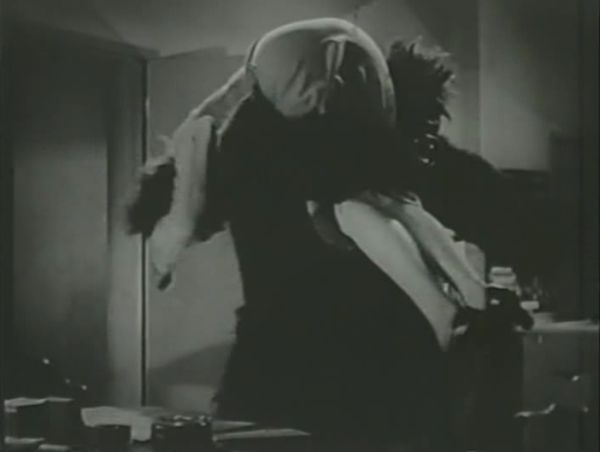 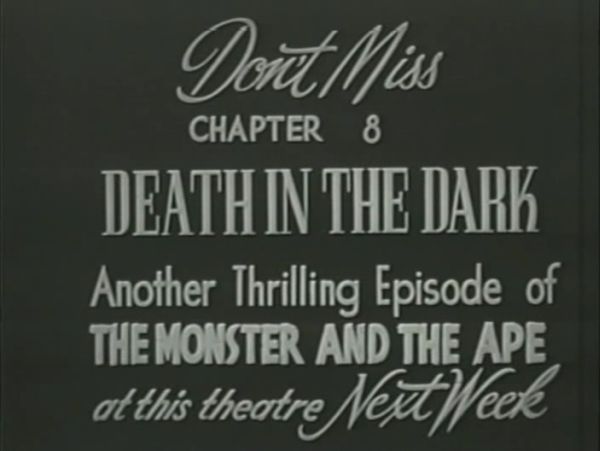 I learned the hard way to pay attention to which chapters an actor is listed for on the IMDb (“Raiders of Ghost City: Regis Toomey as Capt. Clay Randolph [Chs. 1-6]”) but I don’t see anyone on the list who obviously kicks it in the next chapter, so I guess we’ll have to wait until Thursday to find out if this teaser is lying to us or not.