The later films from Bette Davis’ studio years are always interesting, because her real life had intruded so heavily into her working life and Hollywood image that she was forced into a sort of typecasting, being suited — at least according to studios and audiences — only for characters with a hard edge to them, women who had lived expansive and interesting lives. Hollywood has always been about physical appearance, and around 1941, Bette began to age quickly, as has been noted more times than anyone cares to count. Her voice deepened, her eyelids grew heavier, and her every movement conveyed a bitter East Coast weariness. And it all happened within just a few short years; a hairstyle that in 1941’s The Great Lie looked terrific on her was completely age inappropriate less than five years later.

This was never more evident than in Mr. Skeffington (1944). Bette was a hard drinker and heavy smoker, and it showed to the extent that her earlier scenes as Fannie Skeffington were more than a little strained. Beyond that, her husband Arthur Farnsworth had died suddenly just prior to filming, which understandably aged her. His strange death after falling on a sidewalk on Hollywood Blvd. at such a young age caused a sensation. Rumors were rife that Bette and Arthur had a terrific public row which ended with her pushing him down a flight of stairs at their home. Those rumors turned into an inquest, and though Bette was cleared, to this day, people choose to believe she probably murdered him; these people are occasionally polite enough to say she “accidentally” pushed him down the stairs, but the implication is clear. The scandal and poor critical reception for Mr. Skeffington was not ignored by Warner Bros., who from then on out gave her roles that were specifically designed for older women. 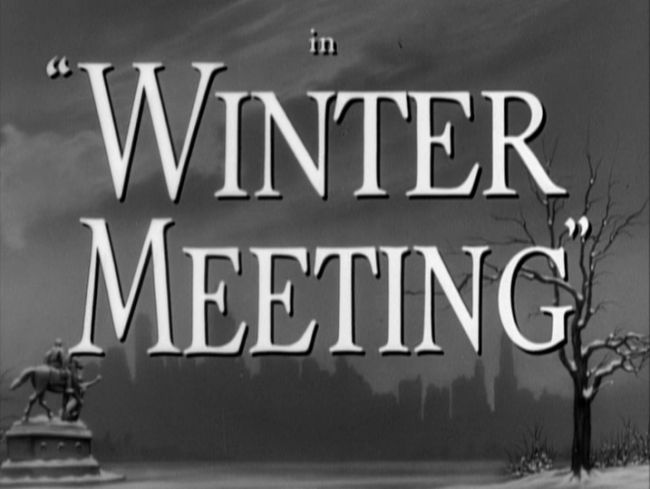 Not that Bette was all that old. During filming for Winter Meeting (1948), she was only 39, but her love interest, played by an actor just one year younger than Bette, actually looked a decade younger. Warner Bros. often paired her with men who were about her age but who appeared to be in their late 20s, thanks to the magic of Hollywood — Perc Westmore and other stylists could work miracles sometimes, but the makeup on Bette as her career waned was often a disaster.

Her best roles during this era were practical, sophisticated women, often successful in their careers, and Susan Grieve in Winter Meeting is one of those terrific women. A well known poet with old family money and a fabulous New York literary lifestyle, Susan tags along on a sort of double date with her bitchy gay friend Stacy Grant (a terrific John Hoyt), who is trying to entertain a decorated war hero by the improbable name of Slick Novak (Jim Davis). Stacy’s pretty party girl secretary Peggy Markham (Janis Paige) is brought along as the woman meant to entertain Novak, but he instead has eyes for Susan, a content Yankee spinster who doesn’t suffer fools gladly and has very little interest in dancing. “I have no emotions worth mentioning,” she tells Stacy. “Maybe I should have a cat.” 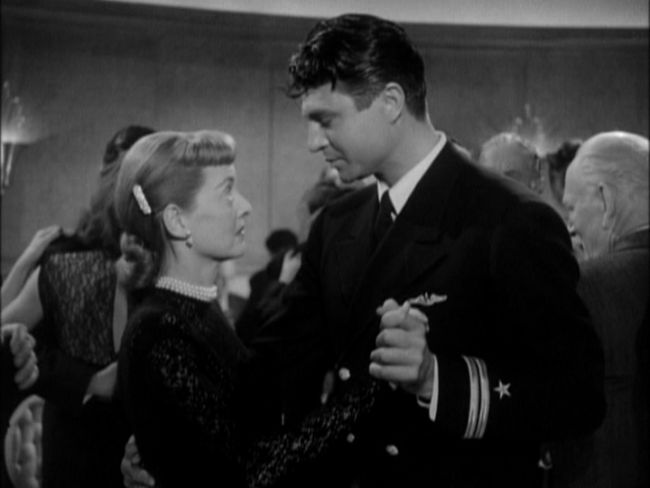 Both Novak and Susan are uncomfortable around people, outcasts — at least outcasts in the way Hollywood portrayed them in the 1940s — but find in each other a kindred spirit. Also, they are absolutely adorable together. The jealous look on Peggy’s face when Novak goes up to Susan’s apartment after their night out is worth the entire price of admission for this film, as is Stacy’s shrugging sophistication. If anything, Stacy probably wonders why Susan hasn’t had more men up to her room; it’s not the 1800s anymore, you know.

Bette is wonderful in Winter Meeting, exhibiting a terrific comedic timing and sharp, witty sarcasm she didn’t usually get a chance to indulge in. John Hoyt is also a delight, and there is frankly not enough of him in the film. As vengeful party girl Peggy, Janis Paige isn’t given all that much to do, but she makes the most of the role; it’s very much a small part made larger by a fine actress, and she reminds me a lot of Jean Hagen here. 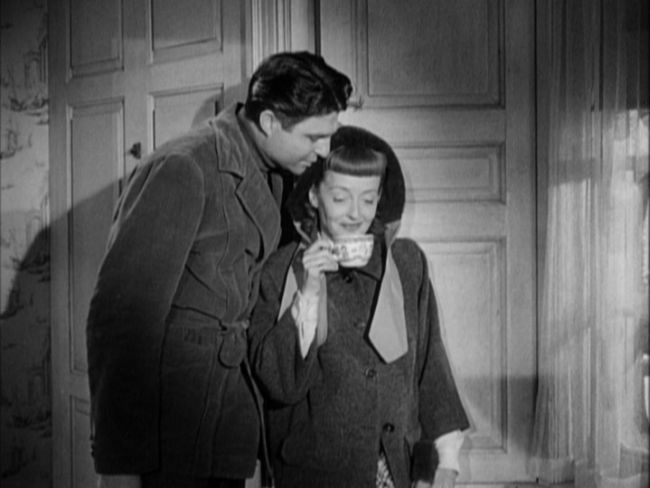 The film falters a bit with Jim Davis, who was never a good actor, though I think we all liked him as Jock Ewing on “Dallas,” and my good friend Ivan could probably list 150 TV Westerns Davis guested on. Here, though, the actor seems as lost as his character, walking sometimes as though he wasn’t really sure of his blocking, and defaulting to angry when he didn’t know how else to read a line. The plot also starts to get a little bizarre as Novak and Susan reveal their too-convenient Freudian baggage after they spend a holiday out at her family’s country home. It turns into a Joan Crawford vehicle [1], a melodrama of morality and sacrifice, and modern audiences will probably wish it would go back to the bitter New York scene as soon as possible. 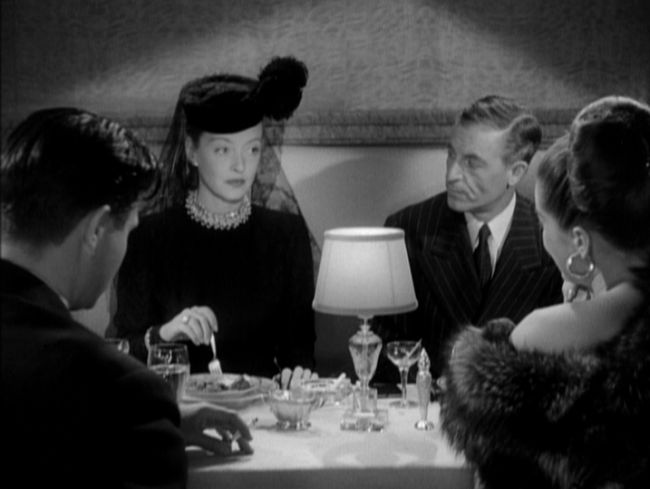 Stacy knows Susan is about ready to smack a bitch.

Still, this is a worthwhile film to seek out, if for no other reason than Bette and Jim are really cute together. I don’t see Winter Meeting much on TCM — the most recent viewer review on their page for the film is from 2010 — but it has been released from Warner Archives in a MOD DVD, in a really nice print with surprisingly good resolution. The film is a little shaky (what I always blame on sprockets, knowing full well I have no damn idea what causes the film to move like that) but those of us who watch a lot of classic films are used to that by now, I imagine. Winter Meeting is very much of its time, a different, interesting little film, and highly recommended.

[1] Those of you who know how difficult it was for me to not use the word “lesser” here: Thank you for still being my friend.