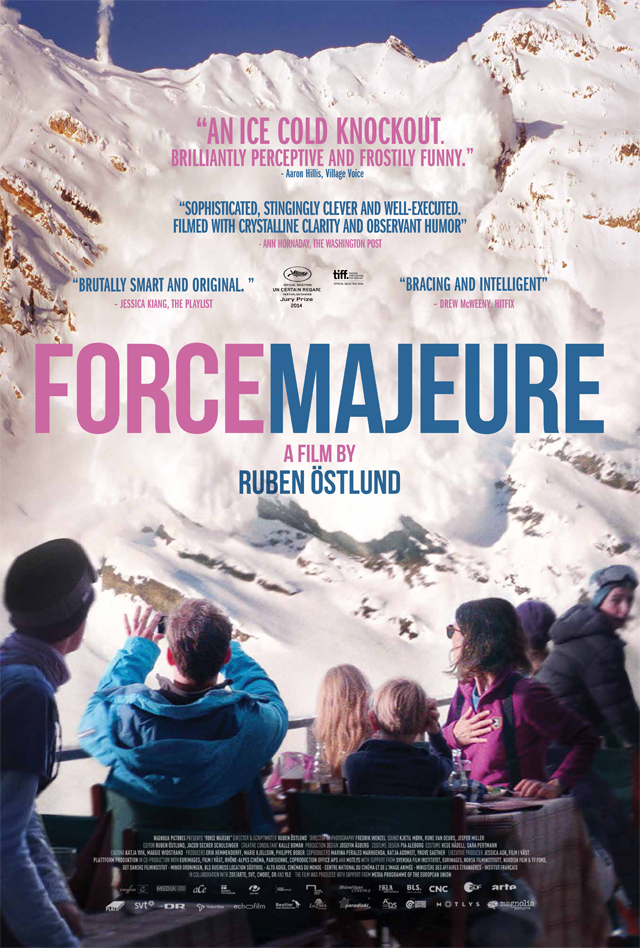 Ebba (Lisa Loven Kongsli) and Tomas (Johannes Kuhnke) and their two adorable children (real-life siblings Vincent and Clara Wettergren) are spending a week at the gorgeous Les Arcs resort in the French Alps. They are an attractive family with their expensive ski equipment, high-end watches and matching thermal underwear surely bought special for the trip. The usual familial tensions arise: mom is stressed and dad is glued to his iPhone, and when he isn’t, pushes his young son too hard to compete rather than have fun.

Force Majeure begins with this simple premise, framed in spectacular photography and effects that render the already-beautiful Les Arcs locale even more stunning. At night, plows and snowblowers growl along the hills, making perfect what nature and tourists have disturbed, while small, controlled explosions knock just enough snow down the mountains to prevent enough build-up to cause an avalanche. During lunch, one of those explosions unexpectedly goes off, startling everyone. Tomas won’t allow the family to leave, insisting the snow heading their way is harmless, but Ebba isn’t convinced; when the snow overtakes them, she dives to protect her two children, while Tomas grabs his keys and iPhone and runs away.

Moments later, it’s clear the avalanche was merely a snow cloud. No one is hurt, and a few chuckles and some dusting off later, everyone is back to normal. Everyone, that is, except Tomas and Ebba, whose already-stressed marriage begins to fracture. Equal parts drama, satire and outright humor, Force Majeure pokes and prods at this couple like a geologist picking away at newly discovered cracks in the mountainside, destabilizing an entire structure in the hopes of getting at the mysterious core.

Just as in any good satire, not a single character in the film acquits themselves admirably. Everyone is divided amongst strict binary gender lines — the blue and pink of the poster make that clear before the film even begins — and it’s this strict adherence to somewhat outdated tropes that gives the film much of its humor. Unfortunately, these themes are not applied consistently, which gives the impression that the film means to declare a winner in the gender wars.

Tomas, for instance, is as childish as his two young children. He’s a lovable loser archetype, so weak he can’t even admit to his own flaws, a ridiculous liar who expects women to believe him simply because he insists that his truth is the only truth that matters. But these flaws are mitigated by his big wide puppy dog eyes and sad, pleading demeanor, rendering him silly and sympathetic and, most notably, harmless.

The same cannot be said for Ebba, whose negative characteristics hit so many anti-women tropes that it can hardly be coincidental. She’s cold, selfish, duplicitous and hypocritical, and isn’t swayed by her husband’s self-pitying sobfest. Other women in the film fare no better, Fanny (Fanni Metelius) deliberately poking at her boyfriend’s insecurities, and two women at the resort insulting Tomas and his friend Mats (Kristofer Hivju) out of either cluelessness or maliciousness. And finally, a friend of Ebba’s is defined by a singular trait: she has sex with many different men. That’s it. The character was created to criticize the dull monogamy of the bourgeoisie, of course, but she is nonetheless a prop, existing in the film in the exact same way a bus or a glass of wine or a pair of skis do.

Much of the tension in Force Majeure derives from the threat of further disaster, and the film is happy to play with that tension, teasing the audience with the promise of danger. It’s fun and lightens the mood — at one point, you half expect someone to cause an avalanche with a yodel — but, like almost everything else in the film, this eventually descends into little more than another narrative trick meant to condemn Ebba. That the scenes of faux resolution in the finale exist in a more stylized world where metaphor prevails, while the rest of the film clings so tightly to a realistic, even naturalistic, narrative just hits the point harder: unreasonable men are funny, harmless and to be pitied, while unreasonable women are so dangerous they bend reality.

It’s not that Force Majeure is sexist; truth be told, there is hardly a film in existence that doesn’t fail in some major sociocultural way, and to dismiss a film based on those missteps alone is misguided. Director Ruben Östlund’s film does not exist in a cultural vacuum, either, calling upon the films of Sven Nykvist and Ingmar Bergman which, largely due to the eras in which they were made, suffer from some of the same issues. But the nuance and understanding given to the male half of Force Majeure’s gender war doesn’t mesh with the academic and distant way the female half is treated, and causes a strange contradiction in the film’s worldview. To have many of Tomas’ faults defined by their sexism and to comment so heavily on restrictive gender roles, while at the same time portraying the women in old-fashioned, sexist terms, causes a fatal dissonance within the narrative.

It’s not as though Force Majeure is the first film to actively indulge in the negative traits which it means to condemn, nor is it the first film with a contrived resolution. It is, however, one of the best films to be saddled with these insurmountable flaws, undermining what otherwise could have been a classic of the genre. With its gorgeous cinematography, fine performances, sharp wit and a writer-director with terrific control of his craft, Force Majeure is an impressive feat, and a pleasure to watch despite its limitations.