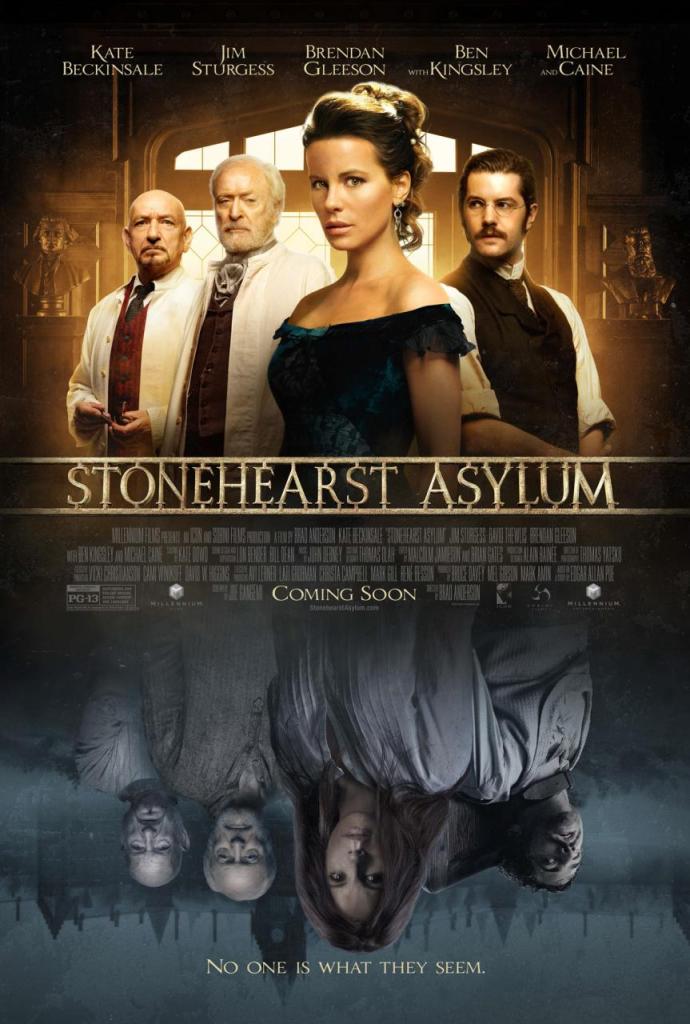 In Edgar Allan Poe’s wry short story “The System of Dr. Tarr and Prof. Fether,” a young doctor takes the opportunity to visit a renowned mental asylum and view for himself the successes of the so-called “soothing system” treatment. Invited to stay for dinner, it becomes delightfully clear to the reader that the locals and staff are quite insane, but the narrator, pleasant but dim, fails to realize it himself. Finally, the actual staff comes bursting into the building, and even then, many of the more obvious details fails to register with our narrator.

Stonehearst Asylum, director Brad Anderson’s latest, is based on this charmingly macabre story, but replaces the somewhat clueless doctor of the original with the wide-eyed and eager young graduate Edward Newgate (Jim Sturgess). Further, the film obscures the bizarre behavior of the staff to such an extent that the reveal that they are not staff but inmates is understandably a shock to the newly arrived intern. Still, the reveal comes early enough, and with enough ambiguity, that the question of who is telling the truth and, more importantly, who is truly sane in this whole mess, remains for much of the film.

The charismatic and professional Silas Lamb (Ben Kingsley) greets the doctor when he arrives, and takes him on a tour of the facilities. There, Newgate sees the beautiful Eliza Graves (Kate Beckinsale), committed by her husband after her ferocious attack in response to his unwanted attentions. Newgate is immediately taken with her, but so is Silas Lamb, and he endeavors to keep the two apart; of course, he also wishes Newgate to be kept ignorant of the fact that he is not actually the director of the asylum, without realizing Newgate already knows.

It’s this cat-and-mouse does-he-or-doesn’t-he game that bogs Stonehearst Asylum down to a fatal degree. It is simply incomprehensible, with all the secret discussions had right out in the open, all the mentally ill patients unable to keep secrets and, most of all, all the reminders of the real staff left laying about the home — a large portrait of Dr. Salt (Michael Caine) is seen twice — that Silas Lamb’s scheme could have been kept hidden for any length of time. And as the film goes on, the characters begin to act in ways that make no sense, the script depending far too heavily on the audience forgetting that Lamb still does not realize that Newgate knows his secret.

That chronic lack of attention runs throughout the entire film, explanations avoided as though no one involved realized anything needed to be explained at all. The patients are all from the finest homes, relatives of landed gentry and noblemen, though many of them spend the film doing menial tasks and working below stairs, and without comment. Many of the inmates were not insane at all, but merely locked away for convenience or as a product of the psychological and medical ignorance of the late 19th century, yet inexplicably stayed behind at the asylum after the staff was overthrown.

The same lack of attention can not be said for the film’s gorgeous visuals. Much care was taken in presenting a sufficiently creepy Gothic setting with the requisite ornate woodwork, beautiful rugs, tremendous fashions and bizarre medical devices. The overall demeanor of the film, however, is subdued, its desire to be a serious drama leaving almost all of the humor of the original story drained out, only a few bits of accidental humor left behind. Most of this accidental humor derives from the script, a hodgepodge of original Poe, lackluster romance tropes and outright cliché; Stonehearst Asylum is the kind of film where someone quite literally says, “The lunatics are running this asylum.”

The very concept of lunatics running their own asylum evokes excess in some form, melodrama at least, if not full camp, and camp is what Poe’s highly emotional works often translate to, at least in our modern eyes. The Universal Pictures films of the 1930s based on Poe, often starring Bela Lugosi, and Roger Corman’s Poe films of the 1960s, were some of the best adaptations of the author’s work, made in cinematic eras that were known for heightened and expressionist emotion, bold set design and outrageous plots.

Stonehearst Asylum, sadly, is a watered-down version of those old Universal and Corman flicks. Ben Kingsley brings some much-needed grandeur to the proceedings, but no one else, especially not Michael Caine, can manage it; Caine spent the 1960s being cool, not campy, and the kind of melodrama inherent in a hysterical Victorian tale of lunacy and revenge simply eludes him. But there are no psychosexual whirlwinds or undercurrents of incest and perversity here, merely a sweet but dull love story of the damsel-in-distress variety. There is the inevitable fire of the kind that plagued Vincent Price in all those 1960s Poe adaptations, but the fires of Stonehearst Asylum are tepid, neither dangerous nor damaging, barely producing light.