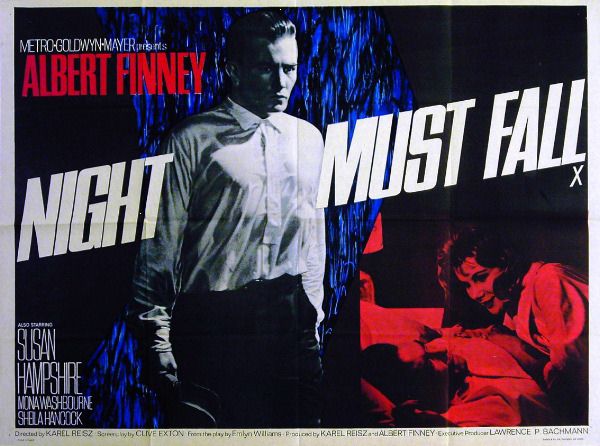 Dora (Sheila Hancock), maid to the semi-invalid Mrs. Bramson (Mona Washbourne), finds herself pregnant and with a boyfriend reluctant to marry her in the 1964 British psychological horror film Night Must Fall. At the nosy Mrs. Bramson’s insistence, Dora invites her boyfriend Danny (Albert Finney) over, and his boyish ways immediately wins the affections of the tetchy old widow. Less impressed is her daughter Olivia (Susan Hampshire), staying with her mother indefinitely, using her mother’s illness as an excuse to take a break from an unhappy marriage. But soon even Olivia is charmed by Danny’s antics, and there’s the little matter of the heavy police presence just beyond their gates, as hundreds of men look for the body of a missing local woman. 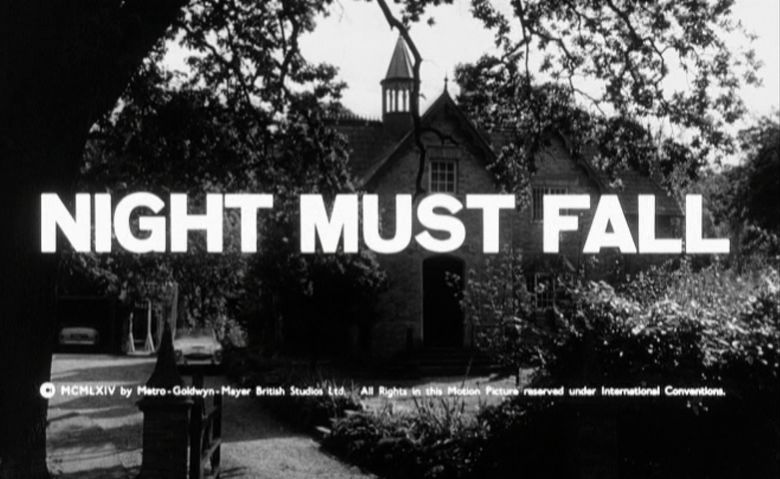 Though it should rightly be an ensemble cast film, the movie, made to followup on Finney’s post-Tom Jones fame, is all Finney’s film. He is undeniably the center of this movie, and he gives an incredible performance. It’s perhaps a little too incredible, an intense turn that needs a little breaking up now and then, though with this stage play turned movie, there’s really nowhere else for the movie to go. Everyone in the film gives a fine performance, though special notice should be given Susan Hampshire, who takes what could have been a dull character and makes her complicated and frustrating. 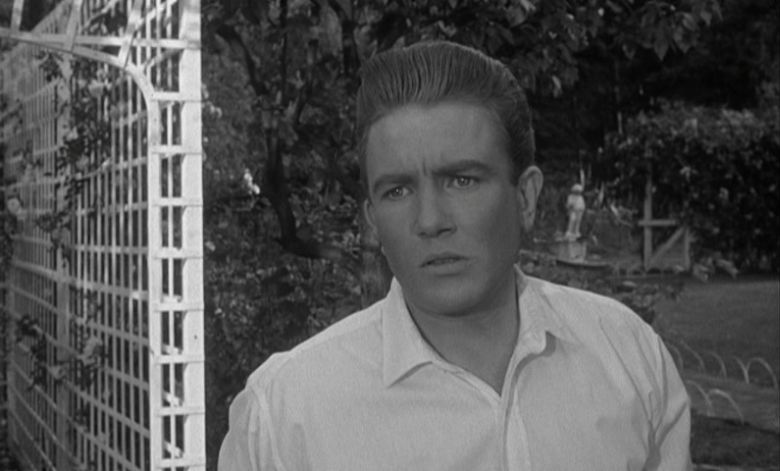 With heavy makeup — emphasis on rouge to give him that boyish glow — Danny’s face looks almost like a mask, albeit a porcelain mask, one that should shatter quite easily, if someone would just take the time to try. His hair is in a hip, longer rockabilly style, very close to a London leatherboy look, but just a little off: there’s no part and not a single hair is out of place. The same wannabe-rebel image can be seen in his Vespa, a sporty little number he rides as though he were in Rebel Without a Cause or The Wild One, instead of Roman Holiday.

This almost-bad-boy image works well enough on his victims, all lonely women who don’t spend much time in city. They must also not spend much time watching classic horror films, because if they did, maybe they’d realize square hair is never a good sign: 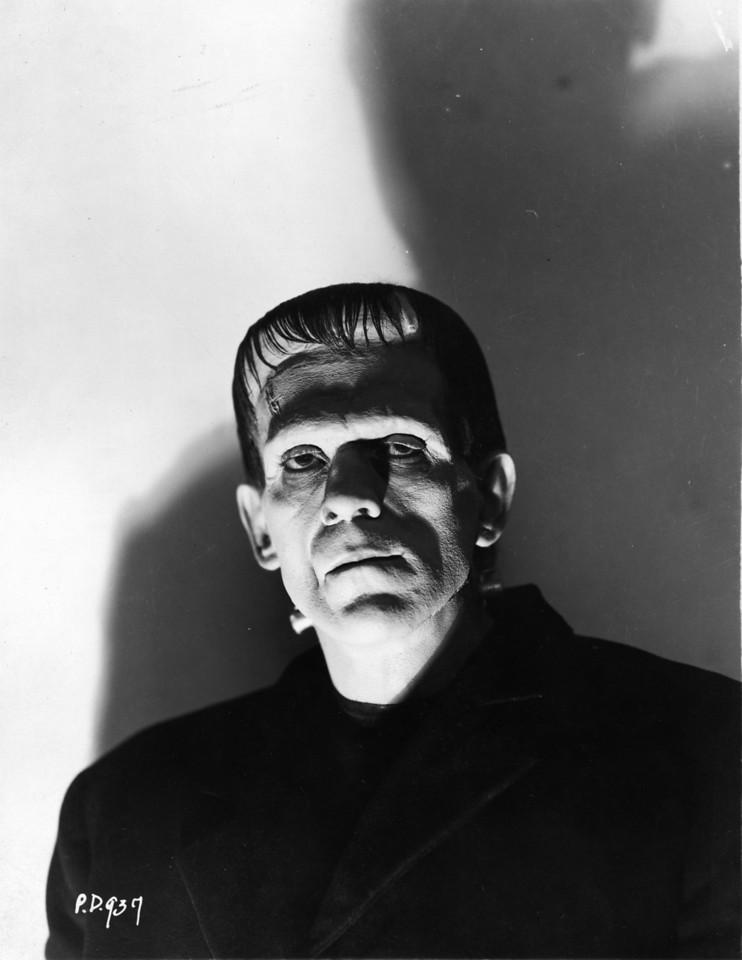 I make fun of this visual signifier a bit, but in truth, it’s a powerful and straightforward indicator that the Dannys of the world don’t just happen, they’re man-made.

Danny’s unwavering focus on the host of women he finds himself surrounded by threatens to turn Night Must Fall into one big Women In Peril trope, but there’s a twist to the narrative one doesn’t usually see in films from the 1960s: that victimizing women is a choice men like Danny make because women were so limited in their options. Danny is manipulating the inherent sexism of 1960s Britain for his own sick goals, and the film blames that intrenched sexism as much as it blames Danny.

That said, the film makes much proverbial hay out of the stereotype that women will fall all over themselves the second a man who can perform sexually arrives in their lives. The scenario gets more complicated as the film continues, however, and ultimately it works as a critique of the burgeoning post-Pill sexual revolution. At the early date of 1964, the film can be excused for not quite getting it right, but it’s distasteful to a degree and shifts the blame to the victims in a way muddies what otherwise is a compelling bit of cultural critique. 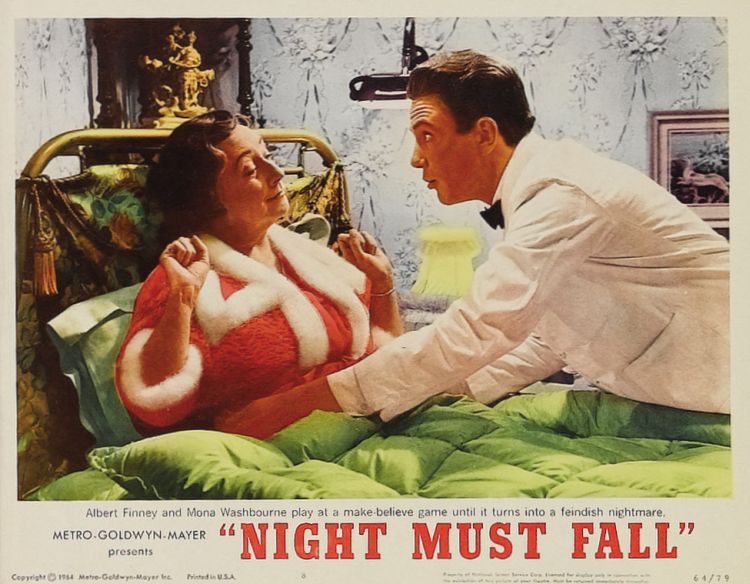 Night Must Fall is a worthy companion to other psychological horror flicks of the early 1960s. Unlike The Haunting or Psycho, however, we’re shown in the very first scenes that Danny is a murderer, and that lessens the overall suspense, but heightens the tension as we wonder just how taken Danny is with the women who are all taken with him. And in comparison to the 1937 version starring Robert Montgomery, there are enough differences and changes to the plot that having seen the more famous version won’t hinder your enjoyment of this lesser-known film.

Night Must Fall is available from Warner Archive on a MOD DVD from a very good print. The image quality on this is as good as any mass manufactured DVD of a comparable movie from the same era. There are no extras except the trailer, and no subtitles.