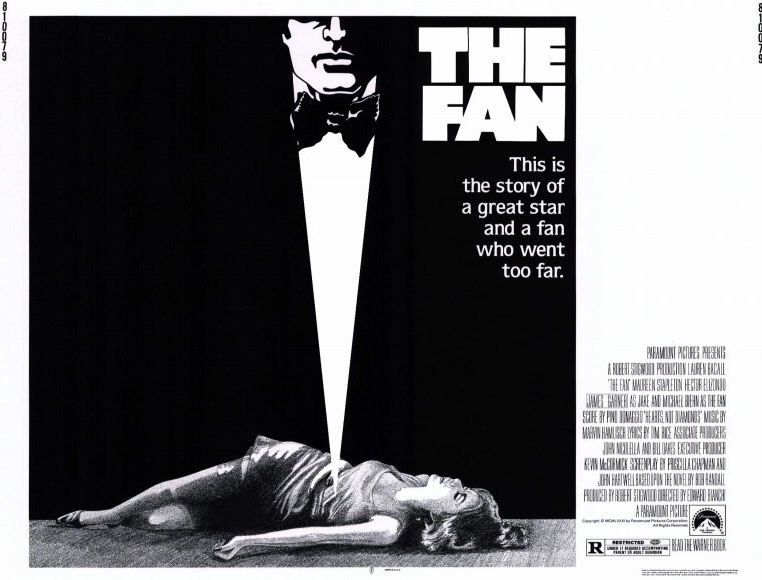 Poster for The Fan (1981).
Be ye warned, gentle readers: there are spoilers ahead!

“What is this ‘bliss’ shit?” shouts Belle Goldman, beleaguered assistant to Broadway star Sally Ross. A series of disturbing letters have been arriving for the aging star, but Belle can’t get Sally to understand how concerning they are. Sally, always dependent on the kindness of her fan club members, thinks Belle is too mean, and lectures her about her allegedly poor attitude, accusing Belle of always wanting a life full of “bliss.” Unfortunately for them all, overzealous fan Douglas Breen also believes that Belle is mean to him, and his behavior escalates. 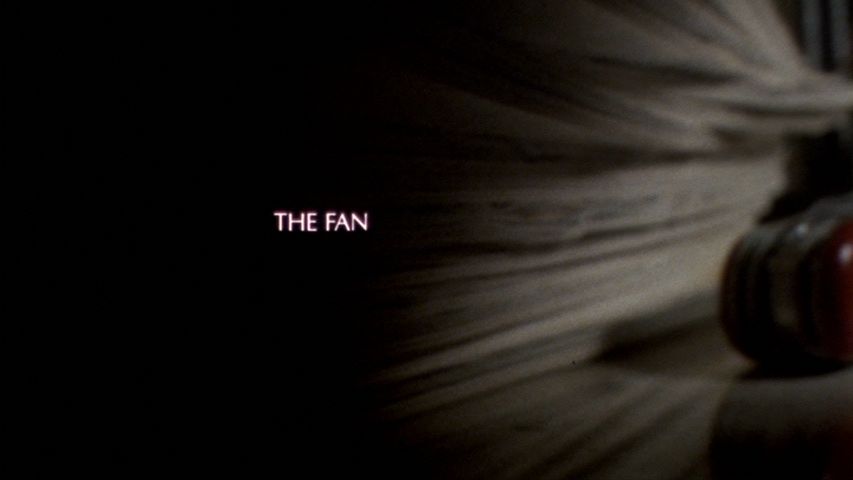 Michael Biehn plays Douglas, the titular fan in the 1981 drama-horror film The Fan. Douglas becomes increasingly hostile in his fan mail, while Belle (Maureen Stapleton) works behind the scenes to try to chase him off. As Sally (Lauren Bacall) rehearses for a new musical and navigates a complicated life with her film director ex-husband (James Garner), she’s unaware that Douglas is never that far from her, no matter where she goes. Soon he begins violently attacking those closest to her, and she realizes he is no ordinary overinvested fan, but someone actively trying to kill her. Rounding out the cast are Hector Elizondo and Anna Maria Horsford, both great in supporting roles as police officers. Also watch for Dwight Schultz and Griffin Dunne in small roles. 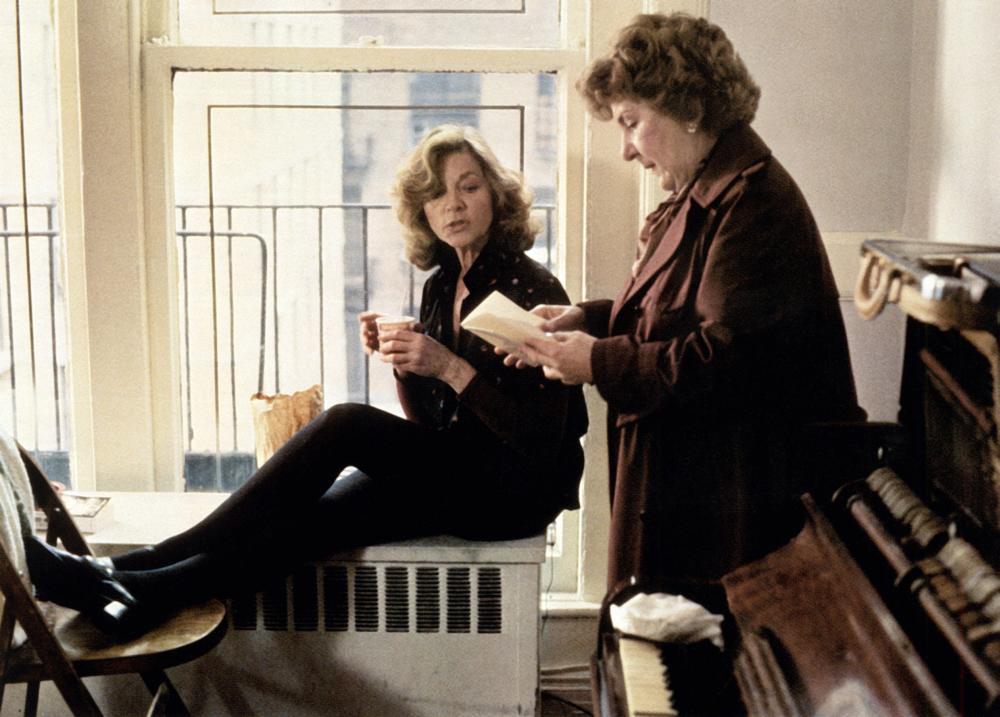 The line between fiction and reality was purposely blurred in The Fan, interesting for a time when such methods weren’t as fashionable as they are today (or, more specifically, weren’t as fashionable in the Hollywood studio era). The meshing of reality and fiction is noted in the very first frames, as Sally Ross’ memorabilia in the opening credits is unabashedly Lauren Bacall’s own memorabilia, up to and including a photo she signed in the 1940s with, “Here’s looking at you, boys!”

Lauren Bacall also very famously lived in The Dakota, and the film, released only seven months after John Lennon’s assassination in front of the building, has the appearance of capitalizing on his murder. However, the original plans for the film date back to 1978, when the rights for Bob Randall’s book were first optioned and Newsweek reported Ralf Bode would direct. A year later, an issue of Film Bulletin, released months before Lennon was killed, lists The Fan as already filming, now with Ed Bianchi directing. Despite The Fan obviously having only an accidental connection with Lennon, the press, basing much of their opinion on the ending in the original novel, was relentless in slamming the film for profiting on tragedy, as they saw it, and that righteous indignation certainly got the ball rolling on a wholesale panning of the film. 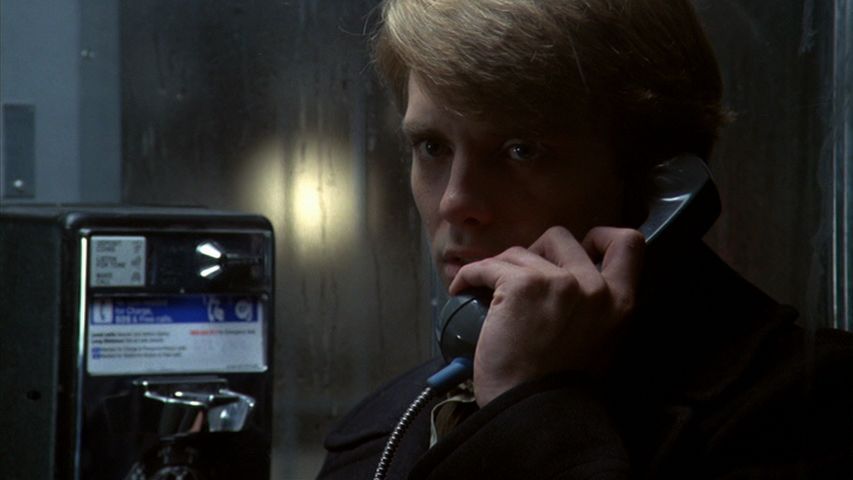 Casting James Garner as the ex-husband Sally still had feelings for didn’t do the film any favors in the PR department, either. Garner, in the midst of a lengthy separation from his wife of many years, was rumored to be having an affair with Bacall during filming. For almost any other actors, a rumor like this would have lead to the kind of publicity that generated interest in their films, but it simply didn’t mesh with Garner’s and Bacall’s reputations. She was known for being strong, determined, difficult, brash and stubborn, while he was long known as a laid-back, beloved family man. Also, with Bacall and Garner working together on two films as well as a two-part “Rockford Files” special during this time, tabloids worked the angle that they were trying to position themselves as a Hollywood power couple; his tiny role in The Fan looked like stunt casting, and only bolstered that theory.

The whole thing was a mess, so much so that when Garner and Bacall died earlier this year, over three decades after filming The Fan, discussions inevitably turned toward the affair — one which, it should be noted, Garner denied repeatedly. Bacall is not mentioned in the 2012 biography The Garner Files, but neither is The Fan, though she Bacall contribute a really sweet blurb for Garner’s book where she calls him “attractive,” “appealing” and “adorable,” among other things. She’s not wrong.

Critics at the time praised The Fan for Bacall’s and Biehn’s performances, though many considered the film to be mediocre at best. It is certainly a strange and often effective mix of Old Hollywood and newer, B-movie horror. There are times when Biehn is reminiscent of Norman Bates, other times when he anticipates the performance of Michael Ironside in Visiting Hours (1982). There is some fantastic lighting and framing intermixed with realistic moments of theater life, plus shots of a New York City that has long disappeared. But there are also laughable moments of musical theater (a tepid mishmash of All That Jazz numbers) and a heavy-handed ending that you would swear was a joke. It was director Ed Bianchi’s first solo outing, and he wouldn’t direct again for a decade. Television was always Bianchi’s milieu, and he has gone on to direct some stellar episodes of noted shows such as “Deadwood,” “The Wire” and “Boardwalk Empire.” Still, it’s this sort of washed-out made-for-TV glow that really detracts from The Fan, and which keeps people from sticking with it, but those who do will find something worthwhile. 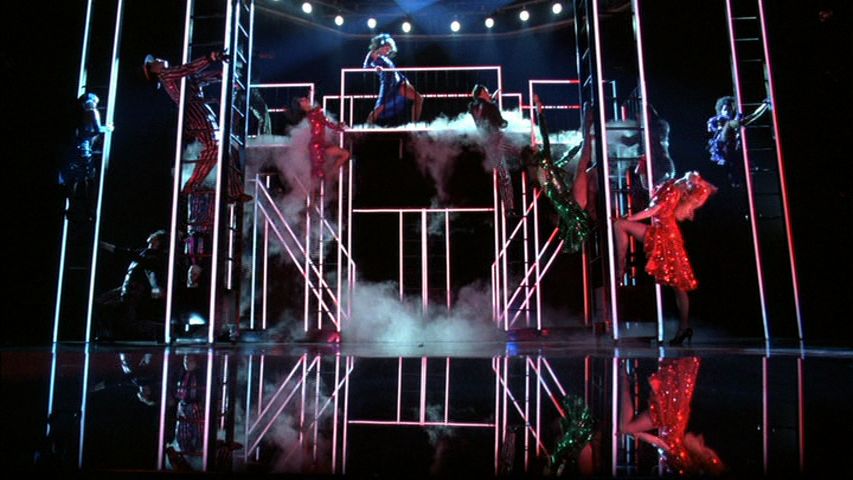 Included in Vito Russo’s The Celluloid Closet for a scene where a gay man is murdered, The Fan is less homophobic than its reputation. The murder is distasteful, no question, and it’s the portrayal of the gay dating and hookup crowd as being easy pickin’s for a psychopath looking for a male corpse that Celluloid Closet objects to, as well as the method of death, and they have a point in that regard. On the other hand, there’s no leering at the patrons of the gay bar or even judgment of the victim (portrayed by Terence Marinan, who sadly passed away last year). In fact, Douglas is not shown as disgusted or having to really work himself up to engage in a sex act with the victim, there is nothing about the gay bar that looks tacky or cliched, and none of the gay characters — including more than one dancer and choreographer — is seen as anything but just another character. The film seemed to make a concerted effort to just present these characters and events in the exact same way they would have had the characters been hetero.

Had this been a case of one gay character included only for a murder, or had there been any negative portrayals of a gay man, that would have been concerning. But this is a film made in the era of Freebie and the Bean and Cruising, and I — who am not a gay man and therefore cannot speak for gay men, and can only approach this particular work in a cultural context — am willing to give The Fan a lot of credit for being advanced for its time. 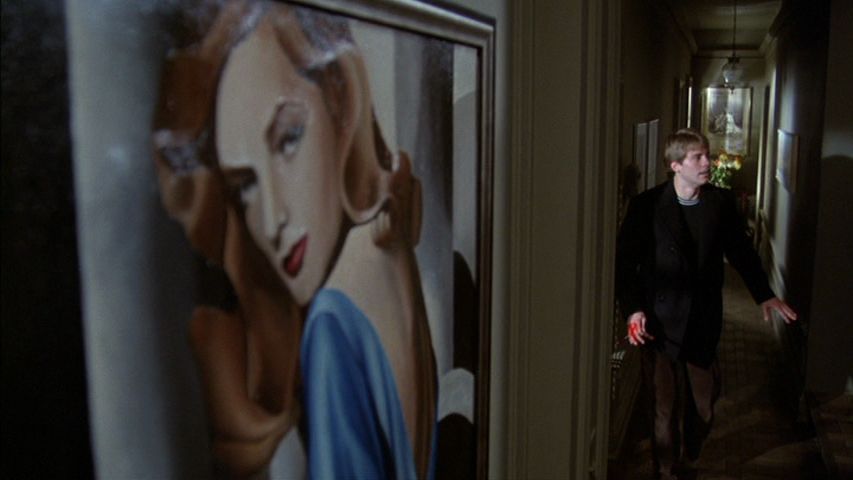 A gorgeous art deco portrait of Bacall, in the style of Tamara de Lempicka or Thomas Hart Benton, graces her fabulously appointed apartment.

That said, there is some troubling imagery regarding Douglas and what some critics have claimed is his implied impotence, up to and including his hesitation when threatening Sally with a knife in the finale, seen as his inability to consummate the rape fantasy he has been harboring for months. Still, we see him use his knife on both men and women, his attacks on people of both genders always metaphorically sexual. His hostility toward a co-worker (a young Dana Delaney) is in part due to what seems to be an attraction to her, and frustration over the fact that she’s a real human woman with all that pesky free will and stuff, which gives him a big ol’ case of the Man Angries.

Peter Shelley in Grande Dame Guignol Cinema makes a reasonable case when he claims Douglas is a closeted gay man, and his treatment of The Fan is an interesting read, though in several instances he makes mistakes of fact, which calls into question his reading of some scenes. For instance, he doesn’t notice the scar makeup on a victim who has been released from the hospital, thus later draws no parallel between that victim and someone in the finale who is also slashed in the face. 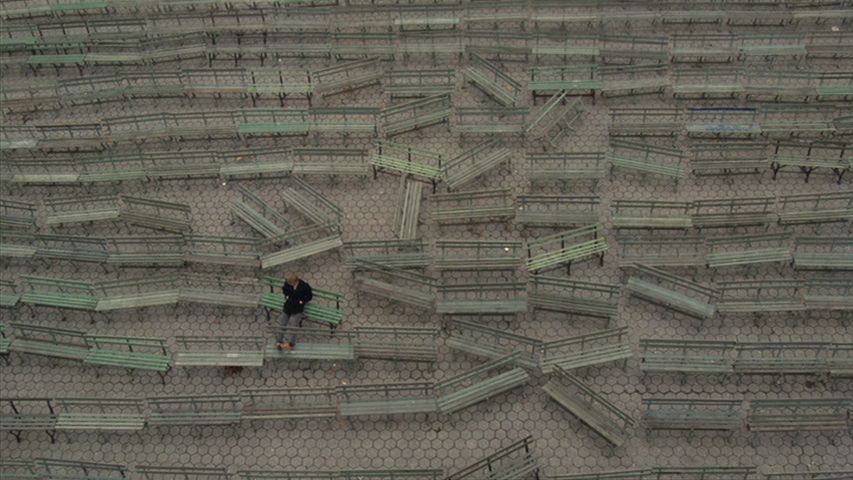 His reading of Douglas as gay seems questionable, too, given the full context of the film. The character seems more likely to be impotent (symbolically or in reality) because he wants to control women, and when they cannot be controlled, he loses his symbolic masculinity. The issue of control over women is seen, in literature and reality and sociocultural studies, as a primarily male trait, regardless of the male’s sexual orientation. The rape fantasy he indulges in is all about control and very little about sexual attraction, and his wrath is equally distributed amongst both men and women, so it seems almost useless to use his psychological issues to identify his sexual orientation.

The contents of the letters Douglas sends to Sally are just fucking terrifying, by the way, and the rather laissez-faire attitudes of characters towards them will remind those of us of a certain age that there was a time when gruesome rape threats weren’t all that outre. Some of these threats, though, will make even the strongest among us, those who read all the comments on the internet, raise their eyebrows. Even more terrifying is the heavy implication that multiple women in the film, if they had just behaved themselves, could have stopped Douglas’ murderous rampage. But the film lacks narrative control at times, and there is a contradictory implication in The Fan that women in general are held to a performative standard — every woman’s appearance is to be judged, every woman must behave in a certain way — and daring to disregard sexist social expectations can become fatal, through no fault of their own. 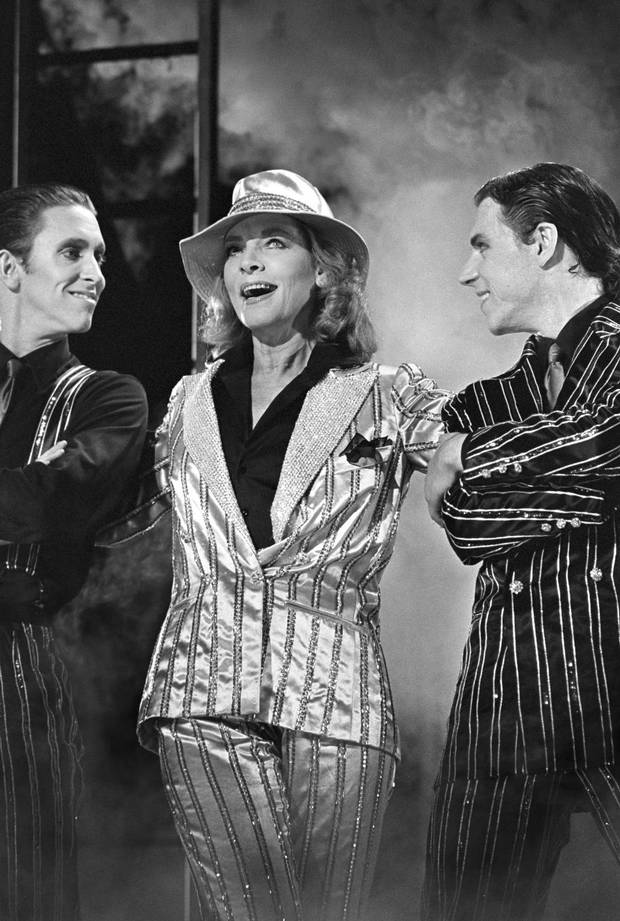 On the surface, The Fan is a somewhat boring almost-horror flick, the kind of thing that would take very little editing to make it acceptable for NBC’s Monday Night at the Movies. You don’t have to dig far to find a whole hell of a lot of interesting themes burbling under the surface, though, notions of gender roles and sexuality and celebrity and aging all there for examination. It’s not deep and certainly not complicated, but it’s unquestionably interesting.

Warner Archive has released The Fan on DVD, with initial printings done traditionally and not MOD. These discs use the same print and features as the now out-of-print DVD had. It’s a really nice-looking film, too — so many films from about 1979 through 1981 look like bags of grain with some watercolor sketches on them, but The Fan is clear with normal grain and a really lovely saturation of color that helps heighten the horror mood. As of today (December 14, 2014), the DVD is on sale for $13.89.