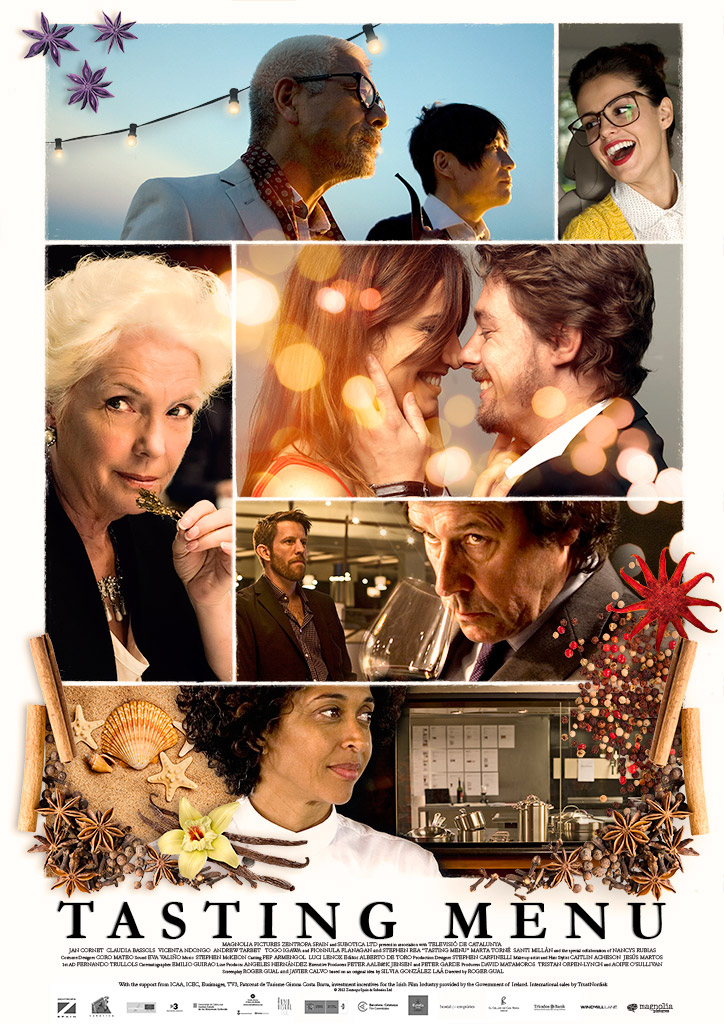 Chakuta, the world-famous restaurant located on the beaches of Spain, is closing its doors after 15 years. Owner and celebrity chef Mar Vidal (Vicenta N’Dongo) has invited 30 guests for the final dinner, and though one would assume these would be no ordinary guests, they are, in fact, the most typical guests in the world. A tidy group of the very vanilla populate Tasting Menu, and as the evening approaches, widows sit in their living rooms, professionals leave uncomfortable voice mails and businessmen are picked up at the airport, The Divine Comedy’s “I Like” cheerfully underlining the banality of it all.

The guests are so boring, in fact, that once the dinner begins, Chakuta’s employees unconsciously manufacture drama just to liven things up. There’s a waiter who can’t seem to get messages and gifts to the proper tables, and manager Max (Andrew Tarbet) not only suspects conspiracy and sabotage at every turn, but deliberately seats competitive businessmen at the same table with each other.

Estranged couple Rachel (Claudia Bassols) and Marc (Jan Cornet) lead the ensemble, Rachel’s petty complaints setting the tone of conversation for the night. It seems her husband Marc spends too much time being a successful pediatrician, and saving the lives of children was really cutting into her fabulous best-selling author lifestyle. After their split, Rachel took up with her editor Daniel, played by a truly awful Timothy Gibbs. Not only is his Daniel a ridiculous caricature, he somehow manages to have a genuinely terrible American accent despite being a native Californian. Daniel manages to finagle a way into the dinner — for an exclusive restaurant, Chakuta is surprisingly easy to crash — and attempts to prevent Marc and Rachel from reconciling.

Also floating about the evening are a chatty assistant, a mysterious Irishman and Japanese businessmen stranded without a translator, none of whom have any real substance. The banality of their bourgeois concerns contrasts against Mar’s art, the camera lingering on a host of inexplicable and beautiful dishes. Just as the art of gastronomy is necessarily fleeting, so is her place in elevated society, her interactions with the guests strictly limited by both class and time. Her close relationship with the widowed Countess D’Arcy (Fionnula Flanagan), rather than bridging the distance between working class and upper class, emphasizes it.

When the most insufferable of dinner guests confesses in a moment of wine-induced self awareness that she didn’t learn a thing from her months spent in a developing country, it’s no surprise that her revelation is met with a weak platitude, nor is it a surprise that this platitude resonates more strongly with her than her own life experiences. The night has finally become interesting; truths are told and uneasy relationships have formed amongst the guests, and a touch of sincerity begins to enter into their conversation.

It’s at this point that Tasting Menu dissolves into a frustrating, self-absorbed mess, as though the film was afraid of its own humanity. What had been a slight but pleasant diversion dissipates under the weight of stale, class-based stereotypes, the final act a tangle of unearned resolutions and forgotten plot lines. The film inexplicably but deliberately drains itself of any charm or feeling for its finale, leaving behind only the stale scent of wasted good will.