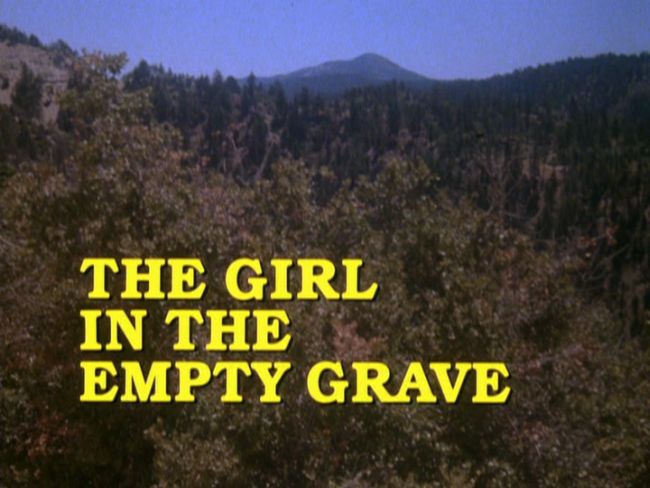 Are you a fan of crazy weird 1970s made-for-TV movies? Then have I got a doozy for you: The Girl in the Empty Grave.

What you need to know about this film before you even think about watching it is that Empty Grave was intended as a pilot for a new series starring Andy Griffith, a series possibly meant to be titled “Abel,” after Griffith’s character. The series didn’t take off, but here’s the thing: it didn’t take off all the other times it had been attempted over the previous few years, either.

This all began in 1974, when Griffith appeared as Sam McNeill, sheriff of a rural lakeside town in a made-for-TV movie Winter Kill. Airing exactly forty years ago on April 15, 1974, Winter Kill was packed to the gills with TV movie stalwarts like Joyce Van Patten, Sheree North, John Calvin, Lawrence Pressman, and even a young Nick Nolte. Intended as a pilot, Winter Kill did well enough in its ABC Movie of the Week slot — no surprise, considering it was written by John Michael Hayes — but ABC declined to turn it into a series. 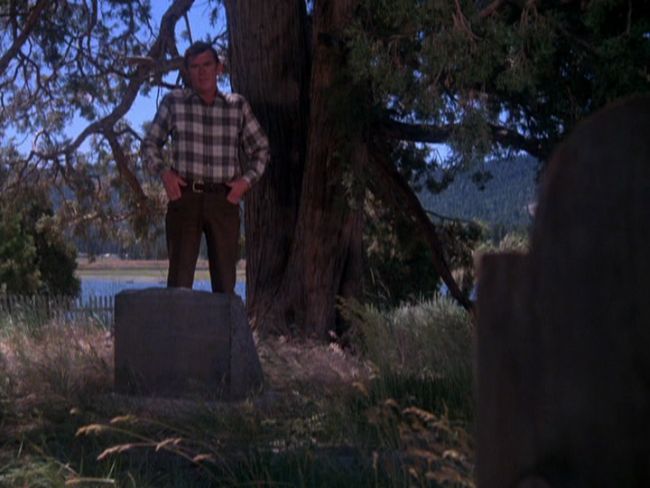 But Winter Kill had been based on producer-writer Lane Slate’s They Only Kill Their Masters (1972), released theatrically by MGM and starring James Garner as small-town sheriff Abel Marsh. Slate picked up the idea and tried again, not before changing the main character’s name once more — this time to Sam Adams — and removing some of the seedier aspects found in the Garner flick, including the homophobia and bestiality jokes. This time, the show sold, and ABC premiered the series “Adams of Eagle Lake” on August 23, 1975. Writer John Michael Hayes and actor Nick Nolte returned for the reboot, as did the same basic plot, quite a bit of the crew, and Andy Griffith, of course. The show only lasted two episodes before disappearing from the small screen.

Though ABC was done with the idea, Slate and Griffith trudged on, and in 1977, NBC was happy to give the same small-town sheriff another chance with The Girl in the Empty Grave. This time playing Police Chief Able Marsh — the same name used in the Garner film — Griffith is, for reasons unknown, about as cranky and unpleasant as possible. Every actor seems uncomfortable, truth be told, as they are clearly attempting to convey the idea that this is an already-established series, with the attendant cast camaraderie and audience familiarity. It’s bizarre, especially since the characters in this version of the Abel Marsh series don’t match up with any of the other Abel Marsh/Sam McNeill/Sam Adams films.

The forced familiarity starts to feel like gaslighting pretty quickly; when Griffith arrives, for example, no one says his name, he’s not in uniform, and it’s unclear who he even is, though the film certainly expects us to know. Perhaps the characters are meant to mimic our old friends in Mayberry, such as the Otis Campbell-Barney Fife hybrid played by Bill McLean, who not coincidentally appeared in guest spots on The Andy Griffith Show, Mayberry R.F.D. and The New Andy Griffith Show. 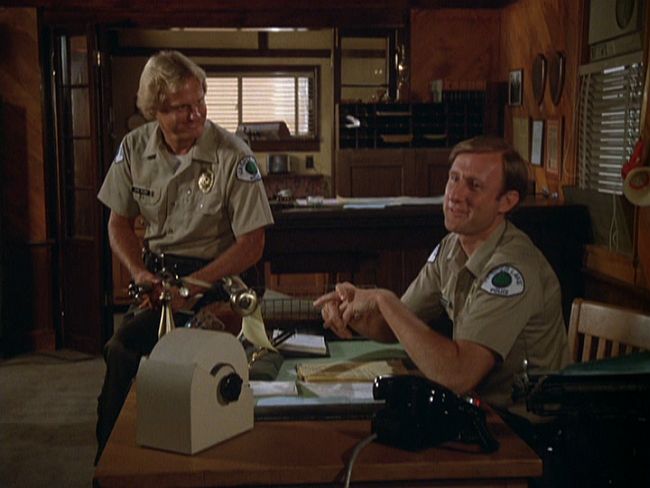 Hunter von Leer and James Cromwell as deputies. Von Leer was the bigger star at the time, but Cromwell was better at twisting his fingers into pretzels.

The opening credits of The Girl in the Empty Grave scroll over footage of someone in a sporty little number — it looks like a 1976 Chevy Camaro repainted Horizon Blue, but don’t quote me on that — speeding through the mountains until inevitably careening off a cliff. If the music during this sequence seems better than the usual television fare, that’s because it’s courtesy the legendary Mundell Lowe. How he got mixed up in this thing is beyond me, but I can only hope he received a nice paycheck for it.

We then segue into what looks like an old fishing shack but is, apparently, the town’s police office. For an interminable 15 minutes, 1970s TV staple Claude Earl Jones as Deputy Fred mumbles and kvetches his way through dialogue that makes little sense, but is apparently about some bureaucratic red tape and cheap assholes in the supplies department. If you’re watching the movie right now, you are wondering what that word Claude Earl keeps saying is, and I will tell you: “Dust broom.” Yes, folks, it’s that kind of movie.

Deputy Fred finally gets the plot going: Elizabeth, that crazy speedfreak chick who killed herself after accidentally driving off a cliff last year, has been seen in town, very much alive. He’s seen her, and soon Abel sees her, too, in a sporty Monte Carlo, suggesting that Chevrolet was one of the show’s sponsors. Anyway, the bigger takeaway here is that no one ever considers the girl in the Monte Carlo is a lookalike. Without hesitation, they decide that the dead girl isn’t really dead, thus Abel immediately goes out to her parents’ home to question them. He also questions retired politician Jedidiah Partridge (Robert F. Simon), who for whatever reason digs  graves in the town cemetery on occasion, even though we later hear the cemetery caretaker complain about having to find someone to dig a grave. The screenplay has lost the plot, that’s all you need to know; there’s no reason for you to try to find it again. 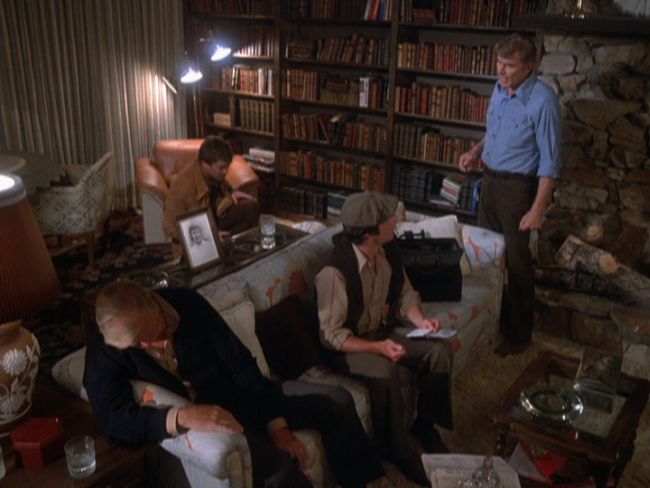 Pictured: One dead body no one seems to care much about, Jonathan Banks, Edward “Colonel Flagg” Hunter, and Andy Griffith.

When Elizabeth’s parents end up dead in their home, Abel steps up his heretofore iffy investigating skills to find the culprit. It’s at this point that sanity ceases to exist in this film, which means plenty of accidental hilarity that you’ll want to watch for: the strange, disjointed, allegedly sexual banter between character actors Leonard Stone and Mary-Robin Redd, for instance. Or the bizarre conversation Abel has with a lawyer where Griffith seems to not quite understand the dialogue as it’s written. Look for Griffith requiring extra makeup on his nose to cover tell-tale redness, accompanied by his inability to walk a straight line. There are also a host of fun actors in this telefilm, including Jonathan Banks in a tiny role that he gets top billing for, thanks to alphabetizing. 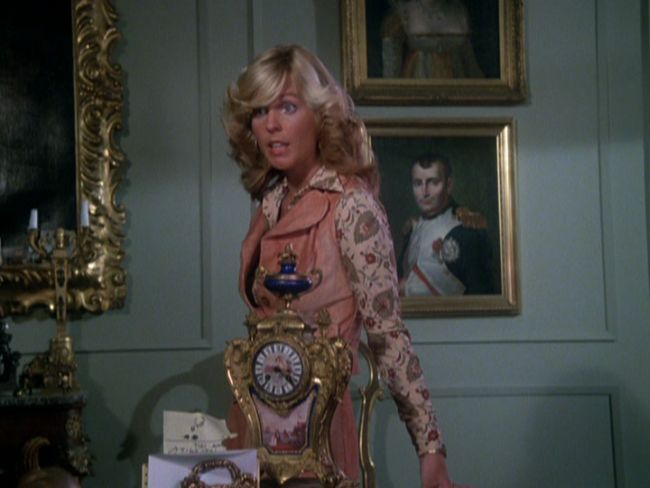 This actress in a bit part is, best I can tell, Kathleen Clarke. She has no other credits, yet looks very familiar. Does anyone recognize her?

After solving the crime and grinning ear to ear over a mangled corpse in a car (not joking), Abel Marsh returns one last time a few months later in the better-received Deadly Game, with many of the same actors and crew. With no series forthcoming, however, Griffith moved on to different projects in his search for one more major television success. After regular guest spots on “Centennial” and “Salvage 1,” as well as a bizarre but great turn in the Macbeth-ish Murder in Coweta County (1983), Griffith finally hit pay dirt with “Matlock” in 1986.

The Girl in the Empty Grave is available on Warner Archive instant as well as MOD DVD.