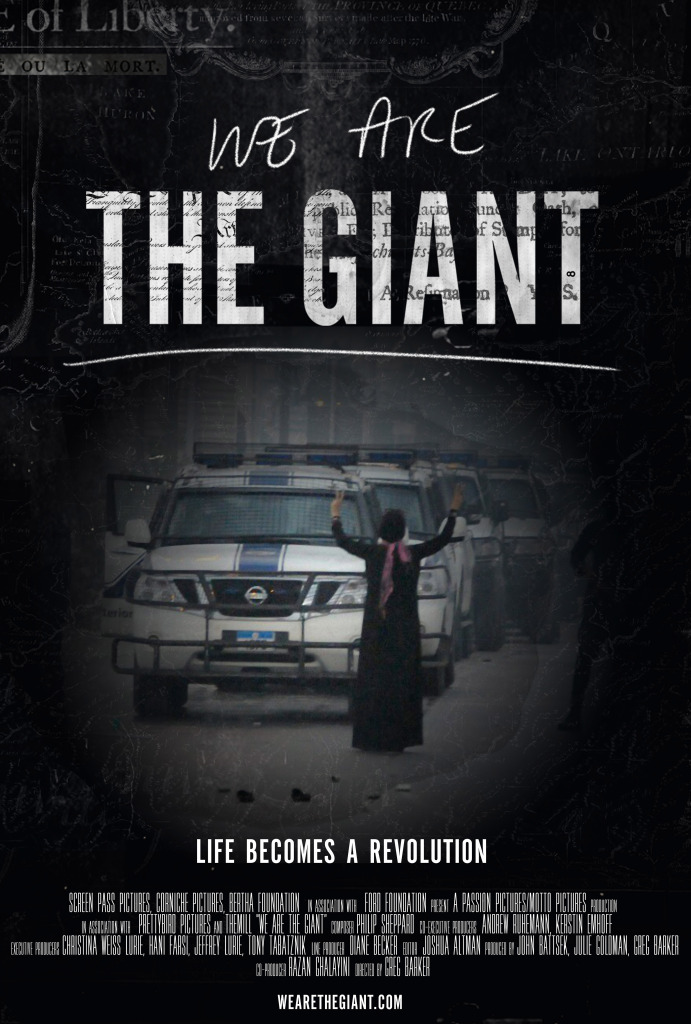 Many in Western culture consider political protest to be romantic; others consider it tantamount to treason. This is particularly true in the United States, where protests held by minority groups demanding equal rights are treated to everything from ridicule to violence. Meanwhile, the grade school tales of brave white men during the time of the American Revolution stick with us into adulthood, leading to the kind of naïve notions that may sound wonderful, but come from people who never had to protest for their rights at all. “Never be afraid to raise your voice for honesty and truth and compassion,” said William Faulkner, a man who, as well-intentioned as he was, never had to endure water hoses or rubber bullets for raising his voice.

We Are the Giant, the new documentary about the Arab Spring revolutions, evokes the feel of an interconnected world with its frequent use of collage featuring photos of protest and revolution from all over the world, including many from the 1960s civil rights movement in the United States. We’re all in this together, according to the film, its title borrowed from a metaphor noted Bahraini revolutionary Abdulhadi al-Khawaja told his daughters: protests for human rights are a David and Goliath story, but people don’t understand that, when they band together, they are the giant, not oppressive governments, and if people would realize this, real changes could be made.

Following three stories of protest and revolution, We Are the Giant opens with Osama Bensadik, a Libyan man who immigrated to Virginia many years ago. In 2011, his American-born son Muhannad returned to a Libya he never knew to join the armed rebellion working to overthrow Muammar Gaddafi. The second story features a movement toward peaceful revolution in Syria, headed by activists Ghassan Yassin and Motaz Murad. These protests were met with extreme force by the government, and many of the formerly non-violent protesters took up arms in response. In both segments, there is astonishing and heartbreaking footage of battles, attacks, and the bodies of civilians killed by their own governments.

The third and longest segment features sisters Maryam and Zainab al-Khawaja, daughters of Abdulhaid al-Khawaja. Though the al-Khawajas are arguably the most well-known activists featured in the film, and the struggle in Bahrain was noted for what many labeled a “betrayal” by President Obama, there is something decidedly off-putting about their story. After the film has focused on an empathetic, humanistic approach where rebellion is done for the greater good, the al-Khawajas focus is entirely on individuals, primarily when the elder al-Khawaja was jailed and his daughter Zainab went on hunger strike.

But as political activist Arundhati Roy has said, “Can the hungry go on a hunger strike? Non-violence is a piece of theatre. You need an audience. What can you do when you have no audience?” The al-Khawaja sisters desperately want an audience; unfortunately, their desire for an audience manifests in distasteful ways. Editing makes it appear as though Zainab was the only person in the streets protesting, for instance. Maryam is seen in a comfortable coffee shop, giving voice to minor irritations. Comparisons to the struggle in Libya are frequently offensive, such as when Maryam asks in an unappealing, snotty tone, “What, our lives aren’t worth what Libyan lives are?”

Moments after we’ve seen an emotionally destroyed Osama Bensadik crying over his dead son, and the discolored, decaying corpses of children lined up on the ground in Syria, her comment is beyond tasteless. But Maryam didn’t make that juxtaposition, We Are the Giant did, betraying a lack of editorial control that inadvertently turns a few issues into juvenile gotchas. It’s a shame, too, because so much of We Are the Giant is worthwhile. The contrasts between each group’s methods, the resentments and difficulties and desperation, are shown with remarkable clarity and honesty and little external judgment. There are important discussions to be had here, and We Are the Giant, despite a few missteps, provides a solid foundation for those discussions.