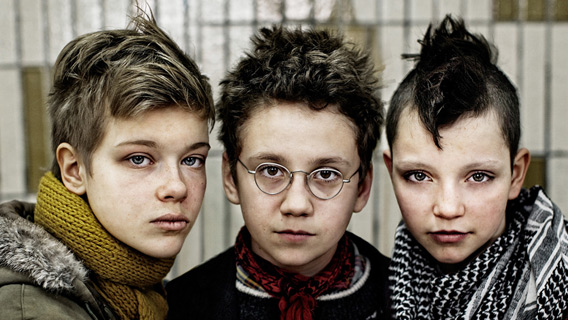 Director Lukas Moodysson’s Together (2000), though lauded as a warm and progressive comedy, indulged in a judgmental tone, mostly directed at gays and women and manifesting as stereotypes invoked as it’s-funny-because-it’s-true moments. Thankfully, Moodysson’s art has matured; he’s developed a keen observer’s eye, one that imbues his latest film, We Are the Best! (2013), with an intelligent, humanist perspective that no longer concerns itself with judging those it portrays.

Based on the graphic novel Never Goodnight, written by Coco Moodysson, We Are the Best! is inspired, delightful, tough and funny. The film follows two young teen punk rock fans, Bobo (Mira Barkhammer) and Klara (Mira Grosin), rebelling against ridiculous adults and their even more ridiculous rules. Shot in almost documentary style with the requisite awkward framing and fast pans, We Are the Best! is as unrefined and earnest as its young leads.

It’s 1982 and punk, as they are told repeatedly, is dead, but Klara and Bobo still embrace its anti-mainstream principles long after everyone else has moved on to New Wave. In an impulsive act of rebellion, the girls strike back against Iron Fist, an all-male group of jerks with a delightfully mediocre rock band. The girls cheerfully point out that Iron Fist failed to follow some of those rules the adults are always going on about, thus forfeited their use of the local youth center’s music room. After much debate between the two epic dinks running the center — “The list is there to prevent chaos!” one declares — side with the girls, but are baffled by their audacity.

Soon the duo take the idea of their own punk band seriously enough to recruit schoolmate Hedvig (Live LeMoyne), a shy, Oxford-shirt-wearing classical guitarist, who expands their definition of punk while they usher her into a life of genial teen rebellion. Their relationship is typical on the surface, with the shallow angst-as-authenticity vibe so notable in 80s teen flicks like Breakfast Club. Just below the surface, however, is an intricate and sympathetic look at pubescent girls navigating the realities of rebellion and discovering the philosophical conflicts within the punk culture they’ve adopted; for all its talk of nonconformity, punk has always required rigid authenticity and, especially in 1982, was hardly friendly to women.

We Are the Best! is not a harsh world filled with rampant misogynists at every turn, but a more realistic world where sexism is a series of small, everyday incidents. The men who run the youth center have their hearts mostly in the right place, but their minds are still stuck in some 70s arena rock timewarp; Bobo’s mother is hardly drawn as an anti-feminist or even an enemy, but the film subtly shows that she places value on herself based on her appeal to men.

There are a host of gentle reminders in We Are the Best! that the world Hedvig, Klara and Bobo live in is a tough one and, in a sign of Moodysson’s assured filmmaking, its their exuberance that breaks down the artificial barriers they’re faced with, not lengthy speeches or overwrought pleas. We Are the Best! is an absolute delight of a film, filled with bright and compelling performances from all three of its leads, and that rare coming-of-age story that truly expands the genre.