This is the SBBN entry for this year’s White Elephant Blogathon, hosted by Philip Tatler IV of Diary of a Country Pickpocket. 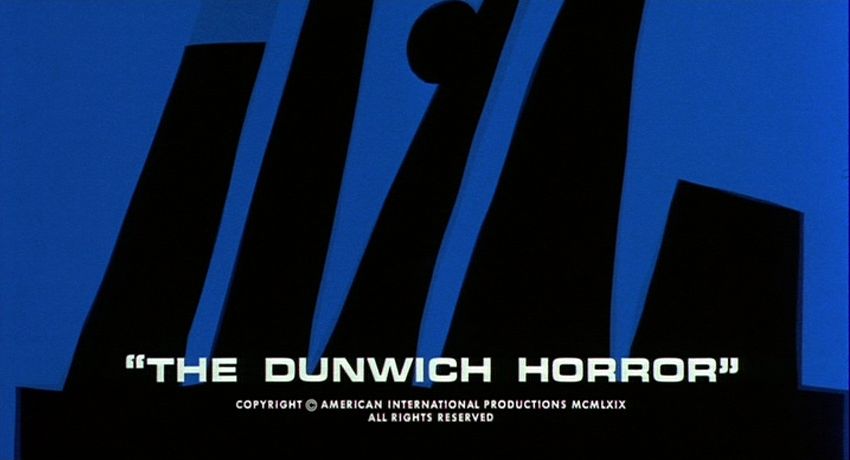 “These terrors are of older standing. They date beyond the body — or without the body, they would have been the same…” – Charles Lamb, Witches and other Night-Fears

To call H.P. Lovecraft’s fiction evocative would be to commit one of the most egregious literary understatements possible, second only to “Bukowski’s poetry is bleak,” or maybe “Shakespeare was kind of wordy.” The Dunwich Horror, a short story written by Lovecraft in 1928, was somewhere between the second and eighth entry in what would become known as The Cthulhu Mythos. In most of these stories, ancient gods from another realm terrorize simple folk in the American Northeast, in frightening tales that — and I must quote Wikipedia here — reflect “the complete irrelevance of mankind in the face of … cosmic horrors.” Evocative!

Roger Corman, born less than two years before the publication of The Dunwich Horror, produced and directed some of the best B-movie horror films during the 1960s, often borrowing from the works of Edgar Allan Poe. Corman was nearing the end of what would be his most artistically productive and compelling period when he stopped making films based on Poe’s stories, and it must have seemed only natural to move on to Lovecraft, a fine horror craftsman who was also inspired by Poe. 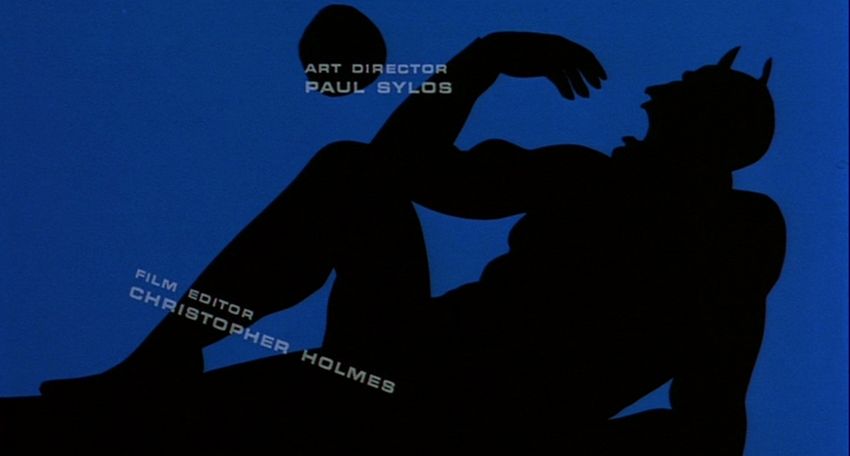 But there was a problem with adapting Lovecraft for modern audiences: the cruder, more paranoid beliefs of many authors of the late 19th century posited that society was on the verge of total collapse due to genetic “degeneration,” and this was reflected in the fiction of the day. Promotion of eugenics as well as a thick streak of racism ran through these tales, and far surpassed the vague evolutionary determinism of Poe’s fiction; worst of all, there was precious little incest to be had, and what’s a Gothic horror story without some good old-fashioned brother-sister lust?

Authors like Robert Lewis Stevenson and H.G. Wells forwent the inbreeding route and instead explored what would happen if humanity failed to evolve, and rather “devolved” back to a more primitive version of mankind. Lovecraft goes one further, coupling his own notoriously repugnant beliefs about people of color, Jews and others with his terrifying tales, creating entire fictitious societies of backwards, “degenerate” peoples who are far too easy to equate with current sociocultural groups. 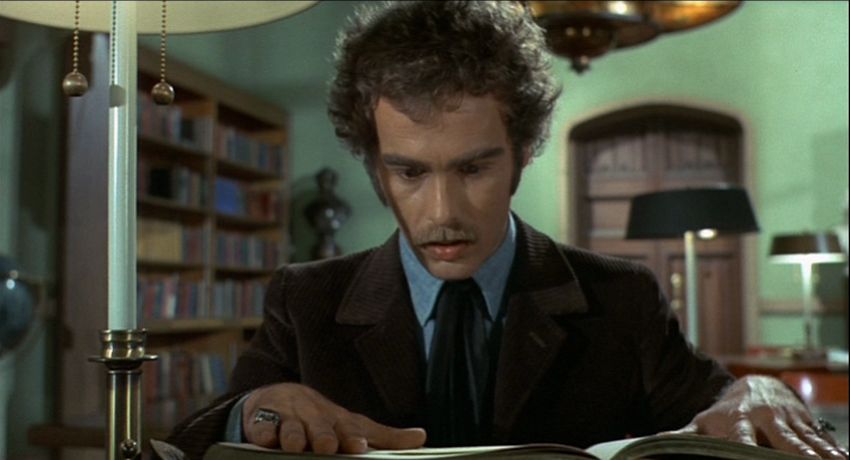 The Dunwich Horror is indeed populated with such people, most notably the Whateley family, who have split at some point in the distant past into normal folks and the “degenerated” genetic line. It’s this line that produces one Wilbur Whateley, who in the book is a crazed half-human goat-like creature, mentioned many times as not being white, because to Lovecraft, not being white was a sign of something very, very wrong. It’s unclear who Whateley is meant to resemble, but the description sounds like a crazed racist throwing as many disparate descriptions into one person to make the ultimate Not White Monster Dude: “there being something almost goatish or animalistic about his thick lips, large-pored, yellowish skin, coarse crinkly hair, and oddly elongated ears…”

Corman, of course, couldn’t go down that particular narrative road in 1970s, as much because of the budget for makeup and special effects as Lovecraft’s personal issues. So Corman took the basic outline of the story — the Whateley family is creepy and weird, with a creepy and weird interest in the occult, especially in the case of the creepy and weird son Wilbur — and turned it into a vague Satanic cult story, and ran with that baby.

The result is The Dunwich Horror, not a half bad B horror flick for 1966; sadly, it was released in 1970. It’s baffling that this could have been released the same year as, oh, I dunno, almost any film in 1970, like Husbands or Patton. Or Loot. But 1970 was a rather odd year in cinema, and The Dunwich Horror wasn’t the only film that looked like it was released a couple years too late, and at least had the good sense to be released in January, thus could claim a little 1969 cred.

The Dunwich Horror opens with some silhouette animation, cute but not nearly as inventive as many of Corman’s other animated and painted credits sequences, and music by none other than Les Baxter that anticipates the synth scores so ubiquitous in the 1970s and 1980s. But don’t get too impressed: the film is really just a rip-off of Rosemary’s Baby (1968). “What if we decided to really dig deep into the whole courtship part of Rosemary’s Baby, and also include some almost nudity?” is what someone surely said at some point during pre-production.

The film wastes no time in establishing the plot. 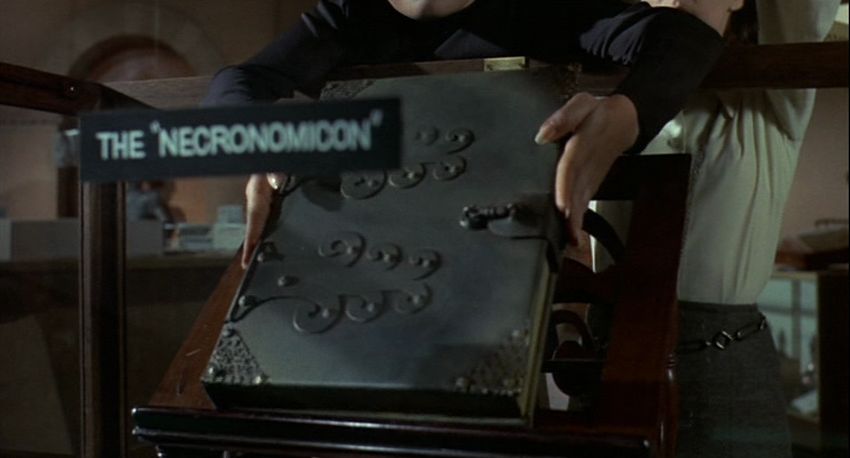 It’s the Necronomicon! A classic Lovecraftian Old Ones tome, though the binding isn’t nearly as spiffy as I’d imagined. I always picture the Old Ones as being stylishly evil, like Nazis, or Karl Lagerfeld. And before I stop talking about the Dunwich Horror short story altogether, I want to mention that this story contained one of Lovecraft’s first mentions of Yog-Sothoth.

Dean Stockwell is Wilbur Whateley, suave and permed and a seriously convincing kind of guy. There are quite a few freakish and effective closeups on Stockwell in the film, especially of his eyes, and Stockwell really sells the creep factor here. In fact, Stockwell and Ed Begley give this film a lot more class and dignity than it deserves, treating the entire enterprise with respect. 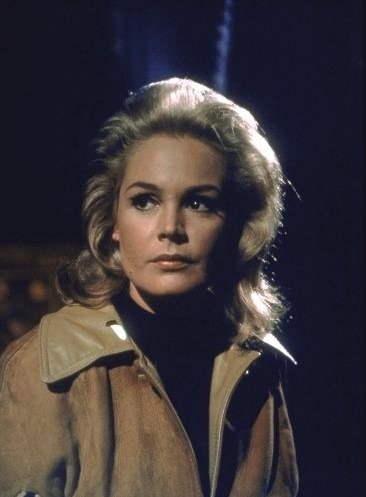 Sandra Dee thinking about all the names she’s going to call her agent once filming wraps on this thing.

Wilbur wants to read this ancient Necronomicon, but historian Henry Armitage (Begley) is suspicious of his motivations, having read about the Whateley family during his research. Sandra Dee as Nancy, the librarian who catches Wilbur’s eye, is about as dull as pasteurized processed cheesefood, but it works to an extent, as it explains why Nancy doesn’t see Wilbur’s crazyface like we do. Her girlfriend Elizabeth (Donna Baccala) doesn’t trust Wilbur and doesn’t know why Nancy has gone off with him, and chews some scenery thinking that will get her the answers. Baccala isn’t terrible, but she does seem like she’s spent the last seven years in a rejection spiral, still auditioning for the role in Marnie (1964) that eventually went to Diane Baker, unable to accept the past.

Wilbur lures I mean brings Nancy home to him to a small, isolated town where the residents are decidedly unfriendly to Whateleys. His father was lynched years earlier for believing in another race of beings from a distant planet, he says, and he was brought up by his grandfather, Old Whateley (Sam Jaffe). I love Sam, he’s a pip, but he runs around in a bathrobe and waves his arms a lot and looks very silly; his dubbed voice makes him sillier. Who dubs Sam Jaffe’s voice, anyway? Roger Corman, that’s who. 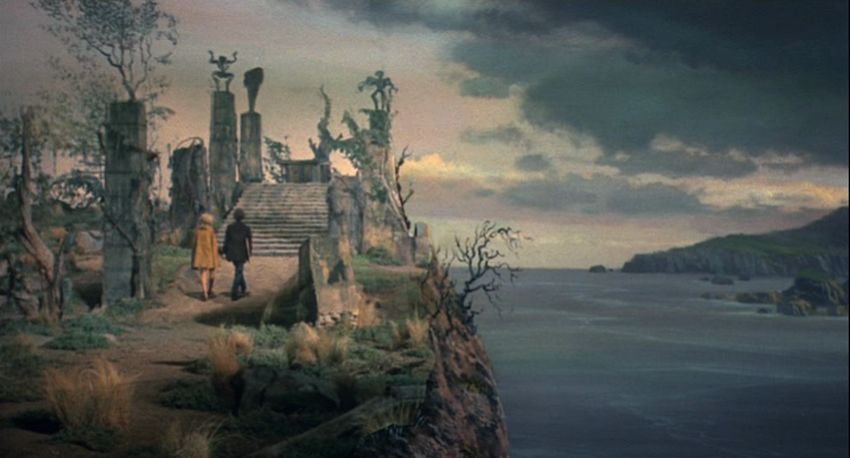 Nancy is shown around the enormous Whateley estate, including this ancient stone altar where human sacrifices were said to have been performed. 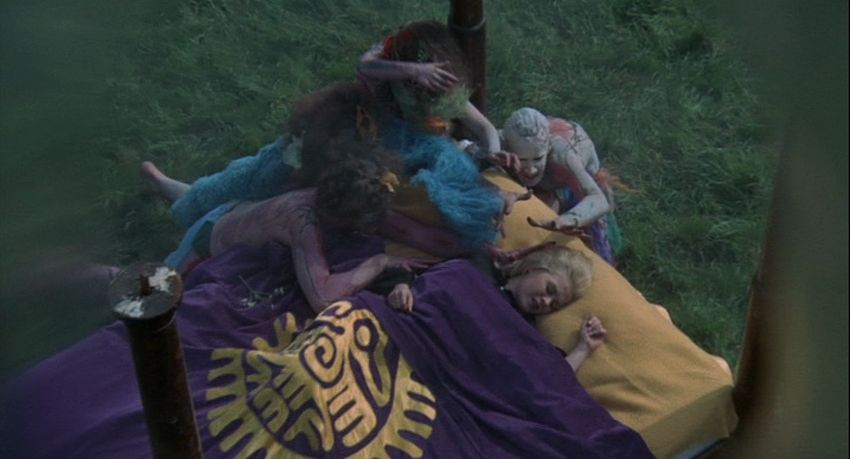 Soon after, she begins to have strange dreams where the cast of a local production of Godspell shows up to irritate her awake.

Meanwhile, Elizabeth and Dr. Armitage start poking around, learn a lot from good old Lloyd Bochner as Dr. Cory, and everyone decides Wilbur is up to no good. 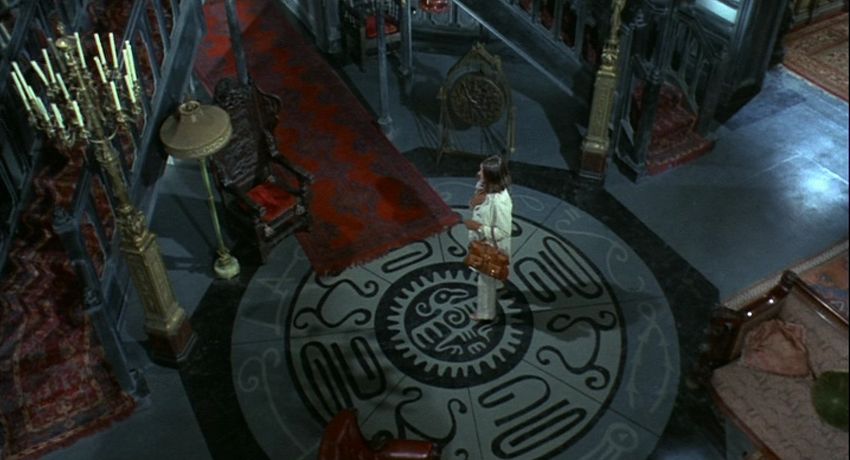 The Dunwich Horror comes at the tail end of the era where the text of a horror film was often conveyed via gorgeous Gothic sets full of bright gemstone colors and framed in long shots. There was none of this namby-pamby metaphorical imagery we’re so used to nowadays, no sir, they put doomed women in the center of rugs that looked like targets and audiences never complained! And if they borrowed from silent and 1930s horror films and shot through cheesecloth, or used a whole bunch of bits from White Zombie (1932), then by god you took it and you liked it! 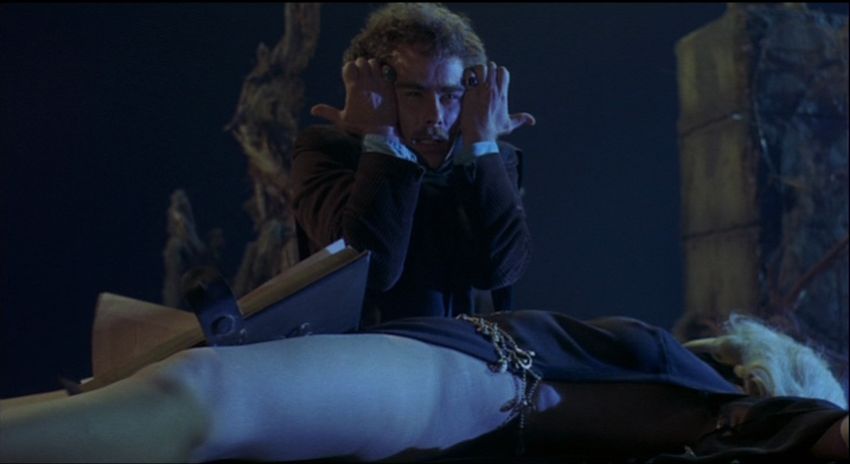 …but, no matter what the old publicity you find tells you, that is not Sandra Dee but an uncredited body double in that revealing robe. The woman’s face is always turned away in medium shots that show a lot of skin, and those shots are cut into a series of tight close-ups on Dee’s face, to give the illusion that it’s Dee’s body we’re seeing. Also, if you look closely, the two women have different fingernails, the body double with significantly shorter nails than Dee’s were.

As so often happens in a Corman film, things go tits up at the finale. Some scenes are daytime, some are night, and they’re all intercut together so who’s to say? Talia Shire wrecks her car for no reason, the entire screen will go red or green like you’ve just dropped some bargain basement acid and are having the weakest of trips, then an Old One shows up and he looks like a bunch of spring-loaded snakes that pop out of peanut brittle cans, all tied together with some floss and pantyhose. He also turns monochrome colors, like green and purple, and it’s all very weak, except for that moment Dean Stockwell crosses his eyes and flaps his hands on the side of his head. That’s how you call a cthulhu. 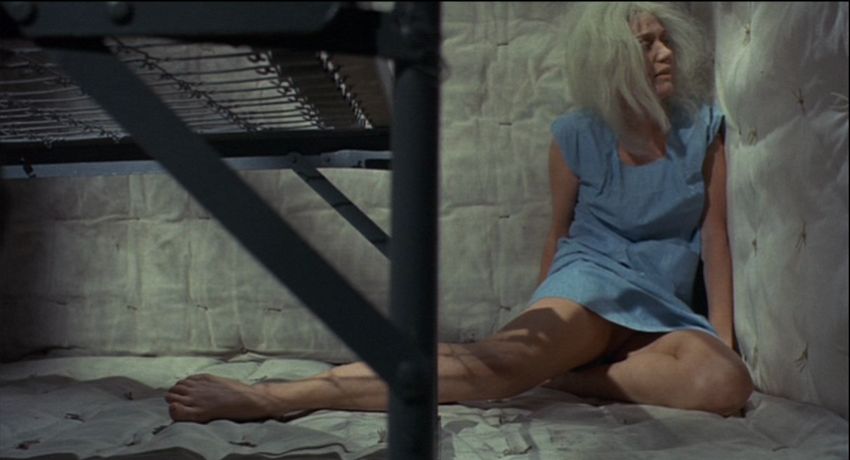 There was also a subplot about Wilbur’s mother in an asylum. They gave her panties the same color as her skin so it looked like she was naked. Tasteful, non?

That’s about it. The Dunwich Horror isn’t necessarily bad, at least not in the way you’re thinking. It’s boring at times, silly at others, and dated throughout, but for Corman’s wooglie period between his classic 1960s fare and the edgier, campier 1970s work, it’s pretty good. If you want to read more, better things about The Dunwich Horror, you can’t go wrong with Christianne’s post at Krell Laboratories — includes visual verification of how to call a cthulhu — as well as the Gateway Cinephile article here.