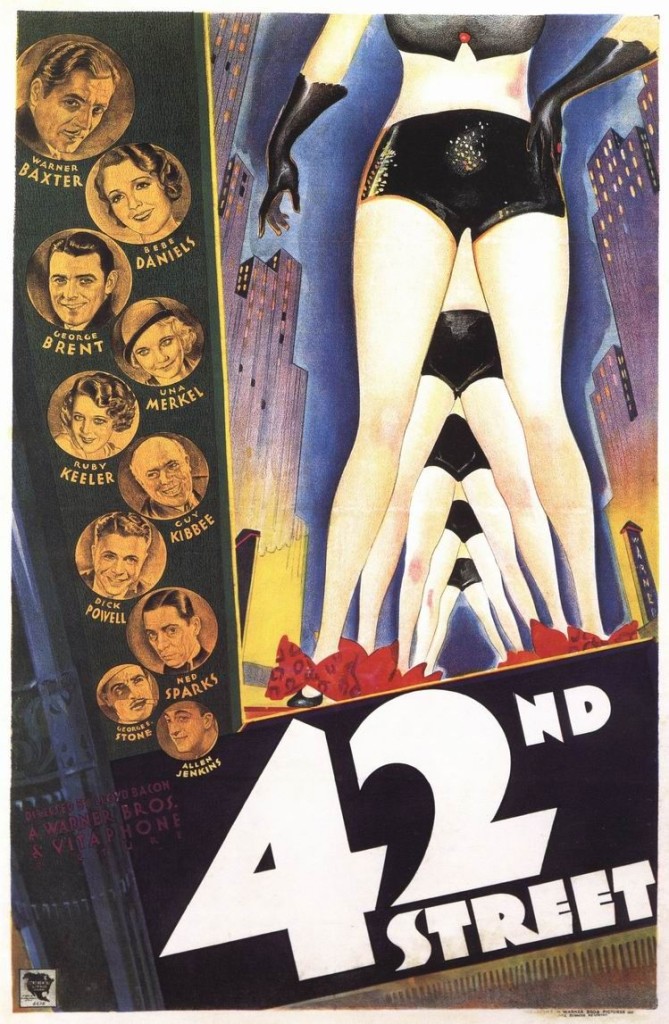 In 1933, at the height of the Depression, a nation in desperate need of distraction broke box office records for the lavish Hollywood musical 42nd Street. This unabashed slice of wish fulfillment is an undisputed cinematic classic, the granddaddy of all Hollywood backstage musicals, and now out on Blu-ray courtesy Warner Archives.

Theater director Julian Marsh (Warner Baxter) has one last shot at creating a hit on the stage. Despite a lofty career, the recent economic downturn has tapped his resources; moreover, he’s in ill health and on the verge of another nervous breakdown. He gets financing for a play called “Pretty Lady” which he hopes to turn into a smash hit, and at the demands of Abner Dillon, a horndog old financier (Guy Kibbee), the beautiful Dorothy Brock (Bebe Daniels) is brought in as the lead. Dorothy has taken up with Abner — hey, a girl’s gotta survive — but she’s also seeing her old flame Pat Denning (George Brent) on the side. Abner’s cuckolding threatens the production; if Dorothy isn’t his and his alone, he has no interest in financing “Pretty Lady.”

The love triangle is all but a subplot, as most of the action in 42nd Street is backstage and during the rehearsals, focusing on the naïve young Peggy (Ruby Keeler). A member of the chorus thanks to the unlikely assistance of two wise-cracking chorus girls, Lorraine (Una Merkel) and Ann (Ginger Rogers), Peggy attracts the attention of the juvenile lead, Billy Lawler (Dick Powell)… and also catches the eye of Pat Denning, who is bristling at his supporting role to Dorothy’s stardom. Soon Peggy finds herself in the Broadway spotlight, and in the immortal words of Julian Marsh, on opening night, she’s gonna go out on stage a youngster, but she’s gotta come back a star.

By keeping everything light, thanks primarily to Keeler, the ingenue-iest ingenue who ever ingenued, none of the romantic entanglements cause much concern. It’s the backstage drama that keeps us interested, and more than eight decades later, the film is still a fun and compelling watch. It’s a little creaky sometimes, every so often resembling 1930’s Chasing Rainbows more than the Broadway Melody of 1936, but by the time the musical opens in the final act, the film is a fully modern spectacle; as my beloved Mordaunt Hall wrote in 1934, “It is a film which reveals the forward strides made in this particular medium.” 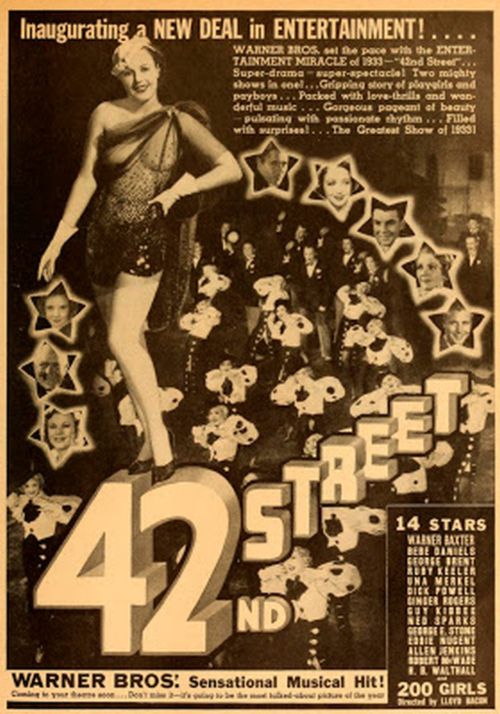 “If the gods had descended on Manhattan, there couldn’t have been more excitement.”
Photoplay on the 1933 New York premiere of 42nd Street
(Advertisement from the April, 1933 issue of Photoplay, courtesy The Ginger Rogers Resource)

Probably the most interesting thing about 42nd Street is its political subtext, or rather, it’s political not-very-sub-text. As the British Film Institute’s Film Classics, Volume One quite accurately points out, in 1932, as 42nd Street was being filmed, much of the country was practically clamoring for a dictator. That’s not hyperbole — Vanity Fair and other magazines very specifically called for a “dictator,” and one senator even said that what the United States needed to get out of the crushing Depression was “its own Mussolini.”

Warner Bros. apparently set out to create 42nd Street as a pro-Roosevelt, pro-New Deal type of movie. The film itself has a surplus of bosses, from Julian to Abner to the stage manager (George E. Stone) and other assistants (Ned Sparks, Allen Jenkins), to all the Warner Bros. bosses who appeared in countless promotional appearances during filming and as the movie was released. Many of these promotional events involved politicians, such as the mayors of cities like Denver and Chicago, who spoke before their city’s premiere. Warners also created publicity for the film through fundraisers for FDR’s campaign. The biggest and brightest of these strange political tie-ins was surely The 42nd Street Special, a train that traveled with the film as it opened across the country. The train was publicized as “Warner Bros. New Deal in Entertainment,” and was outfitted with a light-bulb sign that read in four-foot-high letters, “BETTER TIMES.”

Franklin Delano Roosevelt would win the election before the film was released, of course, rendering The 42nd Street Special an expression of victory rather than one of hope; the “New Deal of Entertainment” motto was modified to include the mention of the upcoming inauguration. Unsurprisingly, however, after the entertainment press had spent so much time calling for a dictator, FDR was immediately besieged by those claiming he had appointed himself a dictator, a claim that, also unsurprisingly, is still made today.

Julian was the fictitious benign dictator behind “Pretty Lady,” but a real-life, not-so-benign dictator was behind the incredible dance sequences in the film: Busby Berkeley. His chorus girls, all in the same outfits and same platinum blonde wigs, dance the same moves at the same time as everyone else. These women are objectified to the point of almost ceasing to exist; in fact, they’re filmed at such a distance, from the back, or hidden behind props so often that sometimes it’s impossible for us to tell with our own eyes if these chorus girls are real or not. Berkeley’s militaristic choreography adds to the political themes, of course. Those beautiful, kaleidoscopic patterns could not have been achieved without stripping the individual dancers of their identity and forcing them to work as a unit under one hyper-controlling leader.

In fact, throughout the film, individual goals are devalued. Peggy, both as a chorine and later as the lead, is reminded repeatedly that her work is for the benefit of 200 employees of the show. Abner is reminded of this, too, while Ann and Dorothy make individual sacrifices for the good of the many. Most tellingly, Ann and Lorraine help a newbie out for what narratively seems like no reason, but their generosity fits the politics of the film. Most famously, there is the finale, a heartbreaking moment when an entire audience exiting the theater grouses about the director who just gave them this terrific show, blaming him for probably wanting to take individual credit when he most certainly, to their eyes, does not deserve it. It’s a darkly comic ending, but one that also reinforces the film’s ideology.

The performances in 42nd Street are all solid, with the possible exception of Brent, who does a good job but seems miscast. There’s quite a bit of culture shock in this film, though, especially considering various characters’ viability in the entertainment industry. Bebe Daniels is only 31 but plays a has-been, and looks like one, too, right down to the extra work “needed” in her personal presentation, versus the younger Keeler’s natural and casual look. Warner Baxter who, like Daniels, was a silent film star just a few short years earlier, is 41 years old in 42nd Street, but looks two decades older. What’s striking is that, in 1933, it wasn’t unreasonable to think of a 41-year-old man as nearing retirement and already suffering from a host of health problems. Both Daniels and Baxter give tremendous performances, perhaps in part because their characters’ lack of options rang true to their own post-silent-era circumstances. 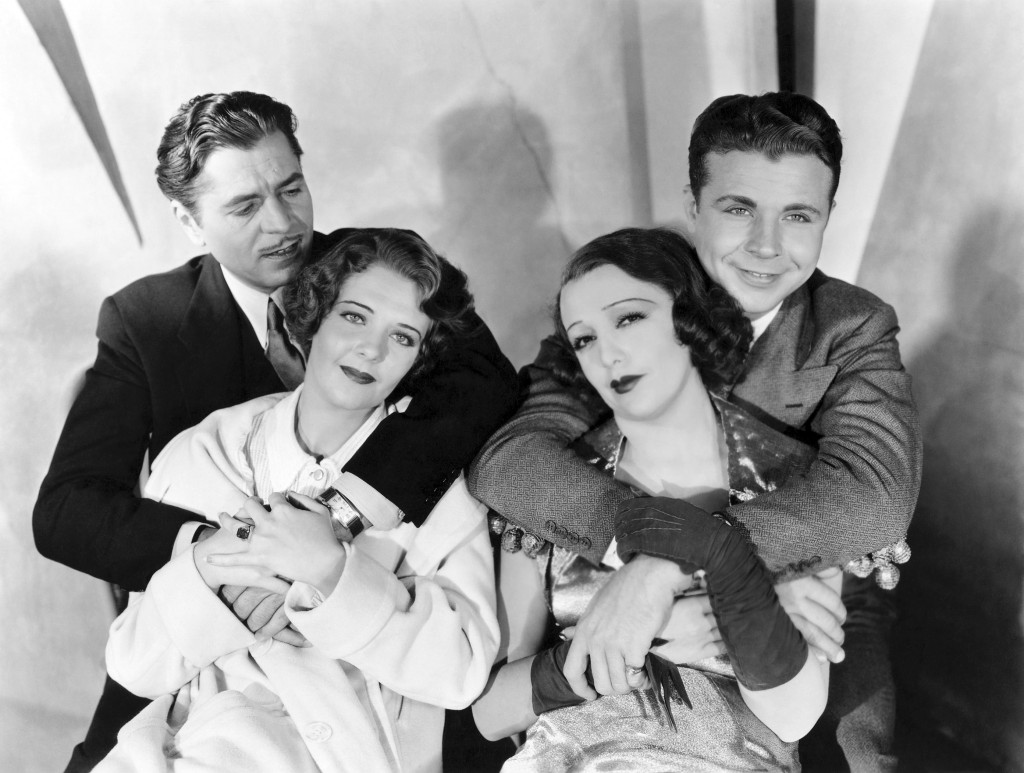 Ruby Keeler is the undisputed star of the show, however, and, somewhat strangely, the most interesting character on screen. It’s strange because Peggy is so naïve that it’s sometimes impossible to believe, and the kind of wide-eyed innocence she embodies is rarely compelling. But Peggy is also carefree, relaxed, and strong enough to handle ridiculously stressful situations. As for Keeler’s dancing, well, it’s one of those things we classic film fans will be arguing about until the sun goes supernova. Steve Cohan in The Sound of Musicals says that any perceptions of Keeler’s lack of ability we have today is entirely due to our own ignorance; as a “buck dancer,” the stomp that Keeler performs is meant to be loud and exactly on the beat, and she is a “virtuoso” of the style.

That said, I think even Cohan would admit that Ruby is just not engaged in a lot of her scenes, and she shows a determined lack of experience. You can clearly see her mouthing along to other characters’ words at times. Her eyes drift, she stares at her feet as she dances, there is something really strange going on with her right arm, she rushes for her mark more than once, and a few times she looks off camera, searching for someone to apparently nod to her to keep going. And as terrific as her buck dancing style may have been, you can’t imagine Bebe Daniels’ character having done any of this; the film was so obviously choreographed for Keeler that any claim that her character was meant to be a replacement is impossible to believe.

But, strange as it is to say, the music and dancing are only part of the reason to watch 42nd Street. This is a pre-Code, mind you, and the snide asides from Ann and Lorraine are a treasure, as are the incredible one-liners from Barry (Ned Sparks). Annie’s monocle and little doggie, straight from the more fashionable cafes of the Weimar Republic, are a hoot, as are Lorraine’s outfits and her inability to actually dance, despite always getting Andy to cast her in the chorus.

The Warner Archive DVD comes with a ton of special features, such as the 2006 featurette “From Book to Screen to Stage.” There are three vintage Warner shorts: “Hollywood Newsreel,” “A Trip Through a Hollywood Studio,” and “Harry Warren: America’s Foremost Composer.” Two promotional items are included, the “42nd Street Special” short and vintage trailer, plus two 1933 Warner Bros. cartoons, “Young and Healthy” and “Shuffle Off to Buffalo.”

The special features are not subtitled and, at least on my copy, two of the vintage shorts were corrupted files and did not work. That said, I have roughly 50 MOD Warner Archive discs (most DVD, two Blu-ray) and this is the first one I’ve gotten that has had technical problems.

As for the quality, unless you’ve seen this on the big screen, you have never seen 42nd Street look this good. The details are so clear that you can see the brush strokes in the hand-painted title screens. You get the usual costuming details that you were never meant to see — the laces on Brent’s girdle, the seams of Daniel’s wig, lint flying around in some scenes — but that’s part of the fun of Blu-ray. The cartoon “Young and Healthy” is in desperate need of deinterlacing, though “Shuffle” is in 1080p24 format and thus looks terrific.

For screen captures and a technical review, check out Blu-ray.com’s review here.