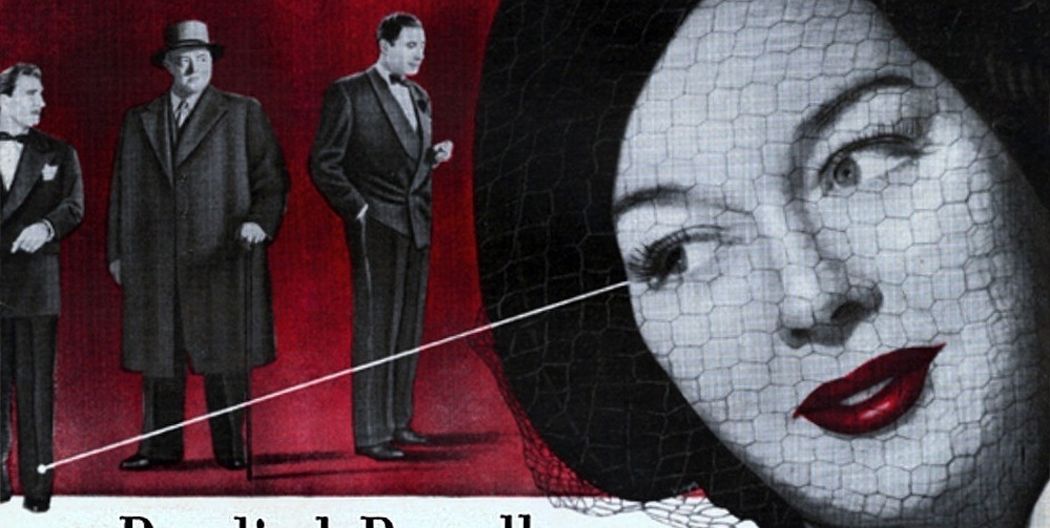 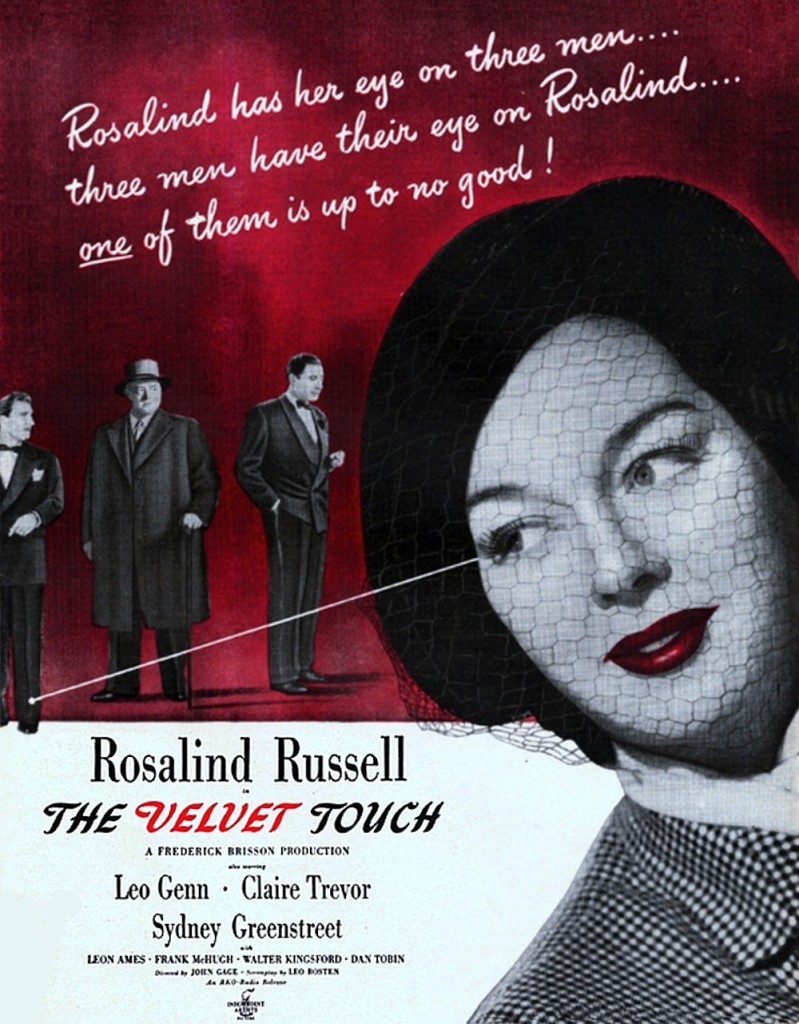 “Boy,” I can hear you saying now, “I can’t believe no one made a movie that was a cross between Laura, Mildred Pierce and All About Eve.” Well, folks, I am here to make your day: The Velvet Touch, the 1948 drama starring Rosalind Russell, is indeed a mix of murder-based melodrama, set in the witty and urbane world of the theatre (pronounced: “thee-ay-TAH”). Though it possesses less of the sophistication and psychological angst of the other films, Velvet Touch is still a fine movie, lovely to look at and with some really solid performances.

When Valerie Stanton (Rosalind Russell), one of the biggest comedy stars of the Broadway stage for the last decade, decides to branch out into serious drama, she incurs the wrath of her agent Gordon Dunning (Leon Ames). He doesn’t believe she has the acting chops for Ibsen, but more importantly, he wants to control her every move, as he has always done; Gordon and Valerie have been in a dysfunctional relationship for most of her career. Gordon forces her hand by telling columnist and social gadfly Jeff Trent (Dan Tobin) that Valerie has accepted a role in a comedy that she, in reality, has turned down. When she confronts him, he tells her in no uncertain terms that if she doesn’t do what he wants, he’ll tell her architect boyfriend Michael (Leo Genn) that they were once an item.

Actually, it’s worse than that: Gordon makes it clear that he will tell Michael disgusting and demeaning things about her sexual past, and as he tells Valerie this, he’s grabbing at her, forcing her against his desk, practically spitting in her face as he threatens her. In a panic, she grabs an award statuette off his desk… 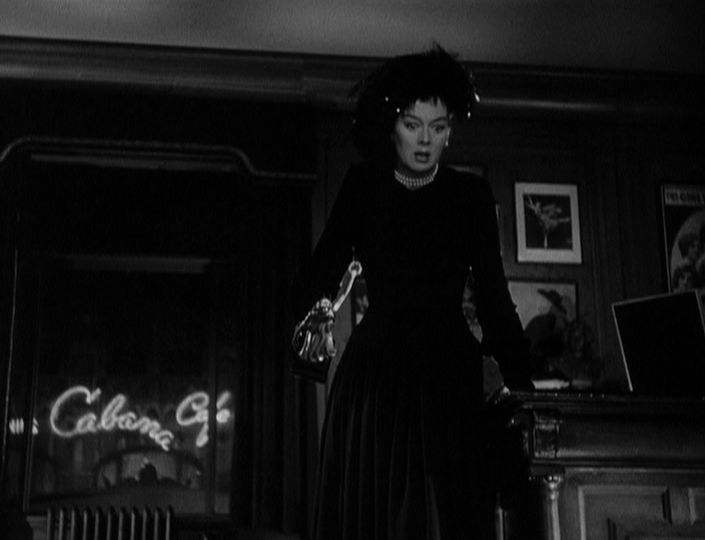 …and now Gordon is really most sincerely dead, and missed by no one.

No one, that is, but Marian Webster (Claire Trevor), Valerie’s co-star and an actress with a name that just screams desperation on the part of the screenwriter. “It was 2:00 AM, I couldn’t think of a name for this character, but then I glanced over at the dictionary on my shelf and voila! I am genius!” Marian knows Valerie must have had a hand in Gordon’s murder, but Valerie, thanks to her evening gloves and a little luck, left no trace behind. As Valerie rehearses for her most important role in the Ibsen drama “Hedda Gabler,” she has to fight her guilty conscience and stay one step ahead of Marian’s wrath and police Captain Danbury’s (Sydney Greenstreet) suspicions. 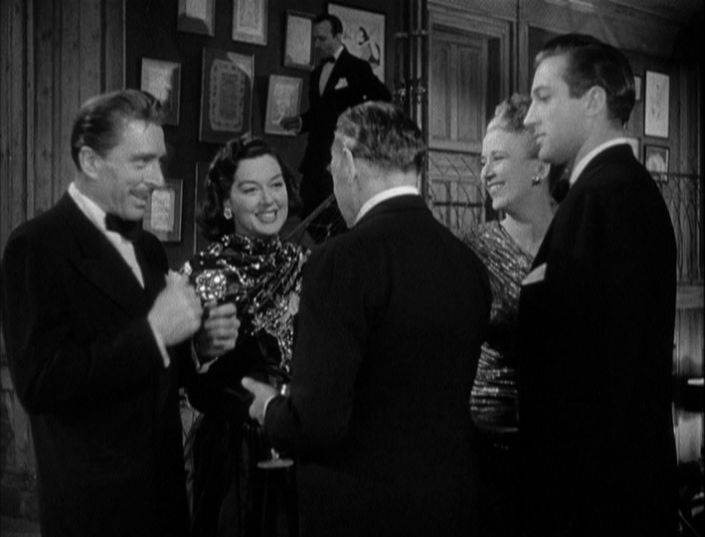 The Velvet Touch is a unique entry in the post-war melodrama genre, a film that embraces the tropes of a half-dozen films with never any intent to settle down and commit to just one. It’s got your standard potboiler fare mixed in with the wit of a fabulous theatrical comedy, some noir stylings, a murder mystery-thriller feel, and featured fashions by Travis Banton — there’s even a mention of the “New Look,” which had been unveiled by Christian Dior the year prior.

Banton’s coat for Russell was copied for Kim Basinger in L.A. Confidential.

Velvet Touch also routinely sticks its tongue out at the rules set forth by the Production Code Administration, not only in the implications Gordon lets fly about Valerie’s, er, adventurous nature, but in Michael’s frank admission that he has bedded many women, and in a scene of Jeff openly flirting with Michael over lunch. But the film can only push the PCA so far; a murder was committed, and a price must be paid. 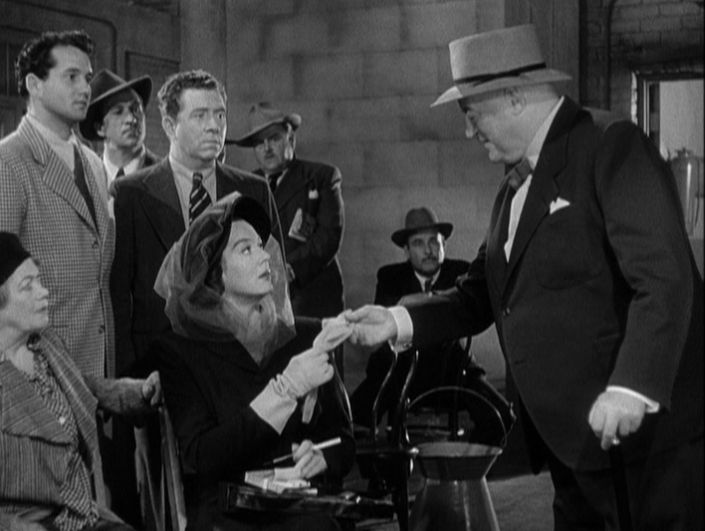 Frank McHugh (pictured, back left) co-stars, as does Teresa Harris as Valerie’s assistant and maid.

Because it was 1948, critics, audiences, and even the film itself didn’t approach the murder as self defense, but rather as a perverse manifestation of diva temperament. That doesn’t entirely work, however, as Valerie isn’t a diva; if anything, she’s a fledgling diva, a comedienne who is nice to her fans, but who wants a loftier (and, presumably, more serious) career as a dramatic actress. Even when Michael initially fails to recognize her as a star, she takes it with sardonic good humor, and as they get to know each other, he essentially takes over her life, doing everything from ordering for her at restaurants to schooling her in proper manners.

And she loves every minute of it. If she’s a diva, she’s a bad one. 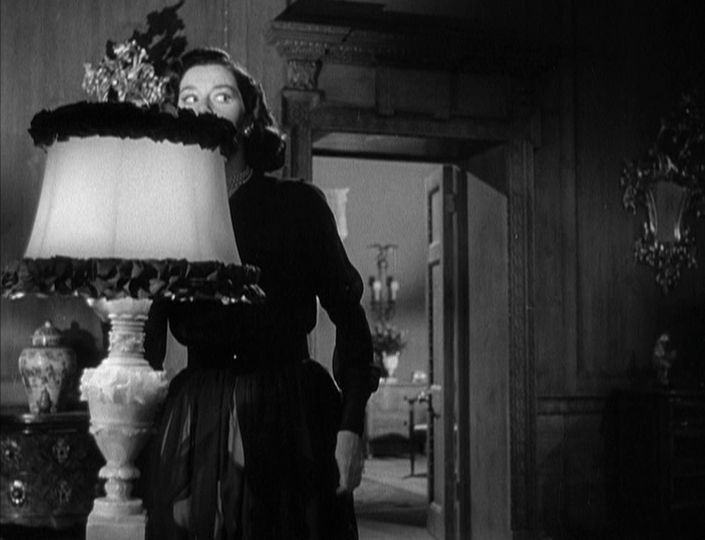 In truth, it seems very likely that The Velvet Touch never meant to make the murder a clear-cut case of wrongdoing, but in fact wanted the audience to not only sympathize with Valerie, but relate to her. Bosley Crowther didn’t agree, considering her behaviors to be inconsistent, but if in fact the tragedy of this film is not that Valerie has thrown away her life, but that she was never going to get away with a very justifiable homicide, then Velvet Touch works far better than most people gave it credit for at the time.

The main attraction in Velvet Touch are the performances, which are all quite good, even in supporting parts. Greenstreet is a real delight, and Russell shows that she had better acting chops than the studio ever gave her credit for. Claire Trevor just grabs hold of her role by the throat and won’t let go, and steals every scene she’s in.

Another attraction in the film is the cinematography, heavily reminiscent of late-period noir, albeit a noir chock full of fabulous, beaded gowns, and there are a few scenes that feature a really lovely deep focus that you don’t often see in films of this era. There is a playfulness in Velvet Touch, too — watch for the scene of Captain Danbury carefully sitting in a folding chair — and a few twists toward the finale that add depth to an otherwise typical programmer.

For the first time since a 1990s VHS release, The Velvet Touch is now available on home video, in a MOD DVD from Warner Archive. It’s the standard bare-bones DVD release, with a solid print that retains some grain, and nicely shows off the deepest blacks and sharp, pin-point whites that feature in the cinematography. The Velvet Touch offers something for everyone, and is just enough of a twist on an old standby to keep even the most jaded classic film buff entertained.