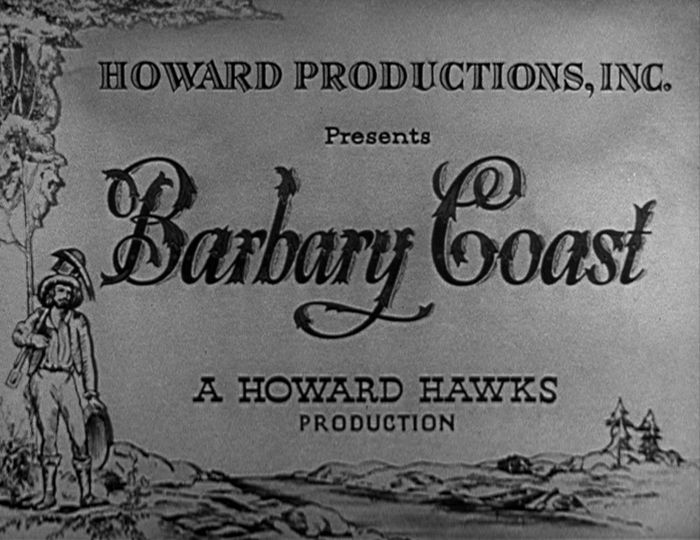 The Flying Cloud, a ship out of New York, lands in San Francisco after over 100 days at sea. The sole female passenger, one Miss Mary Rutledge (Miriam Hopkins), is cynical and aloof, and upon her arrival in the town, it’s no wonder: she’s essentially a mail-order bride sent to marry a man she doesn’t love. But he was a man who struck it rich during the gold rush of the 1850s and had plenty of money, or at least had money, before he was killed in a duel. Determined to stay and even more determined to find a rich man, Mary immediately sets her sights on the crooked gambler who killed her fiance and took his gold, the notorious Luis Chamalis (Edward G. Robinson). Chamalis, aware that women were so rare in San Francisco, especially in the red light district known as the Barbary Coast, that they were practically commodities, hires Mary on as the hostess at his roulette table.

Barbary Coast (1935) was based on Herbert Asbury’s Barbary Coast: An Informal History of the San Francisco Underworld, published in 1933. Directed by Howard Hawks and produced by Sam Goldwyn, Barbary Coast is a lush costume drama with a somewhat undeserved reputation for having only used Asbury’s title while disregarding the real meat of his book. While it’s true that many concessions were made to appease the Production Code Administration, much of Barbary Coast takes Asbury’s novel far too literally.

See, for example, the first few paragraphs in this excerpt about the comparative lack of women in the Barbary Coast area of San Francisco. The film so closely mirrors Asbury’s text, right down to the “adoring crowds” and “boisterous salutations,” that it’s as though someone wrote the script while following the book sentence by sentence. 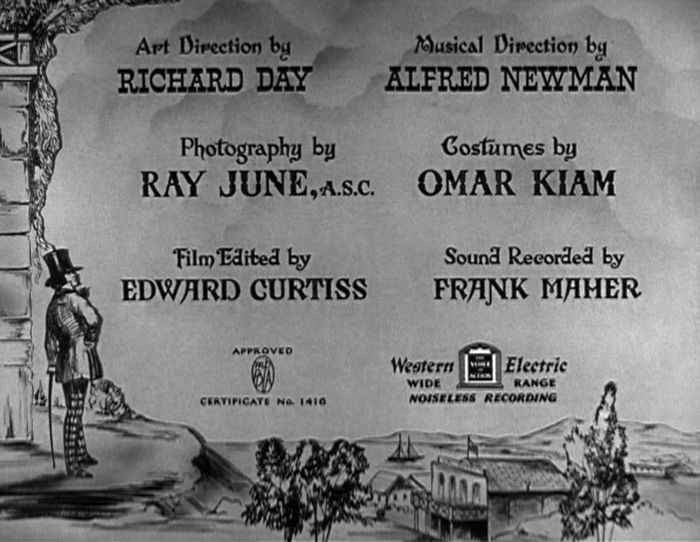 The title credits display a reckless disregard for font uniformity.

That’s not to say changes weren’t made, because the PCA and moralists across the country were scandalized by the very idea of a film based on this informal history. In Vincente Minnelli’s The Bad and the Beautiful, Dick Powell plays James Lee Bartlow, an author whose Southern American history book, ostensibly an academic tome, became a best seller because he included all the saucy bits of history most other authors left out. Bartlow was based on Asbury, at least in part, and Asbury’s book about San Francisco scandalized some of America, and titillated the rest of it. As Harrison’s Reports (now infamously) said when Goldwyn announced the film, Asbury’s book was “one of the filthiest, vilest and most degrading books that have ever been chosen for the screen.” 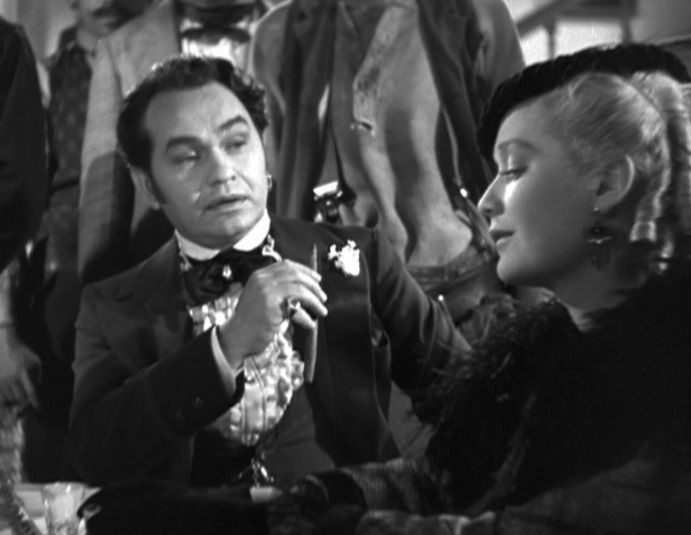 Indeed, the PCA complained bitterly about the script, rejecting the first draft entirely, and pressing for many changes in subsequent versions. The extant PCA file about Barbary Coast contains a note that condemns Goldwyn for eschewing “his old-time artistic supremacy” with this film, instead indulging in the “salacious or the near-salacious.” The biggest issue, apparently, was that the name “Barbary Coast” was synonymous with the phrase “red light district.” Will Hays asked Goldwyn to cancel the film altogether, and later, was reportedly obsessed with getting him to at least change the title. Joseph Breen of the PCA would advocate for Goldwyn, however, saying that despite the title, the film itself — after many script revisions, of course — was “completely acceptable under the Code.”

One of the things Breen liked about the film was that a gangster-type characters was lynched. In his quest to rid the cinematic world of the spectre of gangster heroes that flourished before the Code, he approved of the punishment of these characters in later, post-Code films. Barbary Coast references the 1850s San Francisco Committee of Vigilance, known for the lynching of criminals they claimed corrupt authorities were allowing to flourish, so lynching plays a heavy role in the narrative. The NAACP and other organizations, however, protested the film for “glorifying lynching,” ironically condemning the Code for its immorality.

In Barbary Coast, Chamalis runs San Francisco like the petty dictator he is; the character is essentially an early-1930s gangster with a dangly gold earring and puffy pirate sleeves, and no attempt is made to give Chamalis the French accent a recent immigrant like him would have had. His power manifests in an ability to stifle a free press and subvert justice, and it’s this behavior from him and his fellow gangsters that the film feels deserves lynching. The film doesn’t realize that vigilantes are also subverting justice. 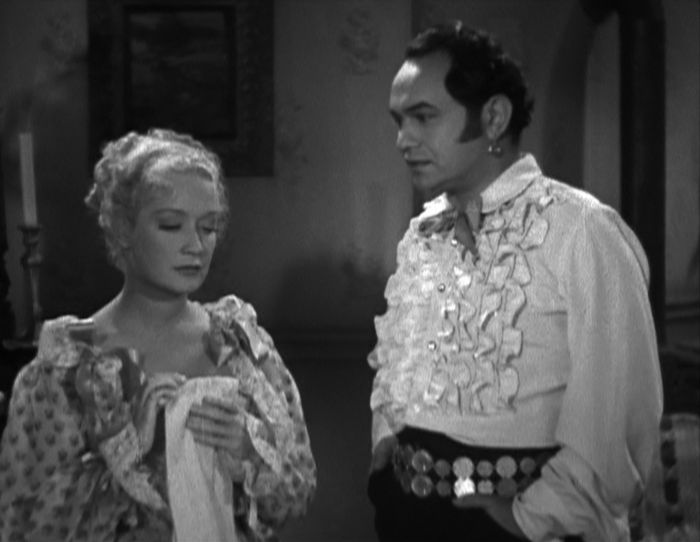 Robinson, with his short stature and a face frequently compared to that of a bulldog’s, may have been more physically suitable for a 1930s gangster character, but he had an undeniable charisma and confidence no matter what period his film is set in. Even if he looks as ridiculous here as Bela Lugosi did in White Zombie, he’s also as sexy as Bela was in White Zombie. Mary is having none of it, though. She apparently has no issue with running a crooked roulette table and practically seducing miners out of their winnings, but taking up with Chamalis would be too much.

A chance encounter with Jim Carmichael (Joel McCrea), a young miner on his way back to his hometown of New York with two years’ worth of gold, reminds Mary of the life she had before she was waylaid by greed. Carmichael, meant to be a somewhat literary man, a romantic and a dreamer, has the same outfit John Wayne sported in The Big Trail, a peculiar Midwestern twang despite having grown up near Gramercy Park, and his literary references are clumsy and frequently off-topic. Carmichael is not supposed to be a joke, but he is, and it’s baffling that Mary could care about him. 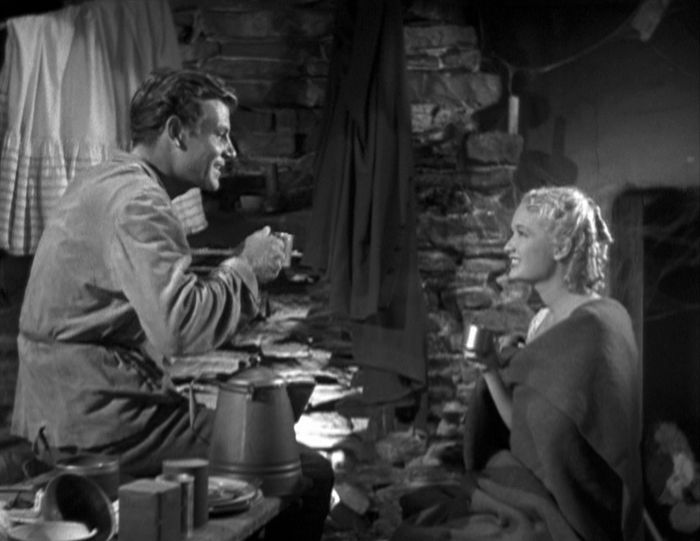 Ben Hecht, one half of the film’s screenwriting duo, complained about the many changes made to their script to get it past the Code. He and MacArthur were so upset that they asked for their names to be taken off the screenplay; they were retained, though it’s unclear why. Hecht, ranting about the script changes, was once quoted as saying, “Miriam Hopkins came to the Barbary Coast and wandered around like a confused Goldwyn Girl.”

It’s an unfair attack on Hopkins’ abilities to a point, but about 40 minutes in, she develops the same clipped mid-Atlantic accent with the same moralistic rah-rah American dialogue that so many other actresses in so many other films of the era have, and her performance suffers. She’s a bit of a confused character, too, someone who gets upset about the lies and hypocrisies of the town, when she herself is also a liar, cheat and hypocrite. 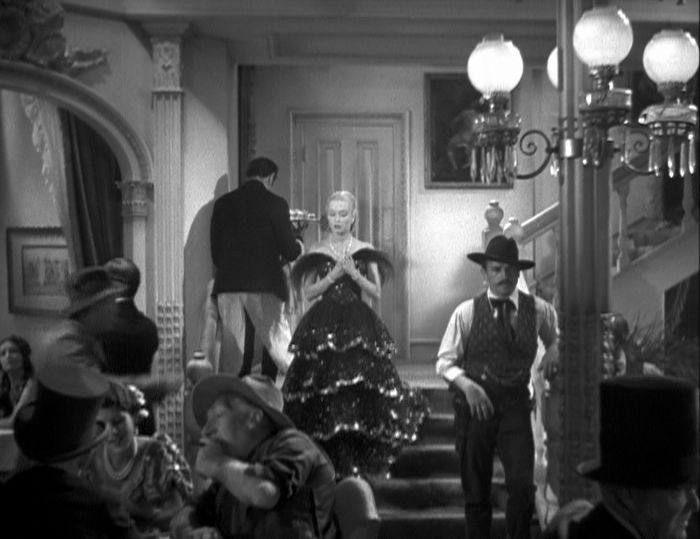 For modern audiences, Barbary Coast is a tough sell, most notably due to the racism. Your typical 1930s Goldwyn film tends to be opulent, grand, and to go that extra mile when it comes to racial stereotypes. And it’s always in such a self-conscious manner, too, with that one character who decries racism, but who is also made fun of, because being racist is portrayed as just good common sense in many of these Goldwyn films. There are specific references to non-white races as being almost subhuman, especially when Mary shouts in despair, “Do you think I’m still a white woman?” By being a greedy woman, a cheater who associates with criminals, she has lost her whiteness, and therefore, her value. Many in the classic film fandom nowadays like to claim that racism in movies of this era was simply a thoughtless product of its time, but in Barbary Coast, that’s clearly not true; plenty of thought went into this particular brand of racism.

The film, as troubling as it is, still holds some fascination simply because of its pedigree and its interesting production history. As a period drama, Barbary Coast hits a little too lightly on actual history, and a little too heavily on prefab Hollywood romance. Still, despite some general flakiness and the unmistakable hint of changes made to appease moralists, the script is pretty solid. In fact, there are scenes in Barbary Coast that were so good, they showed up again years later in movies like Casablanca and Jezebel.

Barbary Coast is available on MOD DVD from Warner Archive.