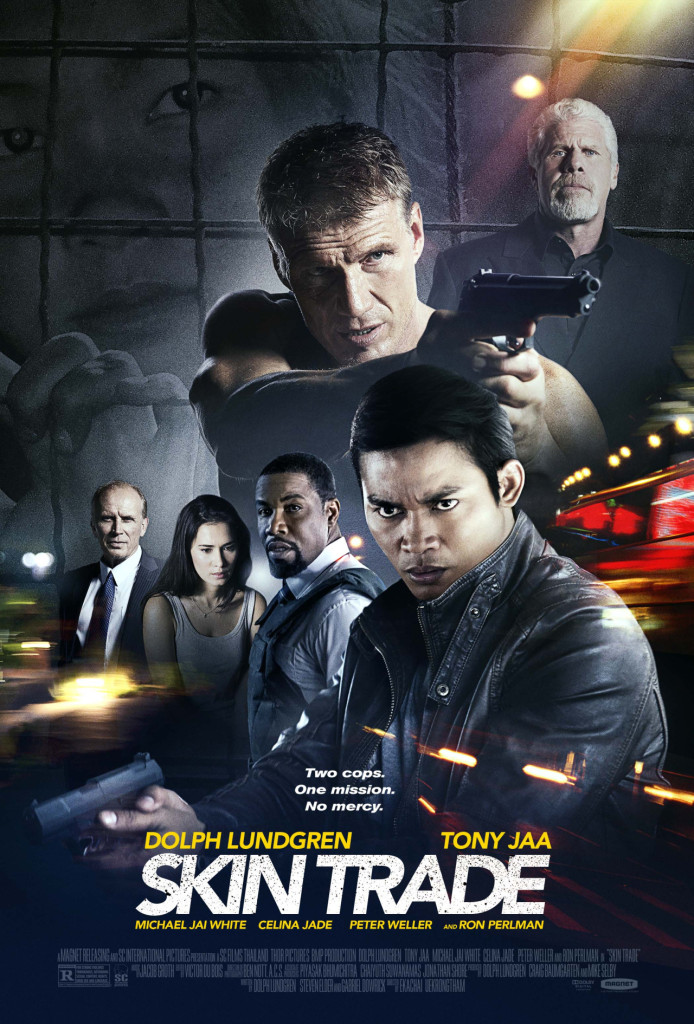 Newark police officer Nick (Dolph Lundgren) has spent years hunting down the Serbian family responsible for a large human trafficking operation. On the other side of the world, officer Tony Vitayakul (Tony Jaa) is after the same thing, only he has a very personal stake in the case: his girlfriend Min (Celina Jade) is one of the women forced into sex work by the Dragovich family. When Nick corners patriarch Viktor Dragovich (Ron Perlman) and his son Andre (Michael G. Selby) at a New Jersey dock, a shootout ensues, and Andre is killed. In retaliation, Viktor sends his men out to murder Nick and his family, but Nick survives. With justice the furthest thing from his mind, Nick heads to Southeast Asia to get revenge of his own.

Skin Trade boasts an impressive cast, with Peter Weller and Ron Perlman putting in solid supporting turns, and Michael Jai White carrying much of the film. Maturity and experience suit Dolph Lundgren well; his acting has improved exponentially over the years, and his aging, fatigued police officer Nick had the potential to be a really interesting character. Unfortunately, Skin Trade features a hoary old chestnut of a plot, little more than an excuse to get some action on.

The main attraction here is the action, which Skin Trade delivers in spades. Jaa is fantastic in his action scenes, and Dolph does world-weariness well. Some of the fight choreography is stilted, however, with obliging stuntmen and editing that could use a little tightening; several scenes begin with a brief, split-second glimpse of the set-up for the shot, and at other times, the camera pulls back too far, revealing the mechanics of the stunt. At other times, though, the film is frankly beautiful, with Ben Mott’s cinematography in the first third full of solid hues underneath eye-catching, geometric patterns. The art direction eventually gives way to sets so obviously inspired by Only God Forgives that it’s distracting, however, until the film grinds to a halt on a typically dull and dusty faux military set.

The martial arts action genre may have begun to expand roles for women beyond stereotypes in the early 1970s, but it’s also a genre that loves to use its women as pawns and playthings. Skin Trade is not about adding anything new to the genre, but planting its feet firmly into the safe, shallow end of the pool, which is how it ended up being the creepy kind of flick that uses the exploitation of young girls as an indicator of evil, while at the same time exploiting the young actresses who appear in the film. Scenes of women stripping and servicing their clients while wearing push-up bras, at most, are presented as sexy fun, the film hoping we in the audience forget that each of these women are held against their will. In Skin Trade, the women are nothing but objects to be disposed of to spur a man into action, or things to be rescued to give the man something to do. Women might as well be suitcases of cash or falcon statuettes, for all the humanity they’re given.

The final act devolves into one shootout and fight after another, everything jumbled together without much thought to the film’s alleged plot. In the midst of this is a particularly fine showdown between White and Jaa, however, featuring choreography that matches the characters’ personae — something many martial arts and action films never take into consideration. It’s a great watch, at least for a few minutes, but when it ends you’re reminded once again that Skin Trade is a film where the good is far outweighed by the mundane.