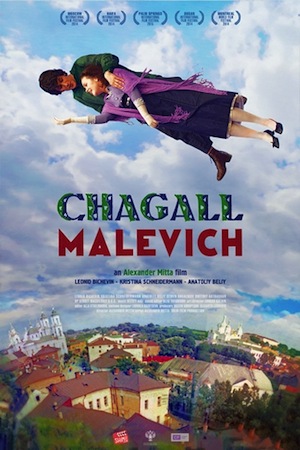 “An artist should have his own world,” declares Marc Chagall in writer-director Aleksandr Mitta’s vibrant and playful Chagall-Malevich. Focusing on the first years of the Russian Revolution, this fictional account follows Chagall, played by the handsome and tousled Leonid Bichevin, through the founding of his Vitebsk Arts College, part of a massive endeavor to bring art to the masses. With his beloved wife Bella (Kristina Schneidermann) in tow and minimalist master Kazimir Malevich (Anatoliy Belyy) on his way for an extended stint as guest teacher, Chagall flies, sometimes literally, around Vitebsk, happy in his life’s work.

His happiness has no power to stop the Revolution, however, and death surrounds him. His determination and perseverance in spite of this is meant to be powerful, but instead is undermined in part by the expression of middle-class satisfaction that rests permanently on Chagall’s face. This perpetual smile feels forced in more than a few scenes when the actor struggles to portray this attitude of perma-cheer; when Chagall finally loses his patience and succumbs to the lure of violence, all those smiles of the past scenes feel like cheap audience manipulation.

The light-hearted tone of the film, with its bright crayon-box colors and whimsical flights of fancy, never fully meshes with the bloodshed and persecution that exists in the real world. Chagall and Malevich are meant to personify the power and freedom of art, yet never transcend the atrocities of war, not even when they’re confounding their persecutors with laughter and splashes of bright paint. Instead, they both seem to shrug off what’s going on around them.

Though he shares title billing with Chagall, it takes a long time for Malevich to ever arrive, and the wait was not necessarily worthwhile. Broadly drawn as an artist whose work is the philosophical opposite of Chagall’s, his arrival spawns a host of loud, rhetoric-filled encounters amongst the students — one of which occurs amongst a large group of wet, nude men in the community baths — and ultimately hastens the town’s embrace of Marxism.

To its credit, Chagall-Malevich refuses to come down on any side politically, though does so with such steadfast resolve that there are lengthy stretches of the film that seem less like artistic joy than they do Communist propaganda. It’s done with so much good will, however, that one isn’t sure what to make of it, though with such a selective and specific choice of socialist principles portrayed, it seems likely that a little revisionism has crept into this expressionistic sketch of life during the Revolution.

There are some technical problems with Chagall-Malevich that mar its affect, which is a serious issue in a film that relies so heavily on fantasy. The use of fades and filters to vary the colors at the edges of the frame, reminiscent of Chagall’s famous painting I and the Village, are very successful, while more complicated effects trip over themselves, looking cheap and clumsy. Malevich’s minimalist approach known as Suprematism is certainly a better fit in the film, considering the sketchy special effects, which is likely why the big bold lines of his work slice through the backgrounds so often, and why the flying bodies and twisting heads of Chagall’s paintings are (thankfully) rare.

Chagall-Malevich is an audacious film, as bonkers as the flamboyant 1970s cinema of Ken Russell and Federico Fellini, but family-friendly and almost entirely sexless. That’s not to say this movie has an identity crisis, because Chagall-Malevich is very happy to be its own little creation, despite the rather defensive tone the film’s introduction screen and promotional blurbs take, reassuring everyone that Chagall’s images are not being “exploited.” These disclaimers are entirely unnecessary; this film of all films should know that, when it comes to art, no explanations are necessary. Chagall-Malevich would benefit from a less confrontational and defensive tone and let its own ambition speak for itself.