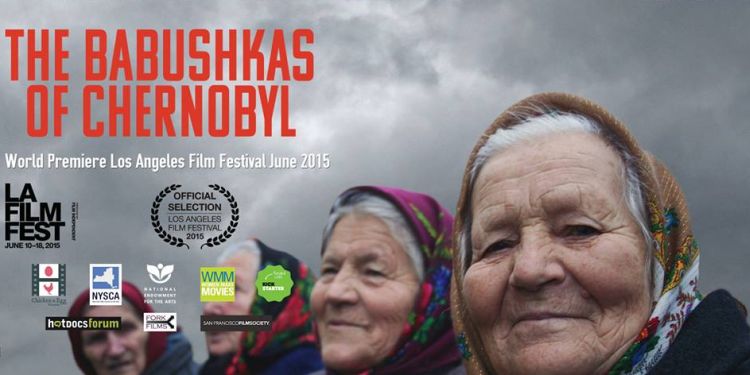 With beautiful, classically framed scenery that highlights the healthy appearance of a land that is in reality riddled with invisible dangers, The Babushkas of Chernobyl takes us into the lives of the last few women still living in what’s known as the Exclusion Zone. A large area of the Ukraine heavily affected by radiation from the Chernobyl disaster, the Exclusion Zone is, at least officially, abandoned; unofficially, after the disaster, many people returned to the only place that they had ever called home. Now, all that remain are tiny villages of those who sneaked back illegally, nearly 100 people combined, and almost all women.

With the bare minimum of science brought into the story, The Babushkas of Chernobyl retains what some would call innocence, and what others would call denial. But what becomes clear very early on in this documentary, from the directorial team of Anne Bogart and Holly Morris, is that in asking the babushkas to leave their homes, they were being asked to give up too much.

In the late 1980s, there were nearly 2,500 returnees, including Hanna Zavorotnya and her family, featured a few years ago in this in-depth article at The Telegraph; it was Hanna who infamously told officials who tried to prevent them from living in the Zone, “Shoot us and dig the grave; otherwise, we’re staying.” Hanna and her sister Sonia, both featured in Babushkas of Chernobyl, are now the last living members of her family. Hanna farms, forages, and raises small animals like pigs and chickens to live on, while occasionally visiting with the few remaining women who live nearby.

One of those women, Valentyna, is a force of nature. Having survived cancer she acquired while helping clean up the Chernobyl disaster, she and her husband returned to their home, though he, like almost all the other men in the Exclusion Zone, has long since died. She fishes and hunts and leaves little treats for the animals who still live in the area. As Valentyna explains, life never really stopped in the Exclusion Zone, “nature just took over.”

The few babushkas who remain demand a quiet respect, and many from outside the Zone are helpless to resist the cultural conventions that drive them to visit, even to eat and drink what they know is contaminated food, because to refuse would be to insult the babushkas. Also roaming the vast empty lands are interlopers are known as “stalkers,” their name derived from a first-person video game which is set in the Chernobyl Zone and has spurred their interest. We’re told they are often young men detached from reality, and a moment later shown amateur footage from one of the stalkers’ excursions as they brag about the excitement of entering an abandoned building where no one has set foot for decades. No one, that is, except the previous groups of stalkers responsible for the obscene drawings of cat butts on the walls.

Full of posturing and bravado, these teens certainly think of themselves as hardcore, but if a brief clip of some stalkers standing at attention and addressing a babushka they met in the forest as “ma’am” is any indication, even they know that it’s the elderly women who live there who are the real badasses. They’ve survived decades of men who were apparently hell-bent on destroying them — Hitler, Stalin, government officials and drunken husbands — and are now thriving in what has become, mostly through attrition, a no-man’s land. Don’t let their lovely songs and beautiful, flowered wardrobes fool you: these are not women to take lightly.