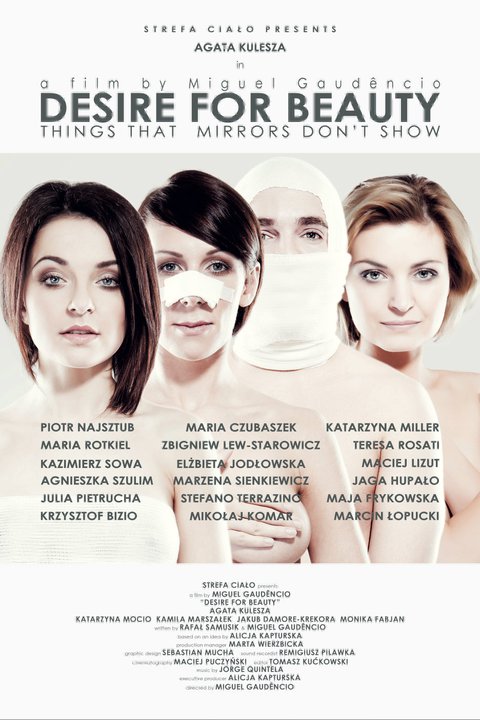 Several months after shooting for Desire for Beauty (2013) wrapped, actress and host Agata Kulesza, at the head of the table during a swanky dinner party for cast and crew, says that when she was approached for this project, she wasn’t sure what exactly director Miguel Gaudêncio meant to accomplish; it’s a safe bet that she is just one of many who don’t know what to make of this film. Neither documentary nor fiction, Desire for Beauty is instead a reality-show type of project meant to explore the psychological reasons behind plastic surgery. Kulesza is the ostensible star of the show, interviewing four allegedly everyday people undergoing surgery and quizzing them about their decision.

These people, however, are already quite attractive; in fact, they look like actors. Monika, reeling from the end of a love affair, looks exactly like a young Joanne Woodward, and Kuba is in fact the nickname of working actor Jakub Damore-Krekora. He wants to have a lot of work done, but it’s subtle work, and the results are unquestionably effective. There’s also Kasia, a gorgeous woman with striking blue eyes, who has opted for breast augmentation. Finally, there is Kamila, who is rather insultingly portrayed as the “worst case” of the group, due to a misshapen nose that she hopes to have fixed via rhinoplasty.

The treatment of Kamila versus the way the rest of the group are treated is just one of the many strange facets of Desire for Beauty. Reenactments are used to portray Kamila’s childhood, while some of the others get extended personal interviews and artsy fictional segments. The brief fictional encounter Kamila is granted features Agata squinting her eyes at the woman’s new nose and blurting out something mildly insulting.

These segments aren’t just odd, but they also do not integrate well into the film. Their only purpose seems to make you wonder what is real and what isn’t, which completely erases any good will the film may have generated. Similarly, though it’s never stated outright, these four have been specifically chosen to participate, and one presumes have their procedures paid for, by the production. In fact, Kamila and Kasia are seen in the same recovery room, which is strange as they are undergoing such disparate procedures.

The film holds some interest in the showing of the actual surgeries, which can be quite graphic at times, as well as in its choice of interviewees. Included in the film are theologian Kazimierz Sowa, as well as several psychologists and authors. Most notable is Polish journalist Piotr Najsztub, who seems to be included just for the shock factor. He is apparently known for saying that the pressure for women to look beautiful is entirely the fault of the women themselves. They’ve “put themselves in a concentration camp” by worrying about their appearance, Najsztub says, while the film politely fails to mention the journalist’s own carefully cultivated look that involves a series of outlandish and expensive glasses frames and expertly tousled hair.

Despite the stunts that this film indulges in, Gaudêncio manages to approach the subject with a neutrality that is quite welcome. The desperation to look young, beautiful, or just plain different is palpable amongst the group, and it’s equivocal whether we ever really understand their pain or not. Yet Desire for Beauty refuses to take the topic all that seriously, creating a fatal distance between the audience and the subjects that is impossible to overcome.