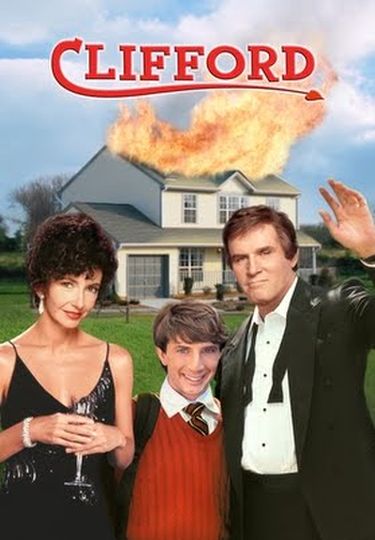 It’s 2050, and creepy priest Father Clifford (Martin Short), at a location meant to look like a Christian orphanage, is talking young Roger (Ben Savage) out of running away. He understands that Roger is running away because something-something-intelligence-boredom, thus begins a heartfelt tale of his own struggles to deal with an overactive imagination when he was young. Soon, we the audience, through no fault of our own, are thrust into a flashback set sixty years ago, when the creepy priest was instead a creepy 10-year-old boy.

Thus opens Clifford (1994, sorta), a movie that cinephiles have struggled to explain for over two decades, and may very well be singular proof that we are all living in an alternate dimension discarded by omniscient (and very irritated) beings who realized that a species who can create such a film is not a species worth saving.

While flying to Hawaii with his family, 10-year-old hellchild Clifford discovers the plane will not be stopping over in L.A. as he had hoped. Angered that he won’t see Dinosaur World, a theme park located in Los Angeles, he talks his way into the cockpit and tries to crash the plane, as one does when one is disappointed. The plane is forced to land in L.A., and Clifford’s very insane father (Richard Kind) pawns the kid off onto his slightly less-crazy uncle Martin (Charles Grodin), who is in the market for a little boy. Specifically, he wants to show his fiancée Sara (Mary Steenburgen) that he’s good with kids, and Clifford is a kid, right? He promises Clifford a trip to Dinosaur World, but when Clifford acts out, he grounds him instead, and Clifford goes on a wild revenge spree against his uncle. 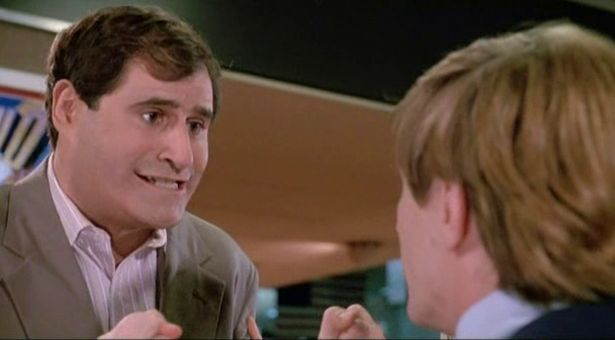 Such a good job with forced perspective tricks to make Martin Short look small. I mean, you can’t tell Richard Kind’s eyes are focused on nothing at all.

Infamously filmed in 1990 and only released four years later, after its home studio Orion went bankrupt, Clifford suffers from a double-strength lack of focus, beginning during the writing and filming in 1990, and continuing years later by editors who clearly had no idea what to do with all this fershlugginer footage on their hands. The film goes to a lot of trouble to portray itself as an adventure story for kids, from the opening title card to the bad cartoon drawings of Clifford having imaginary adventures with dragons and spaceships, with the added bonuses of an old-fashioned and wistful Hollywood orchestral score and the conceit of this being entirely in flashback. 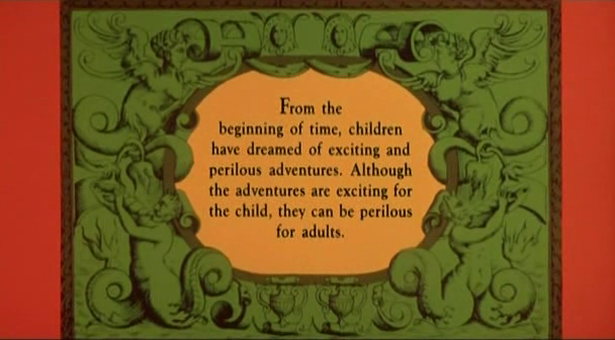 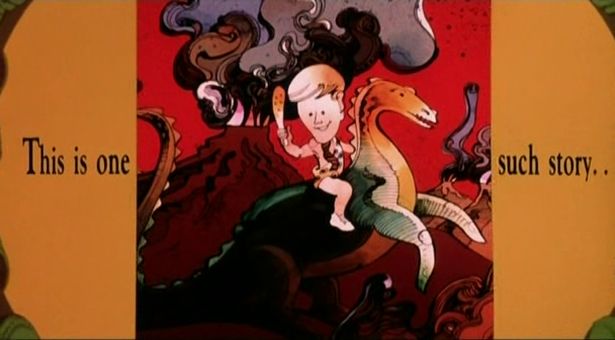 Cartoon Clifford attacks nothing in particular, with a soggy chicken leg.

All this, plus Clifford’s allegedly charming habit of talking to his toy brontosaurus “Stefan” as though he were real, seems to indicate the film meant to be a combination black comedy and family film. Clifford himself was, apparently, meant to be a slightly creepy kid on the surface, a little cretin that freaks you out although you can’t quite put your finger on why; underneath, he was really a monster and a sociopath.

The problem is that all the adults in the film, save Sarah, know exactly what the boy is like from the very beginning of the film. His uncle Martin may not know about the airplane incident, but he certainly knows about Clifford trying to wreck his car, then stalking a kid into a public bathroom and handing him a wad of cash for his costume, all in an attempt to sneak into Dinosaur World with another family. Martin obviously had Clifford’s number within hours of his arrival.

And Clifford’s behavior never escalates, either. From the beginning, his acting out manifests as a jumble of tepid pranks and outright psychotic behavior. That’s why nothing in the film seems the least bit necessary: the secret that he’s a monster is revealed and there is no resolution to be had, unless one counts “he finally gets to Dinosaur World” as a resolution. But why would you? If Clifford’s revenge succeeds and he takes down his uncle Martin, there will be no one to even take him there.

More delightful examples of pointlessness come in the aforementioned near-car-wreck and bathroom incidents. Narratively, there isn’t any reason for Clifford to lose his shit about possibly missing Dinosaur World that early on in the film. He’s still going to Dinosaur World, as far as he knows, just not that exact day, and it isn’t until after he almost kills himself and Martin in the car, then indulges in that creepy bathroom incident, that he gets grounded and told he can’t go to Dinosaur World at all.

Thus ends the first act, with everything established so the real action, in the form of Clifford plotting revenge against Martin, can begin. That we have gotten to this point through inconsistent plotting means nothing to Clifford. It gives no shits about you. In fact, the film is so unconcerned with what it’s doing that it takes the potential clean slate of its second act to repeat the same pattern as the first, i.e. Clifford committing a series of pranks and huge, over-the-top schemes. The only difference is that, this time, he plots to get his uncle thrown in jail. 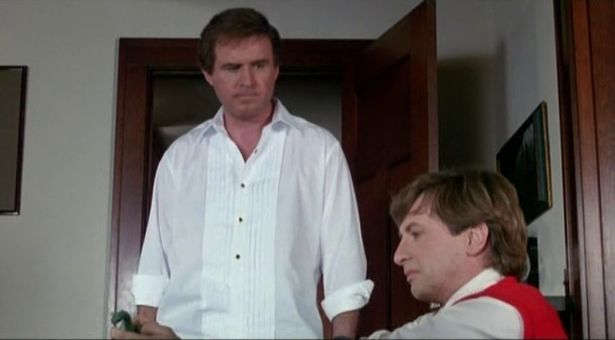 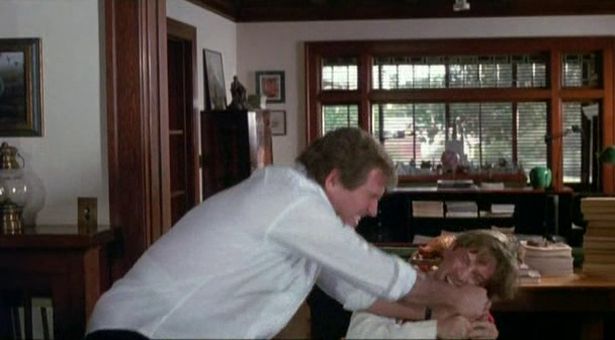 Ladies and gentlemen, the only escalation in the film: exasperation, followed by the attempted murder of a small plastic brontosaurus.

When Martin realizes Clifford faked evidence to have him arrested, the aesthetic of the film approaches the revelation as a turning point: the confrontation between the two at the dinner table is filmed in an ominous low-angle shot, for example, and the bit where Clifford keeps trying to get Stefan back from Martin plays as though it were meant to be creepy-comic respite from the tension in the rest of the scene. But there is no tension, because there is no revelation; Martin already knew Clifford’s true nature. On top of that, the camera barely moves, Grodin’s frustration stays at the same level throughout, and one gets the feeling that the editor thought Clifford’s lies about others pulling his pranks were meant to be believed by the audience. Worst of all, there is almost no build-up to what should have been a hilarious moment, a line Charles Grodin was born to yell: “Look at me like a human boy!”

Any attempt to make sense of this movie will fail, because this is a movie that exists for no reason. It’s not about Martin learning to become human before he falls to the same psychosis that affects his nephew (and his brother), because Martin’s behavior doesn’t change throughout the film any more than Clifford’s does. He’s a control freak and a liar and the possessor of a poorly hidden reservoir of hatred that means he’s often unable to look at people like “a human man.” 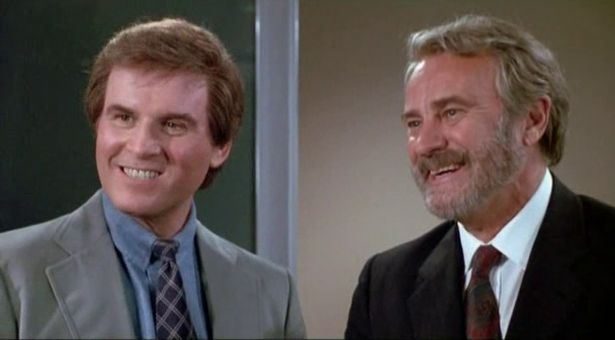 If that’s not enough to disqualify this as a horror flick, what Martin and Clifford do to each other is so tepid by cinematic standards that it fails to hold even passing interest. Clifford, for instance, steals someone’s dog off the flight he came into Los Angeles on, and passes this dog off as his own. When Martin and Clifford arrive at Miss Sarah’s, Clifford chases her cat outside in a scene that was filmed to maximize boredom: shot of cat, reverse shot of Clifford, then a back-to-the-camera shot as a smaller body double for Short actually chases the cat. Then cut to the exterior where the cat hops out the window and the stolen dog gives chase, dragging uncle Martin, who is still holding on to the leash, into a fence.

Aaaaand scene. That’s it, folks. Most of the pranks Clifford plays are exactly this boring, though a few are slightly less boring because fire or police officers or shouting are involved. The reviewers on the IMDb who speak of the “cruelty” in this film must have very weak constitutions, as they seem scarred by scenes of Clifford replacing lip balm with lipstick and pouring a bottle of Tabasco into Martin’s drink.

The only real thing of interest in Clifford is a barely fleshed-out theme of inauthenticity. There is the fact that the film stars a middle-aged man named Martin pretending to be a young boy whose uncle is also named Martin, for starters. Many of Clifford’s pranks involve replacing one thing (a kid in a dinosaur suit, Chap Stik, a cocktail) with something mimicking it (Clifford in a dinosaur suit, lipstick, Tabasco sauce). There is also a bizarre running gag with Gerald Ellis’ toupee. When we first see Ellis, Martin — who you will recall is played by Charles Grodin and his very obvious toupee — pitches an over-the-top fit about Ellis’ toupee, in a scene that plays as though it were meant to be meta-humor. There is also a bit that I suspect most people wouldn’t really get nowadays, where Sarah describes herself as observant, but then a moment later calls a transwoman “ma’am;” the joke, such as it is, means to show her as unobservant because she thought the transwoman was “real.”

It’s offensive today and probably was pretty offensive in 1994, too, but if we set that aside we realize it was one of many examples in the film meant to parallel Clifford’s own inability to understand what is real and what isn’t. He believes Stefan to be real, for instance, and there is a case to be made that he doesn’t comprehend that airplane crashes and felony records are real and very, very permanent. 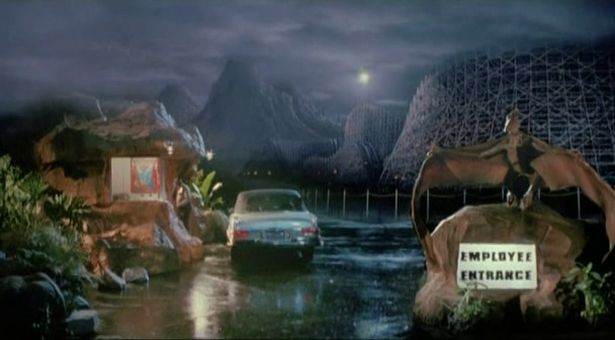 Dinosaur World is apparently a bad matte painting and some rocks made out of papier-mâché .

One is tempted to say that Clifford is not a bad film, simply because it is such an inexplicable film that one assumes there is a cosmic reason for it to exist. But there isn’t. The idea of a black comedy that uses an adult in the role of a child is a decent one, at least on paper, but Short is neither convincing as an actual child nor does he possess the ability to parody. Spoof, sure; his Ed Grimley and Jiminy Glick characters prove that. Parody is sadly beyond him.

Even sadder is that parody is not beyond the rest of the talented cast of Clifford. Charles Grodin, who seems (understandably) soused on occasion (see the poster above), tries his damndest to rescue the film. 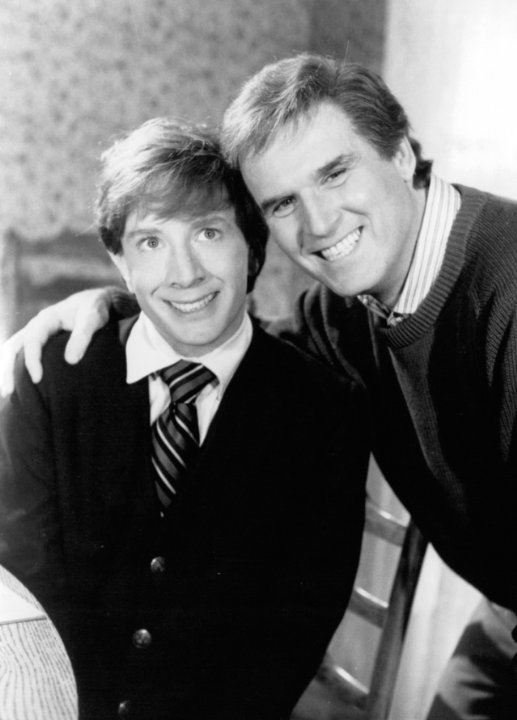 In fact, I suspect he considered committing a few felonies in the name of saving the film. Which felonies in particular I will leave to your imagination.

Speaking of felonies, the scintillating experience of watching Clifford comes courtesy a kind stranger who submitted the film for the 2015 White Elephant Blogathon. Thank you, you delightful cherub, for this experience. I have indeed gazed into the abyss, and found it full of plastic toy dinosaurs piled atop Charles Grodin’s discarded faith in humanity. 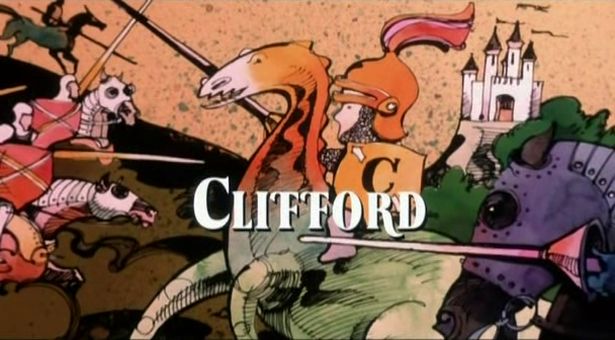