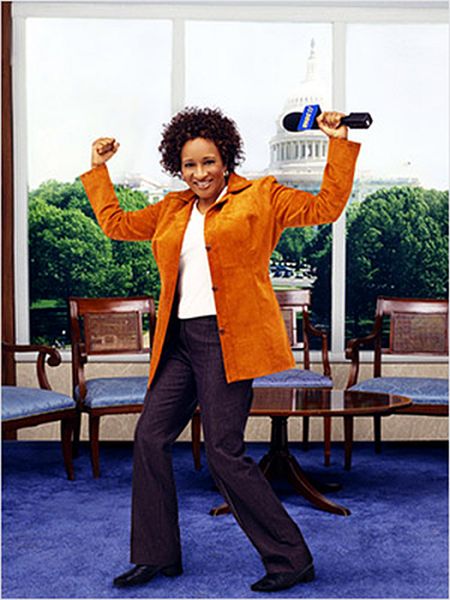 Once again digging into their television vaults, Warner Archives brings us the complete first season of the surprise 2003 Fox comedy hit “Wanda at Large,” now out on DVD. Starring comedian Wanda Sykes as Wanda Hawkins, an outrageous stand-up comedian and local television personality in Washington, D.C., “Wanda at Large” was known for its combination of feel-good family situations and edgy humor. Originally slated to be a six-episode filler show for an open timeslot after “The Bernie Mac Show” on Fox, “Wanda” was intended to move to The WB permanently for its second season. After garnering huge ratings, however, Fox decided to keep “Wanda” for itself. A second season was ordered, but the show disappeared halfway through its second year, only to turn up months later in reruns on TV One.

In the pilot episode, Wanda Hawkins (Sykes) is a comedian who has just quit her day job with the government, and with gigs few and far between, is getting perilously close to running out of money. It’s a semi-autobiographical premise, actually, as Sykes had been working for the National Security Agency a decade prior. Unhappy with her job, she started writing jokes in between filling orders for what she could later call “spy stuff.” Her first time on stage, she wowed the audience, and her career took off. 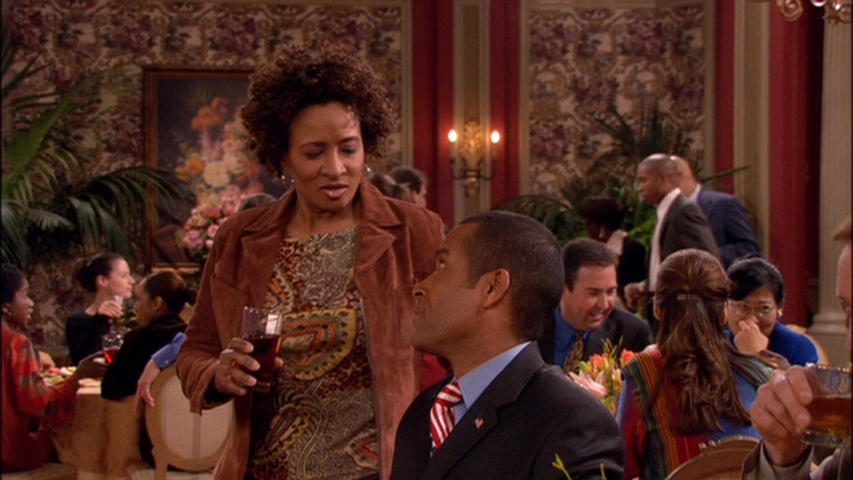 The fictional Wanda Hawkins only briefly mentions her government job, but has a similar path to success thanks to her friend Keith (Dale Godboldo), a segment producer at the fictitious WHDC. She talks her way into a WHDC company party and, a little drunk, begins to make a scene, but the president of the company loves it. They need an outrageous personality for their channel, and after submitting a hilarious demo about how not to buy guns, she’s in.

Unfortunately, as the pilot opens, she’s already out, making what she thinks will be her last segment for WHDC. 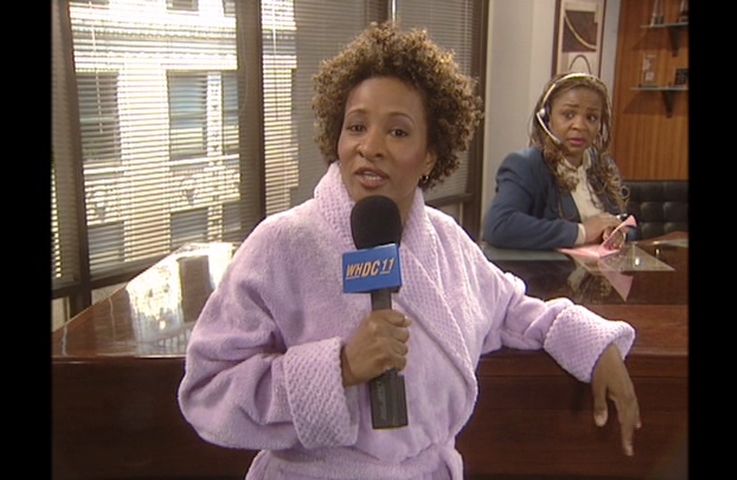 And she’s doing it in a bathrobe, because she’s not gonna get dressed up just to get fired.

Most of the reviews of this Warner Archive release talk about how “Wanda at Large” is a “deep cut” that nobody remembers, though my own personal experience was that, especially during its first season, everyone was talking about “Wanda at Large.” Its ratings were phenomenal, averaging 12 million for those six episodes; in comparison, “The Simpsons” was averaging 10.6 million viewers that season. It’s no wonder Fox kept the show instead of transferring it over to The WB as had been planned.

But then Fox, because it’s Fox, moved “Wanda at Large” in its second season to the Friday Night Death Slot, and the show died quickly, along with “Luis,” which had been given the other half of the Death Slot.

Not that I’m implying anything, but I’ll just leave this here:

…Sykes isn’t shy about her determination to avoid being typecast as just another sassy black woman.

She says she turned down a sitcom proposition that would have had her starring as a maid to a rich white family — and not just a maid, she adds in a get-a-load-of-this tone, but a maid who wins the lottery and decides to stay on with the family anyway.

Another proposal was for a comedy called Loquetia, Sykes says, letting the name linger in the air for a couple of seconds.

“I hung up after that,” she goes on. “I don’t know what the plot was, but I was like, `I’m not playing anybody named Loquetia. I don’t care if she cures cancer, I’m not playing Loquetia.'”

So Sykes went with “Wanda at Large,” and of course someone, namely Terry Kelleher, had to grouse about how unfortunate it was that Sykes would choose such a “jerry-built” sitcom. Yes, because she had so many other great opportunities given to her, right? Not that “Wanda at Large” was ever a bad sitcom, though maybe a little less polished than most.

I don’t want to get all spoilery on you, but Wanda Hawkins doesn’t get fired from WHDC in the pilot episode, and remains at the station to do small human interest segments full of sometimes-raunchy humor, and also to appear on a Sunday political talking head show where she takes all the stuffed shirts down a peg or two. Plenty of the humor in “Wanda” is sociopolitical, often about feminism, race, sexuality, and similar issues. About halfway through the pilot, Sykes and the rest of the cast get their sea legs and start to tackle the issues with more humanity and humor. Also, the acting very much improves, as does the production quality and writing. 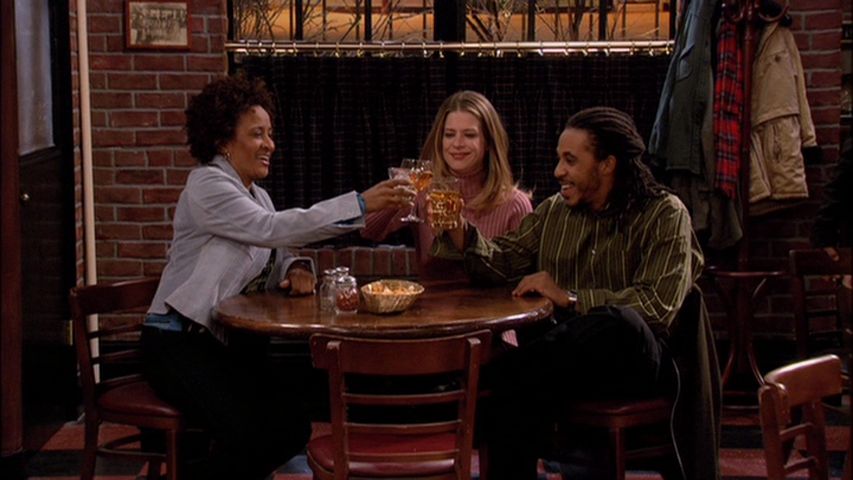 The pilot is a little eyebrow-raising in its extended use of the word “fuck” and “motherfucker,” all bleeped out of course, but even in 2003, it wasn’t exactly common to hear profanity on television. Sure, “Seinfeld” had done basically the same joke a decade earlier, but it didn’t exactly start a trend. (And I know we’re talking about “Wanda at Large” here, but you really should watch that clip, if only to hear Larry David lose it in the audience at the “funny fuck” line.)

But as I was saying, in 2003, profanity on television wasn’t usual. For instance, “Arrested Development” made what we hilariously refer to as “the news” when it used smash cuts to censor the word “fuck” twice, though cleverly edited the scenes so that, when put together, as this intrepid YouTuber has, the entire word can be heard.

That’s what we had to go through to get a little f-bomb in our television shows back then, kids. It was a dark time.

Profanity aside, “Wanda at Large” is a little dated, having been filmed in a gentler era when a “hit it” pun could make someone in the studio audience lose their shit, and when some scenes done on home video cameras were still shown in Academy ratio while the rest of the show was in widescreen. The set for Wanda’s apartment are great, but those for the television station are more bare-bones than a series could ever get away with now. 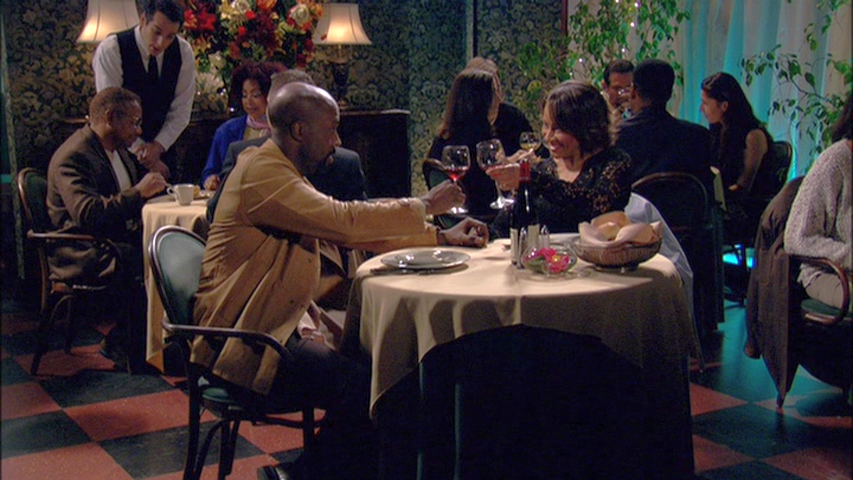 With guest star Mario Joyner in the episode “King Rat.”

“Wanda at Large: The Complete First Season” includes all six episodes, in a bare-bones release with no features and no subtitles. The shows aren’t presented in airdate order on the disc, though it’s possible that they’re shown in the order they were filmed instead. The video and audio quality are good, though there are already some discoloration issues in some of the pilot footage, probably from faded film stock, even though it’s only a 12-year-old show.

Bottom line: “Wanda at Large” is a very funny show, with some pointed humor that is as relevant today as it was over a decade ago. Her stunts in the human interest segments, such as crashing a mens-only country club with a beautiful naked woman, are reminiscent of the kind of Vines and YouTube videos that go viral nowadays. The supporting cast are all exceptional, including Phil Morris and Tammy Lauren. Ann Magnusen appears in several episodes as a recurring character, and some guest stars include Dave Chappelle, Cheryl Hines, George Wallace and more. “Wanda at Large” is fresh enough that it feels current, not like some retro show you’re watching for its sentimental value, and funny enough that it holds up on multiple viewings.