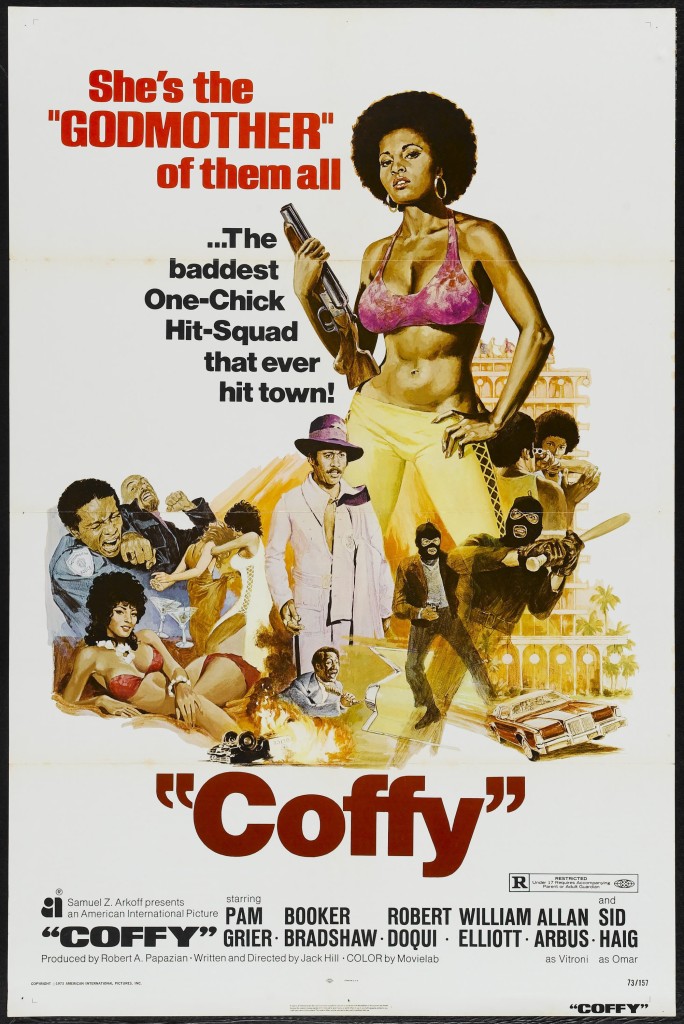 After years of small roles in exploitation flicks, Pam Grier finally hit it big with the blaxploitation classic Coffy (1973). Written and directed by Jack Hill, who had directed Grier in low-budget flicks before, Coffy to modern eyes looks far less empowering than it does exploitative. Grier spends a significant amount of time in the film nude, as do almost all the actresses; they lose their shirts in fistfights faster than Bruce Lee ever did. But the film, dealing so directly as it does with corrupt politics, urban drug problems and the exploitation of women, was very much ahead of its time, so much so that, as Hill said in a DGA interview in 2011, it was a struggle to make simply because of the constant battle against racism; Grier notes in a separate interview that there were so few African-American stunt people at that time that several men and women had to be trained specifically for the film.

Pam Grier is Coffy, an emergency room nurse who has gone on a revenge spree against the drug dealers who got her young sister hooked on drugs. She’s not afraid to get down and dirty with these scumbags, then at just the right moment, grab a gun from her purse and blow their brains out. Soon she finds herself embroiled in a major problem after witnessing her good cop friend Carter (William Elliott) being beaten by a drug dealer’s henchmen. She poses as a high-class call girl and infiltrates the business of King George (Robert DoQui) to get close to the Italian mafia boss (Alan Arbus) responsible for the beating, only to discover that her supposedly good-guy boyfriend, local councilperson Howard Brunswick (Booker Bradshaw), is involved with the baddies.

Heavy on sex and violence, Coffy is also heavy on social commentary, the kind of commentary that bluntly states that drugs are an enormous problem in the inner cities because white folks can make so much money off of dealing. But most critics didn’t see anything worthwhile in the film beyond its basic ability to entertain. Even the more positive reviews were frequently critical of Grier, or rather condescending of her performance, in a way that often didn’t make any sense. Variety, for instance, called Grier a “black tart,” while the L.A. Times called her a “totally unsympathetic black chick” and complained about her fake Jamaican accent… while completely missing the part in the film where it was spelled out that the guy she was trying to lure specifically liked fake “exotic” women.

Nowadays, most regard Grier’s performance as terrific, if not outright astonishing. She shows some roughness around the edges sometimes, and those who have only seen her in, say, Jackie Brown will probably be surprised; even in the lesser films she appeared in from the 1980s on, like Fort Apache the Bronx and Above the Law, she has a much smoother, classical approach to acting. In Coffy, she’s all barely controlled rage, which is compelling but doesn’t always hide her inexperience. But she does a fantastic job as a woman so consumed with vengeance that she wears her anger… literally. Her single-minded mission isn’t reflected just in the guns hidden inside of cute stuffed animals and the razor blades in her wig, but in the cleavage-baring tops and ultra-tight dresses, which are as much part of her arsenal as that sawed-off shotgun is.

Coffy was a huge hit, ranking #1 for at least one week on its release and #12 for the year overall. A sequel was pushed through to capitalize on Coffy’s popularity, though this sequel, the infamous Foxy Brown, was more like a campy remake. Foxy Brown didn’t do as well at the box office, though through the years has become more well-known than Coffy, possibly because she has a lot of catchphrases and a cooler name in the sequel.

Coffy hasn’t aged well in a lot of ways. The constant referral to the lead’s skin color in the theme song, incidental songs and even the title seem dated and trite. The film’s insistence on using any excuse at all to show breasts is just sad — and no, Robert DoQui’s impressive cameltoe doesn’t even the playing field. Mostly, the fact that this is a formula movie, even if it’s a formula that died out decades ago, limits its effectiveness overall.

But damn, Coffy is entertaining. It’s unflinching, fast-paced, and Grier is an amazing action hero. It’s a classic of the 1970s and of the blaxploitation genre, and a definite must-see.

Coffy is available from Olive Films on Blu-ray starting June 9, 2015.

The presentation is pretty bare bones, with nothing but the film and scene selections available on the menu, though this film looks better than I’ve ever seen it. There’s lots of grain and the occasional scratch and discolored lines, especially on a sex scene that I suspect had to be restored from a lesser-quality print. The sound is great and the colors look sharp and bright. For screenshots from the Blu-ray and other tech spex, go here.