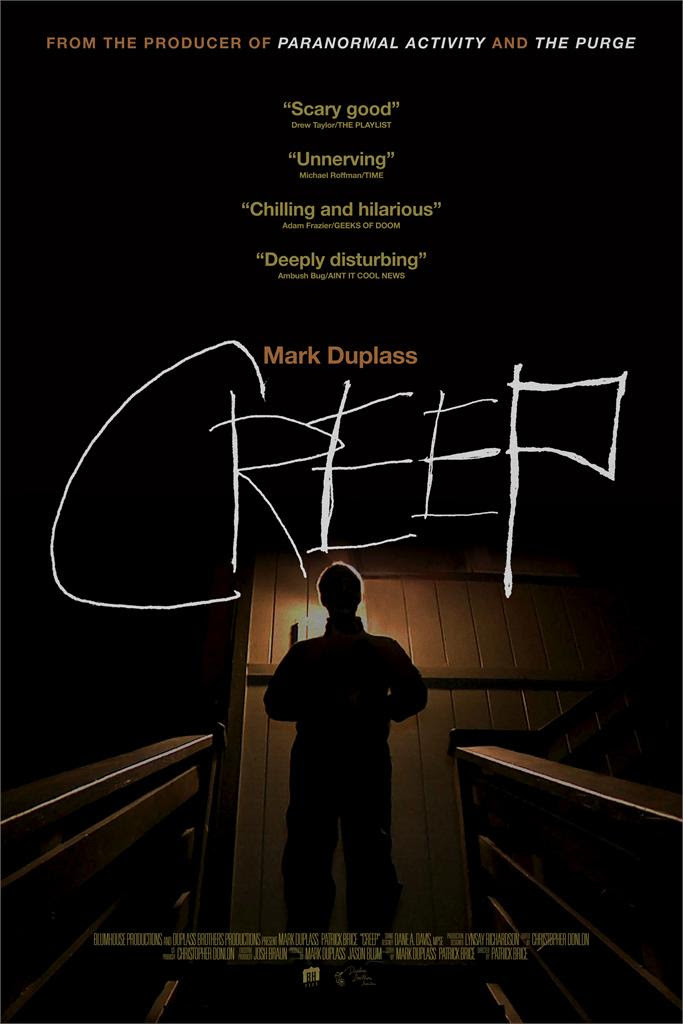 On his way to a thousand-dollar-a-day gig, young filmmaker Aaron (Patrick Brice) turns his camera on himself, perhaps out of excitement for the job, or maybe a little nervousness. His destination is a private residence: a nice vacation home near Lake Gregory, albeit an isolated one with an absent owner, some inconvenient stairs and an axe embedded into a stump that causes Aaron’s imagination to stray, if only for a moment. When Josef (Mark Duplass), the guy who hired him, arrives, it’s with a very literal bang, as he slams on Aaron’s car and hollers, because he thinks it’s kind of funny.

Josef takes poor interpersonal skills to a whole new level in Creep, a low-budget comedy-horror film written by Brice and Duplass. A heady mix of cringe comedy, psychological thriller and irreverent pokes at all your favorite modern horror tropes, Creep is one of the most unique indies of the last few years, but its pitch-black humor is not for everyone. It is, however, a rare and refreshing example of a comedy that never condescends. Creep asks its audience to trust it, to let it toy with them the way the two lone actors on screen toy with each other, and the result is well worth the discomfort.

That discomfort begins very quickly in Creep. Josef reveals early on that he’s terminally ill and has hired Aaron to do a little film about him for his unborn son, à la the treacly Michael Keaton melodrama My Life. The problems start to pile on as Josef can’t help but pull harmless little pranks on Aaron, and the touching life lessons he reveals for the camera are, in fact, bizarre psychosexual confessions.

Mark Duplass, whose writing, producing and acting credits of the last few years have established him as a major force in the independent film industry, gives one of his finest performances in Creep. Duplass has mastered the art of Resting Psycho Face, but unlike fellow master Charles Grodin, who may or may not fully realize how well his boyish face expresses subtle undercurrents of cruelty, Duplass relishes his own ability to portray the proverbial banality of evil. There is no ego that bleeds into his performance, however, but something more akin to contentment, coupled with a charming lack of pretense: Duplass is completely comfortable looking like a dork who ties his trapper hat tightly under his chin and lets the band of his underwear stick out of his exercise pants.

The found footage genre is more than played out, and Creep risks a lot by setting itself within that genre, as well as with its meta commentary on filmmaking and the performative arts. But these are minor quibbles about a fresh and daring film, a horror comedy that’s more Who’s Afraid of Virginia Woolf? than Tucker and Dale. Though accessible, it’s not always the most welcoming film, with the defiant take-it-or-leave-it attitude of mumblecore, one of the many genres the film dips its toes into.

This lack of commitment to any one style will probably irritate the purists and the impatient, but Creep, to be blunt, was not made for them. With an expertly controlled slow burn and subtle moments that don’t register until the finale, Creep is unforgettable and hilarious, a mature hybrid of a film sure to linger in your mind long after the credits roll.