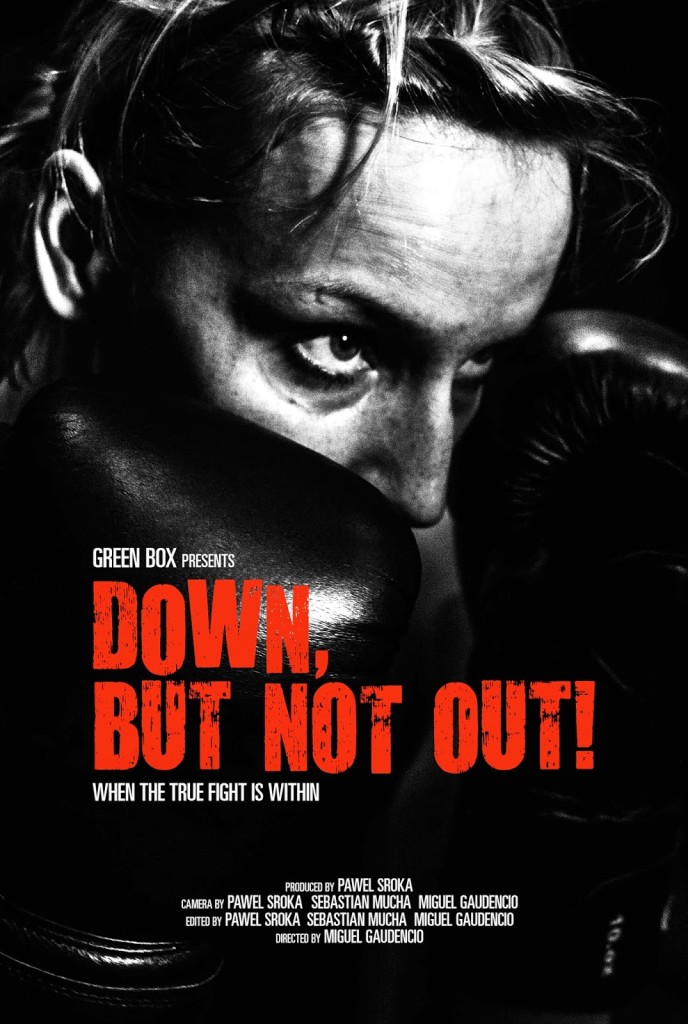 Down, But Not Out!
★★★★✫
Director: Miguel Gaudêncio
Greenbox (Official Site)
71 Minutes
Available at Vimeo On Demand

Shot in gritty black and white and unafraid of its own silence, the amateur boxing documentary Down, But Not Out! has a compelling neo-noir feel. Following a small local group of boxers to a two-day competition held at KKS Poznań, Down concentrates on the competitors to the exclusion of everything else. There are no interviews, no commentary, nobody talks to the camera. The film feels like a documentary only when someone nervously glances at the camera, or when a camera operator has to duck because they got too close to the action.

As for the boxers themselves, we’re lucky to even know their names; we’re never given any background on them and we don’t know what path they traveled to get here here, or even what they hope to accomplish. That’s not to say Down, But Not Out treads too lightly on the subject, because it doesn’t. This paring-down of extraneous information leaves just the bare bones of amateur boxing behind, creating what might be one of the purest expressions of athleticism ever shown on the big screen.

Down opens with Coach Przemek and his students, both male and female, as they travel to the competition. For whatever reason, he doesn’t bother to tell his novice boxers about the rules of a typical fight, including the referee’s terminology, until they are half-asleep on a bus headed for the match. Still, he is a supportive coach. The boxers’ commitment and camaraderie are strong, and their nerves palpable even when resting or joshing around.

The primary flaw with Down is that, as a Polish-language film, much of it is unavailable to an English-speaking audience. An official webpage claims the film is 100 minutes and focuses on boxing as “alternative therapy for people of diverse backgrounds,” but that doesn’t fully describe the documentary that is now showing on video-on-demand. The English subtitled version available at this time clocks in at just over an hour, and there are long stretches without subtitles, making the film difficult to follow.

Ostensibly focused on four female boxers — Daria, Alicja, Ana and Agnieszka — the film in actuality features all of the amateur boxers in the group, and for the first half of the film follows the men’s boxing competitions. There are moments where the film feels a little like a commercial documentary for a sports club, but those moments are fleeting. Overall, the film is a fantastic behind-the-scenes look at the kind of sports we in the United States rarely see, except very late at night as filler in between the infomercials. It’s fascinating and even strangely inspirational, despite the deliberate lack of information we’re privy to. For sports aficionados and casual fans alike, Down, But Not Out! is a must-see.