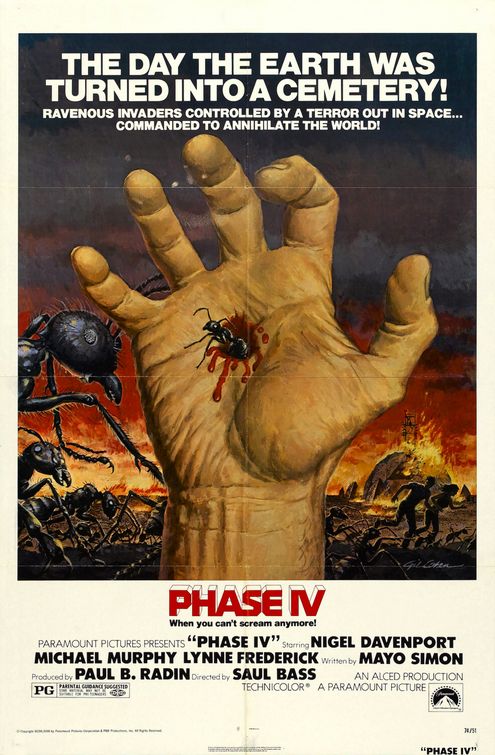 After a bizarre-yet-vague cosmic event, ants all across the globe have begun to act strangely. Biologist Dr. Ernest Hubbs (Nigel Davenport) and analyst James Lesko (Michael Murphy) travel to a mostly abandoned Arizona town, where all species of which appear to be working together, creating geometric patterns in crop fields and building enormous ant towers. Swarms of ants have killed animals and most of the humans in the area have left. Forcing the evacuation of the remaining residents, Hubbs plans to observe the ants as Lesko “listens” to them by analyzing their noises and travel patterns, looking for patterns. After they finish their study, they plan to exterminate the ants with a yellow, goopy insecticide.

But the ants don’t come out for weeks, so Hubbs, having never seen a horror film before, decides to speed things along by bombing the ant towers in order to upset the little creatures. It works. They begin to swarm, and a single local farming family who hadn’t left are wiped out, not by the ants but by the yellow goop. Only a young woman named Kendra (Lynne Frederick) remains, and she stays with the scientists inside their geodesic dome. Their car has been deliberately disabled by the ants and their HVAC system is next to go, threatening their survival. Hubbs as also been bitten by the ants and is showing signs of dementia. Their only chance of survival is if Lesko comes up with a way to possibly communicate with this new breed of hyper-intelligent ant.

Phase IV (1974) was the first and only feature film directed by legendary design artist Saul Bass. Released at the height of the nature- and animal-based disaster film craze, Phase IV was also, according to Chapman and Cull in Projecting Tomorrow: Science Fiction and Popular Cinema, the result of the popularity of the documentary The Hellstrom Chronicle (1971).

Cinematographer Ken Middleham was responsible for the astonishing photography on both films. His macro-cinematography gets us up close to the ants in a way that is still, forty years on, fascinating and impressive, but not for the feint of heart. Not only ants are shown in extreme close-up but preying mantises and tarantulas, too, and a few hundred of these adorable little ants are killed in gruesome, oozing slo-mo, so there’s a lot to upset both ant lovers and ant haters alike.

Still, there is one ant, a little beige lady who has apparently been fed some green tinted corn syrup to give her thorax a gorgeous gem-like quality, who is an absolute star. She’s perky, adorable, spunky, and probably played by about 17 different ants because, as a certified ant-ologist (translation: I once owned an ant farm) I can’t imagine they could hold up under the strain and handling required for filming.

Phase IV is a slow, moody kind of film, with a decidedly trippy early 70s aesthetic and a synth music score that anticipates the indie horror trend just around the corner. There’s an environmental feel to it, but it’s less cloying than the usual science fiction environmental stories. At previews, some in the audience said they felt the film had a “foreign feel,” though this was apparently not a positive thing; at around the same time, Bass told a friend that the film, after countless delays and re-editing by Yablans, had only been released in 40 theaters in New York City and “was not doing well.” [1]

That was a bit of an understatement. The film was barely released, and while critics seemed to generally approve, there was so little publicity and effort put into the film by the studio that it had no chance at success. To add to the problems, the original finale, an acid-trip style series of ambiguous images, sort of a cross between Stalker and 2001: A Space Odyssey, was edited down to a quick theatrical finale. The original ending was found a few years ago and can be seen here, and while many seem to enjoy it, the metaphors are clumsy and heavy-handed.

A lack of nuance was always Phase IV‘s major flaw. The tropes fly off the screen so fast you can’t dodge them: fear of science, fear of nature, a scientist who doesn’t care about human beings as much as he cares about science, the emotional female, the younger generation clashing with the older generation, and on and on and on. Davenport gives a solid if Quatermass-esque performance, while Murphy is too bland to make as much impact as he should — he’s a character actor who has gotten far better with age — and Frederick was young and inexperienced, though compelling. The film is atmospheric and entertaining, but between its plodding pace and reliance on tired tropes, it’s a self-limiting prospect all around.

Phase IV has been recently released by Olive Films on DVD. It’s a bare-bones DVD with just Scenes and Play options. The ending is not the lost ending but the original theatrical one. Film quality ranges from fair to excellent. There are some screen grabs here at Blu-ray.com for your perusal. The quality of the film seems to be determined by the quality of the original film used; several times, the standard shot/reverse shot scene will go from a grainy and fuzzy Nigel Davenport to a clear and well-defined Michael Murphy.