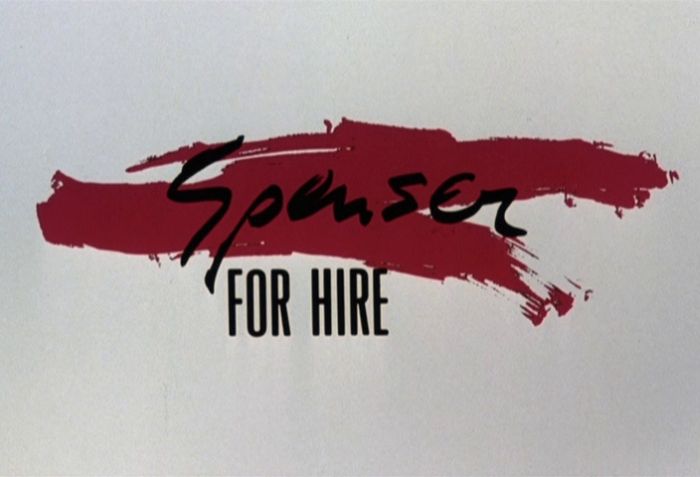 After years languishing in greymarket DVDs, the 1980s private detective series Spenser: For Hire finally got an official release from Warner Archive in 2014. Just a few weeks ago, Warner released Spenser: For Hire: The Complete Second Season on DVD, with the third season surely arriving soon.

Featuring Robert Urich as the titular detective, Spenser: For Hire was based on the novels by Robert B. Parker. Fans of the novels often weren’t fans of the show, primarily because a one-hour episode couldn’t even begin to cover the kind of detail and nuance a full-length novel could. Still, the character of Spenser on screen was a compelling one: a former police officer turned private eye who enjoys cooking and literature and boxing in his spare time, and who comes to the aid of people that would frequently fall through the cracks of the system. In a genre where tough-talking, hard-drinking womanizers with iffy pasts reigned, Spenser was a breath of fresh air. But the show didn’t feature as many wet, neon-lit streets as the public wanted — nay, demanded — in the 1980s, and the show only lasted three seasons. 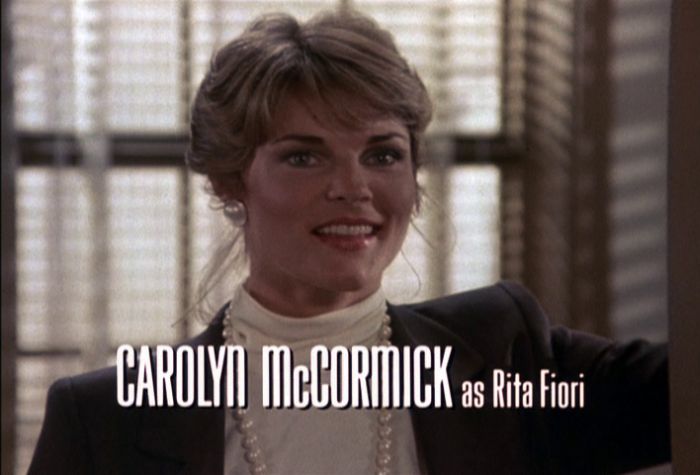 The second season is arguably the best, though the credits reveal a big, and still controversial, cast change: the addition of Carolyn McCormick as Rita Fiore, a new assistant district attorney. Gone is Susan Silverman (Barbara Stock) from the first season, at least for now. Also gone is the old fire station Spenser had for an apartment last season; the building was reclaimed by the BFD, so he relocated to Charlestown, near the Bunker Hill Monument. 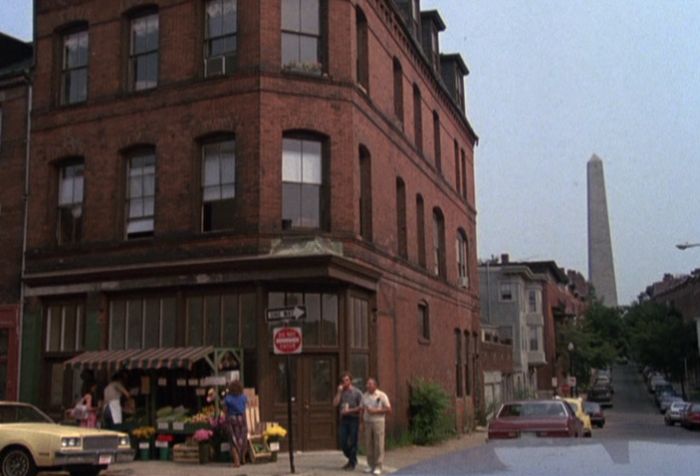 In the first episode of Season One, “An Eye for an Eye,” we find Spenser in trouble thanks to a blackmailer having somehow gotten access to his case files, and who is now trying to squeeze money out of Spenser’s friends and clients. It’s bad enough when the cops get a complaint about him, even worse when a gangster (Charles Kimbrough) pays the blackmailer $25,000.00, thinking it went to Spenser himself. It didn’t. 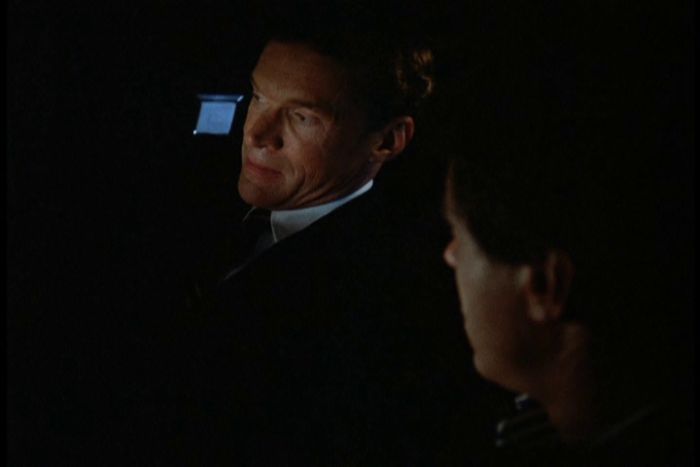 The cinematography on Spenser was sometimes pretty bold for a weeknight television show.

This episode provides plenty of chances for Spenser to be both (mildly) intellectual and a white knight, especially when former client Nancy (Marg Helgenberger) finds herself in serious jeopardy thanks to the mysterious blackmailer. There’s a solid car chase scene, a cop in a mint green jacket who kills a bad guy, and a scene where Hawk uses a man to break down Spenser’s door, greeting the private detective with a particularly nice iteration of his iconic, “Spen-saaaaah.”

You really can’t ask for more. 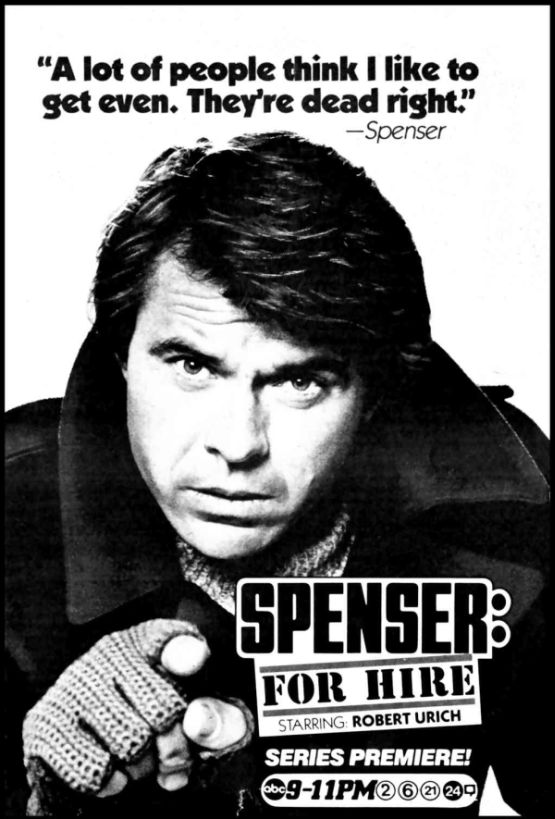 “An Eye for an Eye” was actually the second episode shot for the series, but was shown first, for reasons no one has bothered to preserve for posterity. The first episode filmed was “Widow’s Walk,” where Spenser heads out of town to get over Susan dumping him. To be brutally honest, this may have been a story that needed to be told for the sake of the series, but it wasn’t the best way to open the season. Set outside of Boston, the town that gives Spenser much of its charm, and with a truly maudlin opening narration, “Widow’s Walk” is kind of a downer, but at least it’s a downer in that overwrought, romantic style so popular with 1980s male-oriented television shows.

The rest of the series tends toward grittier fare with less romantic complications, which I prefer nowadays, though I know some fans at the time really missed; the spaghetti scene in the pilot episode last season was really terrific, but once the character of Spenser was established, the show could branch out into other topics, like vaguely evil businessmen doing very naughty things. 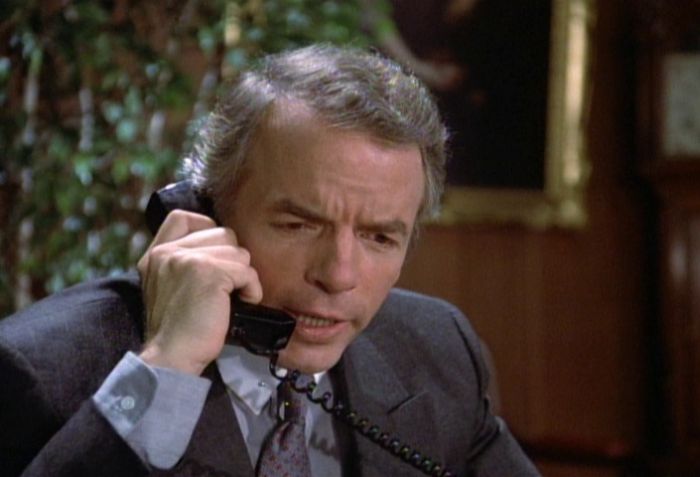 Ladies and gentlmen, I’d like to introduce you to the twelfth episode of Spenser’s second season, and what was my first sighting of one of SBBN’s best pretend boyfriends: Spalding Gray.

The episode “I Confess” features a smorgasbord of fine character actors, including James Murtaugh, who is essentially the star, as well as Paul Calderon, Marita Geraghty and Jon Korkes, and of course Spalding Gray as a “special guest star.” I didn’t remember this episode well, having not seen it since it originally aired, but I did remember that a businessman is killed in the very opening scenes without even having a line of dialogue, so I went into this hoping that businessman was Spalding and that he had been “Police Squadded” right out of the gate. Instead, another actor, uncredited as far as I can tell, was knocked off, while Gray plays a somewhat mysterious businessman involved in the sinisters doin’s and goin’s on. He’s not too great at the line readings, but a scene from a distance where he’s pissed off at a henchman is pure entertainment gold. 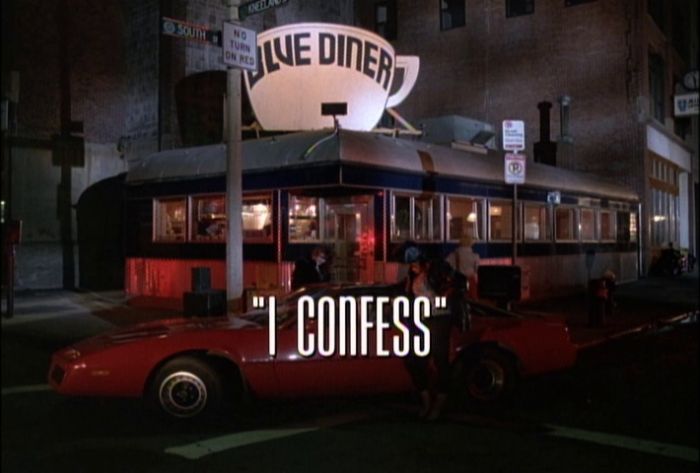 In “I Confess,” Morton Fuller (Murtaugh) witnesses a murder and, knowing the murderers have seen him, confesses to the crime himself. Spenser is hired to try to figure out what Morton’s motive for his confession is — it’s not what you think — and find the real killers. It’s very much an Equalizer kind of plot, and critics at the time frequently said Spenser never brought anything new to the genre. That’s not strictly true; though the basics of the plot lines were often pretty standard, there were character developments and plot twists that made Spenser interesting. And, of course, there were Spenser and Hawk themselves, well worth watching in any situation. 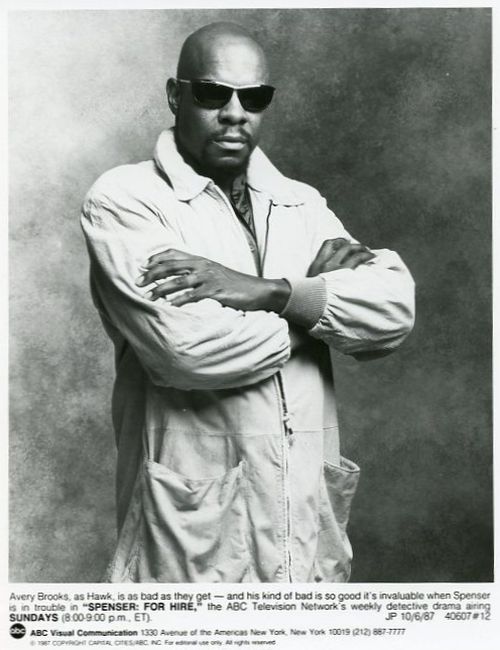 It’s not that Avery Brooks’ character isn’t fantastic, because Hawk is one of the best things about the show. He never quite entered the cultural zeitgeist to the extent he probably should have, likely because his later stint on Star Trek: Deep Space Nine made him more famous than Spenser: For Hire ever did, but those who remember show know how well-regarded Hawk was as both a character and in terms of Brooks’ performance.

That said, the 1980s weren’t always progressive in terms of characters of color, and the Spenser tagline for the second season, surely original to ABC’s advertising, perfectly illustrates this: Spenser & Hawk. Knights. Light & Dark.

ABC played up the character of Hawk in its second season advertising because he was so popular with audiences, but they still referred to him as having his own kind of ethics or as being “bad,” and not entirely admiringly. 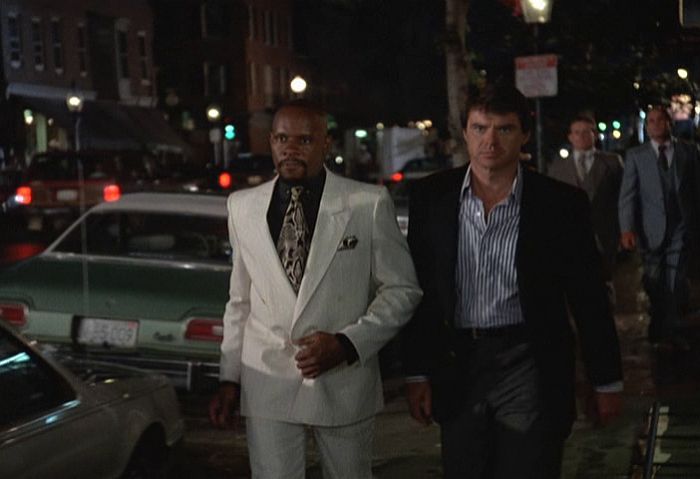 Hawk is seen as someone you never know if you can trust in large part because of his skin color, which also serves as making him the “dark half” of Spenser, the guy willing to do illegal things for the greater good. That’s not to say the show is problematic because, for the most part, it isn’t — a racist comment by a henchman in the first episode results in the guy getting punched right out, for instance — but that tagline, still used by Warner Archive on this set, is probably something best left back in the 1980s.

This Warner Archive set is MOD DVD, containing all 22 episodes of Season Two. Episodes are on five discs, with four episodes per, and five per on the final two discs. Each Spenser is complete and even comes with the opening 30-second snippets of coming events intact. Our “Tonight… on Spenser: For Hire” announcer doesn’t sound like Ernie Anderson, though it might be; whoever it is, it’s someone those of us of a certain age will recognize from weeknight television shows on ABC.