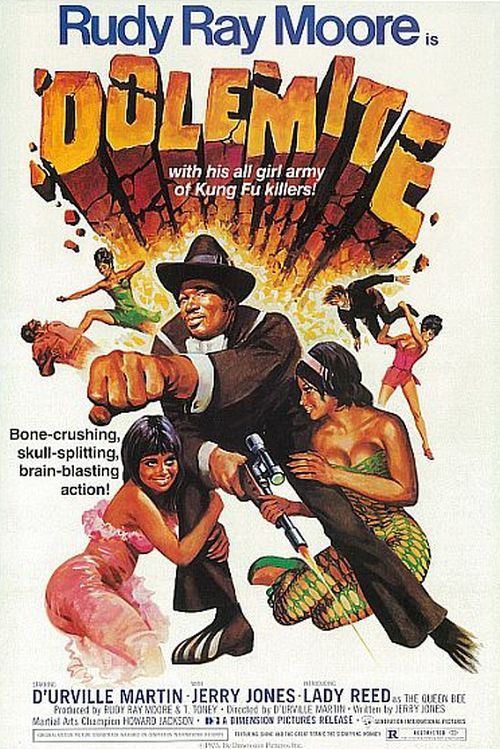 “Dolemite is my name and fuckin’ up motherfuckers is my game.”

In the early 1970s, after years of performing in the underground comedy circuit, Rudy Ray Moore hit the big time with a series of comedy albums about an unlikely urban superhero named Dolemite. Reportedly, a junkie named Rico in the early 1970s invented tall tales about an urban superhero, and Moore would pay Rico to hear more of these stories, which he turned into a popular stage act. With fame came money, as it always does, and in 1974, Moore rustled up about $90,000 and made a film about the superpimp. He ran out of money so quickly that he had to stop production and go out on tour for over a year before raising enough cash to finish the movie. [1]

The result is the blaxploitation classic Dolemite, one of the few truly terrible movies that is endearing and fun enough to be watchable. The plot is solid, as B-movie fare goes: Even though Dolemite (Moore) was sent up the river a couple years prior for a drug rap, the drug problem in his neighborhood has actually gotten worse, and authorities realize that the man they convicted wasn’t the drug dealer they thought he was. They set him free with the understanding that he will go out and find the real source of the drugs and gang warfare in his community, and he knows exactly who that is: his pimp rival Willie Green (played by director D’Urville Martin).

The devil, as always, is in the details, and that’s where Dolemite really starts to shine as a fantastic, terrible film. Two feet outside the prison gate, Dolemite strips right down to his tighty whiteys and changes into a pimp suit. 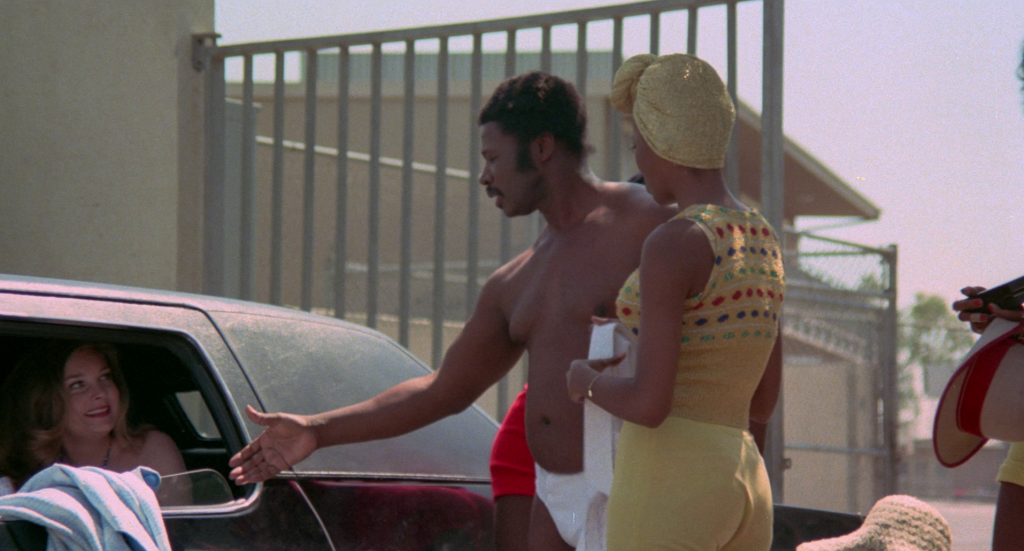 The site of a mostly-nude Dolemite gives the prison guards feelings they can’t understand. 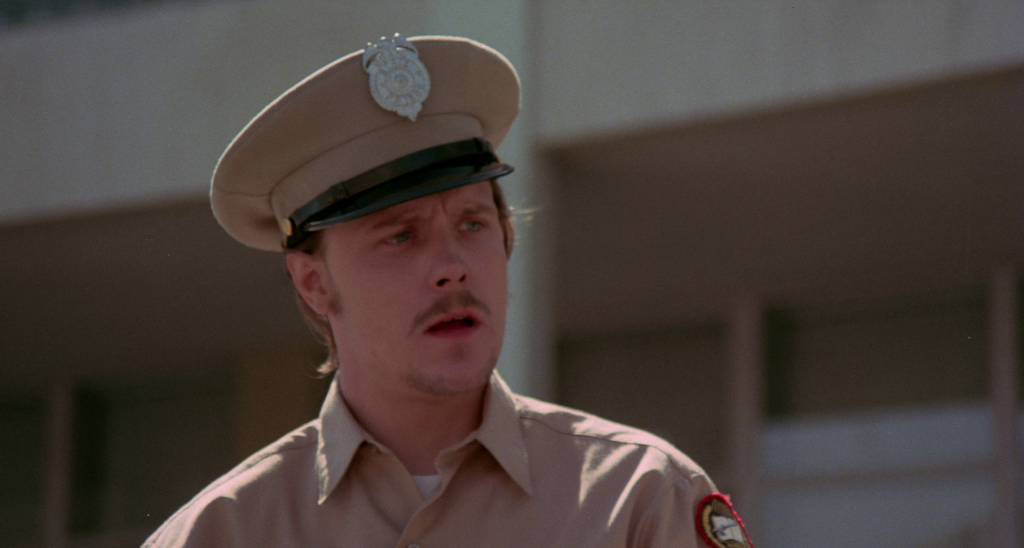 Doley is a pimp whose wardrobe trends toward little sailor boy couture, and all his bitches (“You forgot about the white ones”) are trained in the solemn art of kung fu. He’s quick to hurl long, clumsy strings of invective and is unusually concerned with his enemies’ insecurities. A lot of women sit around naked and are slapped in the face in Dolemite, and there are some pretty heinous sex scenes that I hope people got paid well for, though I know in my heart that they didn’t.

There are some character actors here you’ll recognize, such as Jerry Jones, who also helped write the film. Hy Pyke as the mayor will be recognizable, if for nothing else than his small role as the bar owner in Blade Runner, and corrupt cop Mitchell (not to be confused with Mitchell!) is played by John Kerry, a character actor who’s still working today. 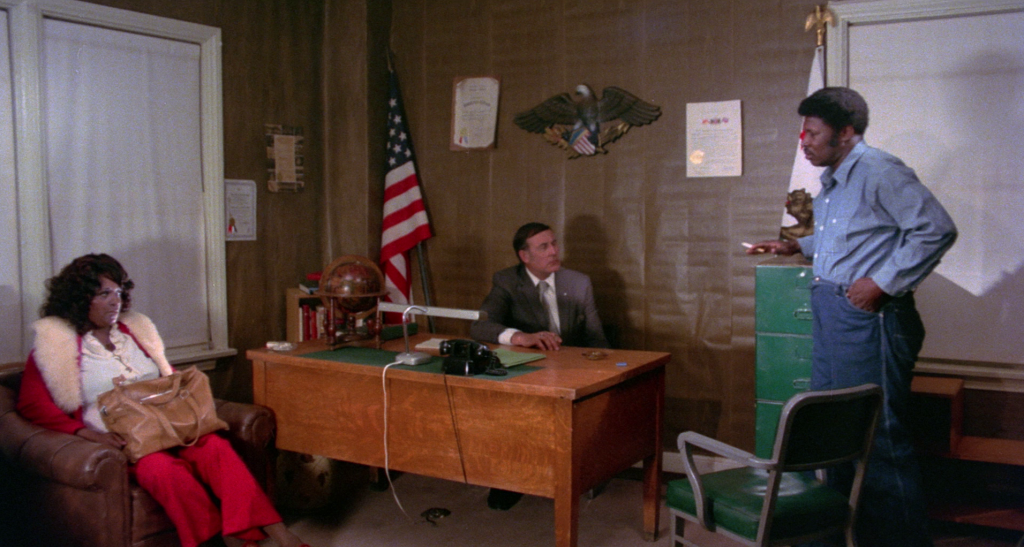 Otherwise, most of the actors are amateurs, folks who also appeared in small parts in the sequel, The Human Tornado, as well as Disco Godfather, both of which starred Moore, but these folks usually weren’t in much else. The rest of the cast is populated not by amateurs, but random ladies and dudes taken off the street and sorta-kinda given some things to say. Every so often someone in one of these throwaway parts does something noteworthy, like the poor man playing one of Willie’s henchman in a car early in the film. He’s actually good, but they hid him in the back seat of one of those 1970s boatmobiles and stuck a bad Fu Manchu on his upper lip, then killed him off. 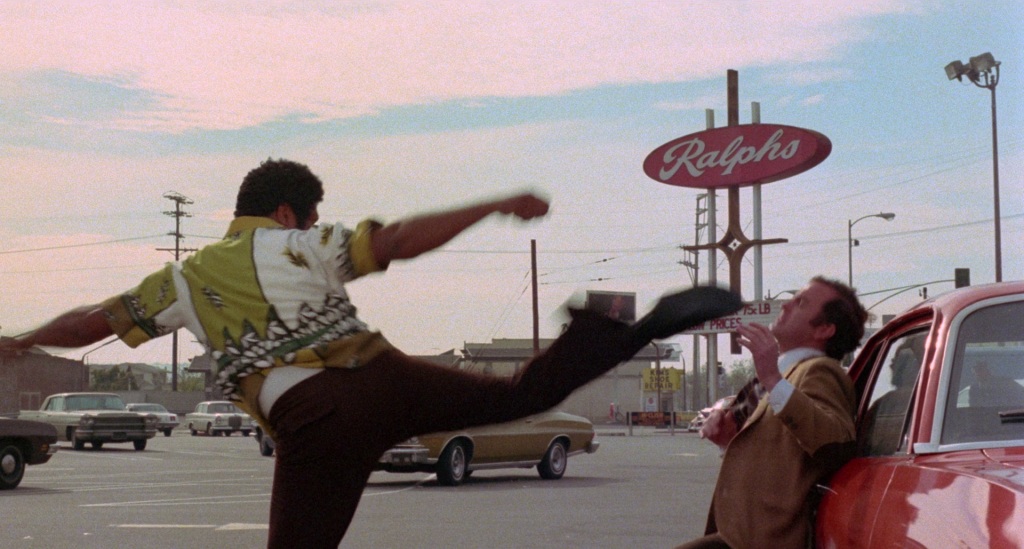 Most of the punches and kicks are unconvincing. This is one of the better ones.

On the so-bad-it’s-good front, I have to be Captain Buzzkill here and note that, once again, much of the badness everyone loves about a bad film is artificial. There are constant complaints about the boom mics in Dolemite, for instance, and apparently no one realized that they were mostly visible because an open matte print of the film was used for an old VHS release and cable movie showings. When in the proper aspect ratio, many of the boom mic issues disappear, as do some crew mishaps and almost all of the strange items blocking the view.  The sound on this newly remastered version from Vinegar Syndrome is quite good, too, and though nothing can be done to fix some of the more egregiously bad overdubs, much of the mumbling has disappeared. 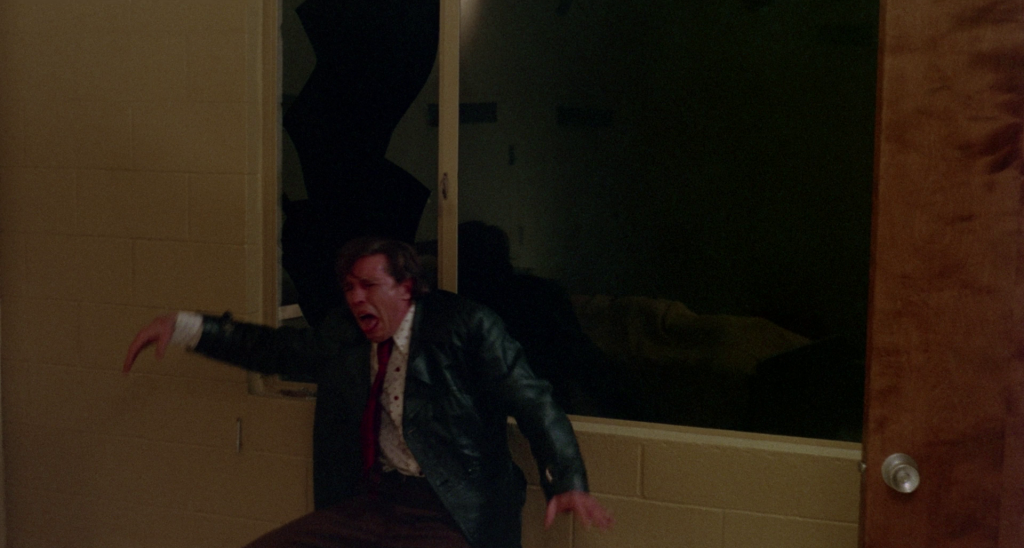 My favorite part of Dolemite is how everyone overreacts when they get punched or shot.

What’s still here in the restored version — you can watch the “Boom Mic” version on the Vinegar Syndrome release, if you’d rather — are the flubbed lines, the obvious mid-scene replacement actors, shadows from crew members, people just staring right at the camera and giggling, and at least one moment where I swear a crew member with a script almost walks through a door, realizes they’re filming, then backs out, without anyone noticing what has just happened.

You also get to see new mistakes you probably missed before, like the sublime Hamburger Pimp’s t-shirt, which is an inside-out and backwards Dolemite shirt at first, then turns into a “Pimpin’ Sam” shirt in the middle of a scene, though it’s still inside-out and backwards, so I’m sure the continuity guy [2] thought it would go unnoticed. The Hamburger Pimp is a hapless sidekick with a clumsy walk and his own theme music, by the way. He’s basically the Torgo of Dolemite, and everybody loves him. 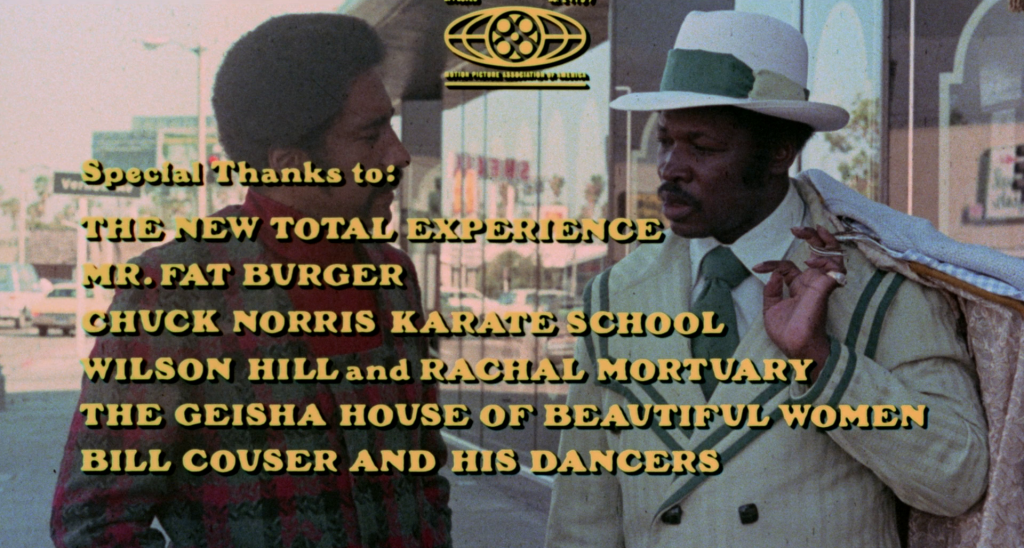 Why doesn’t anyone ever mention that the scenes of the hookers in Daisy Dukes learning karate were shot at Chuck Norris’ karate school?

Another bonus in the restored version are all the clear, glossy, beautiful views of the big-ass cars that everyone drives. Watch closely: the Nevada license plate (with the “ada” taped over the state because something-something-reasons) is reused on at least three cars, probably more. 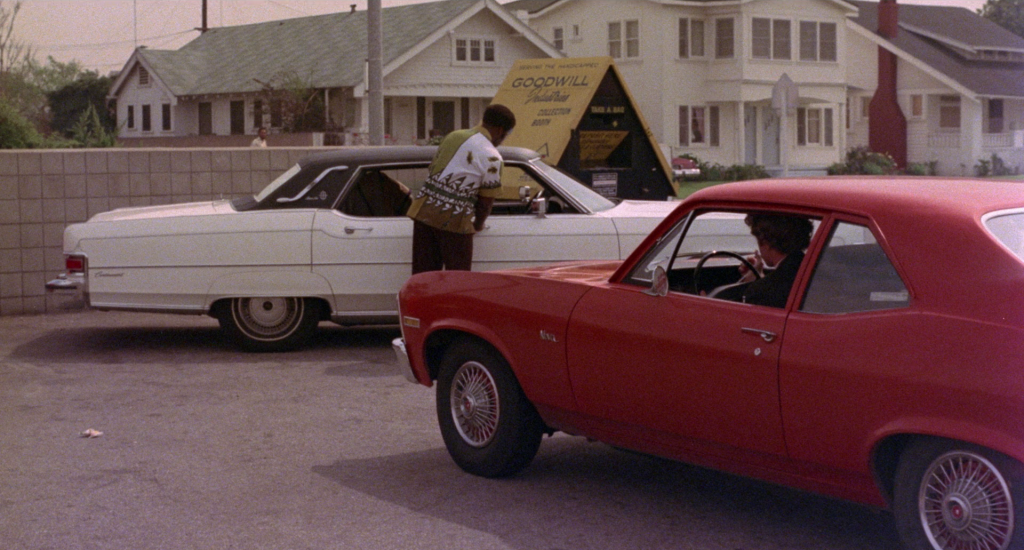 This is a pointless screencap, really. I just miss my old Chevy Nova.

Vinegar Syndrome has restored Dolemite in 2K from a 35mm negative, and is now offering the film in a DVD/Blu-ray combo pack. You can watch it in its 1.85:1 original version of the full frame “Boom Mic” version. Included are extras such as a making-of documentary, a featurette on Lady Reed, a short (less than two minute) then-and-now featurette with locations used in shooting, theatrical trailers, and a commentary track by Mark Jason Murray, author of Moore’s biography. It’s got everything you want, whether you’re someone like me who likes to see these bad movies in their original format, or if you want a classic beer-and-popcorn bad movie experience with extra boom mics and crew members.
—
Sources:
[1] Black Comedians on Black Comedy: How African-Americans Taught Us to Laugh, Darryl Littleton
[2] Let’s just pretend there was a continuity guy, okay?
All screenshots are from the original DVD or Blu-ray. While they accurately represent the quality of the film, some compression of the image may have occurred when formatting these screenshots for this article.