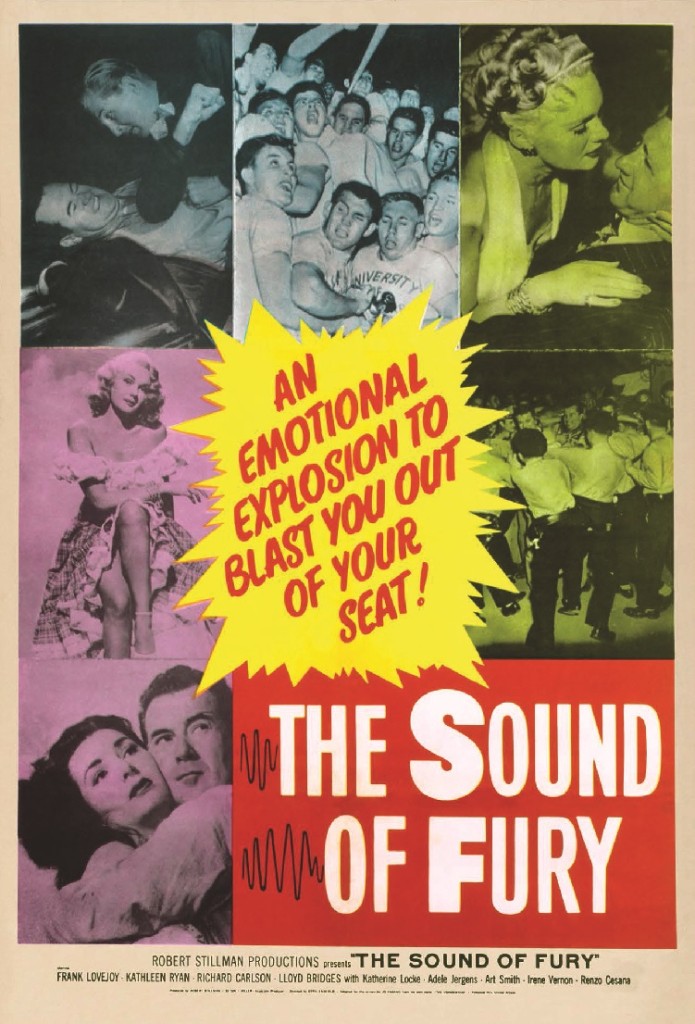 Family man Howard Tyler (Frank Lovejoy) is down on his luck and about to make some very bad decisions in the 1950 film noir Try and Get Me!, one of a series of low-budget social consciousness films directed by Cy Endfield. After another fruitless day searching for work, Howard’s wife Judy (Kathleen Ryan) becomes understandably upset at the situation. Howard doesn’t see it as understandable, though, but as another example of how greedy dames can be. He storms off to have a beer at the local bowling alley, where the handsome Jerry (Lloyd Bridges) catches his eye. 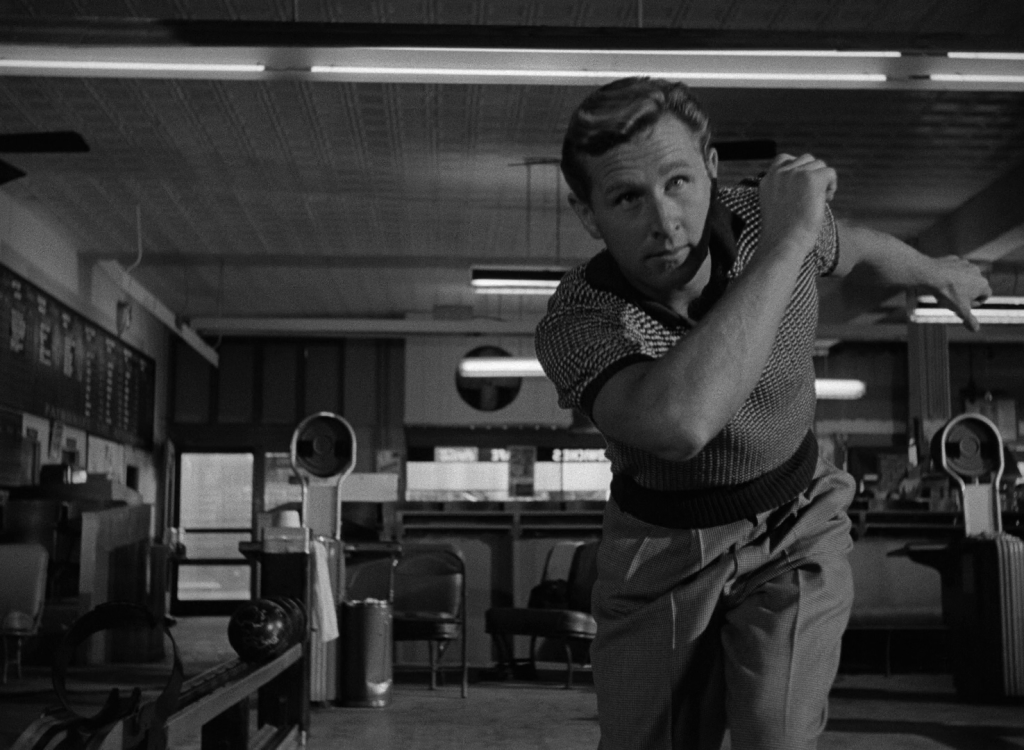 The first thing Howard notices about Jerry is his wiggling ass, and a few minutes later he’s in Jerry’s apartment, where his ass wiggling is now accompanied by rampant shirtlessness. Soon Jerry and Howard are commiserating about how women don’t love nothin’ but money, but Jerry’s got a money-making opportunity for Howard and asks him to be partners. 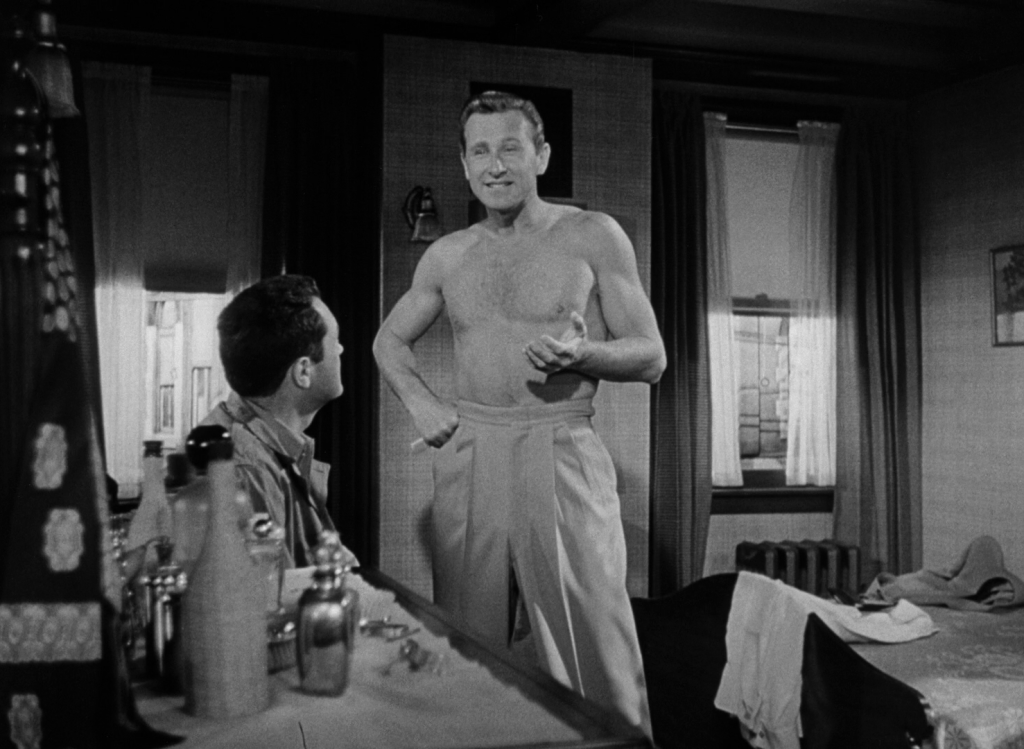 Jerry is less offering a job to Howard than he is seducing him, and in a very pragmatic, do-you-want-it-or-don’t-ya manner suggestive of a hook-up rather than a romance. It’s all metaphorical, of course, but everything about their interactions, from Jerry’s constant preening to Howard’s habit of talking with his mouth full, cranks the usual film noir homoeroticism up to 11.

Jerry is a homme fatale, and just as the sexiness in a femme fatale is ramped up right before things start to go south in a film noir, the hot beefcake action in Try and Get Me signals trouble ahead.[1] Howard is the dupe, the stooge, the guy who doesn’t know what he’s getting into until it’s too late.

And what he’s getting into is working as the driver of the getaway car as Jerry terrorizes the town of Santa Sierra in a series of robberies. “You nervous?” Jerry asks Howard on their first job. “So was I the first time.”

Written by Jo Pagano and based on his pulp novel The Condemned, Try and Get Me is based on the sensational 1933 case of the kidnapping of Brooke Hart. The handsome son of a millionaire, Hart was kidnapped and murdered by two men who later contacted his family, demanding $40,000 for a release they knew could never happen. By the time the men were caught, the public had been whipped into such a frenzy that a huge mob descended on the jail, took the prisoners, tore their clothes off and hung them in a tree across the street. California Governor James Rolph praised the mob, which caused outrage in the rest of the country.

Pagano had changed the story to reflect a modern post-war sensibility, tackling more than just yellow journalism but issues such as the difficulty of WWII veterans to find jobs and the hypocritical push toward creating an outwardly prosperous but internally oppressive society, at the price of individuality and freedom. Director Cy Endfield, who had made a series of low-budget social consciousness films, would take Pagano’s story and distill it down to the essentials, creating a gritty, visceral, powerful piece of filmmaking. 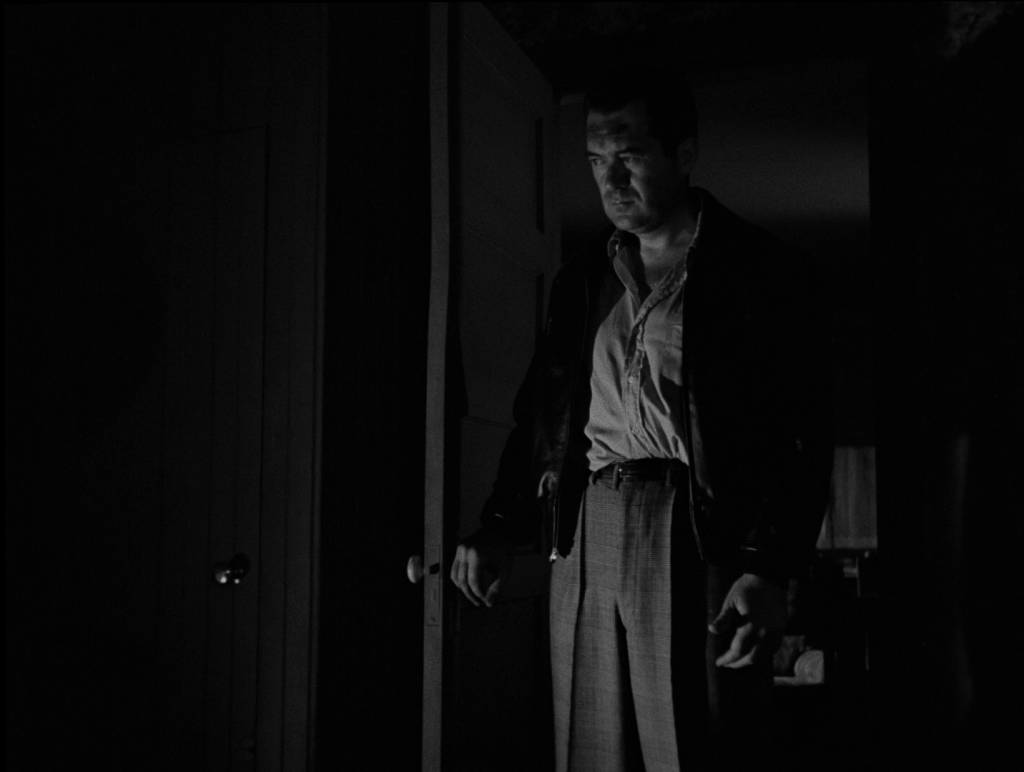 It was powerful enough, in fact, that it would result in Endfield being called before the House Un-American Activities Committee; his refusal to name names would lead to his blacklisting. He moved to Britain and directed a few films under pseudonyms, then  eventually found success with action films like Zulu (1964) and The Sands of the Kalahari (1965).[2]

Lloyd Bridges also came to the attention of HUAC, though for decades the extent of his cooperation — or whether there was any cooperation at all — has been unknown. He had originally been named by Lee J. Cobb who, reportedly on the advice of his attorney, was naming names HUAC already had, which would allow him to be seen as a friendly witness while not actually providing HUAC with new information.[3] Bridges, who had retained the same lawyer Cobb had, attempted to do the same, though sources over the years have stated Bridges revealed new names to the committee.[4] [5] Yet at least one article claims Bridges named only one person: himself. 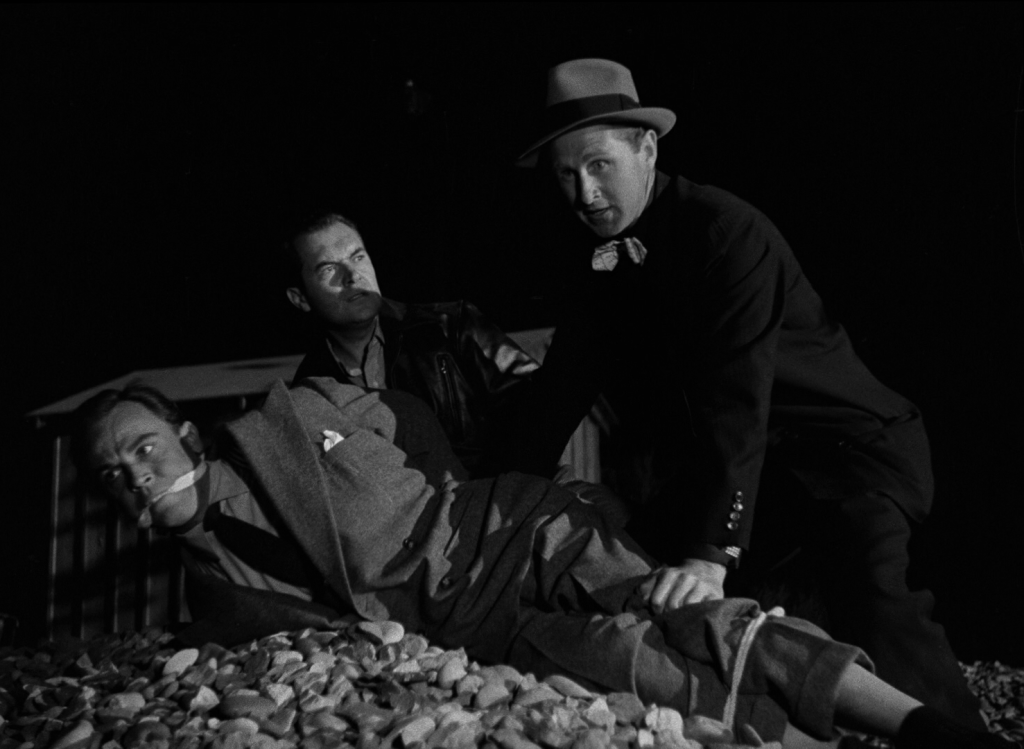 The slick, sharp-dressed Jerry is an easy comparison to reporter Gil Stanton (Richard Carlson), who is less flashy but just as smooth and impressive. His reporting on Jerry’s and Howard’s crime spree speculates that there are dozens of professional, armed robbers terrorizing the town; when Jerry and Howard move on to kidnapping, the public is already primed to be both terrified and viciously angry.

One of the best scenes in the film seems to come out of nowhere at first. It’s Gil and his lovely wife Helen (Irene Vernon) at their fabulously appointed mid-century modern home, serving co-workers and guests a fashionable dinner of lamb and mint jelly out on their patio and making small talk about Bridge. Gil discusses his reporting of the robberies, satisfied that he’s only informing the public, even though visiting psychologist Dr. Simone (Renzo Cesana) worries that the exaggerations are actually harming the public Gil claims to care so much about.

It’s all polite conversation at this point, but later, when Jerry and Howard hook up with a couple of hotsie-totsies to help bolster their alibi after the kidnapping, do we see a sharp comparison between the lives of the haves — in this case, the middle class — and the have-nots. It’s a critique of the American way of life, of course, turning the classic nuclear family into a parody. The two girls specifically parody the guests at Gil’s barbecue-and-cocktails party, and Hazel (Katherine Locke), the girl Howard pairs up with, is outwardly a typical film noir moll, but with the kind of virtues one would expect in a wife. Contrast that with Judy, who is seen (mostly inaccurately) by her husband as being the kind of girl who just wants some nice shoes; the roles of mistress and wife have been reversed. 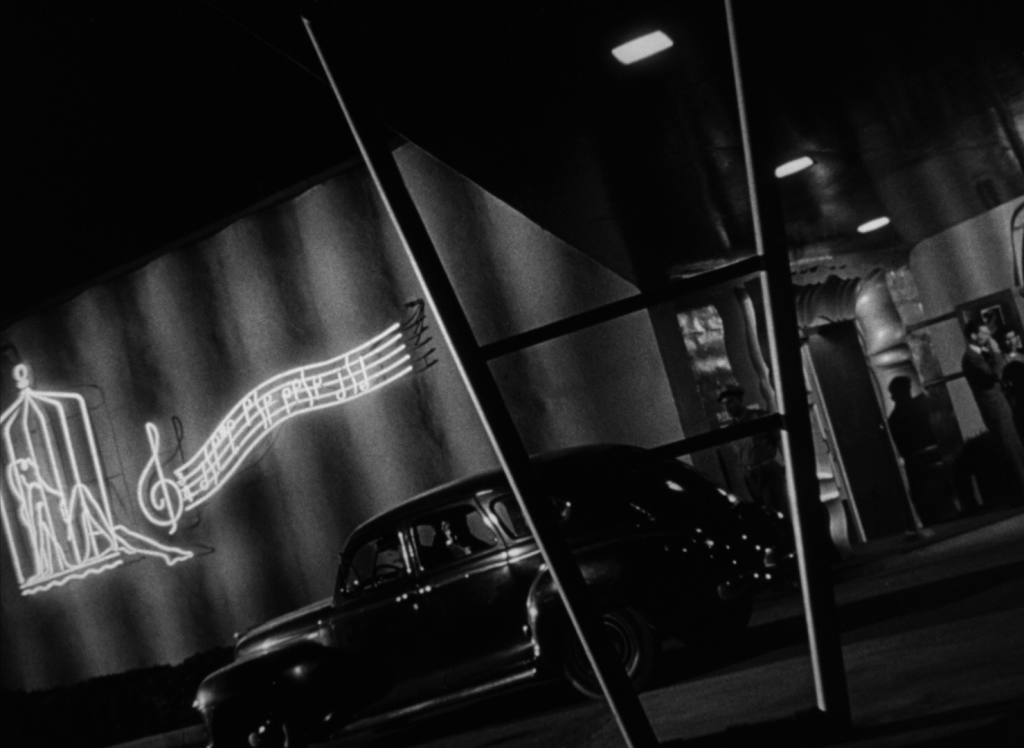 Hazel and her tall blonde pal Velma (Adele Jergens) are a pair, one of several couples in the film. None of these couplings are successful, with the possible exception of Gil and Helen, and if their pairing is successful it’s only because of Helen’s complete acquiescence to her own irrelevance outside the role of party hostess to her important husband.

The film switches this up in a nice bit of implied equality — something HUAC would have considered subversive Commie pinko scumbagishness of the highest order — by showing Velma, the girl who looks almost exactly like the prim and proper Helen, as someone who has no qualms about being a good-time party gal and who is happy to exploit the situation for attention. Hazel, meanwhile, looks like a slightly off-center Judy, but possesses a moral compass that Judy, in either a mild case of greed or a major case of naïveté, never seems to develop. Hazel’s resemblance to Howard’s wife heightens the poignancy of his eventual emotional collapse in front of her; Judy is also given the dignity of a rather private breakdown, which is greeted with sympathy from Helen and a moment of understanding from Gil. Hazel, sadly, is left to cry in the middle of a bustling City Hall, standing front of a greedy press and rubbernecking bystanders, no one there understanding or caring what she’s just been through.

United Artists worked hard to get audiences excited for the film. “An Emotional Explosion to Blast You Out of Your Seat!” shouted the colorblock poster for the December 1950 release, while trade ads promised “Boom at the boxoffice!”[6] When this and the film’s perceived anti-American message failed to get enough butts in seats, the film was re-released the following March as Try and Get Me! and Lloyd Bridges promoted as the film’s co-star.[7] That didn’t help, either.

Over the years, the film has developed a cult following from noir aficionados. Even today, over 65 years after its release, it’s still a powerful and relevant film, a sobering reminder of just how little we’ve advanced as a culture. Scandal and salaciousness still rule the media, and it’s not likely to change any time soon.

Olive Films has recently released Try and Get Me! on Blu-ray in a beautiful print that was restored in 2013 by the Film Noir Foundation.

—
Sources:
[1] Detours and Lost Highways: A Map of Neo-noir by Foster Hirsch
[2] Hide in Plain Sight: The Hollywood Blacklistees in Film and Television, 1950-2002 by Paul Buhle, Dave Wagner
[3] A Companion to Post-1945 America, edited by Jean-Christophe Agnew, Roy Rosenzweig
[4] Forbidden Animation: Censored Cartoons and Blacklisted Animators in America by Karl F. Cohen
[5] The Benefits of Hindsight: Re-Visions of HUAC and the Film and Television Industries in “The Front” and “Guilty by Suspicion” by Jeanne Hall, Film Quarterly, Vol. 54, No. 2.
[6] The Return of the Epic Film: Genre, Aesthetics and History in the 21st Century, edited by Andrew B. R. Elliot (“boxoffice” original to the ad)
[7] The Dark Side of the Screen: Film Noir by Foster Hirsch
All screenshots are from the original DVD or Blu-ray. While they accurately represent the quality of the film, some compression of the image may have occurred when formatting these screenshots for this article.