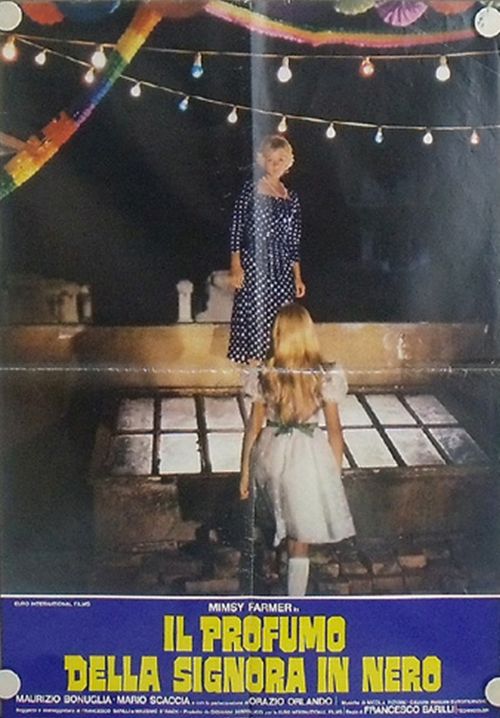 Sylvia (Mimsy Farmer) is a beautiful single woman dedicated to her job and her boyfriend Roberto (Maurizio Bonuglia), a geologist at a nearby university. After a double date with visiting professor Andy (Jho Jhenkins), where the two couples spent the evening drinking and talking about cannibal tribes in Africa, Roberto seems to become distant, while Sylvia finds herself oversleeping and frequently distracted. Soon, memories of her past come back to haunt her, and strange occurrences begin to happen around her. As the memories turn more tangible and the strange events more violent, Sylvia finds herself unable to forget her role in a terrible crime many years earlier. Is there a secret plot against her, or is she slowly losing her mind?

The Perfume of the Lady in Black, Francesco Barilli’s directorial debut, is a sumptuous, slow-paced tangle of a film, a series of beautiful and terrifying scenes connected by a barely-there plot and remorseless borrowing from several early-1960s thrillers. The film is visually overwhelming, the set designers not content to cover just walls, but boxes and random tchotchkes, too, with the most garish Victorian wallpaper money could buy. Mirrors on multiple surfaces create recursive, flowery hellscapes. Amidst this Victorian and Edwardian cacophony are art deco tiles and setpieces, which somehow manage to look older than their 1800s counterparts. 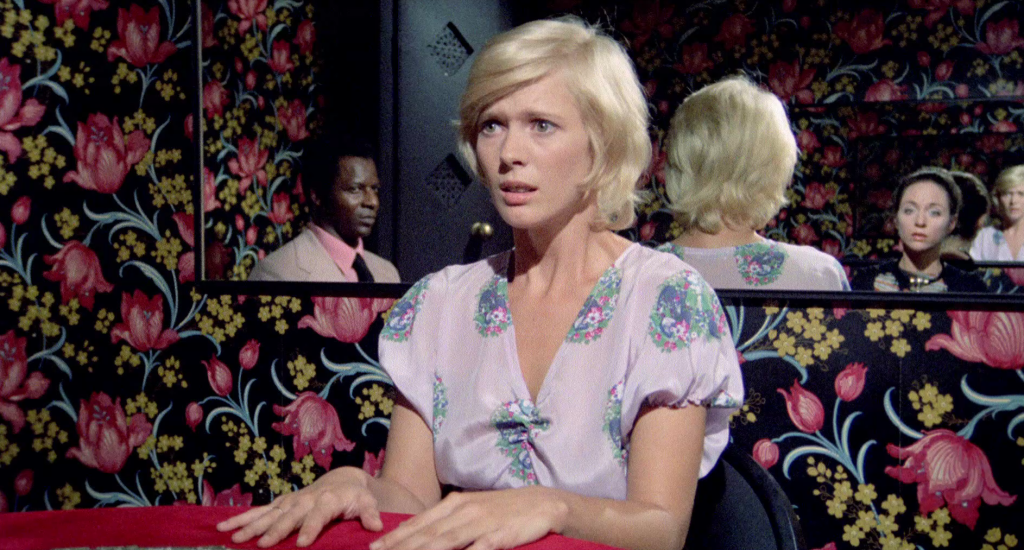 Star Mimsy Farmer had a long career guesting on TV shows and in supporting parts in B movies, including one of my favorites, Hot Rods to Hell (1967), before moving to Italy and starring in a series of gialli. Lars Nilsen has aptly noted that she personified America, though to be honest, she represented the American actress more than America as a whole. Fresh-faced, lithe and blonde, she had the kind of department store model looks producers in the United States wanted to exploit and directors in Europe wanted to defile. Hitchcock would have courted her, then tried to break her, and she would have just laughed at him.

Her performance in Perfume is lovely and understated, and she pulls off some of the ridiculously slow-paced reaction shots with aplomb. There’s an inner strength to her Sylvia that makes her one of the most sympathetic, reasonable and charming antiheroines to ever appear in a giallo. She’s composed, she’s tough, she looks like she had her reasons for everything she’s ever done, good or bad, and you’re willing to listen if she would only just talk to you about it, but of course she won’t, she’s not that kind of woman. 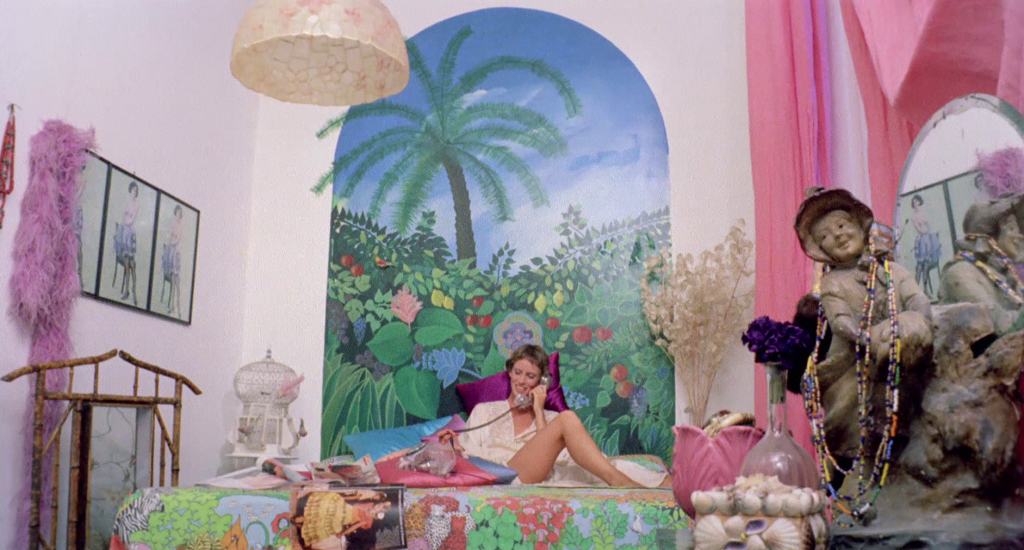 There are many who aren’t convinced of Perfume‘s giallo bona fides, and it’s easy to see why. Classic gialli seem to construct their female characters backwards; that is, they start out with the kind of woman the character “ought” to be, then craft the character as someone who, from the first frames, has not measured up to this ideal that the audience isn’t fully privy to. Sylvia certainly seems to fit that stereotype at first: she’s the head of R&D at a chemical lab, good at her job and fond of sensible pantsuits, and worst of all, unwilling to spend every night partying with her jerk boyfriend like a real woman would. But her world doesn’t crash around her when Roberto leaves. She’s disappointed, but she’s got other stuff on her mind, and one never gets the sense that she would give everything up just to win his alleged affections.

Though the easy comparisons with Polanski’s Repulsion and Rosemary’s Baby must be made, it’s also worth noting Sylvia’s lack of sexual repression in the film. She doesn’t avoid it; she actively enjoys it. The psychosexual element here has been retooled into an Electra complex that has been exacerbated by a gruesome childhood crime. Rather than revenge on a willful woman, a darker, more expansive plot is hinted at, and the finale in that regard does not disappoint. 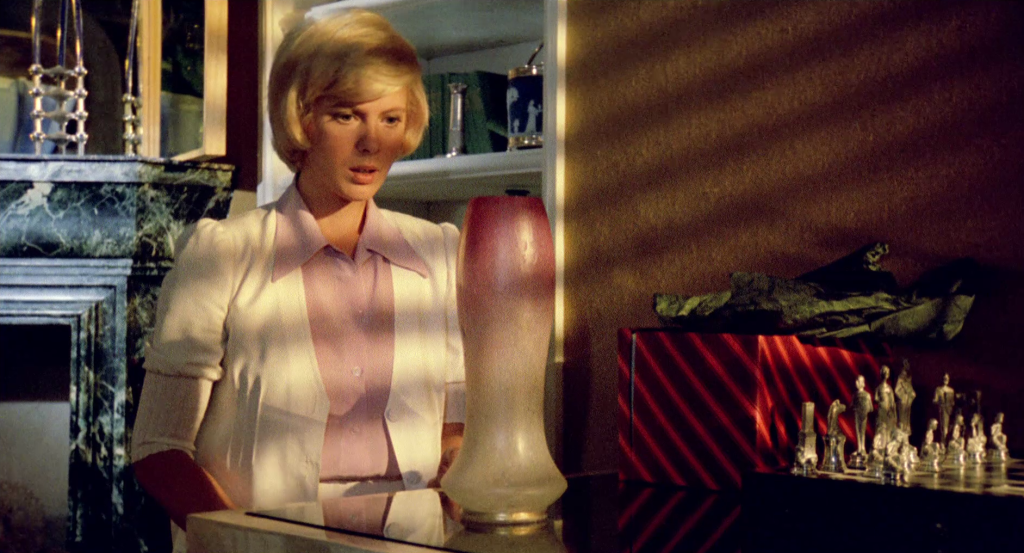 This text is not very sub.

The complaints — and there are always complaints — about Perfume seem to center on the film’s stubborn refusal to explain itself. There are long, unexplained, nearly silent scenes, plot threads that seem to end abruptly, and precious little of the sinister plot gets explained. But when you force an audience to fill in some pretty big blank spaces, you allow our goofy (yet effective) monkeybrains to start creating patterns even where none exist, except on that damnable wallpaper. Our paranoia heightened, even with the usual cinematic clues, it’s impossible to know where reality ends and Sylvia’s madness begins.

That said, the ambiguity in the film is somewhat overstated. A couple of shots of Sylvia working on what appears to be a diorama using the faces of her family go nowhere, or so it seems, until a brief moment when we discover someone else has also been cutting the heads out of Sylvia’s family photos. A grotesque childhood memory involving a lovely art deco vase doesn’t just provide a fun little Sirkian-Freudian moment, but ends up invoking the idea of literal poisoning, done in conjunction with emotional “poisoning” via manipulation. This idea of poisoning ties in with an early scene, and what at first looked like typical (and slightly racist) early 1970s B-movie pandering toward blaxploitation fans instead pieces together nicely into a plausible theory as to what has been going on in Sylvia’s life ever since childhood.

The film does take advantage of all this, however, hoping the lack of finesse in the screenplay (especially in the dialogue) can be excused away as the clumsy actions of characters who are suspicious. This bit where Roberto offhandedly praises Francesca was particularly funny to me: 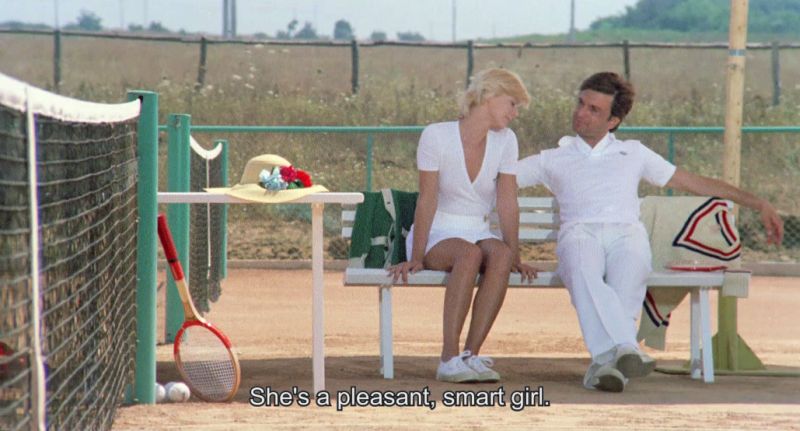 You can’t watch The Perfume of the Lady in Black without seeing elements that would later appear in films like The Brood and Suspiria and The Shining. It’s an odd, languid, beautiful, frustrating giallo that is really only held together by Farmer’s fantastic performance and the audience’s willingness to go along with the notable amount of nothing in so many of the scenes.

One of Raro Video’s first releases on DVD back in 2011, The Perfume of the Lady in Black  is now available (as of today!) on Blu-ray. Included is a small booklet with a short, uncredited essay that doesn’t make much sense, as well as two extras: an interview with Barilli and a short film of his entitled The Knight Errant.
—
All screenshots are from the original DVD or Blu-ray. While they accurately represent the quality of the film, some compression of the image may have occurred when formatting these screenshots for this article.