Poster courtesy The Wrong Side of the Art.

J.D. Dawes (Chuck Norris) has just returned to his home in California after a long-term trucking job in Alaska. His little brother Billy (Michael Augenstein) idolizes him and wants to be a truck driver, too, so J.D. lets him deliver a load of frozen foods by himself — T.V. dinners, more specifically, a fact that hilariously comes into play later on. But because this kid brother is named Billy and no good ever happened to a character named Billy in the 1970s, he gets himself involved with a bunch of scheming redneck types while driving through the town of Texas City. With Billy disappeared, maybe dead, J.D. hops into a sweet, sweet van airbrushed with a giant American eagle and heads off to Texas City to rescue his brother and exact a whole shitload of stonefaced vengeance.

One of my favorite things about Breaker! Breaker! (1977), the film that boasts the first starring role for our good pal Chuck Norris, is that it was released on April Fool’s Day, which seems both apt and kind of endearing. Breaker! Breaker! failed to launch Chuck into B-movie superstardom, which is no surprise as the production was quite obviously a fiasco; you don’t need to do anything but watch the film to know that. I mean, the director was, for some reason, the completely inexperienced Don Hulette, a silent film music composer. How did that even happen?

But if you want an eyewitness account to reassure you that, yes, Breaker! Breaker! was a complete and utter trainwreck during filming, look no further than Video Slut, the memoir written by Sharon Oreck, grip on the film. She writes that most of the men on set were right assholes, and though no names were mentioned, she described the cast as “disgusting, lecherous karate dudes” and the director as having “the worst case of unmerited, multifaceted self-confidence that I have ever seen.”

The script is no better, but at least is amusing in its incoherence. For instance, after Billy heads off in J.D.’s truck, J.D. and his buddy Burton (Jack Nance) (!) head for their favorite truck stop diner where they order the usual, which was apparently a side salad. With crackers. Next is a little light arm wrestling with the legendary The Great John L., which leads to an all-out brawl involving dudes in mesh t-shirts and tricornes. So, you know. A normal Tuesday.

People casually mention that Breaker! Breaker! is just a rip-off of Smokey and the Bandit, but that’s not true: Smokey didn’t release until nearly two months after Breaker! Breaker!  It’s also not a rip-off of Convoy, which wasn’t released until summer of ’78; the song “Convoy,” on the other hand, was out in 1975. Even earlier was the semi-popular (ha! semi!) TV series “Movin’ On,” starring Claude Akins — an actor my dad would always change the channel to, without exception, which is why I know more about Sheriff Lobo than you do — which premiered in 1974 and taught us all how to “do it like Pruitt.”

There was a whole crazy truckin’ C.B. craze in the mid 1970s, is what I’m saying here, and while Breaker! Breaker! seems to have ripped off a bit of the context from the Jan-Michael Vincent classic White Line Fever (1974), primarily in its concern with strong American values against corrupt and money-hungry fringe corporate elements, it is, comparatively speaking, a pretty original story.

Especially good is the conceit of an abandoned town (actually an Old West set on the Paramount Ranch) being appropriated by an iffy group of quasi-religious types looking to make money through moonshine, plus blackmailing any poor drivers caught on the only road through town. The townsfolk are your standard Hollywood mishmash of redneck and hillbilly, and are pitted against J.D., his family and his friends, who are all what can only be described as proud white trash archetypes. The waitress he falls for in Texas City is different and better than the other folks in town because she, too, is of the white trash stereotype, not the redneck/hillbilly stereotype.

It’s a very odd situation, one that you’d expect came from someone outside the U.S. who didn’t quite understand the usual socioeconomic divides in Hollywood movies (I’m thinking specifically of Michael Curtiz’s hilarious butchering of the “peckerwoods” versus the rich folks in Cabin in the Cotton). Not so: Breaker! Breaker! was written by Terry Chambers, most definitely an American. You can see him in the 1968 Monkees classic Head; probably not coincidentally, Kristine Helstoski, one of the unseen trucker voices, also appeared in Head. Both were credited with their names and characters spelled backwards. I don’t know what that means, but there it is.

See that poster at the top of this article? None of that ever happens in Breaker! Breaker!, and none of those people are actually in the film. Yeah, it’s pretty great. I assume those menacing men are meant to be the faceless truckers who are only heard in the film, not seen, voiced by now-anonymous people who I can only presume were well-known truckers in 1970s C.B. culture. 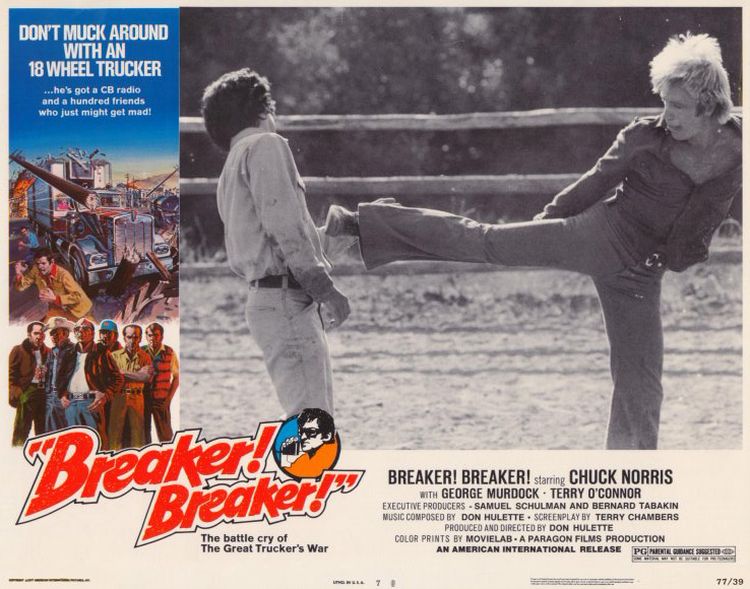 Chuck is, for the most part, already the Chuck we know and love, with the bad haircut and action jeans — or, rather, the original Kickin’ Jeans, as Chuck had not yet created his own brand of jeans made for, er, kickin’. He’s still new to this headlining thing, though, and is even stiffer than usual in his performance. That said, because he hasn’t become a household name yet, the director was comfortable with working around Chuck’s limitations instead of trying to just power through them, which is what usually happened in films like M.I.A. and Code of Silence. That’s why we get a quick romance montage without dialogue, for example, and a lot of fight scenes where Chuck doesn’t have to talk or emote or walk like a normal human being or anything.

Judge Trimmings (a fantastic George Murdock) owns everything in Texas City, which isn’t saying much since it’s basically an old California ghost town that these characters are all squatting in, but it’s fun to watch for the prop departments’s single “A Trimmings Enterprise” sign. This poor sign gets moved from one prop to the next, showing more and more wear until its final scene on a helicopter, where it’s so beaten up from being ripped off things and re-attached that it’s probably a safety hazard.

Thankfully, Breaker! Breaker! contains at least 55% violence by volume, which makes some of the more intolerable performances and weak plot points easier to take. There are some really weird and accidentally subversive moments in the film, and a skewed notion of America (and Americana) that is genuinely entertaining. You should get yourself some beer, get yourself some popcorn (I like mine with little chunks of havarti in it, because I am a snob), and settle down for an hour and a half of bonkers Truck Chuck action.

I know this will come as a shock to most of you, but The New York Times didn’t like Breaker! Breaker!, I mean really didn’t like it, and I wanted to share this snippet of their review with you: “The film is rated PG (Parental Guidance Suggested) probably because of some explicit dialogue and some violence, neither of which is as startling as these juvenile proceedings.”

That is a solid New York Times burn, my friends.

Breaker! Breaker! is now out on Blu-ray, thanks to the fine folks at Olive Films.