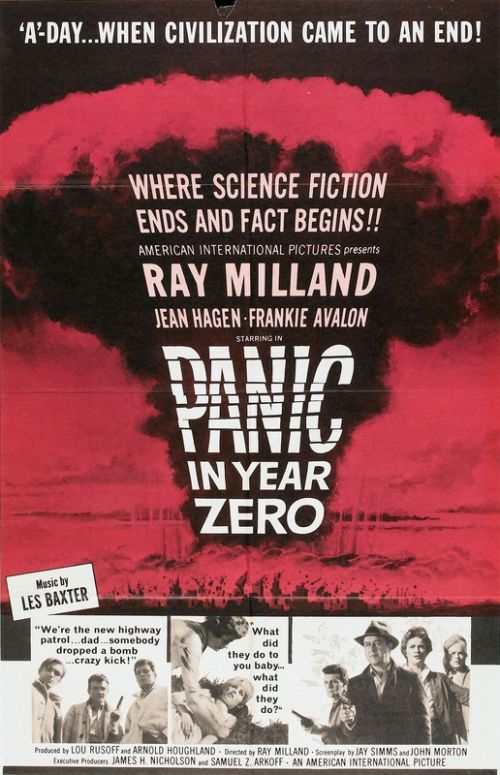 There’s not much panic in the opening scenes of Panic in Year Zero! (1962), as Harry Baldwin (Ray Milland) and his little nuclear family (ha!) head out pre-dawn for a camping trip. About an hour outside of L.A., they hear a massive explosion: the metropolis they just left behind has been destroyed by a nuclear attack. Harry decides to drive toward the mushroom cloud, as one does, and the family acts about as put out as they would be had the rumble and flash turned out to be a thunderstorm. Eventually their senses — and a sense of panic — kick in, and survival becomes their only concern.

Because 1962 was still in the grips of the 1950s, Panic in Year Zero touts the benefits of survival through rampant commercialism. Harry, who very sensibly takes about a thousand bucks in cash with him on fishing trips, soon realizes that there’s nothing in L.A. to go back to, and money is all they’ve got to help them survive. He systematically purchases guns, gas and food… or at least tries to, but is thwarted at every turn by raging selfishness, like when a hardware store owner doesn’t want to take his $200 check. Hey, Harry’s just trying to screw the guy over, as is his God-given right. What’s the problem? When the shop owner isn’t convinced that Harry’s check is good, what with Armageddon erupting just down the road and all, Harry and his son hold him up with his own guns, steal what they can’t pay for, and run off.

There is plenty of unintentional hilarity, which SBBN has long held is the best kind of hilarity, in scenes like these. The insufferable Harry is an old-fashioned version of the typical American male, a grim-faced patriarch whose bad decisions go unquestioned simply because of his social status. But he’s made interesting by the fact that the film seems to consider him a flawed hero, a generally good man undone by extreme circumstances, though most in the audience would likely think men like him to be less the saviors of society than the root cause of the social destruction he claims to be so worried about.

Though, truth be told, he’s not as worried about it as his wife Ann (Jean Hagen) is, who seems to be regarded with hostility simply because she doesn’t agree that society will crumble; it’s not that her philosophy is questioned, though, but her obedience to her husband, and the big lesson she learns along the way is that Harry’s little crime spree was not only necessary but moral.

More troubling is their daughter Karen (Mary Mitchel), a character who is given little to do beyond be occasionally annoying and eventually get raped. Almost as troubling is the appearance of Marilyn (Joan Freeman), the girl some always-lurking hoodlums have hidden in a back bedroom of a house they have appropriated and is, the best we can tell, kept there as a sort of all-purpose sex toy, though why she doesn’t sneak out a window while the idiots are getting drunk and slouching in the living room is never explained. She’s in the film for the rape factor, but also to turn Harry’s teenage son Rick (Frankie Avalon) from a boy to a man.

The end of her story arc leads to some revenge that at least gives her some power, more than the women in the family unit get, because it’s understood that they have given up their power to the patriarch and, to a lesser extent, Rick. Marilyn’s revenge isn’t so much about her as it is about proving herself to be a worthy mate for Rick, someone less stupid and worthless than his mom and sister, though one supposes that she too will have to give up her personality and power to her eventual husband. Maybe less than the women of Harry’s generation had to, though, so, you know. Progress.

It’s not just that the film is sexist — this is a low-budget science fiction flick from the 1950s, of course it’s sexist — but that these specific plot devices anchor the allegedly crumbling post-destruction society so firmly into standard American culture that you can’t figure out why Harry thinks American society has been irreparably damaged. Everything that happens, from sexual assault to theft to murder, was common enough in 1962 already; no nuclear holocaust was necessary to bring it out of the shadows. In the case of murder, the historic lows of the mid 1950s had long since disappeared by the time the film was released, and in less than two years, the U.S. would be in the midst of an explosion of violent crime.

Some of this strange denial about the state of non-nuked American civilization is likely due to the unofficial source material, two mid-1950s novels by Ward Moore called Lot and Lot’s Daughter. Warren and Thomas’ seminal Keep Watching the Skies! makes reference to Moore having perhaps settled out of court with the filmmakers for copyright infringement. Joe Dante also mentions Moore in the featurette that accompanies the film on its recent Blu-ray release, but Moore’s name doesn’t appear in the credits. Still, the opening scenes and the deeply earnest concern with the effects of thermonuclear war on everyday Middle Americans are based on Moore’s book, yet as Richard Harlan Smith notes, Panic in Year Zero is determined to stay as neutral and hopeful as possible, given the circumstances, rather than delve into the cynicism of Moore’s novels.

The acting in Panic is actually pretty good, which I say with some surprise, as performances are usually the first thing to go in seriously low-budget flicks like these. Milland not only starred in the film but directed it, and though his direction is as sturdy and unobtrusive as his performances usually are, he seems to have been quite good at coaxing life out of skittish screen newbies. Avalon is solid as the teenage Rick, giving what teen mags at the time called “his best screen performance to date.”

The trio of hoodlums — probably meant to be greasers but who look more like beatniks — also give good performances, considering their characters are so one dimensional and that their inclusion is such an odd, though exploitative, touch. There’s a jazzy Les Baxter score in Panic, so inappropriate at times, in part because it’s the kind of thing these hoods would listen to. (It should be noted that Wheeler Winston Dixon claims in Early Film Criticism of Francois Truffaut that the score was originally intended for another film, and Milland tried his best to prevent the score from being used, knowing it was a bad choice, but the studio vetoed his objections.) As clumsy as the whole thing was, you gotta remember that these greasers were in the film for a reason: to distinguish between the wrong kind of crime (beatniks) and the right kind of crime (middle-aged white businessdudes).

Mary Mitchel in an interview once said that she thought two of the hoods played by Rex Holman and Neil Nephew (a.k.a. Neil Burstyn, husband of Ellen) weren’t actors, they “were just punks.” [2] That would probably be a surprise to them both, given their extensive credits both before and after Panic. Richard Bakalyan, ostensibly the head greaser/beatnik/pun/perv and the one guy Mitchel believed to be a “real” actor, appeared in Pressure Point this same year.

Visual and thematic elements in Panic seem to anticipate Night of the Living Dead (1968), oddly enough, with its dark scenes and oddly slow-moving folks in the distance and mud splatters looking a lot more like blood than you would expect. Panic in Year Zero can be a dull and silly affair at times, but it has a realness to it that most nuclear paranoia films of the era sadly lacked, and as such remains compelling even at this late date. It was surprisingly influential, too, as the extras on the new Blu-ray release from Kino Lorber — audio commentary by Richard Harlan Smith and a Joe Dante interview — will attest.

Panic in Year Zero! is available for pre-order at Kino Lorber, and will be released on April 19, 2016.