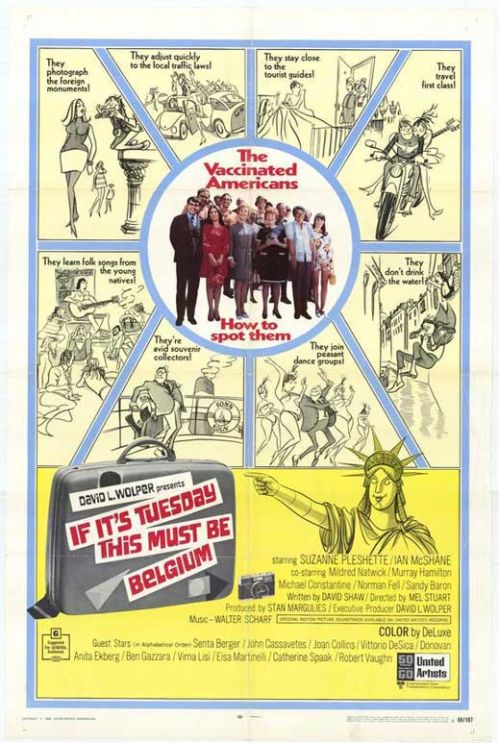 If It’s Tuesday, This Must Be Belgium (1969) was made the decade before I was born, and it has absolutely  nothing to do with universities (and precious little with teenagers), but it will always remind me of college. That’s because it wasn’t until college that I finally got cable — my parents were the kind of Greatest Generation killjoys who wouldn’t pay a cent for television, not when they had gotten the DuPont Network for free, by God — and I found myself spending more time analyzing the Encore line-up than the Modernists I was supposed to be studying. This was just around the time If It’s Tuesday, This Must Be Belgium first made it to home video on VHS in 1993, and it seems counterintuitive to also have the film practically on repeat on cable, because a blank VHS tape was quite a bit cheaper than a movie was, but what do I know, I am not a professional home video economist. That late-night cable pan ‘n’ scan version of Belgium is the version I’ve always been familiar with, so I admit I was excited to see the film in now out on Blu-ray from Olive Films, because I was sure that my underwhelmed early opinion of the film was due in large part to not being able to see it very well, what with one-third of the image cut off.

I’m pleased to report that my suspicions were confirmed. I’m also pleased to note that now that I’m not a strung-out 18-year-old watching movies instead of finishing my term papers, I “get” Belgium more than I ever did. First of all, I know who Ben Gazzara and John Cassavetes are, so their cameos are now amusing rather than confusing. I recognized Aubrey Morris and was no longer grinding my teeth in anger over Ian McShane’s terrible turn as Lovejoy. 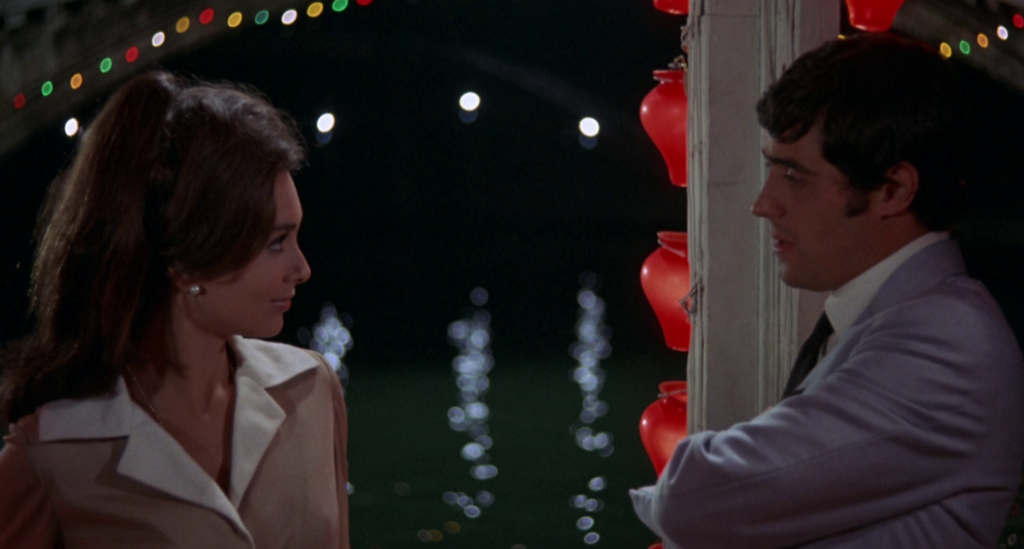 But — and I say this with some regret — I still cannot tell you if the songs by Donovan are meant to be parodies or not. They sound like parodies but I have a sinking suspicion they were offered up at face value.

If It’s Tuesday, This Must Be Belgium is, as the title indicates, about the kind of package European tour that Americans were mad about in the 1950s and 1960s. An 18-day jaunt through nine European countries, the mostly middle-aged Americans start out hopeful but within a day or two find themselves exhausted. The tour begins in London, where they meet up with the multilingual, ultra-mod tour guide Charlie Brown (Ian McShane). Charlie, who has a girlfriend in every port and seems to just assume the pretty ladies on his tour will sleep with him, sets his sights on Sam (Suzanne Pleshette) who, at first, is having none of it.  She’s there to think about a marriage proposal from her bland boyfriend, while those around her, played by a host of fine character actors and amusing guest cameos, have their own little missions. 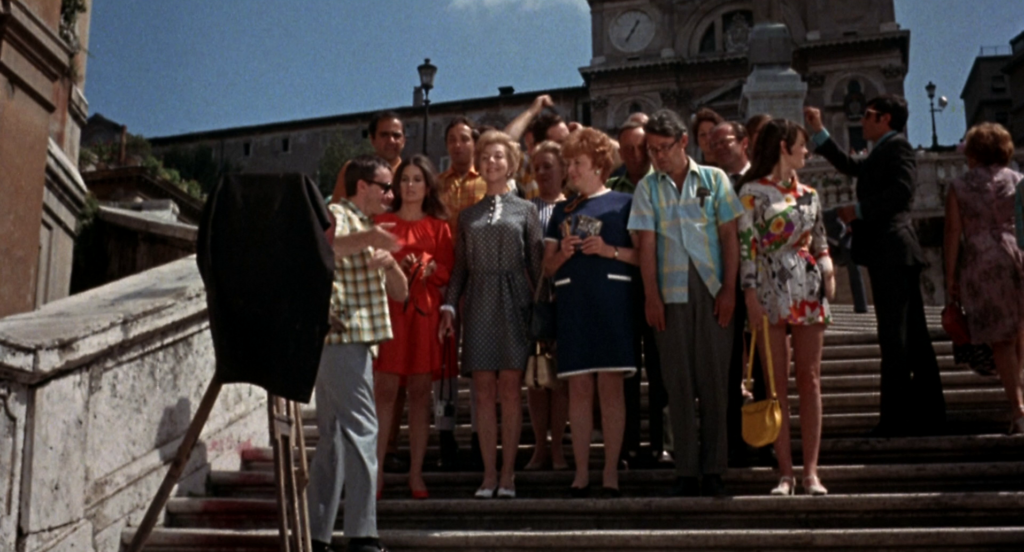 The plot hinges on the typical 1960s romantic dilemma of whether a thoroughly modern girl with a job and a social life and her own checking account can truly be the kind of girl a guy would want to marry, because she might as well be a man with all that free will she’s got goin’ on, and of course this particular girl is called “Sam,” to emphasize that point. There’s even a scene where she goes full I Love Lucy and gets into a fender-bender and cries about it (dames, am I right guys? back me up here) and Charlie has to rescue her.

Yet underneath that stereotypical late-60s conservative backlash veneer are some really interesting points being made, points that director Mel Stuart sadly seems to have not noticed. Charlie is a bit retrograde yet hypocritically has no problem with the sexual revolution side of women becoming more independent, something that is not lost on the audience. Fred (Murray Hamilton) has a few lines that are blatant admissions of his pointless sexism, which isn’t all that great as far as nuance goes, but it’s nice to see a film of this era being so matter-of-fact about his motivations. Usually, you get the sexism played for laughs for 90 minutes and a quickie ending that proves that the sexism may have been mean, but underneath it all, it was right all along.

You don’t get that here in Belgium, not with Fred’s daughter (Hilarie Thompson) and not with Sam. Still, this is 1969, after all, so the movie’s gotta be a great big garbage fire of grossness about something, which is why we have Bert (Marty Ingels), the guy who surreptitiously takes up-skirt shots of women when they’re not looking. It’s hilarious when they slap him! Aren’t women adorable, thinking they have the right to be out in public without guys laying down underneath them and looking at their underwear? So cute. 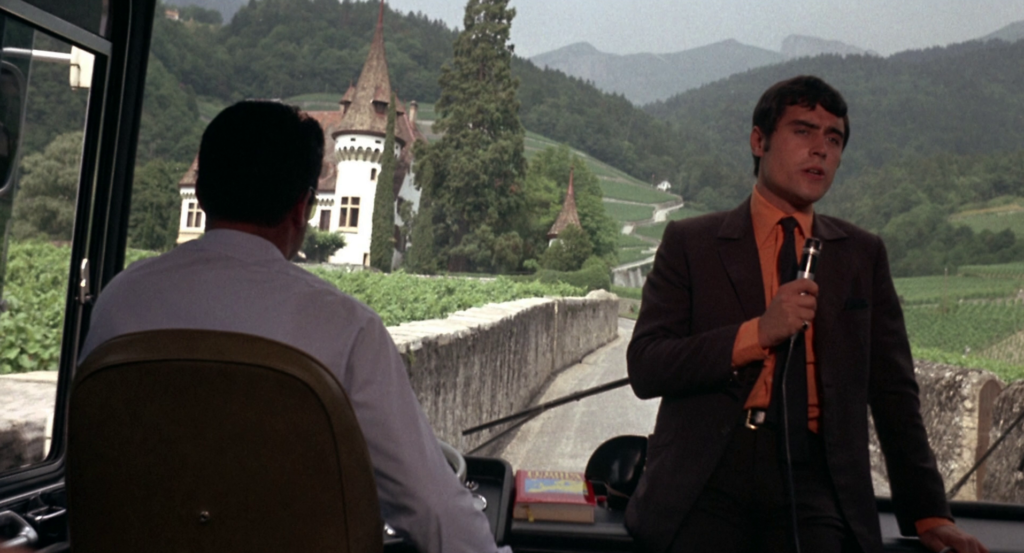 I was about to tell you that Ian McShane is smarmy in this movie, but that goes without saying.

But, again, when you’re watching a movie of this era, you gotta expect the crap, especially with comedies, and especially with what was obviously meant to be entertainment rather than art. For one, the crap wasn’t always recognized as crap; Exhibit A is Roger Ebert’s review, which praises Bert’s antics as “funny vignettes.” On the other hand, people were aware of the crapitude to a certain extent, which is why Ebert can’t muster up more than “pleasant” when describing the film as a whole.

And let’s be honest: the best films of the time, from Cool Hand Luke to In the Heat of the Night to Cape Fear, had racism and sexism and other -isms, but all for a purpose. There was meaning to it, a message to be said. There are a few exceptions — Breakfast at Tiffany’s comes to mind — but one of the primary ways you can divide the good from the great in this era is how they handle the more complicated sociopolitical issues. For the most part, audiences and critics saw it that way, too. 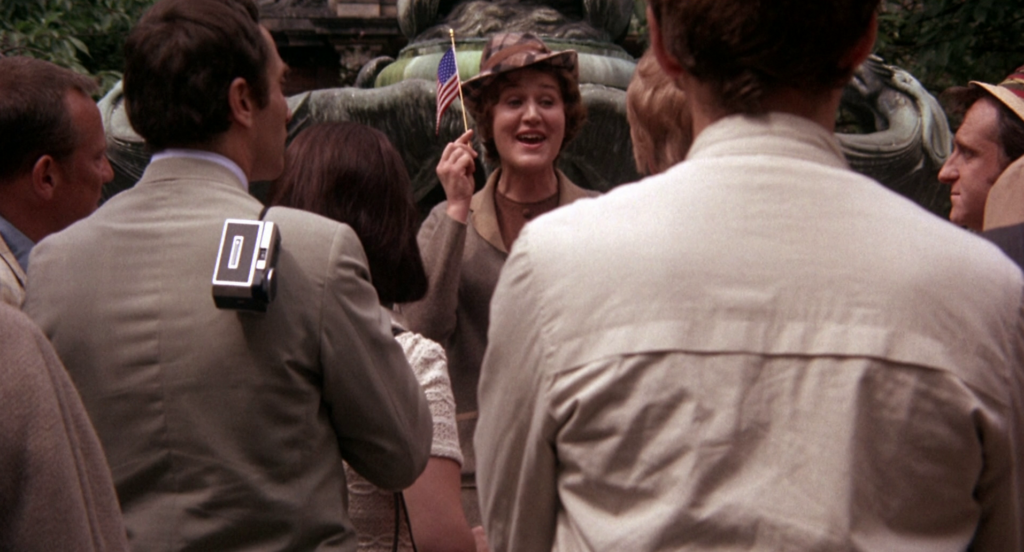 It’s Patricia Routledge! If you don’t recognize her face, you will recognize her the moment she speaks. Variety’s review of the film on its released singled her out for praise, and for a reason. She’s very funny, though nowadays I think most of us would see her character here as a practice run for Hyacinth Bucket.

Before we completely move away from the topic of film critics, I would be remiss if I didn’t direct you to Vincent Canby’s hilariously bitchy review in the New York Times. He complains that the title was stolen from a New Yorker cartoon — he’s probably right — then throws a little shade at a related television show, which he has not seen himself, because he is not the kind to own a TV, as you know. He has simply been informed of the existence of this show, and is passing this information on to you. 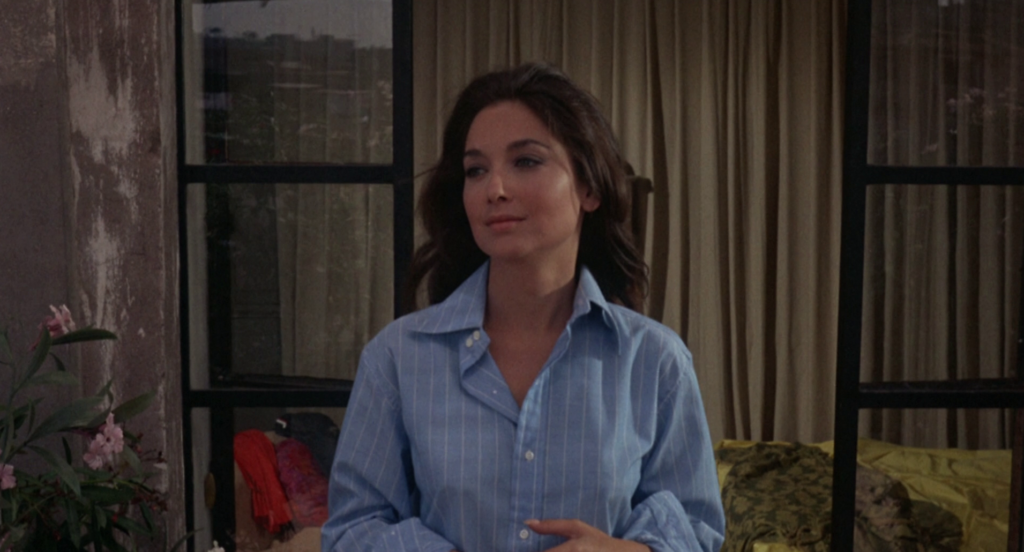 Olive Films has just released If It’s Tuesday, This Must Be Belgium on Blu-ray, which comes with chapters, trailer and English subtitles. It’s a nice transfer with a few of the same anomalies as in the DVD (including a gate hair, something I’ve seen in literally every Blu I’ve reviewed from every company over the last few months; my theory is that it’s the same hair) but with overall fine video quality and exceptional audio quality.