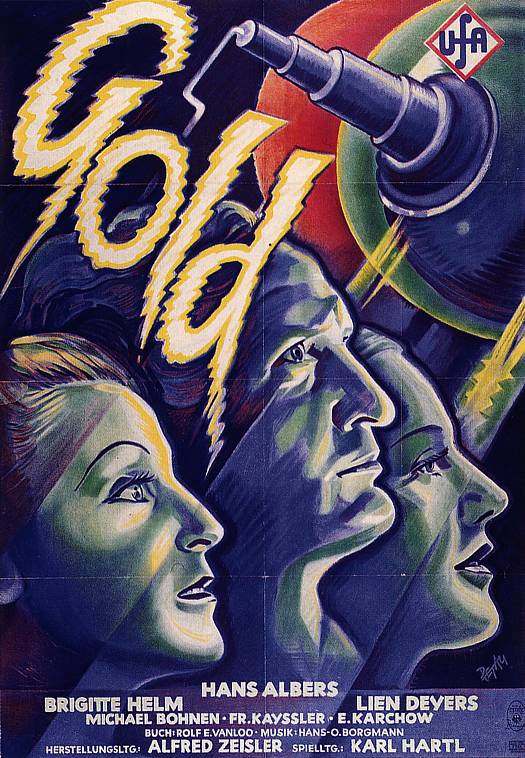 Scientists Werner Holk (Hans Albers) and Professor Achenbach (Friedrich Kayßler) are on the verge of solving the ancient mystery of turning lead into gold, when tragedy strikes: their laboratory explodes, killing Achenbach and seriously wounding Holk. After a life-saving blood transfusion from his fiancée Margit (Lien Deyers) and a lengthy recovery, Werner begins to suspect that the explosion was sabotage. When two henchmen working on behalf of millionaire businessman John Wills (Michael Bohnen) arrive and offer Werner a chance to work on Wills’ own experiment, he’s convinced of it: Wills’ blueprints are an exact match to his and Achenbach’s. With revenge in mind, he agrees to join Wills’ team, but the lures of Wills beautiful daughter Florence (Brigitte Helm) and the opportunity to prove that he can indeed make gold out of lead test his resolve. Will he exact justice or fall to the all-to-human failing of greed? 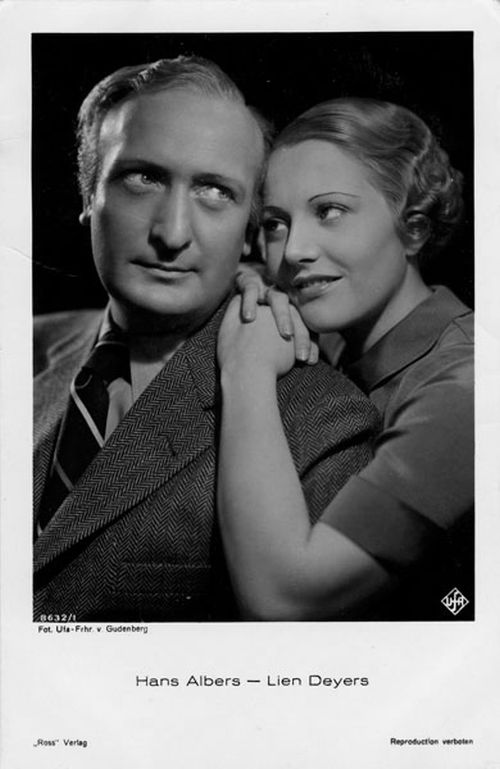 Gold (1934), Karl Hartl’s international hit and one of the first German films to reflect the new rule of the National Socialist party, was a technical triumph that took over a year to film. It borrows a lot from Metropolis, as one would expect, though is far more mainstream and populist. Hans Albers was a German institution by this time, though it’s tough for us nowadays to understand why a large, older, balding man with little natural charisma would be so popular — literally every person, even the background extras, in a Fritz Lang film of this era is more interesting than Albers. He gives a competent performance, though the real draw here is Brigitte Helm, who is subtle and glamorous and fascinating. She adds depth and interest to a film that in a lot of ways is a bit of a railroad plot, and her look, if you forgive the eyebrows, is quite modern.

Kino Classics has just released Gold on Blu-ray, a follow-up to the DVD release from a couple of years ago. Prior to that, Gold was one of those movies that was so rare you weren’t sure a copy of it even existed anymore. Blu-ray.com mentions the lack of restoration on this film for its Blu-ray release, and it is indeed noticeable. Yet as someone who has relied for years on an old copy of Gold recorded off the late-late show on some European television channel, I can personally say that I find the quality quite good. The bootlegs of Gold that have floated around weren’t terrible, but I think you’ll find that seeing it now, even unrestored, provides a lot of detail that you likely missed. And, at least for me, one short scene between Werner and Margit has been included that I did not have on my old TV copy.

As for screen captures, I would love to show you my own examples, but my player is refusing to cooperate, so please to enjoy promotional photos instead. You can also head to Blu-ray.com for the usual tech spex. 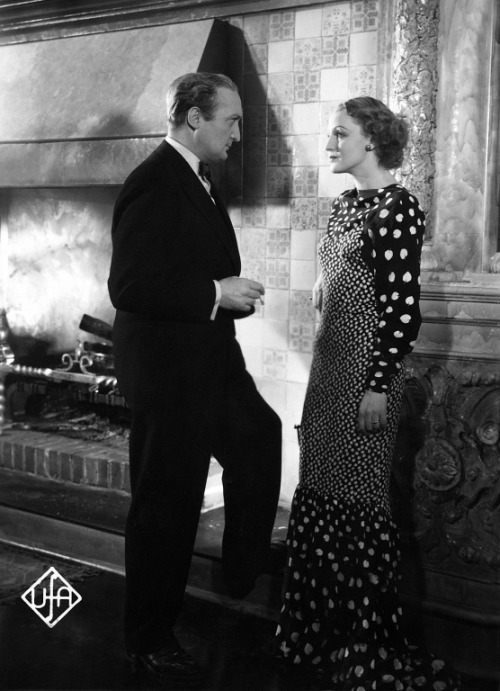 With this clearer copy of the film, I was slightly disappointed to see that Florence’s dress, which I had thought was covered in an apple pattern — because she’s tempting Werner to sin, you see — turns out to actually be a leaf pattern. Very pretty but not the metaphor I thought it was.

Though technically science fiction, Gold feels more like a thriller centered around corporate espionage, with a little National Socialist rhetoric thrown in for flavor. Those worried about the Nazi influences can probably rest easy, as most of the propaganda occurs at the beginning and in the context of women’s roles as supporters of men, with blind acquiescence and major sacrifice being seen as their primary duties. Florence’s support of her father is not seen as her duty, which makes sense given the unrelenting greed involved in his scheme, but also furthers the National Socialist cause. In the early 1930s, Hitler’s popularity was based almost entirely on his promise to end unemployment, and a major plank in his jobs platform involved taking jobs away from women and encouraging them to “traditional” female roles of wife and mother. That’s why Margit’s childlike obedience rates loud, patriotic music, while Florence’s intelligence and free will is seen as something dangerous to man and country. 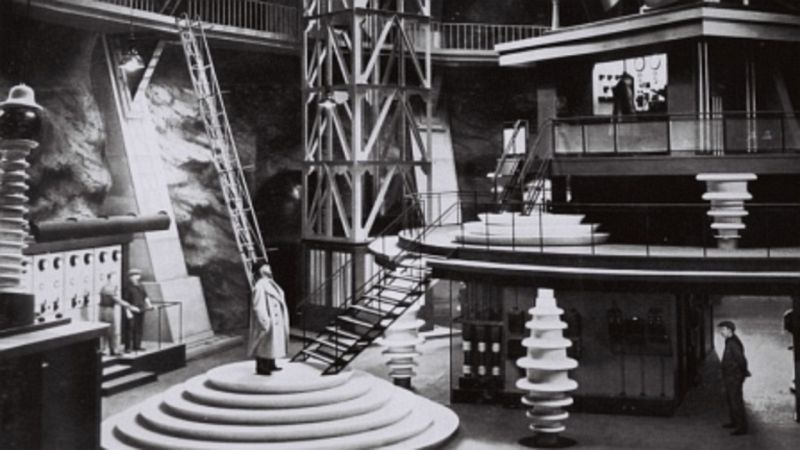 Over the years, I’ve seen the occasional claim that Wills (the tiny man shown on the left) is a Jewish businessman, though there is no hint of that in the film, and the name Wills is certainly not a Jewish one.

Screenwriter Rolf E. Vanloo was prolific during Germany’s silent era — his most famous film would be Asphalt — but faltered in 1929 when talkies took over. His first talking picture is frequently listed as the romantic trifle Hello Berlin? Paris Here! (Allo Berlin? Ici Paris!, a.k.a. Here’s Berlin), but he didn’t write the script; it was his novel which had been adapted into a bilingual feature film available in both France and Germany. His first script for a talking picture was Gold, and showcases his writing abilities well, especially with regard to the economic aspects of the plot, which were entirely his own invention and not influenced by the new National Socialist rule.

See, when it came to economics, the Nazis didn’t really have a particular stance beyond “we want money and lots of neat stuff.” According to economist Hans Joachim-Braun, National Socialists deliberately kept their economic theories vague, despite the famous Twenty-Five Point Program introduced in 1920. Gold therefore doesn’t espouse any particular National Socialist economic theory or dream beyond the criticism of individual greed. 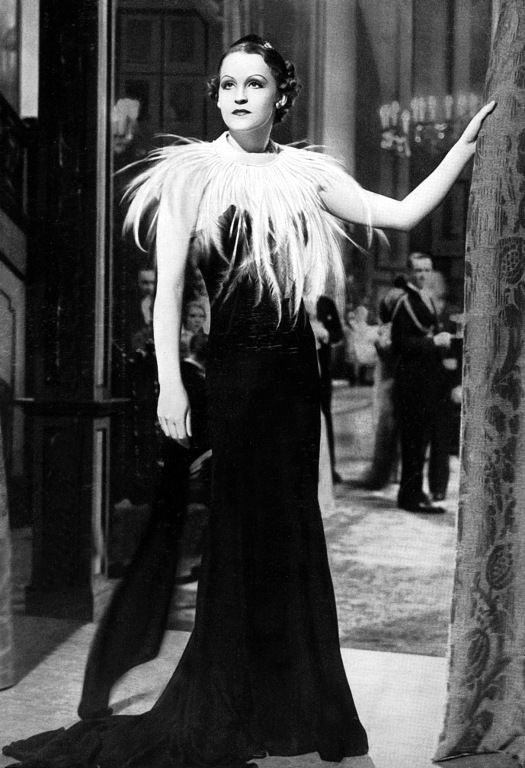 Still, no government, especially not the Nazis, would be pleased with the idea of a wealthy industrialist making his own gold. Further, with the introduction of large-scale government construction through the Reinhardt Program — the fascist version of the New Deal — it’s likely the National Socialists of 1934 would have been pretty put out by a private citizen using large groups of laborers for a private venture rather than something meant for all citizens. That said, Hitler was gearing up for war, and though details on Wills’ businesses are sketchy, he may very well have been an industrialist who Hitler would have wanted to stay on the good side of… or at least until he decided to destroy the gold standard because he wanted to be a Bond villain. 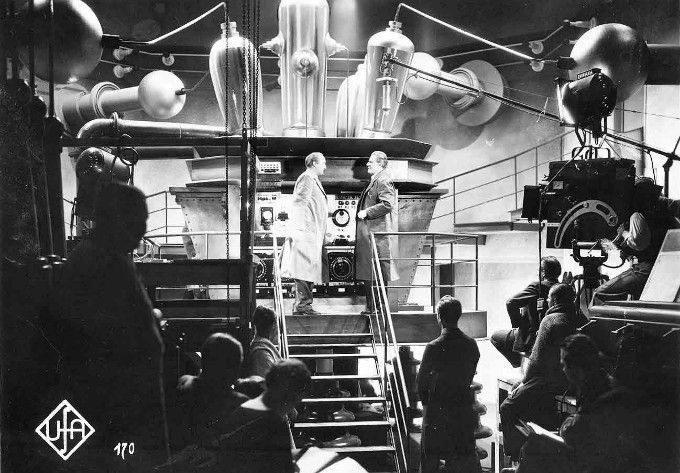 You’re probably asking the obvious question: wouldn’t making all the gold you wanted actually devalue the amount of gold, thus undermining any wealth you attempt to gain from your little alchemy scheme? Yes, yes it would, and in the third act Gold finally addresses that enormous elephant in the room, and the rather subtle corporate espionage plot turns into panic and revenge and lots of shots of the neat three-storey contraption that turns 20 pounds of lead into a lovely little gold nugget.

Gold is an odd little bird, irresistible and entertaining despite being a bit thin on plot. It’s believable and thoughtful and the performances range from good to fantastic. It’s hard to imagine getting all worked up over alchemy here in the amazing futuristic year of 2016, but it’s easy to do with Gold.

—
Sources:
The German Economy in the Twentieth Century (Routledge Revivals) by Hans-Joachim Braun