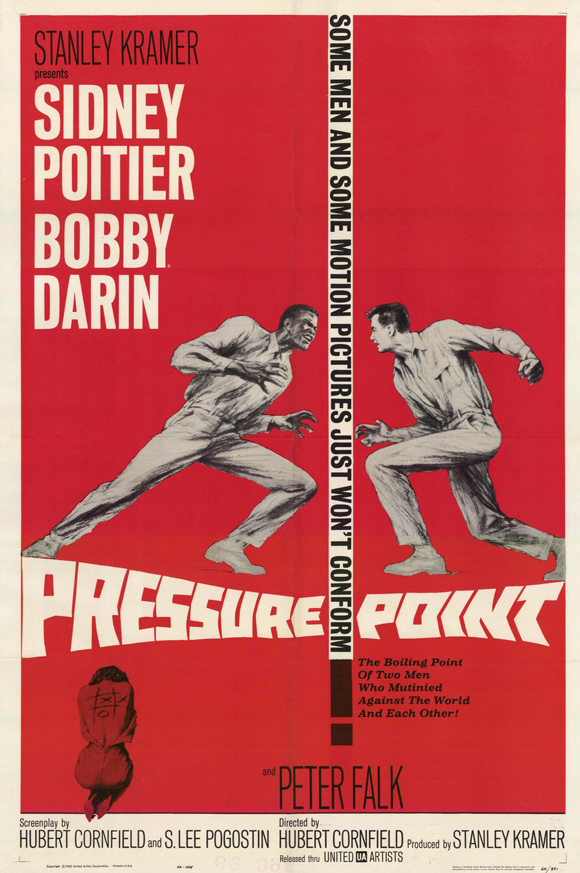 Considered now a minor classic, Pressure Point (1962) was, at the time, a box-office flop, described by preeminent pearlclutcher Bosley Crowther as “shrill, flaring and heavily melodramatic“… and that’s one of the nicer moments in his review. What Crowther only begrudgingly admits is that Pressure Point contains some fine performances. In fact, the film features some of the finest performances of 1962, or indeed of the entire era, not just with Sidney Poitier’s terrific turn as a psychiatrist, but in its foreshadowing of the indie films of a few years later, particularly in the performance of Peter Falk, but also in Bobby Darin’s performance as well.

Still, it’s true that the film hardly broke new ground at the time. With music and imagery straight out of “The Twilight Zone” and Poitier playing what was almost a stock character for him at the time, there wasn’t much that would attract audiences. The same goes for Pressure Point’s attempted — and some would say, failed — emphasis on social problems. The Patient (almost no one in Pressure Point is given a name) is a Nazi sympathizer in World War II, and in 1962, that must have seemed like a hopelessly dated cause to explore, even if it was meant to be somewhat metaphorical and prophetic. And with Poitier starring, after having made such an impact in movies like The Defiant Ones (1958) and Raisin in the Sun (1961), even the issues of race relations explored in the film seemed a touch out of date.

Pressure Point begins when fed-up young psychiatrist (Falk) threatens to quit over a difficult case with a troubled patient. His supervisor (Poitier) tells him a story of his own difficult situation twenty years prior, when he worked as a prison psychologist and was assigned an unrepentant racist (Darin) as a patient. Directed by Hubert Cornfield, the framing story — the scenes set in the ostensible present — was directed by Stanley Kramer.

Pressure Point doesn’t do a lot with this flashback trope, at least no more than any other movie of the era. Poitier is made up to look older, Falk comes into his office ranting about a difficult case he has to work with, and Poitier begins to tell him about his own troubling case from two decades prior. The flashback is necessary, in that the patient is a Nazi sympathizer and the incident is set during World War II; tangentially, the patient does take exception to being called a Nazi by other prisoners, so there is a touch of ambiguity involved, probably a reflection of the character’s inner conflict. Still, Bobby Darin in an interview inexplicably called the character a “Bundist.”

Darin gives a truly fantastic performance in what is an incredibly tough role, and even when he as an actor is lost, it meshes so well with the character that it’s not jarring in the least. Poitier is as terrific as you would expect, and I think something that gets lost in all his calm, dignified, professional roles is the depth to which he portrays his characters. On the surface they seem almost the same, film to film, but Pressure Point is one of the few films where you can actually see the nuance in his craft. 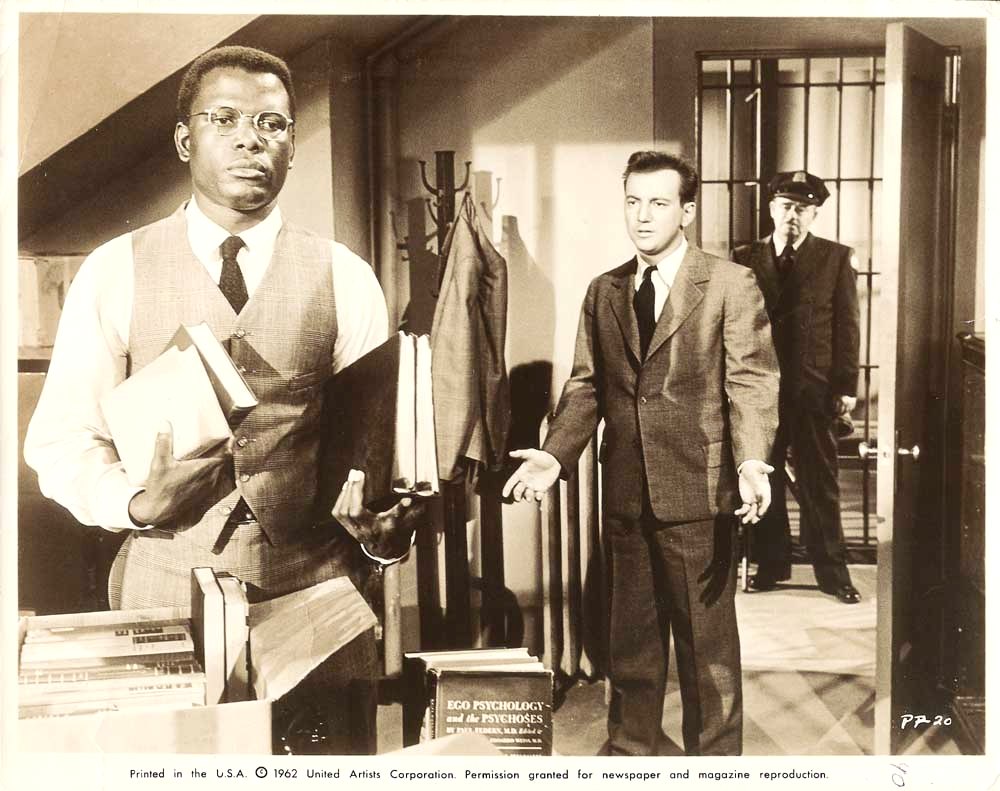 Pressure Point is a film that I think has worn better than anyone would have expected, in part because, even though it mostly takes place in 1942, it deals with the issue of a black doctor working in a white man’s world in the context of 1962, not 1942. That made sense culturally at the time, though it doesn’t entirely work in pure storytelling terms.

A partial explanation for this might be the fact that Pressure Point is based on the life of Jewish psychologist Robert Lindner and his struggles with anti-Semitism during WWII. Kramer, having an affinity for the social problem film, had, as Andrea Slane notes in A Not So Foreign Affair, been leading up to Pressure Point with prior films such as Home of the Brave (1949). In that film, based on the Arthur Laurents play, Kramer had also changed the character of the Jewish soldier to that of a black soldier. The why behind this is likely complicated, but Kramer’s own words about Home of the Brave, from Donald Spoto’s Stanley Kramer: Film Maker, might help explain:

“Arthur Laurents was a gigantically talented young playwright,” Kramer remarked years later. “So I went to New York and bought the rights for $35,000. A pittance. But I didn’t tell Laurents that I wished to make the switch from a Jewish to a black protagonist. The play had been a failure because it depended on a great deal of talk about a man feeling different. But what was so different? For the dilemma to be understood, the character had to say he was Jewish. But the play was certainly about the kind of prejudice we all knew when we were young in New York.”

Kramer was one of the few filmmakers who could make earnest social problem films really work, and Hubert Cornfield, though not a bad director, just didn’t quite have the same touch as Kramer. But who does? The melodrama in Pressure Point is a feature, not a bug. Pressure Point has a lot to say, and just because it didn’t fit into the trendy sophisticated cool of the early 1960s doesn’t mean it lacks relevance today.

Pressure Point is now out on Blu-ray from Olive Films. The disc includes chapters, the trailer and English subtitles, with fine image quality and a surprisingly good mono score. You can get your tech spex and screencaps here at Blu-ray.com.