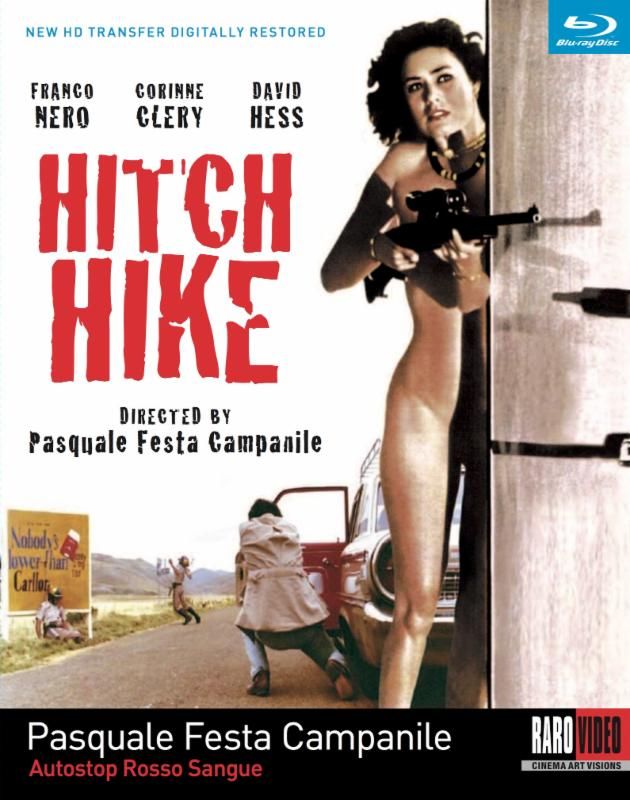 Alcoholic reporter Walter Mancini (Franco Nero) and his wife Eve (Corinne Cléry) are traveling and arguing through the California countryside, on their way home from what seems to have been a pointless vacation. Between bitter arguments, the couple irritate other campers, fantasize about killing each other and hate fuck each other on top of animal corpses, as one does. Mostly out of spite, Eve picks up genial hitchhiker Adam (David Hess), but soon comes to regret it: Adam is a criminal on the run, and any hope Eve and Walter have of getting away from him alive is dashed when they see Adam blow away a couple of California state troopers.

Hitch Hike (Autostop rosso sangue) (1977) is one of the more original and esoteric of the 1970s exploitation flicks, primarily thanks to the unpredictable relationship that develops between Adam, Eve and Walter. Part Stockholm Syndrome, part stubbornness and part selfishness, with a touch of idiocy thrown in for texture, the way Walter and Eve deal with their captor (and, later, his partners in crime) turn Hitch Hike into the kind of psychological drama that most Italian gialli of the era reached for, but never quite attained.

Still, the overzealous nudity and prurient softcore sensibilities of the film make it disappointing in almost the exact same way most exploitation films of this era are; that is, Hitch Hike pushes uncomfortable and interesting topics further than mainstream films, but never goes far enough. And like so much exploitation before and since, this is a film that uses the faux empowerment of a female character as an excuse to exploit the very same character.

There are arguments to be made about the film subverting various tropes, and it’s true that Walter, played with Franco Nero’s usual clear-eyed intensity, is interesting precisely because no one involved in the film cared to make him someone that the audience would sympathize with. Usually a protag of this sort has some kind of excuse for his behavior wedged into the film, but Hitch Hike feels no need for that sort of pandering; the audience, however, seems to disagree.

SPOILER PARAGRAPH: Hitch Hike is probably most famous for its unrepentant rape scene, where Eve is raped by Adam as Walter, tied up and beaten down, watches. If that’s not the film’s most famous scene, then what this rape leads to — Eve’s murder of Adam while she stands there, still naked from her attack — is the most famous, and arguably the most powerful, moment in the film. But the real point of all this seems to be lost on much of the audience. Walter had, for most of the film, been cozying up to Adam, and the pair would gang up on Eve. She protested but he assured her it was all part of his cunning plan to save their lives. Eve’s rape and alleged enjoyment therein turned out to be part of her plan, one that proved her to be stronger and more successful than Walter. It’s this realization that truly emasculates Walter more than the rape actually does, though in our eyes, it’s his teary-eyed sad puppy face during the rape that puts us off. What’s this bastard even crying about, anyway? That he’s not the guy forcing himself on her, for once? (END SPOILERS.)

It’s intriguing and almost empowering, but at the end of the day, the advertising and the imagery most closely associated with Hitch Hike tells you exactly what its true focus is. The rape and subsequent reactions of the characters are just cheap ploys, really, but if exploitation films are good at anything, it’s at finding some kind of universal metaphor to casually layer their exploitation with, so they can later claim artistic sensibilities. But if you’ve seen Troll 2, and I know you have, you already know just how convincing these supposed moral examinations within the films really are.

Despite having some good things going for it, much of what Hitch Hike gets right was the result of borrowing, or sometimes even accidents. As more than one person has noted, this is a film that borrows heavily from other films like Duel, and also seems to borrow from Rabid Dogs, which very famously hadn’t even been released yet. And as far as accidents go, Eve driving the car is a great touch, but only happened thanks to Nero busting up his hand on a prior film shoot. The casting of David Hess, famous for his role in Last House on the Left, was also thanks to Nero, who had recently worked with Hess (apparently on the same film he broke his hand on) and suggested him for the role. He wasn’t chosen to add a little cultural quoting; in fact, once he was cast, producers immediately started to cash in on his Last House on the Left past, including releasing the film as Hitchhike: Last House on the Left (as one of its many release titles).

Probably the most famous “accident” was really a matter of budget: the choice to use Italy as a stand-in for California. It’s not a very good match, thanks to the lack of ground cover and trees and cheap hand-painted advertisements. hey look as though they’re driving through a poor part of the lower Midwest during a dry winter. It’s the least populated California you’ll ever see, which works well for the atmosphere, though maybe isn’t so great for realism.

Still, it doesn’t feel entirely right to dismiss the film out of hand, as much as I might personally want to, simply because my own low tolerance for these exploitation shenanigans. Nero has some fine moments in this film, despite essentially just reprising his role from Luigi Bazzoni’s The Fifth Cord (1971), and what the film has to say about the nature of hypocrisy and power imbalance in heterosexual relationships is interesting.

Corinne Cléry is a real stand-out in this film. When she signed on, she had just made cinematic history in The Story of O (1975), and would go on to co-star in Moonraker and Yor, the Hunter from the Future, which pretty much makes her one of the most badass actors in the world. She’s beautiful, of course, and nude for much of the time, which I know is of interest to a lot of people in the audience, but she also gives a very good performance. She’s solid, believable, empathetic, and more than holds her own with two scenery-chewing baddies who seem about as friendly off screen as they are on.

RaroVideo and Kino Lorber have recently released Hitch Hike uncut and on Blu-ray — uncut is important, because quite a few of the more graphic scenes have been trimmed in prior releases and for the rare cable showings. Hitch Hike has been digitally restored and looks fantastic, with appropriate grain and solid color saturation. Especially good are the night scenes, which in most movies from this era look pretty iffy, but are clear and crisp here. Also included is a fully illustrated booklet, plus the documentary “Road to Ruin” featuring cast and crew interviews. Comes with both the Italian dubbed version with English subtitles (in a new and more comprehensive translation), and the English (mostly dubbed) version. The dialogue in each version is slightly different, though the plot remains the same, and since the actors were speaking English during filming, I personally found the English language version superior. Those looking for a more authentic experience will surely go for the Italian with English subtitles.

For a few screen shots, check out The Moon is a Dead World. Their review has spoilers, but their screen shots are from this Blu-ray version.