Fritz Lang’s Spies (Spione, 1928) is gorgeous, as all of Lang’s silents are, full of art deco designs and sharp-edged shadows and perfectly posed extras set amongst some truly stunning visual effects, impressive today, but so incredible at the time that they must have been nearly indistinguishable from magic. Lang has long been noted as a director who values form as much as substance, usually form and design as coupled with action and violence, such as the halberd scene in Moonfleet (1955) and the bloody steak scene in The Big Heat (1953). Yet in his early silents, Lang approached design differently, and in doing so managed the almost impossible: creating static, heavily posed shots and long takes without compromising the pacing of the film. As Noël Burch once put it, Spies is the “poetry of time beguiled.” [1]

In Spies, the smart and sexy Russian spy Sonja (Gerda Maurus) works — and kills — for the evil mastermind Haghi (Rudolf Klein-Rogge), but finds herself falling for one of the alleged good guys, known only as No. 326 (Willy Fritsch). But how good are the guys who strip someone of their entire identity and replace it with a number as though they were a car part, or a little slip pulled from the Turn-O-Matic at the local deli? 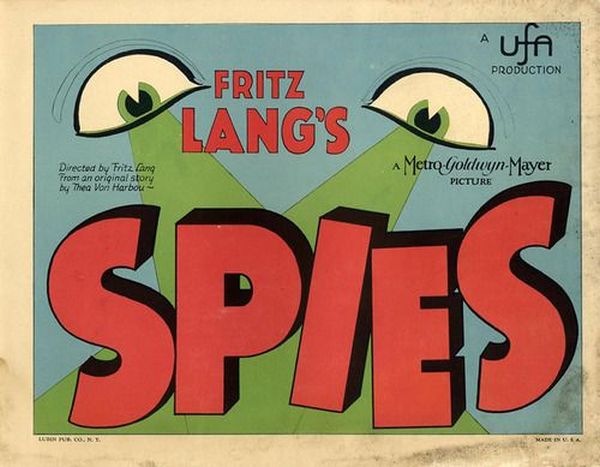 Haghi is the quintessential evil villain, the kind of character that would power the James Bond films for several decades, which means he wants to possess Sonja all for himself. He locks her away as No. 326 alternately worries about her and suspects her of playing dirty. Amidst all this is a secret Japanese treaty that Haghi attempts to steal, but one of the Japanese spies, Matsumoto (Lupu Pick), contacts No. 326, who soon becomes embroiled in this international intrigue.

Lang’s films have been called kitsch, in part because he so obviously strove to be popular, even Pop, but kitsch is rooted so heavily in what is popular at the time that it often fails to endure after its particular cultural moment has passed. Lang’s silent films, especially the Mabuse series, have endured; maybe they’re not so kitschy after all. Similarly, Matei Calinescu — who, it should be noted, was not defending kitsch in the least — wrote that kitsch could be “conveniently defined as a specifically aesthetic form of lying…the whole concept of kitsch centers around such questions as imitation, forgery, counterfeit, and what we may call the aesthetics of deception and self-deception.” [2]

Imitation, forgery, counterfeit, and self-deception are all major themes in Spies, which is (on one level) a story of the self as it struggles to retain its own identity in a cynical, industrialized, impersonal world. The visuals reflect that, and in a stylish and complicated way most silent films simply could not (or didn’t even try) to achieve. This comprehensive article on Edgar G. Ulmer, who may or may not have been responsible for the film’s visual aesthetic[3], dismisses claims of Ulmer’s oft-mentioned lack of substance as pure inattention, pointing out that if some moments in his films are only superficially enjoyable or, at times, accidentally hilarious, other moments “generate not amusement but bewilderment or awe.” 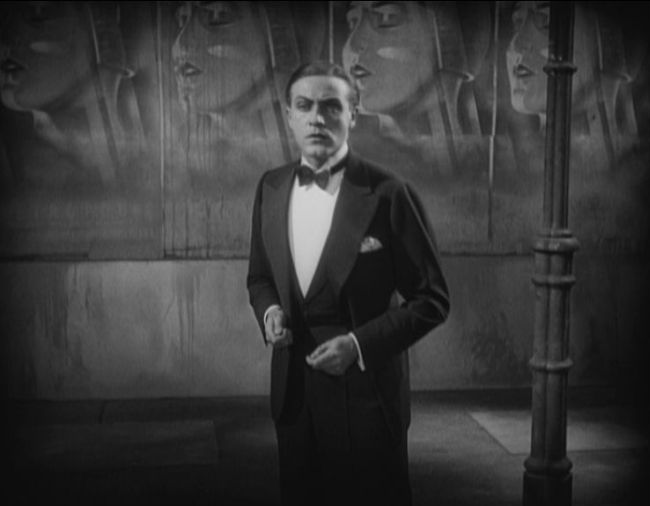 Screen capture from the 2004 DVD release of Spies.

Lang’s films, too, generate both casual pleasure and genuine astonishment, often at the same time. Spies may be considered one of his lesser (or less substantial) films, but when we see No. 326 stumbling around the street at night, posters for Lang’s own Metropolis (1927) covering the entire wall behind him, we’re not just seeing a director indulging in self reference. The close-ups of Brigitte Helm’s stylized face resemble the ethereal Sonya, and those posters might as well be thought bubbles floating over No. 326’s head. And though much is made about Klein-Rogge’s multiple roles in the Lang oeuvre, cinephiles seem to overlook other actors, characters and archetypes who are used repeatedly. In short, there’s a reason Sonya in Spies looks like Maria in Metropolis, and those posters help explain why.

Kino Lorber has just released Spies on Blu-ray as well as a new DVD. Features include the German featurette “Spies: The Small Film With Lots of Action” and an original German trailer. The only score on this edition is the Neil Brand piano score, which is quite good and the score I think quite a few people prefer. (Prior releases both in the U.S. and abroad included either Donald Sosin’s score or both Sosin’s and Brand’s; you can read more about my thoughts on Sosin’s score at my old post here, which includes a reply from Sosin in the comments below.) This is the 2004 2K Digital Restoration which has been previously released on DVD, and I found the image to look and feel identical to the previous release, though with better resolution on the obnoxiously large HDTV I own. Blu-ray.com notes a slight anomaly in the aspect ratio.

[2] As quoted in Monica Kjellman-Chapin’s An Introduction to Kitsch: History, Theory, Practice.

[3] One is never really sure when it comes to Edgar G. Ulmer’s early credits, though it’s notable that some of the visuals in Spies do seem to have been reused later for Ulmer’s The Black Cat (1934). Still, the interview where he claims to have worked on Spies is the same interview he claims to have worked on Der Golem and Metropolis, so the grain of salt, it should be taken.