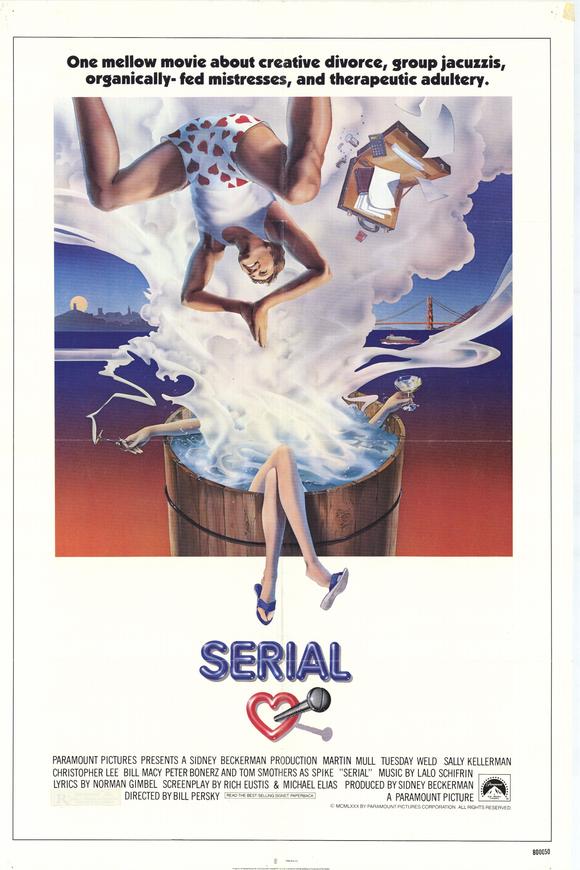 It’s the dawn of the 1980s, and the upper-middle-class hippie holdouts of Marin County, California are snarking and screwing their way through life, certain that health foods and open marriages will save their souls while blissfully unaware that they’re emotionally and psychologically adrift. Serial (1980), a dark comedy from long-time television director Bill Persky, follows an Altman-esque group of misfits and halfwits who roam their expansive homes in billowy, designer caftans, planning commitment ceremonies and pasting “Save the Whales” stickers on their retro Volkswagen vans, the ones parked right next to their Bimmers.

Serial stars Martin Mull and Tuesday Weld as Harvey and Kate Holroyd, a suspiciously Aryan, middle-aged couple struggling to raise their teen daughter Joanie (Jennifer McAllister) while expanding their consciousness and fully exploring the benefits of the Me Generation. Neither are really old enough to have a 16-year-old daughter, though, and that fact is just obvious enough to worm its way into your unconsciousness as you watch, wondering why nothing about this family makes sense. That’s not to say that it’s biologically or even culturally impossible for the Holroyds to have children; their presumed age at marriage meshes almost exactly with the statistical average of the time. But these are all people who are still hanging on to their hippie days, and it makes very little sense for the Holroyds to have been full-fledged hippies in the mid to late 1960s, while Harvey was establishing himself as a businessman and they were raising a toddler.

But Harvey is indeed a businessman, and apparently likes it, or at least likes wearing a suit more than he likes his wife wanting to talk about their relationship or eat granola. That granola thing shows up very early in the film, where the family dog, named Elton John in what is very likely a nasty joke about gays (more on that later), is fed granola but supposedly won’t eat it.

The whole scene is a mess, from the terrible dubbing to the odd use of outdated slang to the fact that the dog appears to actually walk off with the bowl, rather than shunning it as he was supposed to in grand you-shouldn’t-feed-this-to-a-dog tradition. Granola jokes were the domain of the early 1970s, mind you, as the hard-hitting political protest song “Crunchy Granola Suite” will attest (“good thinking!“).

Most puzzling is the moment when Joanie lets loose with a “groovy” that’s straight out of a Brady Bunch episode, a show that had been a hit back in the days when Elton John was king and hot takes on granola were just flying off the pages of your weekly news magazines. But this is 1980, The Brady Bunch had been off the air for over six years, granola cereals were so common they had been in the top five most popular cereals for a decade, and Elton John was releasing shitty disco albums. 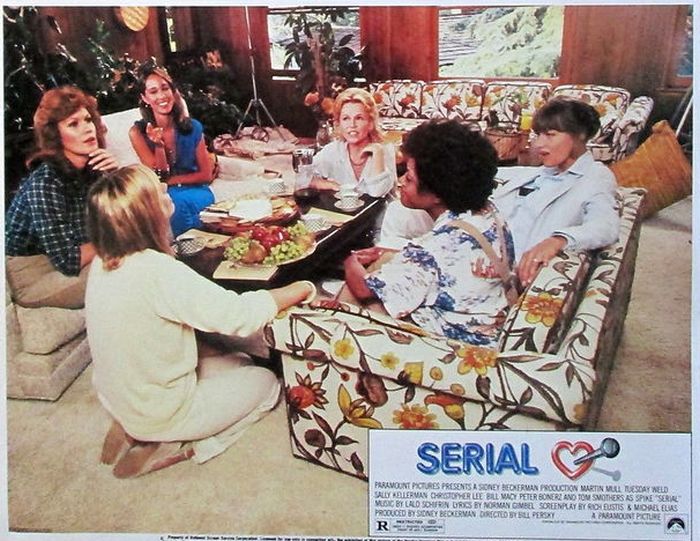 Serial combines the look of Caddyshack (1980) with the dialogue of Skidoo (1968), and while time and distance often dulls a film’s difficulty in capturing the culture of the day, with Serial, the disconnect is so pronounced that even here in the super-futuristic year of 2016, you can’t help but wonder what the everloving hell is going on. Sometimes it’s as if the characters are mocking the past. At other times, it feels very much like the filmmakers are mocking the 1970s and the actors, many of whom are dire, are simply unable to deliver the dialogue with any nuance.

The latter is probably the most accurate. The wholesale philosophical inconsistency of Serial just absolutely ruins any point it may have been trying to make. Based on the 1977 novel The Serial: A Year in the Life of Marin County, the film actually bears the most resemblance to the 1978 NBC documentary I Want it All Now! which was likely commissioned because of the success of the book.

In fact, Serial just straight-up plagiarizes dialogue from I Want it All Now! It’s tempting to think that the dialogue in question comes from The Serial and was repeated in the documentary, but it’s not likely that the real-life subjects in the documentary just happened to say the same things people uttered in a satirical novel a few years prior.

No, Serial just steals from peoples’ real lives, but it also knows that, between the book and the documentary, it had all been done before, so it very self-consciously attempts to keep the topic fresh by exaggerating it. When Roger Ebert wrote that it was ridiculous to even question whether Serial was accurate or not, it was from the perspective of someone who, partly to be cheeky and partly because he was always a little provincial, couldn’t quite grasp the supposedly common fact that truth is stranger than fiction.

But Serial wants truth that is fiction, because it’s funnier, I guess, and has more communes living in gorgeous, purple Victorian mansions and breast nudity than real life does. So the film takes a bucket full of one-liners and a few vignettes about confused Marin County folks then, with all the finesse of a two-ton anvil, wedges in an establishment character — Harvey — as the conflict and props him up as the sane one amidst all the insane folks around him. 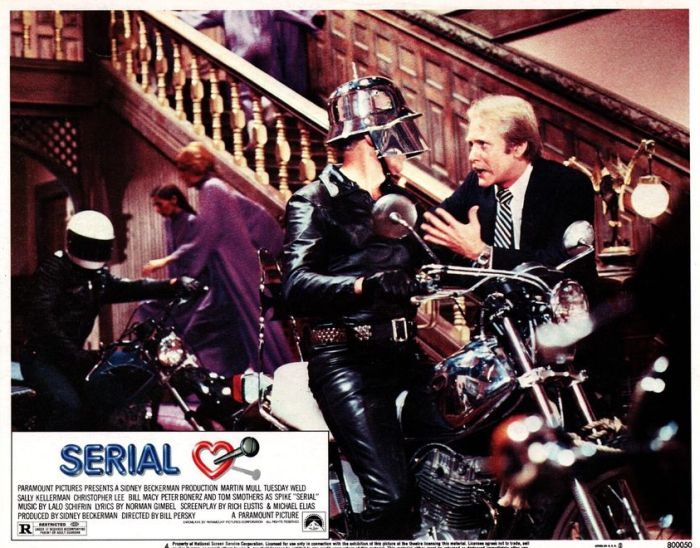 The result is a film that Vito Russo aptly noted in Celluloid Closet was the “perfect anti-feminist, homophobic statement in to usher in the age of Ronald Reagan.” And it’s true, Serial does accidentally predict the upcoming Yuppie backlash. It really was an accident, too; Serial is far too clueless for this to have been deliberate. With this comes the standard tropes of men being victims of women out of control, where being out of control means having free will. The women in Serial agree; they just can’t stop calling each other twats and cunts for doing things that men do without a second thought.

The most telling example happens about halfway through the film, when Harvey learns Joanie has gone off to join a cult. At a bar when he hears the news, he gets nasty looks from patrons who overhear that he’s living with a 19-year-old “nymphomaniac.” He laughs it off, but seconds later is seen on his now-ex-wife Kate’s doorstep, where she snarks that he’s been hard to find, probably because he’s busy driving his girlfriend to Girl Scout meetings.

“You still get being liberated mixed up with being a bitch,” he says back to her in a line that director Persky, 15 years out from the only good thing he ever did, clearly thinks is important and vital to the plot, hell, maybe to the world itself. After a significant pause — someone, somewhere assumed there would be scads of cheers and laughter from theater audiences all over the world — Kate apologizes for her tame joke.

Gays don’t have any better time of it than women do in Serial, being hilarious and weak and perverted and, just like the women, there for Harvey to eventually alpha male all over in a sad attempt at expressing his dominance. There are at least two scenes with the dog Elton John that appear to have been dubbed over to tone down homophobic jokes, which is upsetting and a little bit impressive, because it means the already homophobic film once existed in an even more homophobic edit. There are a number of racist gags involving black people, Asians and Native Americans. One joke is that a Native American is wearing tennis shoes. Oh, my sides! Will I ever recover from such hilarity?

The problem isn’t that Serial is offensive, it’s that it is lazy. Bone lazy. There’s nothing inherently dull about culture clashes or stunted emotions or wacky hippies, but Serial makes all these things very, very dull, which in turn makes the offensiveness stand out because it’s the only thing in the movie with any emotional content for the audience to react to. It’s not quite Maltese Bippy levels of offensive but it gets so close at times that it makes the film almost impossible to watch. You want to bask in Martin Mull’s perfect delivery of this Star Trek line but you can’t stop thinking about how much the movie really thought the least nasty character in the film deserved to be traumatized at her husband’s funeral because she was maybe a little bit of a flake.

Serial has been released on Blu-ray from Olive Films in a print that looks better than any other film of 1980 that I’ve seen on Blu. The picture is a little grainy at times, surely from the 35mm source material, with the occasional damage that points to a lack of restoration, but the gorgeous scenery and outdoor shots are amazing. This is a bare-bones release with no subtitles.