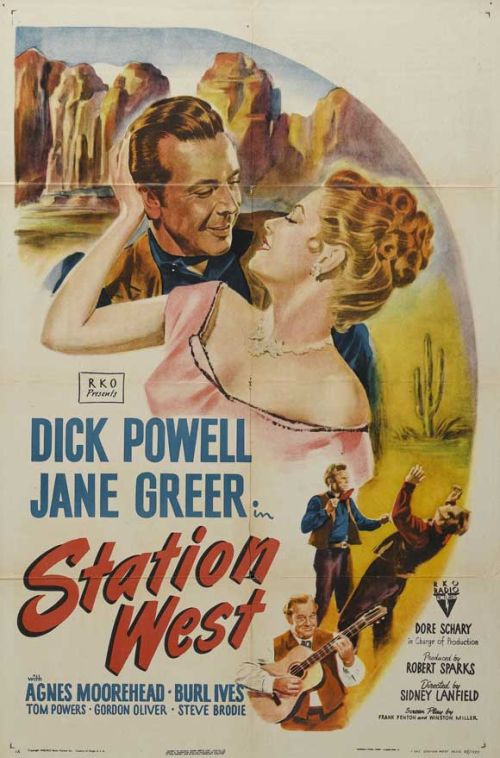 It’s the 1880s, and two Union cavalrymen guarding a shipment of gold have been murdered, their valuable cargo now missing. Captain Iles (Tom Powers) and his ultra-competent lady friend Mrs. Caslon (Agnes Moorehead) send for undercover Army officer Haven (Dick Powell) to investigate the crime. The second he rides into town, Haven saunters into the local saloon and house of ill repute, immediately irritating the suave gambler known as Prince (Gordon Oliver), and Charlie (Jane Greer), the saloon’s beautiful chanteuse. Haven soon learns that the business is owned by Charlie, who not only has Prince on her payroll, but several local thugs and the slightly sketchy lawyer Mark Bristow (Raymond Burr).

Thus opens Station West (1948), an odd little psychological Western with a plot that probably sounds pretty familiar to long-time SBBN readers. That’s because it’s essentially the same plot as Raiders of Ghost City, only with the femme fatale split into two characters and no cutaways to The Department of Chinbeards back in D.C.

Not to imply anything untoward, but Ghost City was written in 1944 by Luci Ward and Morgan Cox, while Luke Short’s novel Station West was published two years later; when it was made into a film, they managed to cast not one, not two, but four actors from Ghost City: Regis Toomey, perennial Western background dude Dan White, plus Monte Montague and Joey Ray.

And just like Raiders of Ghost City, Station West starts to completely lose the plot about one-third of the way in. Haven joins up with Charlie’s crew, having decided that the saloon is the vortex of all suspicious activity, but Captain Iles and Mrs. Caslon question Haven’s loyalty. Or at least that’s my best guess as to what happens, because it seems some dialogue, maybe even entire scenes, are missing. Motives go unexplained, actions make little sense… 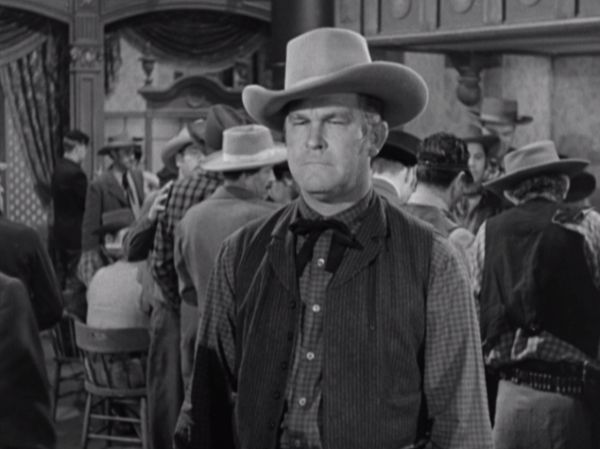 and Guinn “Big Boy” Williams stands around glowering at everyone.

This ambiguity is most certainly deliberate, as Station West means to be a film noir that just happens to be set in the American West. While the link between Westerns and noir films is well documented, very few films have been as literal as Station West in borrowing tropes from one genre and superimposing them onto another. In fact, one could argue that most of the films guilty of this were made in 1947 and 1948, and were based on Luke Short novels, which, for a brief period, were very popular in Hollywood.

Probably the most successful of the adapted Short novels were Ramrod (1947) and Blood on the Moon (1948), both delving into noir tropes but without being wholly wedded to them. Station West, like Ramrod and Moon, cast actors noted for their appearances in noir films, and featured screenplays written by noir writers: Frank Fenton had just co-written Out of the Past, while Winston Miller had co-penned Danger Street and My Darling Clementine.

Station West has a solid pedigree, but never fully gels as the dark, psychological Western it wants to be. Powell’s got the requisite bitter sarcasm down, though, especially early on when he’s trying to irritate everyone in town to prove he’s a badass. After several minutes of shenanigans, a Union enlisted man suggests teaching Haven some manners, to which he replies, “If you could teach me anything, you wouldn’t be in a uniform.” Damn, son. 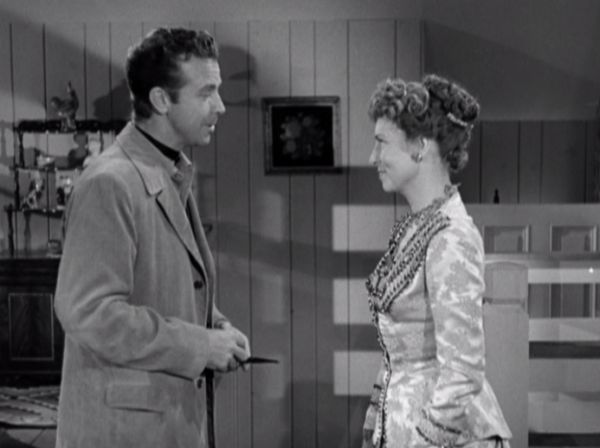 Powell and Greer work well together, but the real sexual tension is between Powell and Moorehead. Note that this text is not very sub.

Station West has got the cinematic chops and the double-crosses it needs to be a noir experience, too, but that never quite adds up to much, mostly because the double-crosses don’t make any sense unless you approach them as a Western’s attempt to look like a film noir. Equally distracting from the psychological angle of Station West is its anti-communism propaganda early in the film. It’s more subtle than 1950’s Bells of Coronad, noted by some to probably be the first anti-communist Western, and it gives up the propaganda pretty early on, but it’s noticeable nonetheless. The propaganda is replaced with the usual noir-is critique of the sociopolitical climate in post-war America, but the feel of the opening act seems almost apologetic for the bitterness to come. 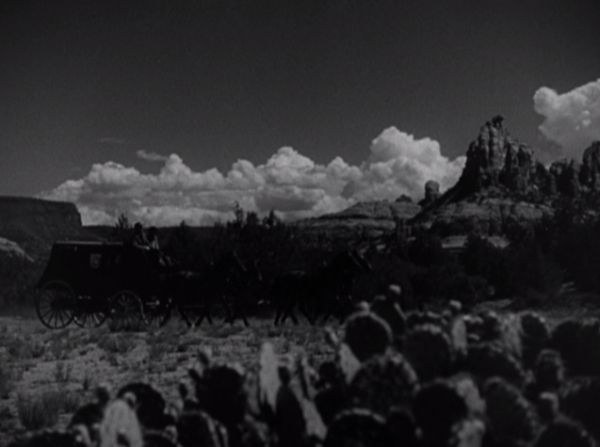 This nighttime wagon ride is lovely to look at, with the wagon and horses blending into the Sedona outcrops, but I question how effective the deep blacks of noir really work in an American Western.

Jane Greer gives a terrific performance as Charlie, very self-assured and nuanced, though apparently Greer had a terrible time working on the film. Her role was originally meant for Marlene Dietrich and director Sidney Lanfield, angry at not getting his first choice of actress, was a hellion to Greer. He apparently treated Moorehead similarly, and she campaigned for — and got — a different director to work on her scenes.

Warner Archive has just released Station West on made-on-demand DVD, in the 79-minute re-release version from 1954. (The IMDb says 1957, but all the re-release memorabilia for sale is dated 1954, so consider the IMDb info to be a typo.) This is the version that shows up on TCM now and again, as well as the version that was released in France on DVD many years ago.