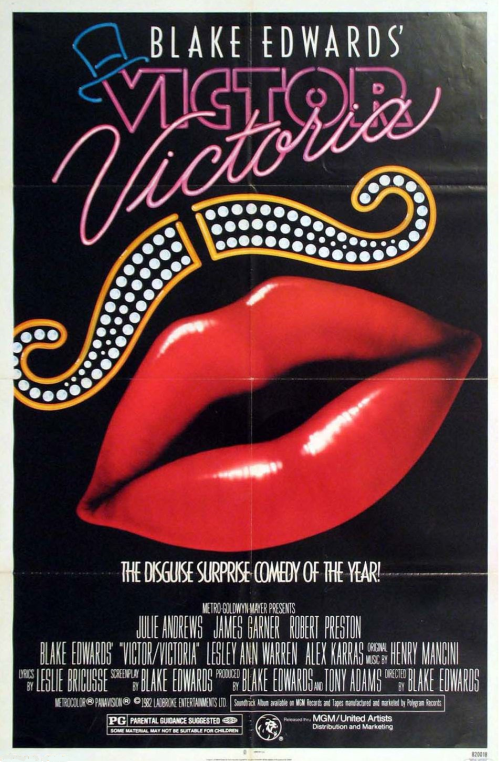 A note: there is an error in some of the early Victor/Victoria Blu-rays released, where a scene in the first “Shady Dame of Seville” number has been replaced with the wrong clip. If you purchased one of the early copies of this film, you can go here to the Blu-ray.com forums for instructions on how to get a replacement that has this error fixed.

It’s winter in Paris, 1935, and Victoria Grant (Julie Andrews) is a talented coloratura soprano without a dime to her name. Unable to find work and increasingly desperate, Victoria comes perilously close to paying her rent with her body, until a wily cockroach interrupts the proceedings. Stashing that cockroach in her purse, Victoria heads to the local diner, orders one of everything on the menu, and plans to get out of the bill with some clever bug placement. Local entertainer Toddy (Robert Preston) sees her at the restaurant and cheerfully joins in on the scheme.

In fact, all of Victor/Victoria (1982) is gorgeous, thanks to both Bush’s cinematography and the dedication to producing large-scale musical extravaganzas that cinema hadn’t indulged in since the late 1960s, as well as songwriting and choreography reserved for big-budget Broadway affairs. Equal parts hilarious, touching and romantic, Victor/Victoria is one of the most entertaining films to come out of the 1980s, and one of the best films of the last few decades.

A remake of the Weimar Republic screwball comedy Viktor und Viktoria (1933),Victor/Victoria really gets going when Toddy hits upon a plan to make Victoria into Victor, a female impersonator, which requires Victoria to pretend to be a man in real life to really sell the scheme. She does this… well, you can’t say she’s happy about it, necessarily, but she’s good at it, and success comes quickly, as does the fame and cash success always brings.

Also arriving is King Marchand (James Garner), a Chicagoland lawyer with a hot-to-trot moll named Norma (Leslie Ann Warren) and a beefy bodyguard named Squash (Alex Karras). Both Toddy and Victor find King attractive; King, in turn, finds Victor attractive, which is why he can’t be convinced that Victor is really a man. Shenanigans and romance follow, with Toddy delivering some of the best and sauciest one-liners since the pre-Code Marx Bros. days.

Victor/Victoria happily embraces the been-there-done-that tone of a film that, fifty years after the original, knows its plot should no longer be scandalous. The genius of the film’s nonchalant sexuality is that gender-bending, drag and homosexuality were still salacious in 1982, and Victor/Victoria shows better than any other film before or since just how ridiculous that is.

That’s a bit ironic, considering the lengths Victor/Victoria goes to in order to make it clear that Victor is not, on any level, a man, thus neutering almost all of the gay and trans elements in the film. The actual female impersonators look grotesque and ridiculous in comparison to Victor, and one can wave that away as a desire to make the lead look more attractive by comparison, and to make her male drag more convincing. Less easy to ignore are the broad stereotypes the supporting gay males are saddled with, but again, much of this is mitigated by Robert Preston’s and Alex Karras’ fine comedic performances, subtle in all the right places. There’s a broad spectrum of personalities for every sexuality in Victor/Victoria, which was probably an accident borne from trying to appease scaredy-cat studio heads, delicate Middle Americans and sophisticates alike, but it gives the film a timelessness that makes it still enjoyable nearly 35 years later.

But — and there are a lot of “buts” in Victor/Victoria, the kind with one “t” — there’s the oft-shown scene where King, played by James Garner, who we all knew by 1982 was one of those freakishly liberal Hollywood types who probably thought people deserved rights and stuff, and also had no problem with The Gays (gasp!), tells Victor that he doesn’t care if he’s a man, he’s attracted to him no matter what, and kisses him. Of course, he only tells Victor that after seeing her nude, without her permission or knowledge, to verify she’s the correct sex for him to kiss.

That’s a lot to overlook in terms of gender and sexual politics, and obviously needs to be contextualized within the time it was shown, though there is a very interesting, implicit closet metaphor being invoked in King’s otherwise typical peeping tom act. The same subtle closet metaphor appears again when King is having sex with Victor and is interrupted by Squash, who busts through that bedroom door like Jack Torrance, or the Kool-Aid Man. Seeing Victor (without knowing he’s also Victoria) in bed with King brings about Squash’s revelation that he’s gay, which confounds King in a way it really shouldn’t by that point, but needs to for the sake of the story or else most of the audience would have been lost. The ensuing discussion seems to be the exact thing that many reviewers at the time took umbrage with: the reveal that Squash, the rootinest, tootinest, shootinest hombre this side of the Pecos, was gay was frequently met with accusations of Gay Agenda Most Foul.

John Simon, that notably calm critic who has never once fallen to the sweet siren call of hyperbole

That wasn’t a particularly scandalous comment to make back in 1982, for what it’s worth, but I recall my good pal, the late film critic John Harkness, saying something similar, though far more kind, about Brokeback Mountain in 2005 and causing a hell of a stir. I’d link but the internet is far more forgetful than common wisdom tells you, and it’s all forgotten now, but it does seem strange that, 23 years after Wolcott’s comments — representative of a lot of critics at the time — it was a sentiment still being expressed, even if more naively than maliciously.

Victor’s first performance in the film is a real show-stopper, the famous “Le Jazz Hot” number, and the film boldly includes a really clever (in a filmmaking sense) series of edits focusing on King and Toddy in the audience, and all without making us feel that we’re missing too much of Andrew’s fantastic stage presence. Prior to this moment, Robert Preston, who had been the ersatz male lead, essentially transfers the lead over to James Garner, the top male billed in the film. This happens as Toddy stands in the back of the theater watching Victoria’s debut, while King, along with his moll and bodyguard, enter the room and walk down to what is obviously VIP seating in the center front. Toddy is pleased with Victoria’s performance, but that’s not particularly interesting. What’s interesting is King’s reaction: this big matinee idol hunk of a man with an overstuffed, clown-faced girlfriend is attracted to Victor, and is flustered when he realizes she is really a man.

From that moment on, King is the lead and Toddy moves to supporting actor, which seems a bit unfair, but at least confers the kind of freedom on Toddy’s character that supporting parts enjoy but leading roles (at least in 1982) cannot indulge in. And true to form, Toddy’s very next scene is him gently exposing Norma’s bourgeois ideas of homosexuality, in a way that even today is a bit refreshing.

But Norma’s enlightenment on the issue is limited, as is Norma the character, though she plays an important role in that closet metaphor that gives the character of King depth and interest. Norma is a female impersonator in her own right, heavily processed and with the kind of hair and makeup seen on no one else in the film except the gay male dancing extras in drag. Norma is the kind of woman King is attracted to, and the kind of women he likes are apparently parodies of womanhood or, in Victoria’s case, manhood. Maybe that somewhat mitigates his behavior; maybe that indicates that he’s more confused than he is heterocentric, and willing to accept people with atypical (for the 1920s, less so the 1980s) gender presentations.

What’s great about Victor/Victoria — and most regular readers of SBBN will be shocked to hear me say this — is that you can watch the whole damn thing without needing to think too much about these sorts of issues. It falls firmly in the Slightly Dated But Not Really Troubling column [2] and can be enjoyed as the romantic comedy it is. It’s chock full of lengthy scenes and small moments that are as endearing as they are impressive, great performances, fun times, nifty music… there is nothing here you will not love.

And the film looks just completely fucking amazing on Blu-ray. There’s the error mentioned at the top of this article, only in the first few discs printed, but beyond that is a clear, crisp image with a touch of early-80s grain and gorgeous color saturation. The era-typical greens and browns are perfect, and the bright primaries and deep blacks that prove this is a film from the 1980s are true and solid without distortion.

The backstage meet-and-greet after “Le Jazz Hott” is probably the least interesting part of the film, in terms of framing and composition — I mean, there’s that fantastic moment in when Victor slicks back his hair self-consciously, but afterward, you have to admit the staging and cinematography are a bit bland. My husband walked into the living room during that scene and just stared and gaped, and even took a couple of steps toward our obnoxiously large television [3] and said that it felt like he could just walk into the party. He’s right, it looks that good.

Warner Archive released Victor/Victoria on Blu-ray last month, though it’s currently listed as “out of stock” due to that glitch in the master print they used — I suspect it was an artifact from made-for-TV editing, a print of which was even shown on TCM back in the day. Anyway, when Warner Archive restocks this Blu-ray, you should get it. You want it. You need it.

—
Sources:
[1] This is 100% a lie.
{2] Where are these columns, anyway?
[3] Ostentatious but given to us for free, so I try not to be embarrassed about it, but I still call it “Franks 2000-inch TV.”
[4] Vincent Canby loved this movie to bits.
All screenshots are from the original DVD or Blu-ray. While they accurately represent the quality of the film, some compression of the image may have occurred when formatting these screenshots for this article.