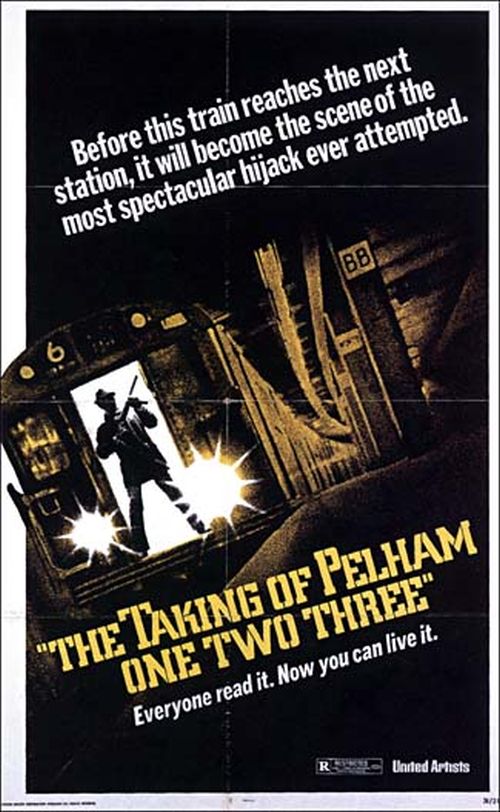 Just after 2:00 p.m. on a cold winter day in New York City, a former mercenary and his accomplices take one subway car and 17 people hostage, demanding a cool million dollars from the city for their release. The leader (Robert Shaw), under the alias of Mr. Blue, relays his demands by radio to Lieutenant Zachary Garber (Walter Matthau) of the New York Transit Authority, while henchman Mr. Green (Martin Balsam), a former subway conductor, drives the train, and Mr. Grey (Hector Elizondo) goes all wild card and starts shooting well before he’s supposed to. Given only an hour to get the money to Mr. Blue before he starts to kill the passengers, Garber and the NYPD race against time to save the hostages.

Once an underappreciated film, The Taking of Pelham One Two Three (1974) is now a cult classic, in part because of what must be one of the most widely-known bits of cinematic trivia: Quentin Tarantino borrowed the use of colors as aliases from Pelham for his film Reservoir Dogs (1992). But Pelham is far more than mere trivia. This is a film that boasts one of the most solid casts of character actors to ever hit the silver screen, including Julius Harris, Tony Roberts, Dick O’Neill, Doris Roberts, and Jerry Stiller and his magnificent hair. There’s humor, there’s tension, an absolutely bonkers plot and the kind of look at a grimy yet somehow romantic old New York City that we’ll never see again.

The kind of things that would have destroyed any other gritty heist film elevate Pelham to something really special. One of Peter Stone’s last good screenplays (the last would be 1978’s underrated Who Is Killing the Great Chefs of Europe?), Pelham is a long way from his fluffy 1960s work (Father Goose, Charade, Arabesque), and thank the gods for that. Still, even the darkest of Stone’s scripts tend to be good-natured, and this adaptation preserves the humor of the original novel without weighing it down under several layers of subway permagrime. Joseph Sargent’s made-for-TV-movie sensibilities result in a lot of flat, workmanlike angles with the subjects dead in the center of the frame, which master cinematographer Owen Roizman, fresh off The Exorcist, turns into brilliant moments of blunt realism.

The long shots on the streets of New York are fantastic, the cop cars zooming down the center of the frame, the shadows of buildings and huge crowds filling the edges, alternately interested and irritated at what’s going down. What was going down for those crowds, of course, was the filming of a movie, and Pelham wisely doesn’t do too much to hide that fact, because the heist at the center of the film is unbelievable. Nobody believes it! There are multiple characters who exist only to say, repeatedly, that they don’t understand what’s going on, and the little they do understand doesn’t make sense. That’s life, right? It’s fantastic.

The Taking of Pelham One Two Three didn’t do particularly well at the box office, and Molly Haskell’s repulsive review in The Village Voice goes a long way toward explaining why. Written back when being edgy meant being as offensive as possible, Haskell’s main complaint was that no one would pay even a dollar to help save the lives of “screaming mothers” and “superfly fags,” as the 17 passengers on the hijacked subway car were a “rancid assortment of useless humanity.” The only way a hostage film works is if the victims are high class and, you know, worthwhile, but these guys? They’re not suffering from problems, they are the problem, and who wants to see that?

Not New Yorkers, claimed Haskell, though it turns out the film did quite well in New York, better than elsewhere in the country. And, to the consternation of critics who complained the film was unrealistic or worse — New York Magazine specifically called the character of Al, the mayor, in Pelham “tasteless“– the film presages Mayor Ed Koch by a good four years.

But if Koch the character resembled Al the character, Koch the mayor didn’t. Wildly popular, the Koch administration in 1977 signaled an improvement in crime rates and the quality of life, though his methods were controversial and the effects hardly immediate. Just three years earlier, however, in the world of Pelham One Two Three, New York City was known for little more than the crime, the smell, the corruption and the poverty, and no one had really cared to do much about it.

When the sniffly and ineffectual Mayor Al suggests the hijackers just be allowed to keep the subway car because the city doesn’t have a million bucks for the ransom, it’s a joke, but it’s not really a joke. A year after Pelham’s release, New York City went bankrupt and, as the New York Daily News put it, President Gerald Ford’s refusal to help was tantamount to him telling the metropolis to drop dead.

Pelham takes place during some dark days for the city, yet it stands in sharp contrast to the New-York-is-lost films that would come a few years later, films like Wolfen and Escape From New York and even The Warriors, a film that Ronald Reagan reportedly (and somewhat upsettingly) really enjoyed. Pelham One Two Three has… well, it’s not hope, exactly, but a genial acceptance of humanity, a bittersweet, Kurasawa-esque notion that, even when everything is falling apart, things will still be okay.

In a nice bit of subversion, Garber is one of the least tolerant characters in the film, but it’s a superficial intolerance. Sure, he gets confused because guys with long hair look like girls and black police inspectors don’t “sound black” over the radio — the movie is so set on you expecting him to be an Archie Bunker type that Garber even calls someone a “meathead” in his opening lines — but when dispatcher Frank Correll suggests that the 17 hostages aren’t worth saving, Garber points out what should be obvious: yeah, they are worth saving, and you’re a complete asshole if you think otherwise.

The fact that it’s not obvious is what drove much of the movie’s plot back in 1974, and in that, Molly Haskell was right. The film succeeds in creating tension where there rightly should be none; between Pelham’s dark humor and some truly insufferable members of the hijacked 17, it would have been too easy to make their lives disposable.

But Pelham doesn’t take the easy way out. That shrugging distance between ourselves and the captives isn’t just part of the film’s entertainment value, it’s integral to the plot. Mr. Blue is a man of the world, and he surely knows that cynicism, not time, as the film tells us repeatedly, is his biggest enemy here. He goes into the heist knowing the lives of the average subway-goers aren’t worth a whole hell of a lot, and asks for a relatively small amount accordingly. When he reveals to the passengers just how much (or, more accurately, how little) he asked for, they learn what he (and we) already knew.

Speaking of entertainment value, The Taking of Pelham One Two Three is one goddamned entertaining film. Pelham is also exciting, especially for a film that consists largely of guys talking into radio mics at people they’ve never seen. Matthau is tough and confident — so confident, in fact, that he handily pulls off wearing the most beautiful, outrageous outfit, two yellow and red catastrophes duking it out with each other across his chest throughout the entire film. Shaw is perfection, at least in his affect; sharp-eyed viewers will notice he occasionally schmutzes up the radio operation and other bits of business. Martin Balsam proves again that he was one of the best American actors we have ever seen. Fellow actors and critics can do one hundred million voiceovers for TCM, insisting that Tom Hanks or Kevin Costner or Spencer Tracy were the epitome of actors who make the craft look effortless, and they will always be wrong, because that honor goes to Martin Balsam, full stop.

Kino Lorber has just released a 42nd Anniversary Edition of The Taking of Pelham One Two Three on Blu-ray, which goes on sale today. Included are interviews with Hector Elizondo and editor Jerry Greenberg, as well as an interview with David Shire, the composer responsible for what is one of the best action movie scores of the 1970s, if not of all time. Audio commentary with Pat Healy and historian Jim Healy is also included, as well as the trailer. The image is exactly what you would expect a gritty 1970s film to look like, filled with delicious, nutritious grain that resolves nicely during playback and a solid transfer that brings out the New York neutrals. It’s the best this film has ever looked, and in fact, though I have seen Pelham about 10 times — it’s one of my favorite films — this was the first time I’d ever noticed that the hijackers’ hats were the same color as their names. Mr. Blue’s hat is particularly spiffy.